The end of “no promo homo”: Utah could become the first Republican state to strike down anti-LGBT law

With only two dissenting votes, the GOP-dominated statehouse in Utah just reversed an anti-LGBT education law 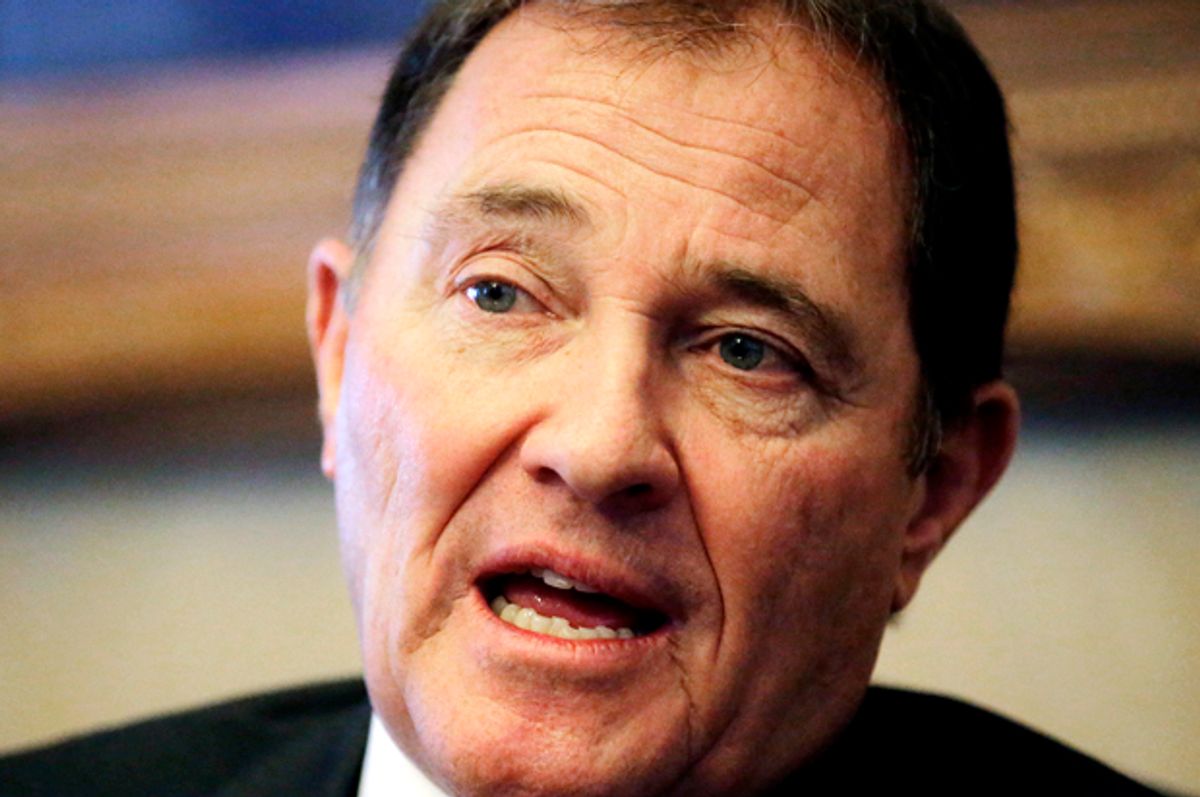 Utah could become the first Republican-dominated state to strike down an anti-LGBT law that prevents teachers from addressing topics related to homosexuality in schools. Last Wednesday the state’s Senate voted 24 to 1 to repeal its “no promo homo” legislation, following a similar 68-to-1 vote in the House of Representatives. Senate Bill 196, the proposal to repeal the old law, now sits on Gov. Gary Herbert’s desk. Despite his opposition to marriage equality and belief that homosexuality is a choice, Herbert is widely expected to sign the bill.

This is the second time in three years that advocates have passed legislation in support of the LGBT community in one of the country’s most conservative states. Both houses of the Utah legislature are controlled by the GOP and more than 85 percent of representatives are Mormon, a religion with a leadership that has claimed homosexuality is a “grievous sin.”

But two years ago conservatives worked with LGBT leaders on the state’s first milestone toward equality: Utah became the only legislature with a Republican majority to pass nondiscrimination protections for the LGBT community. That law, enacted in 2015, prevents people from being fired or evicted because of their gender identity or sexual orientation (although a healthy religious exemption remains for faith-based groups). The nondiscrimination effort was backed by the Church of Jesus Christ of Latter-day Saints and represents the first time that religious group has publicly expressed support for pro-LGBT legislation.

Troy Williams of Equality Utah, the LGBT advocacy group promoting Senate Bill 196, said the successful compromise has paved the way for further cooperation on both sides of the aisle.

“This is unfortunately not what’s happening in other states,” said Williams, who serves as the organization’s executive director. “That’s been the biggest challenge that we’ve been seeing across the country — collaboration isn’t happening. It’s us versus them. In Utah, we chose to go a different way. We chose to sit down together and work together on these issues and that makes all the difference.”

The challenge to the state’s “no promo homo” laws began last year when Equality Utah and the National Center for Lesbian Rights filed a lawsuit on behalf of three students who allege that the legislation prevented them from being treated equally in schools. One student, referred to as “John” in the suit, claimed in court briefings that a classmate “held [his] hand to a hot metal slide” and burned it. “He screamed for help and the boy finally let him go,” according to the documents. The suit asserted that because he was gender nonconforming, his teacher denied him first aid. The teacher allegedly felt that helping this injured student would send a message it was OK to be like him.

Clifford Rosky, a law professor at the University of Utah, alleged that when the student’s parents met with school administrators to discuss the incident, officials claimed they couldn’t protect the boy. He would have to be home-schooled. “His mother quit her job to home-school her son,” Rosky said. “This is not a wealthy family. It had a profound impact on their income.”

Rather than making the school district safer for other students like John, the lawsuit alleges, the district doubled down on discriminating against gender nonconforming students. The boy wanted to go to school dressed as Cinderella for Halloween, and after John’s parents pulled him out of his classes, administrators adopted a regulation saying that no students would be allowed to dress up as someone of the opposite gender for the holiday. If they did, they would face suspension.

Williams noted that these sorts of incidents happen all the time in Utah. “Another one of our plaintiffs was simply holding hands with her girlfriend and was called into detention for public displays of affection, while her straight counterparts hold hands in the hallways all the time,” he said. “Time and again, we’re seeing ways in which queer-identified students are singled out and treated differently.”

“No promo homo” legislation was enacted in the early 1990s in the wake of the AIDS crisis. According to Rosky, if educators were required to address in the classroom topics related to HIV, many Republican-dominated states would allow it only if the curriculum didn’t become a platform for “homosexual indoctrination.” The choice, Rosky explained, was that conservative parts of the country either didn’t teach about homosexuality at all or students would only “learn bad things about it.”

That mindset led to the passage of extremely anti-LGBT legislation in states like Arizona, Louisiana and Mississippi, where “no promo homo” laws remain on the books. For example,  Alabama's state code declares that “classes must emphasize, in a factual manner and from a public health perspective, that homosexuality is not a lifestyle acceptable to the general public and that homosexual conduct is a criminal offense under the laws of the state.”

Although LGBT rights advocates frequently claim that eight states (including Utah) have “no promo homo” or “don’t say gay” laws, such legislation has been narrowly defined as laws that keep teachers and districts from addressing issues related to gender identity or sexual orientation in the classroom. But there are other ways that school policies can leave out LGBT students. Rosky said 20 states have anti-LGBT language in their curriculum for kindergarten through grade 12.

“The issue is twice as big as people realize,” claimed Rosky, who has penned an upcoming survey for Columbia Law Review on the subject.

“More than 25 million children — nearly half of all school-aged children in the United States — are attending public schools in these 20 states,” Rosky wrote in the appropriately titled “Anti-Gay Curriculum Laws.” “In half of these states, teachers are affirmatively required to teach anti-gay curricula in all public schools. In the other half, teachers may choose between offering students an anti-gay curriculum or providing no health, sex, or HIV education at all.”

Added Rosky in a phone interview, “Some of them say you must promote heterosexuality or marriage between opposite-sex couples,” noting, “others say you have to promote abstinence until marriage, but in those states, marriage is still defined to exclude same-sex couples — like in Tennessee.”

These policies have an especially harmful impact on LGBT students. Andrew Peters, the state policy manager for Gay, Lesbian, & Straight Education Network, claimed that with such policies kids are more likely to hear homophobic remarks in school or to be bullied by other students. As a result, these kids report higher rates of depression and drug use, while experiencing lower self-esteem and performing more poorly in school. Because students in “no promo homo” states are less likely to report harassment they face, it can be harder for educators to support them — if they're even permitted to do so.

“It’s so important that students are able to learn in an environment that affirms their identity,” Peters said. “These laws say to students that they are not accepted and that they are invisible.”

This is a concern for people in a state like Utah, where Rosky claimed that the youth suicide rate “has quadrupled” over the past 10 years. Mama Dragons, a support group for LGBT youth, estimated that 32 young people took their lives from November 2015 to January 2016. While no one would claim that the “no promo laws” are solely to blame for this, Rosky said eliminating the legislation would mean there would “no longer be obstacles” to teachers supporting vulnerable LGBT students — empowering them to prevent harassment and treat all students equally, no matter their orientation.

“That was our whole motivation to tackle this law,” Williams said. “We were seeing and attending too many gay and transgender funerals.”

Passing SB 196, though, won’t end all policies adversely targeting LGBT students in Utah. Rosky said that the state’s Board of Education guidelines state that schools cannot “encourage criminal conduct.” Utah still has laws on the books that criminalize sodomy, as do 11 other states. Even though the Supreme Court’s Lawrence v. Texas decision struck down statewide prohibitions on homosexual intercourse, thus effectively overturning the Utah law, the obsolete sodomy ban could still be used to harm LGBT students.

Should Utah successfully repeal its “no promo homo” law, though, with the governor’s approval, it would be the second state to do so. Blue state California, which had passed an anti-LGBT curriculum bill in 1988, struck down its legislation in 2003.

No other repeal efforts have been announced in other states.