Undoing the voters' will: Democratic measures to raise minimum wage are being met with court challenges

What will of the people? In three states, corporate interests try to undo new minimum wage laws enacted by voters 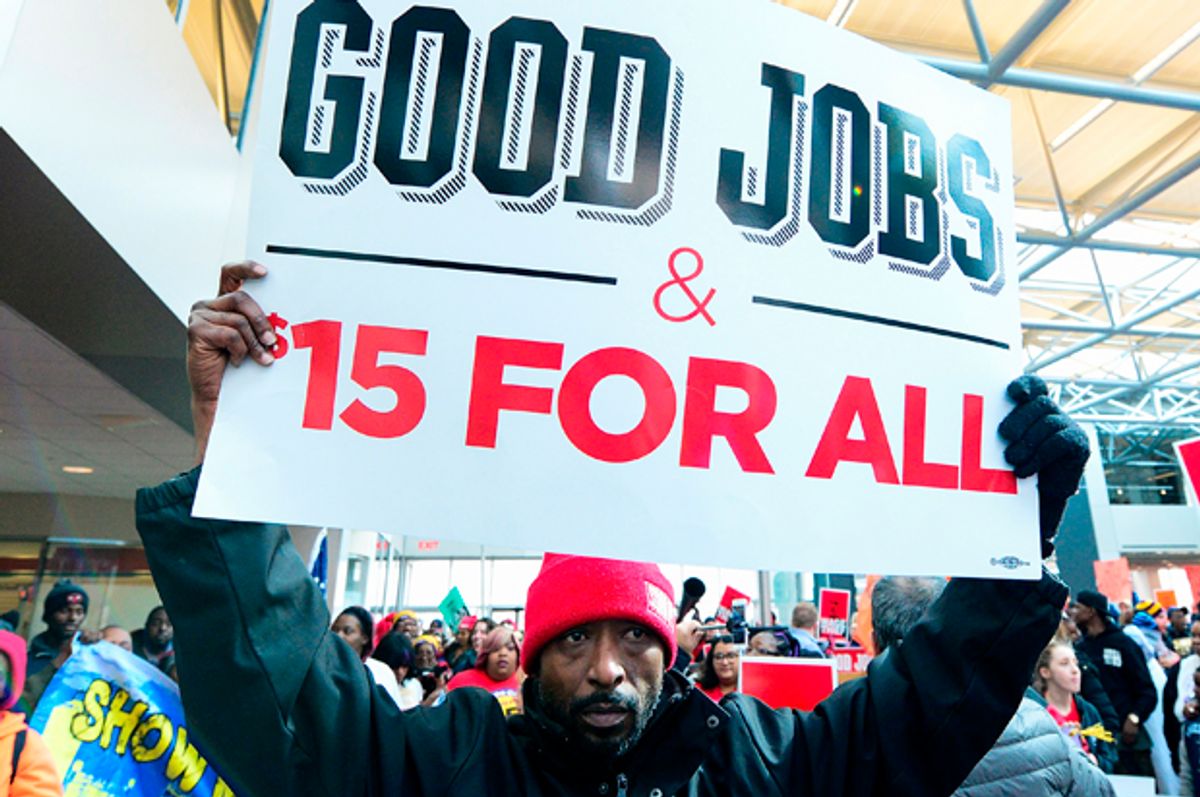 Last November voters in four different states voted overwhelmingly in favor of citizen initiatives to increase the minimum wage that employers must pay their workers. Despite losing at the ballot box, however, local business associations in three of those states are looking for ways to stop the measures from going into full effect.

In Arizona and Washington state, opponents of increasing the minimum wage are challenging the victorious initiatives in court. In Maine, business groups are pressing the state legislature to override one.

Republican elected officials in all three states have been supportive of these efforts. Even some Democrats have signed on as well.

"Whenever we put these issues in front of voters, they choose to side with us," said Jonathan Schleifer, executive director of the Fairness Project, a political group that helps citizens place minimum wage initiatives on state ballots. "What these corporate interests are trying to do is to override the will of the people."

Beyond trying to override the ballot votes, opponents of increased minimum wages have also begun trying to place restrictions on citizen initiatives.

That's noteworthy because ballot initiatives were instrumental to kickstarting the modern conservative movement in the 1970s. But once progressives figured out that ballot measures could be used to enact policies that they favor, conservatives appear to have changed their views.

"They're so afraid of what we can do with these ballot initiatives that they are also going to close the door for themselves," Schleifer said in a telephone interview.

Normally, politicians are loath to go against public opinion, but this may be one of those issues where campaign donations could be playing a role.

Maine voters approved the state's minimum wage increase in a 55.5 percent to 44.5 percent vote. In Washington, 57.5 percent of voters supported the measure. Arizona's measure passed with nearly 59 percent support; all but one of the state's counties favored it.

In Maine, business interests are focusing their override efforts on the wages of tipped employees such as restaurant waiters. One clause of Question 4, the Maine ballot measure, gradually increases the lowest amount of money that such workers must be paid until it reaches the same minimum amount as other hourly employees receive.

In December Maine's department of labor, under the direction of Gov. Paul LePage (a controversial Republican with ties to Donald Trump), announced that it was not going to enforce the provision. Nine measures have been introduced in the state legislature to formally overrule the tipped employee provision. Two of them have Democratic co-sponsors.

The legal challenges against the Washington and Arizona initiatives, however, are based on technicalities.

In the Grand Canyon State, the local chamber of commerce wants to invalidate the vote on the grounds that it violates a provision of Arizona's constitution that prohibits ballot initiatives from increasing state spending without also raising the money to pay for it.

Arizona's minimum wage measure, Proposition 206, explicitly exempted state employees, but its opponents are arguing that it would still increase spending because Arizona would have to pay more money to private contractors who must pay higher wages. Defenders of the initiative say that even if that interpretation is correct, the state would be exempted only from being billed at higher rates by such contractors.

The dispute is currently being heard by the state's supreme court. A lower court invalidated the business association's claim that the initiative would cause "undue harm" to corporations since they would have to pay more in wages to employees. According to the court, invalidating the measure would actually cause more harm to individual minimum wage workers than it would to their employers. The state supreme court refused to hear that aspect of the chamber of commerce appeal.

Arizona Republicans have also introduced several measures making it more difficult to gather signatures for ballot petitions. One requires proponents to collect a significant number of signatures in each of the state's 30 counties, while another lets the state legislature re-enact any law that was invalidated by a citizen initiative. Still another would ban initiative proponents from paying people to collect signatures to place measures on the ballot.

In Washington state, meanwhile, opponents claim that the minimum wage initiative passed by voters should be invalidated because its wording contained two separate topics in a single measure. They cite the precedent of a tax-reduction measure that was struck down by the state's supreme court just last year.