Paranoia and cronyism: What makes the White House dysfunctional?

The Trump administration distrusts outsiders and is focusing on loyalty over experience. Here's a partial list 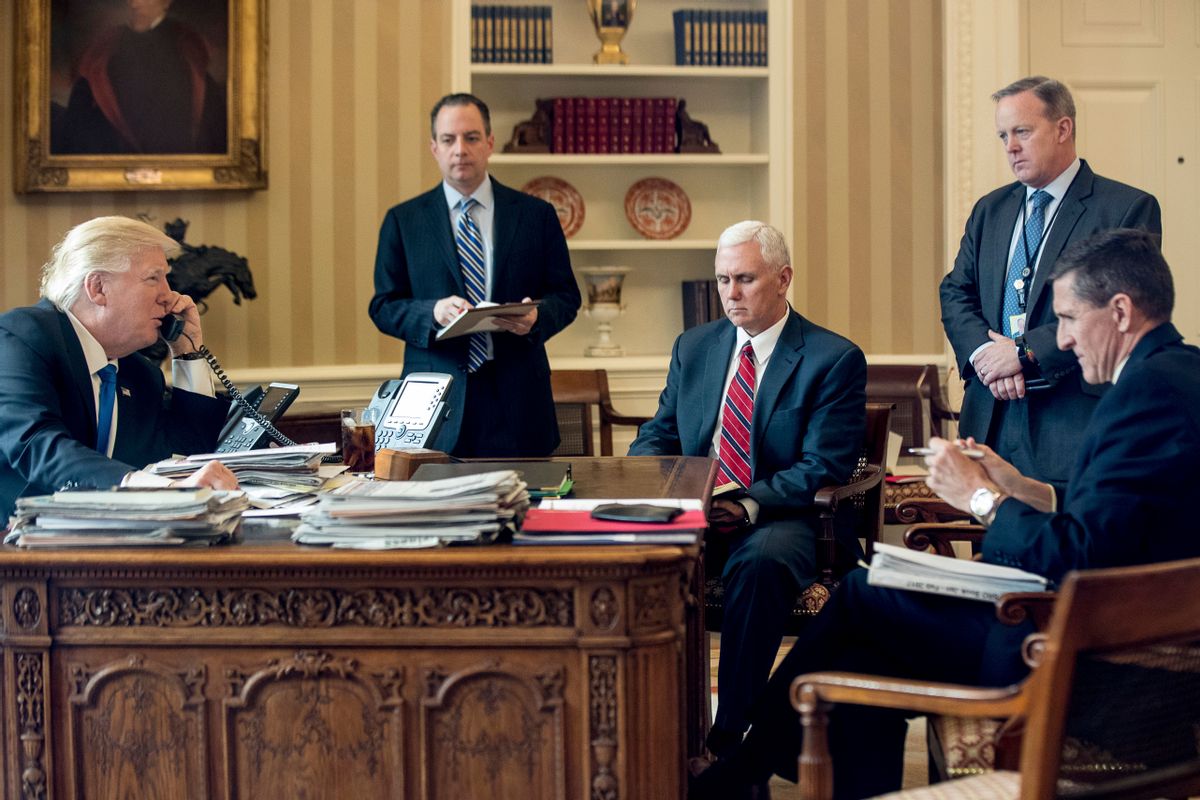 Last month it came out that White House press secretary Sean Spicer had ordered staffers to hand over their phones so he could prove they weren't communicating with reporters. It turns out, based on reports from Politico and The New York Times, that the paranoia has become even worse than that. Here are some of the ways:

1. President Trump may have bugged Trump Tower himself.

Trump has long had a habit of surveilling his businesses and other properties in order to keep tabs on his employees. As Politico noted, this even included "his campaign headquarters, where some campaign aides suspected their offices were bugged."

The campaign headquarters were located at Trump Tower, which he said was "wiretapped" by the Obama administration.

2. Some White House staffers are putting their cellphones in drawers when they get home.

When White House counselor Kellyanne Conway bizarrely claimed that even microwaves could be used for spying, she may have been reflecting a deeper ethos in the executive branch. Staffers have now taken to turning off and stowing away their work-issued smartphones at home to avert potential eavesdropping, leaving their personal cellphones behind when they go to the office nd using encrypting apps that automatically delete messages.

Because many are convinced that the "deep state" has a vendetta against Trump, the WikiLeaks revelation that the CIA can hack a great deal of commonly used technology has only exacerbated this particular strain of technophobic paranoia.

Here's what Politico reported about one White House staffer:

In an interview, one White House aide described the elaborate steps he was taking to shield himself. Once he gets home in the evening, he turns off his work phone and stores it in a drawer because, he said, he believes it could be used to listen to him even when it’s off. If he makes a call during off-hours, he uses a separate, personal phone in an adjoining room, where the stowed work device wouldn’t be able to pick up his voice as clearly.

3. Nobody trusts anyone, and it's partly because the administration's leaders are paranoid.

Nobody seems to know whom they can trust. One Republican with close ties to the White House told Politico that staffers are "mimicking what they’re seeing at the top. . . . Everyone at the top is so suspicious that it trickles down the org chart, so everyone has become paranoid and suspicious."

Staffers spend large chunks of the day trying to figure whom to trust. Because staffers have been fired over controversial comments discovered on social-media accounts, they spend time deleting potentially troublesome material from their own accounts while monitoring others'.

4. Former President Barack Obama is still the boogeyman of the Trump administration.

When one Trump appointee was ruined by past social-media posts (Sid Bowdidge, appointed to the Department of Energy), he blamed his experience on bureaucrats disloyal to the new president who wanted to perform "character assassination" against him.

"A lot of these career folks were put in there over the last eight years, they’re Obama supporters. By and large, they hate Trump," Bowdidge told Politico.

5. There are still no clearly defined roles for staffers.

Part of the problem for Trump is that he has prioritized loyalty over skill for many key positions. Trump's longtime friend Christopher Ruddy, who is chief executive of Newsmax Media, told The New York Times on Tuesday, "Trump doesn’t have a longtime staff of political aides; these loyalists fill that vacuum. He is figuring out who he can depend on."

Even though the Times reported that most of Trump's senior White House aides were unknown to him before his presidential campaign, he surrounds himself with loyalists whenever he can.

6. Trump's acquaintances and friends have received some plum positions.

Keith Schiller, the former part-time security guard at the Trump Organization who became director of security there before being installed by Trump as director of Oval Office operations, personally controls who has physical access to the president.

Omarosa Manigault, who starred in the first season of "The Apprentice," is among the few staffers with the title "assistant to the president" and has walk-in privileges to the Oval Office.

Reed Cordish, who is best known for having been born into a wealthy Baltimore real estate family, was appointed to help bring in Silicon Valley talent to the White House mainly due to the fact that he met his wife through Ivanka Trump, the Times reported.

Then there is the particularly conspicuous case of Andrew Giuliani, the son of close Trump ally and former New York City Mayor Rudy Giuliani. The younger Guiliani works in the White House Office of Public Liaison and Intergovernmental Affairs. Before working in arguably the most powerful office in the world, Andrew Giuliani "worked in sales and marketing at a small suburban New York financial firm," the Times noted.

Giuliani may have been best known for suing Duke University when he was kicked off his golf team for infractions like gunning his engine in the parking lot, flipping a putter and breaking a golf club in anger, and tossing an apple at a teammate's face. In addition to damages, Giuliani demanded the right to use Duke's golf center for the rest of his life.

7. The State Department is a mystery to the White House, and key staffers are getting information from PR sources.

Greenblatt has admitted that he gets most of his information from the American Israel Public Affairs Committee and a Jewish radio program — not the State Department — and reports not to Secretary of State Rex Tillerson but Trump's son-in-law Jared Kushner, whose presence in the White House has also been outsized.