The AHCA's war on women: There's nothing "pro-life" about the Republican health care bill 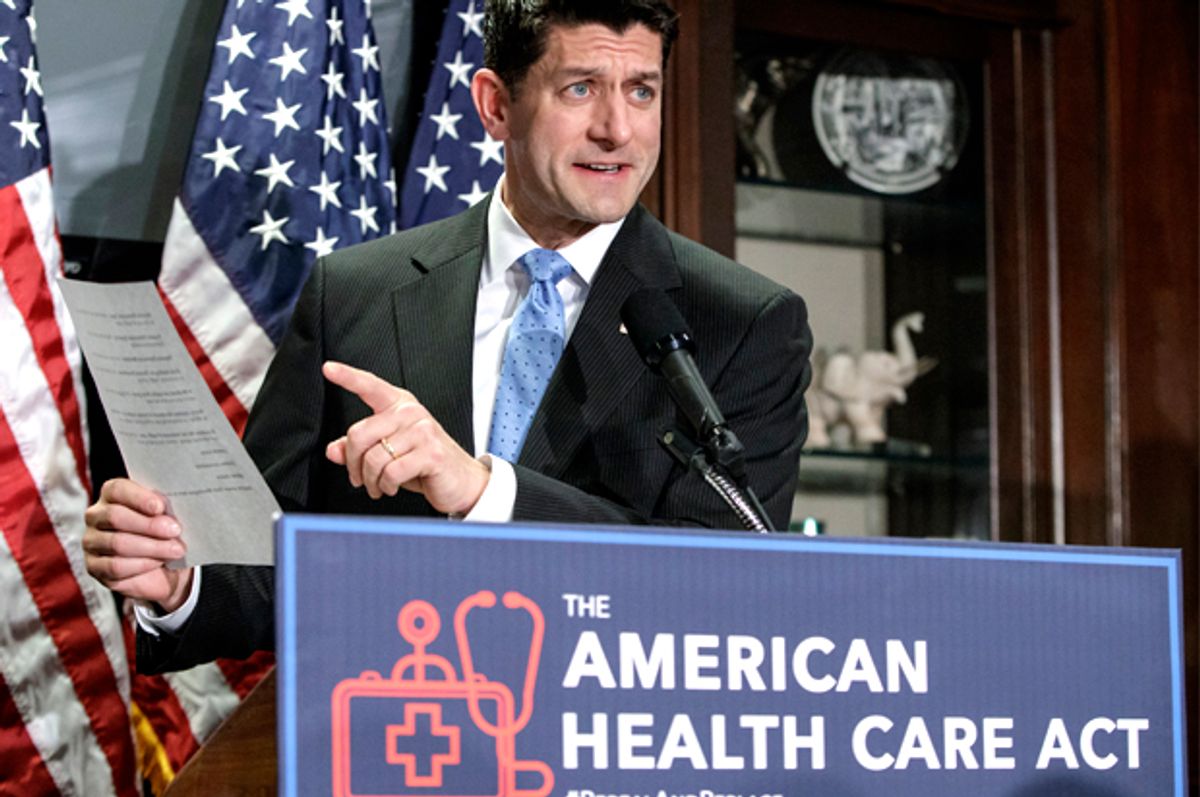 Last week Republicans in Congress unveiled their bill to replace the Affordable Care Act. The proposed replacement is less a health care bill than, as Esquire's Charles Pierce noted, a measure "designed to give a massive tax cut to the wealthiest Americans" and "not concerned with providing affordable health insurance to the most people."

The bill, formally titled the American Health Care Act but widely nicknamed Trumpcare, is also fiercely anti-woman. As I reported last week, the bill attacks women's access to reproductive health care from every angle, undermining not just contraception access and abortion coverage but also making it much harder for women to receive maternity coverage when they do give birth.

Well, now the Congressional Budget Office has released a report affirming what policy analysts and reproductive rights advocates feared: This bill will lead to a rise in unintended births.

The budget office report was an all-encompassing look at the effects that the AHCA would have on health care — none of them good — but it singled out the provision to undermine Planned Parenthood as particularly disastrous. The provision would bar women on Medicaid from using their coverage to go to Planned Parenthood. This would immediately result in many of those women losing access to contraception and lead to shuttering of clinics, which would, in turn result in more women becoming pregnant and giving birth against their will, as their local access to reproductive health care dries up.

The Congressional Budget Office estimated that 15 percent of women living in low-income and otherwise underserved areas would lose their access to services to prevent pregnancy.

Members of the anti-choice movement, according to The Washington Post, "zeroed in on the expectation that more babies would be born, which struck them as reason to celebrate." This is another indication that the anti-choice movement is not about saving fetal life, as activists often claim, but is far more about forcing unwilling women to give birth. After all, the only known way to reduce the abortion rate is to make it easier for women to avoid unwanted pregnancies, which requires access to contraception.

This isn't just conjecture. The abortion rate is at a historic low, and most analysts say the principal reason is that the ACA made contraception cheaper and easier to obtain.

No doubt anti-choicers think that by shutting down Planned Parenthood clinics, which perform about one-third of abortions overall, they can wiggle out of this problem by simply forcing women who become pregnant to give birth through lack of access to abortion.

Even setting aside the extreme misogyny of this position, this attitude is mistaken. Black market abortions are becoming easier toobtain than they were even in the days of the "back-alley abortionist." Obtaining without a prescription some misoprostol pills, which are used for a variety of ailments and known to terminate pregnancy pretty reliably, is fairly easy to do. Knowledge of this method is rapidly spreading through the United States by word of mouth and social media.

Some women who lose contraception access will give birth, but many will find a way to abort. There is no way to forcibly increase the birth rate without also increasing the demand for abortion. The fact that anti-choicers will accept a higher abortion rate in exchange for a higher rate of unwanted childbearing demonstrates that the movement is really about forced childbirth, not about being "pro-life."

This becomes even more evident when we consider, as my previous reporting and the budget office report make clear, that the AHCA would undermine Medicaid access and insurance for low-income women, which means that even those women who do have babies will not be receiving adequate medical care. As we saw in Texas, which has been hacking away at reproductive health care access, the result of such policies is rising maternal mortality.

"There are 12.9 million women of reproductive age insured by Medicaid who are in danger of losing their coverage if the ACA is repealed," said Dr. Diane Horvath-Cosper, reproductive health advocacy fellow at Physicians for Reproductive Health, in a press statement. "Even one person losing coverage is too many — but this drastic number indicates that under the proposed ACA repeal bill, access to affordable health insurance will be eliminated for millions of families."

There's nothing "pro-life" about the anti-choice movement, and its enthusiastic support for the Republican repeal of the lifesaving Affordable Care Act proves it.