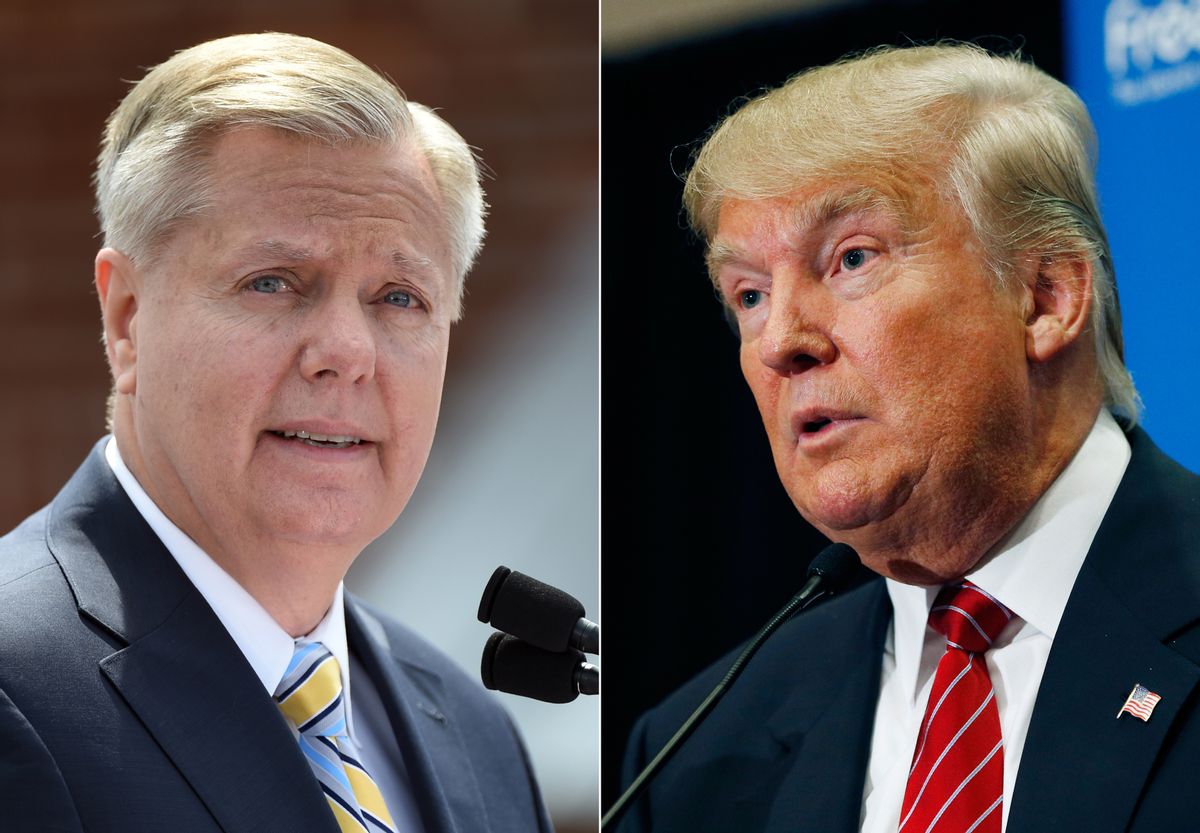 In this combination made from file photos, Republican presidential candidate, U.S. Sen. Lindsey Graham, R-S.C., left, speaks in Central, S.C., and fellow Republican candidate, real estate mogul Donald Trump, speaks in Las Vegas. In response to Trump's recent derogatory comments about Mexican immigrants, Graham says his rival is a "wrecking ball" for the future of the GOP with Hispanic voters, and is calling on the party to push back. (AP Photo/Rainier Ehrhardt, John Locher, File) (AP)
--

“We wrote it using the president’s own words,” Office of Management and Budget Director Mick Mulvaney told MSNBC on Thursday morning as the budget was released. “We turned those policies into numbers.” A look at the budget, however, finds funding proposals more directly in line with White House chief strategist Stephen K. Bannon's vow — to achieve the "deconstruction of the administrative state."

Trump’s first budget proposal, which he named “America First: A Budget Blueprint to Make America Great Again,” would cut the funding of the Environmental Protection Agency 31 percent, the State Department 28 percent and the Department of Health and Human Services 17.9 percent. In total, Trump's budget strips funding from more than 18 federal agencies.

The administration also proposed completely axing federal support for the Legal Services Corp., the Corporation for Public Broadcasting, the National Endowment for the Humanities and the National Endowment for the Arts. The Department of Housing and Urban Development's $3 billion Community Development Block Grant program, which funds anti-poverty programs nationwide, would also be eliminated.

There are a couple of discrete areas where the White House has proposed raising spending, however, including for Trump's "fantastic" U.S.-Mexico border wall and on the military. Trump's budget would allocate roughly a 10 percent increase or $54 billion more to defense and law enforcement programs than Congress approved this year. Separate from his 2018 budget, Trump also requested an additional $30 billion for defense spending in 2017.

Trump's budget calls for a $54 billion boost to military spending, a roughly 10 percent increase from what Congress called for this year. Separate from his 2018 budget, Trump also requested an additional $30 billion for defense spending in 2017.

"There’s no question this is a hard-power budget,” Mulvaney said on MSNBC. “It is not a soft-power budget.”

But all these draconian cuts to domestic spending and the substantially increased spending for the Department of Defense doesn't seem to be enough to satisfy the insatiable appetite of limited government conservatives in Congress who will have to vote on Trump's budget.

Before the White House had even released its official budget on Thursday, Sen. Lindsey Graham, R-S.C., had called Trump's governing priority list "dead on arrival," based on a reported blueprint. "What's most disturbing about the cut to the State Department's budget is it shows a lack of understanding of what it takes to win the war," Graham told the BBC late last month. "If you take soft power off the table then you're never going to win the war," Graham said, calling Trump's plan to slash that budget "a disaster."

Senate Majority Leader Mitch McConnell had echoed Graham's sentiments earlier this month. "The diplomatic portion of the federal budget is very important and you get results a lot cheaper frequently than you do on the defense side," McConnell said. "So speaking for myself, I'm not in favor of reducing the [foreign aid] account to that extent." McConnell said a budget that slashes State Department funds by one-third is unlikely to pass in his chamber.

In February Republican Rep. Ed Royce of California, chairman of the House Foreign Affairs Committee, had said in a statement, "I am very concerned by reports of deep cuts that could damage efforts to combat terrorism, save lives, and create opportunities for American workers."

And in a Feb. 27 letter to the White House objecting to the proposed State Department cuts, more than 120 former military officers quoted Trump's Defense Secretary, James Mattis, from his days as a field commander: "If you don't fully fund the State Department then I need to buy more ammunition."

Republicans in Congress remain concerned about Trump's promise to force Mexico to pay for construction of a wall along the border between the two countries. Mexican President Enrique Peña Nieto has said his nation will not fund the border wall. The budget plan released by the White House on Thursday calls for about $1.5 billion in immediate funding to build the wall and another $2.6 billion to finance border security in 2018.

"If we’re paying for it, it’s a significant concern,” Arizona Republican Sen. Jeff Flake told the Washington Post on Wednesday.

“I support border security, but I think we need a little more definition of exactly what the plan is,” Texas Republican Sen. John Cornyn cautioned on Wednesday. Another Texas Republican, Rep. Will Hurd, whose district spans more of the border than any other, called Trump's proposed wall “the most expensive and least effective way to secure the border” in a January statement.

The White House budget is also facing opposition from Republicans on the Hill who fear the spending cuts aren't deep enough.

“My fear is that the Trump budget will not be austere enough to minimize America’s risk of suffering the kind of debilitating insolvency and bankruptcy that is destroying the lives of Venezuelans right now,” Representative Mo Brooks of Alabama told Reuters this week. Brooks and other members of the conservative House Freedom Caucus want to see even further budget cuts.

As proposed, the Trump budget almost certainly will not pass Congress. A full budget, including economic and tax projections, will come in May, with the goal being for Congress to adopt a plan before the new fiscal year begins at the end of September.