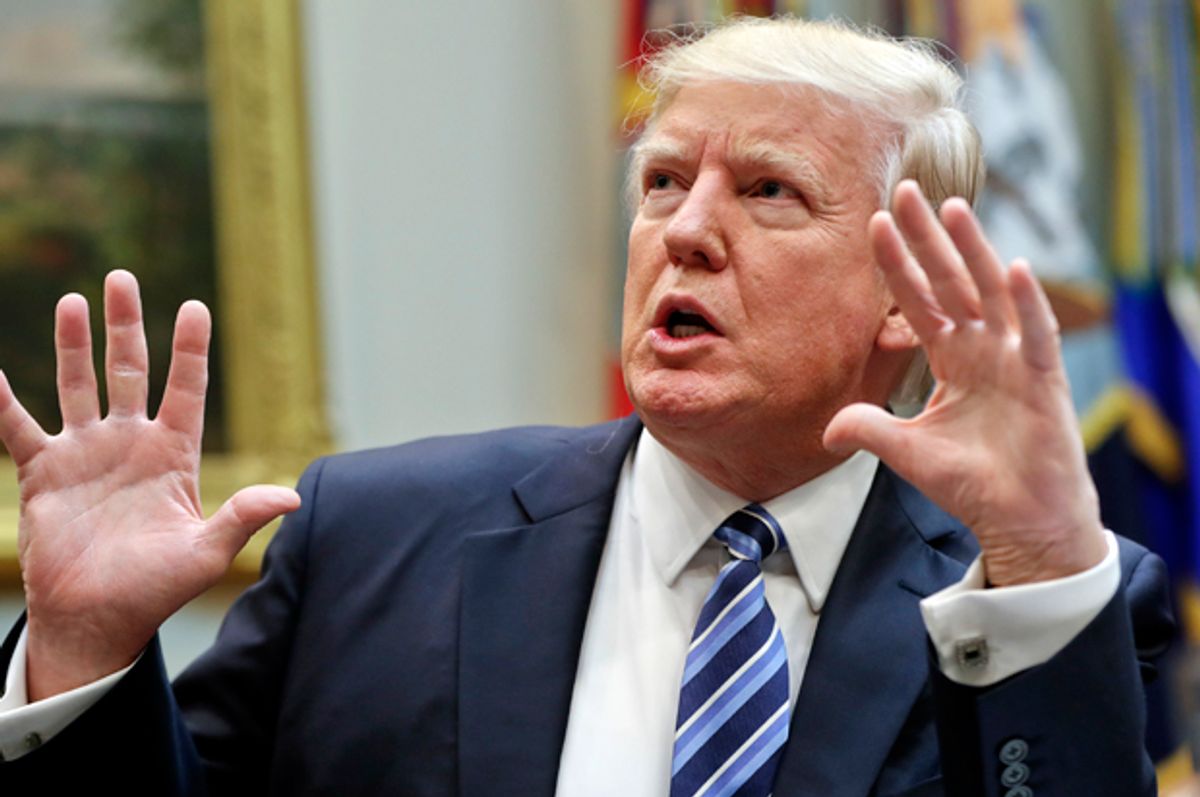 For a long time now, Donald Trump has broadcast to the world that he is different from other Republicans when it comes to the social safety net. While most Republican candidates in the 2016 presidential race hugged the party orthodoxy that called for cuts to and restructuring of social programs, Trump positioned himself as a champion of entitlements.

“I was the first & only potential GOP candidate to state there will be no cuts to Social Security, Medicare & Medicaid,” Trump tweeted a couple of months before entering the 2016 race. “The Republicans who want to cut [Social Security] & Medicaid are wrong,” he tweeted in 2015. After joining the race, Trump was similarly outspoken in his defense of government protections for the poor and the sick.

Throughout the 2016 campaign, Trump defended the idea of using government resources to provide low-income people with health care, insisting that he didn’t want to see anyone “dying in the middle of the street.” When asked how he would go about providing that assistance, Trump pointed to Medicaid. “We have to go and help them through the Medicaid system,” Trump said in September, when asked how he would provide coverage to people who can’t afford private insurance. “A lot of people said, ‘Oh, gee, that's not the thing to say.’ I said, ‘Well you know what? If I can't say that, I’m not running for office.’”

The casual observer might walk away from all these statements believing that Trump supports Medicaid and has no intention to do any damage to the program. But at the same time that Trump was campaigning as a Medicaid supporter, he was also pushing to fund the program through block grants, which would slash its finances and force people off the rolls. As president, Trump has continued this war on Medicaid.

Much of the violence that Trump plans to inflict on Medicaid will come through the American Health Care Act, the troubled health care reform bill that Republicans have offered as their “replacement” for the Affordable Care Act. The bill, which Trump and his administration strongly support, calls for a halt to the ACA’s expansion of Medicaid in 2020, and it would place per capita restrictions on the amount of federal funding that states can receive for their Medicaid programs.

All told, per the Congressional Budget Office, the AHCA amounts to a Medicaid funding reduction of $880 billion over the next decade. That’s a massive cut, and it would undoubtedly result in millions of low-income Americans either having their benefits slashed or being kicked off of Medicaid altogether. The budget office found that 24 million people would lose their health coverage under the AHCA by 2026, and those losses “would stem in large part from changes in Medicaid enrollment.”

Trump and his administration want to accelerate this process and worsen it. As noted above, the AHCA currently calls for an end to Obamacare’s Medicaid expansion in 2020. But the White House, in its eagerness to win conservative support for the legislation, is apparently planning to pressure Republicans in Congress to move up that date to the beginning of 2018.

This week brought still more bad news on the Medicaid front. As The Wall Street Journal reported on Wednesday, the Trump administration has communicated to governors that it “will work with states that want to alter their Medicaid programs by imposing work requirements, premiums, emergency-room copayments and other changes.” Imposing work requirements on Medicaid eligibility is an excellent way to cut people off from health coverage without doing much of anything to boost employment.

The notion that Medicaid recipients are just sponging off the government is wildly specious. According to the Kaiser Family Foundation, 63 percent of Medicaid recipients are in families with at least one full-time worker, and an additional 14 percent are in families involved with part-time work. The Center on Budget and Policy Priorities noted that Medicaid, rather than discouraging work, can actually help low-income people find jobs: “Research indicates that comprehensive Medicaid coverage can support work and help beneficiaries take advantage of promising job opportunities without worrying about losing their coverage.”

Imposing a work requirement as a barrier to eligibility, as the Trump administration wants to facilitate, makes it far more likely that unemployed people will lose access to health coverage. If those people become sick and can’t seek treatment, they’ll be less likely to find work. Providing “vulnerable populations with needed care can improve their health, help stabilize their housing or other circumstances, and ultimately improve their ability to work,” the center added.

President Trump, however, is hell-bent on hollowing out the social insurance program’s funding and making it harder for low-income people to have access to health coverage. That’s a terrible policy and a broken promise, one that runs directly contrary to how Trump sold himself to the American public.