From right-wing talk radio to Breitbart, to President Trump's Twitter, we track the implosion of his latest claims 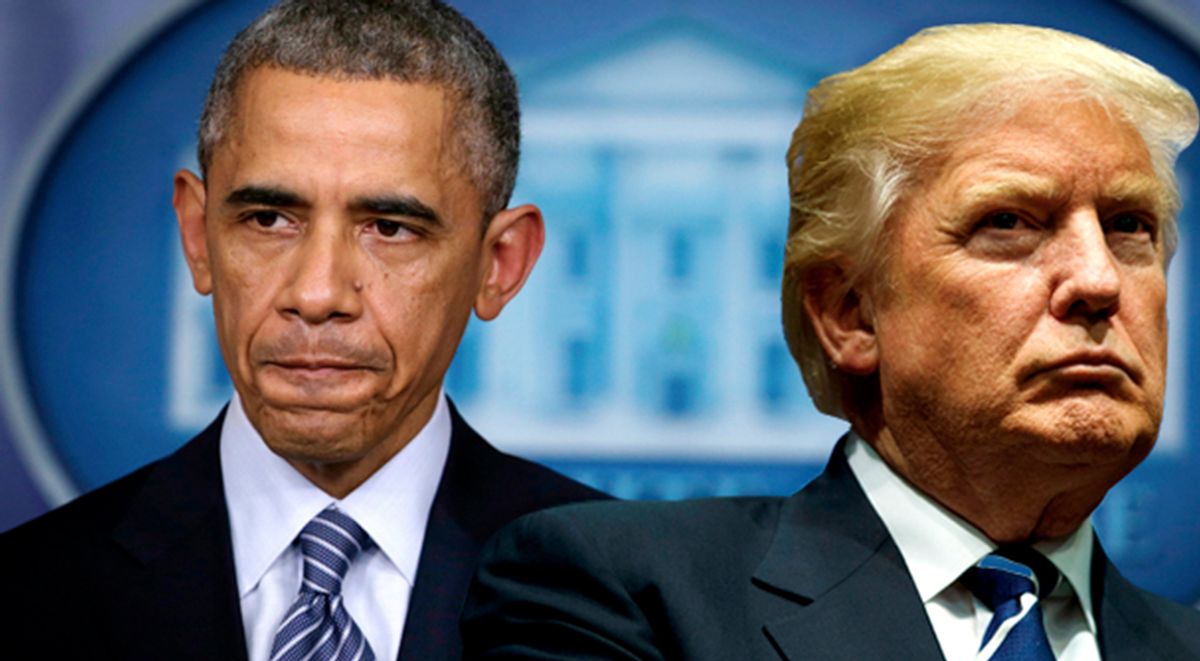 It's been almost two weeks since the leader of the free world made apparently baseless allegations against his predecessor in an apparent burst of anger. Slowly but surely, however, President Donald  Trump is beginning to back away from his scandalous claim that former President Barack Obama illegally wiretapped him during the 2016 campaign. But before Trump completely ducks yet another self-inflicted controversy, let's take a look at whole this entire saga unfolded:

It all began with Jeff Sessions.

The day Trump's embattled Attorney General announced his decision to recuse himself from any investigation of Russian meddling during the campaign -- following revelations that he spoke twice with Russia’s ambassador to the U.S. while serving as a top surrogate on Trump's campaign -- a right-wing radio host accused the Obama administration of using what he called “police state tactics” against the former Alabama senator.

“The incredible scandal here is the Obama administration was investigating top officials in the Trump campaign, maybe even Trump himself -- during the course of the election!” Conservative radio host Mark Levin said.

Within hours of Levin's comments, fringe right-wing website Breitbart typed up his rant without any additional reporting.

According to the Associated Press, a White House aide placed the Breitbart article in Trump's daily reading pile shortly before the president sent out his wiretap tweets the next morning. The website is a favorite of the president's and was formerly run by Trump adviser Stephen Bannon.

In an interview on MSNBC's "Meet the Press Daily"  this week, the author of the Breitbart article, Joel Pollack, made clear that Levin's rant was the source of his story.

"The story about how this article was written is very simple," Pollak explained to Todd: "It was late at night and I was washing dishes, listening to Mark Levin's show from earlier in the day, and I thought, 'Wow, that's amazing.' I had seen all these articles, but nobody had actually put the case together the way Levin had. And so I reported the way he put it together and I added some of the historical events that happened in between, to basically show that the government under the Obama administration had done some surveillance of individuals close to Trump or a computer server in Trump Tower."

Pollack went on to cite well-reported stories from The New York Times and The Washington Post that have indicated US intelligence officials were investigating possible ties between Russian operatives and people in Trump's inner circle to support his article. He failed to mention, however, that neither of those stories made the specific wiretapping claims Trump did.

"Did you over-write that?" Todd asked. "Should your article have been interpreted by the president as fact-based, or you were basically laying out a potential scenario?"

Pollack said that he simply presented "a set of facts lined up to make an argument about what happened, which is how many legal arguments are crafted."

Early on a Saturday morning, the president sent off a series of four fiery tweets accusing Obama of "McCarthyism" from his Florida Mar-a-Lago property.

“How low has President Obama gone to tapp my phones during the very sacred election process. This is Nixon/Watergate. Bad (or sick) guy!” another tweet read.

Trump followed up his tweets accusing a former president of a criminal felony with tweets mocking his "Celebrity Apprentice" successor Arnold Schwarzenegger.

The White House has gone through several responses to Trump's wild accusations. The day after Trump's early morning Twitter tantrum, the White House called for Congress to investigate.

“[Trump] is going off of information that he’s seen that has led him to believe that this is a very real potential,” Deputy Press Secretary Sarah Huckabee Sanders said on ABC. “And if it is, this is the greatest overreach and the greatest abuse of power that I think we have ever seen and a huge attack on democracy itself."

After abruptly canceling the White House's daily on-camera press briefing the day before, White House Spokesperson Sean Spicer told the press that the White House would not comment any further until congressional investigations took place.

"No comment," said Attorney General Jeff Sessions when asked by reporters about the president's claims.

The next day, Spicer returned to the White House press briefing room to make clear that Trump's tweet claimed that Obama wiretapped him during the campaign without the backing of Department of Justice investigation, an illegal act:

“I think if you look at the president’s tweet, he said very clearly ‘wire-tapping’ in quotes,” Spicer this week.

FBI director James Comey reportedly urged the Justice Department to dispute Trump’s claim but has not come forward to do so himself.

Sen. Lindsey Graham, R-S.C., who heads the Judiciary Committee's crime and terrorism subcommittee, said the FBI will provide a classified briefing on the matter "at some time in the future." Comey is set to testify in front of the House intelligence committee on Monday, March 20.

Senior White House adviser Kellyanne Conway proved that her magic touch from the campaign may be wearing thin when she presented a bizarre theory to make sense of her bosses' claims.

“There are many ways to surveil each other now unfortunately,” Conway said in an interview with the Bergen County Record. “There was an article this week that said you can surveil someone through their phones, certainly through their television sets -- any number of different ways … microwaves that turn into cameras, etc.”

In another interview, Conway clarified: “I’m not Inspector Gadget … I don’t believe people are using the microwave to spy on the Trump campaign. However, I’m not in the job of having evidence.”

Spicer returned to the White House briefing room to face another round of questioning on Trump's still unsubstantiated claims.

Trump is "extremely confident" that the Justice Department will find evidence to back up his claim, the press secretary told reporters.

But just the day before, the Justice Department was forced to ask the House Intelligence Committee for more time to respond to the panel's request for information related to Trump's accusation.

Spicer told the press corps that the president believes he will eventually  be "vindicated."

Rep. Devin Nunes, the House Intelligence Committee chair, quickly put a damper on the White House's premature victory parade when he announced on Wednesday that there was no evidence. "I don't believe there was an actual wiretap at Trump Tower," he told reporters.

Nunes suggested that Trump's tweets should not be taken at face value.

"Are you going to take the tweets literally?" Nunes said. "If so, clearly the president was wrong."

James Clapper, who was Obama’s director of national intelligence, has also said that nothing matching Trump’s claims had taken place under his watch.

Perhaps feeling increasingly isolated in his fringe belief, Trump attempted to broaden the definition of wiretapping in an interview with Tucker Carlson on Fox News Wednesday night.

The phrase wiretap "covers surveillance and many other things," he explained. The president said he'd learned about the alleged wiretapping from news reports referencing intercepted communications, despite the fact that he and his advisers have publicly denounced stories about government agencies reviewing contacts between Trump associates and Russians.

"I've been reading things," Trump said, while pointing to a New York Times article and remarks that Fox News host Bret Baier made.

His press secretary, Sean Spicer, made a similar reference back on March 13. "There’s been reports in The New York Times, in the BBC and other outlets about other aspects of surveillance that have occurred,” he said, pointing to news outlets the president has blasted as "fake news."

Trump told Fox News viewers, "you're going to find some very interesting items coming to the forefront over the next two weeks."

March 16: "We have not seen any evidence"

But the very next day, Trump received two major blows against his claims from Congress.

The Senate Intelligence Committee Chairman, Richard Burr, a Republican, and the ranking Democrat, Mark Warner of Virginia, released a joint statement saying they have not seen any evidence to indicate there was any wiretapping of Trump Tower:

Based on the information available to us, we see no indications that Trump Tower was the subject of surveillance by any element of the United States government either before or after Election Day 2016.

"We have not seen any evidence that there was a wiretap or a (Foreign Intelligence Surveillance Act) court order against Trump Tower or somebody in Trump Tower," GOP House Speaker Paul Ryan reiterated in an interview Thursday on CNN's "The Situation Room."

Despite every authority who has investigated the matter saying to the contrary, Sean Spicer kept up his defense of Trump nearly two weeks after the initial tweetstorm.

“He stands by it,” Spicer said of Trump’s accusation at a press briefing that was delayed by more than an hour after the Senate Intelligence Committee's statement was released Thursday. Spicer argued that reporters were “mischaracterizing” the senators’ statement.

“The bottom line is the president said last night that he will be providing, there would be additional information coming forward,” he said.