During a precious moment in Egypt when freedom unfolded before the world, Bassem Youssef told jokes to power 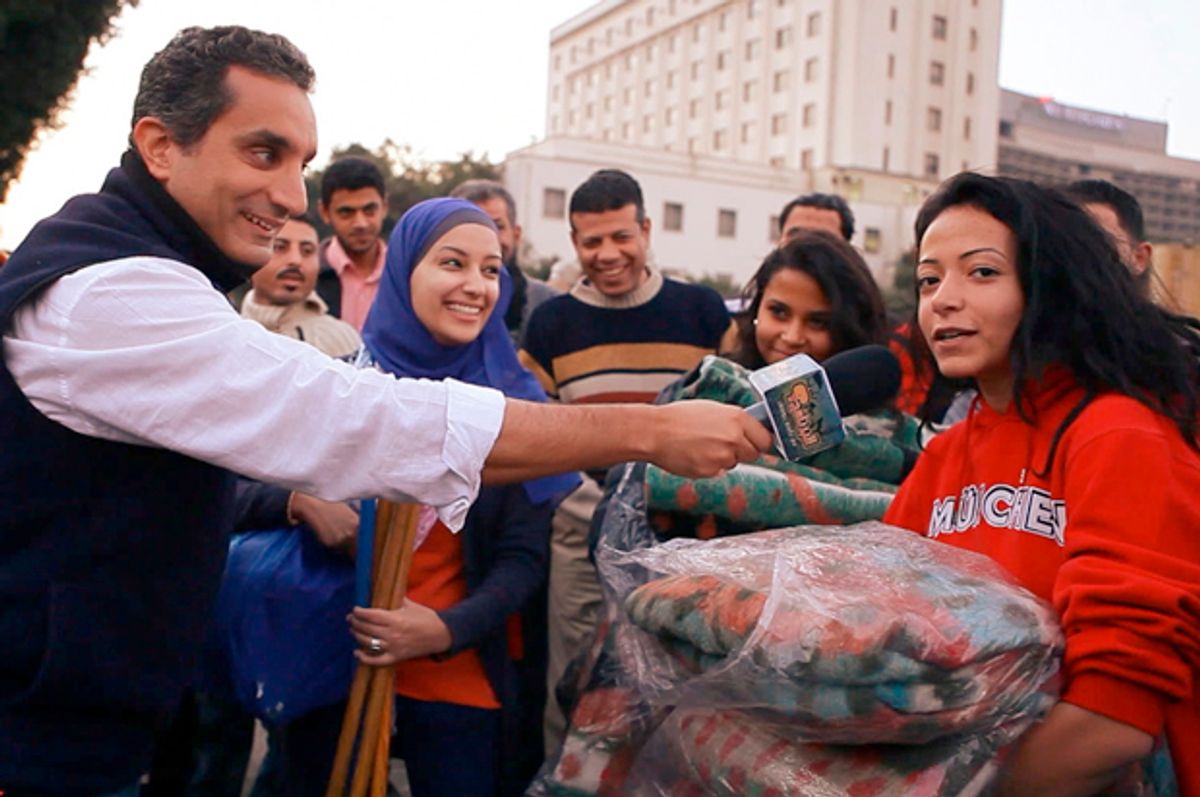 For anyone who misses the snarky wit of Jon Stewart, the outstanding and timely documentary “Tickling Giants” showcases the life and razor-sharp political comedy of his Egyptian equivalent, Bassem Youssef.

Sara Taksler’s film opens with a disclaimer, “Speaking out against oppressive regimes may cause side effects” and lists headaches, mood swings, indigestion and the loss of constitutional rights, among other things. Moreover, the announcer insists that “Tickling Giants” is not approved for all audiences; dictators are encouraged to “please leave the room now.”

Taksler chronicles how Youssef, a heart surgeon, in 2011 leaves his practice “cutting people open to see their insides” to become a cutup on TV, cracking wise and satirizing Egypt's politics and its president on his program “Al-Bernameg” (“The Show”). Co-created with his friend Tarek ElKazzaz, the first episode is shot in Youssef’s laundry room with a desk, a camera and a wall of photos. Uploaded to the internet, it goes viral, receiving 35,000 hits in one day. In 2012, Capital Broadcast Center, an Egyptian TV station, has Youssef on the air. Scenes of Egyptians sitting in outdoor cafes watching him and laughing are infectious. Viewers will appreciate just how funny Youssef is as he speaks truth to power.

But Egyptian authorities are not keen on satirical political humor. Under President Hosni Mubarak, the (unwritten) rule was “You can say whatever you want, unless it pisses off Mubarak.” Journalists were often sent to jail and, in defiance of 30 years of such treatment under Mubarak, thousands of Egyptians hit Tahrir Square during the Arab Spring. Youssef was one of those people. He was working in his capacity as a doctor to help the wounded. He explains in the film that what he saw was two realities: one that was happening in the streets and the other that was shown on TV. The media version was “brainwashing” people and “inciting hate.” When Mubarak resigned and freedom is possible, so, too, is “The Show.” And there is nothing else like it in the Arab world.

“Tickling Giants” describes just how parodying the media succeeds under different regimes. Youssef is a good-looking, rubber-faced comedian with piercing blue eyes and crackerjack timing. Watching him perform, in English or in Arabic, is a delight because of his priceless expressions and body language. He obviously enjoys what he does and believes strongly in it. That conviction comes across but it never seems arrogant.

A particularly amusing scene has Youssef in America to appear on “The Daily Show.” Seeing the Egyptian comic running around Stewart’s set, sitting in his chair and even stealing a coffee mug is inspiring because of the freedom Youssef has to do this. And the interactions between the two comedy hosts on air and off illustrate how important this kind of political satire is around the world. That Stewart later makes a guest appearance on Youssef’s show — in a very clever “spy” skit — only generates more goodwill for both performers.

“Tickling Giants” is not all fun and games, however. While “The Show” undergoes an upgrade in season 2, adding a live studio audience and hiring writers, such as Andeel, a fan whose political cartoons inspire the film’s animated segments, there is trouble with the new democratically elected Egyptian government. When Mohamed Morsi, a member of the Muslim Brotherhood, becomes president of Egypt, Youssef’s sarcasm gets him into trouble. One particular (and particularly funny) skit mocks Morsi, and “insults” Islam. Youssef is charged with “contempt of Islam” and turns himself over to the district attorney. The case is dismissed, but it illustrates how those in power don’t like “The Show” satirizing President Morsi calling for optimism while Egypt faces an economic crisis.

Stewart observes, “Any regime not strong enough to handle a joke is not a regime.” Talking about "insult versus injury," Stewart continues that it is one thing to question authority with humor; it is something else entirely to commit violent protest in the name of freedom and free speech.

This point is made repeatedly throughout “Tickling Giants” as Youssef becomes a target for the authorities who are concerned about his influence over 30 million viewers. How far can Youssef go without being thrown in jail? It is a legitimate concern.

When Morsi is deposed, the country again heads into turmoil, and Youssef tries to keep the show going even though it is hard to make fun of a tense political situation that he says, “feels like it is 9/11 every day.” This is not drama for dramatic effect.

When Defense Minister Abdel-Fattah el-Sissi shows political might and captures the public attention and imagination, it becomes a test to see how his regime will handle criticism by Youssef and “The Show.” As the third, and least funny act of “Tickling Giants” plays out, the answer is not very well. In what may be the most absurd of all paradoxes, CBC, the very channel that broadcasts Youssef’s show, attacks him. Given a false choice, Youssef is told he can stay on the air as long as he stops making fun of the authorities.

Youssef bravely faces tremendous pressure and Taksler interviews him about the dangers of speaking out under a dictatorial rule. He eloquently explains that his sudden and widespread fame has had negative side effects: He can’t sleep, he is not eating and he lives in fear. Youssef is particularly concerned about the safety of his wife and family. His brother and father have started attending his programs as a security precaution given that protesters have started gathering outside the studio.

Despite all of these drawbacks, “Tickling Giants” shows just how Bassem Youssef is inspiring people. Miral, a researcher on “The Show,” explains her decision to not wear a headscarf is a symbol of her personal freedom.

Alas, there are too few stories like Miral’s in the film. The difficulties Youssef faces under Sisi’s regime and without his station’s support lead to the show's being canceled, then picked up by another network — only to have the signal jammed during broadcast. Adding injury to insult, Youssef is slapped with a huge lawsuit by CBC. Throughout it all, the host insists he will not be a mouthpiece for the government — that it is important to hold authorities responsible no matter who is in charge.

“Tickling Giants” is valuable for introducing viewers to Youssef, and his is a voice that deserves, if not demands, to be heard. Watching him handling his staff in a preshow meeting or talking to disappointed fans in the audience at a postshow Q&A, Youssef speaks from the heart. He is no less genuine and impressive talking to journalists groups and other associations than when he is giving a keynote address. Most important, he is truly clever and funny.

Taksler’s film may feel like a hagiography, but it’s not. It’s a provocative and rousing portrait of a man who sees how to use satire as a weapon and wields it as precisely as a scalpel. He often draws blood but always looks to save the heart at risk. Besides, for anyone who cannot appreciate Bassem Youssef, there is, as the host jokes, always hummus.