Field of one: What Donald Trump’s decision not to fill out a bracket says about his media strategy 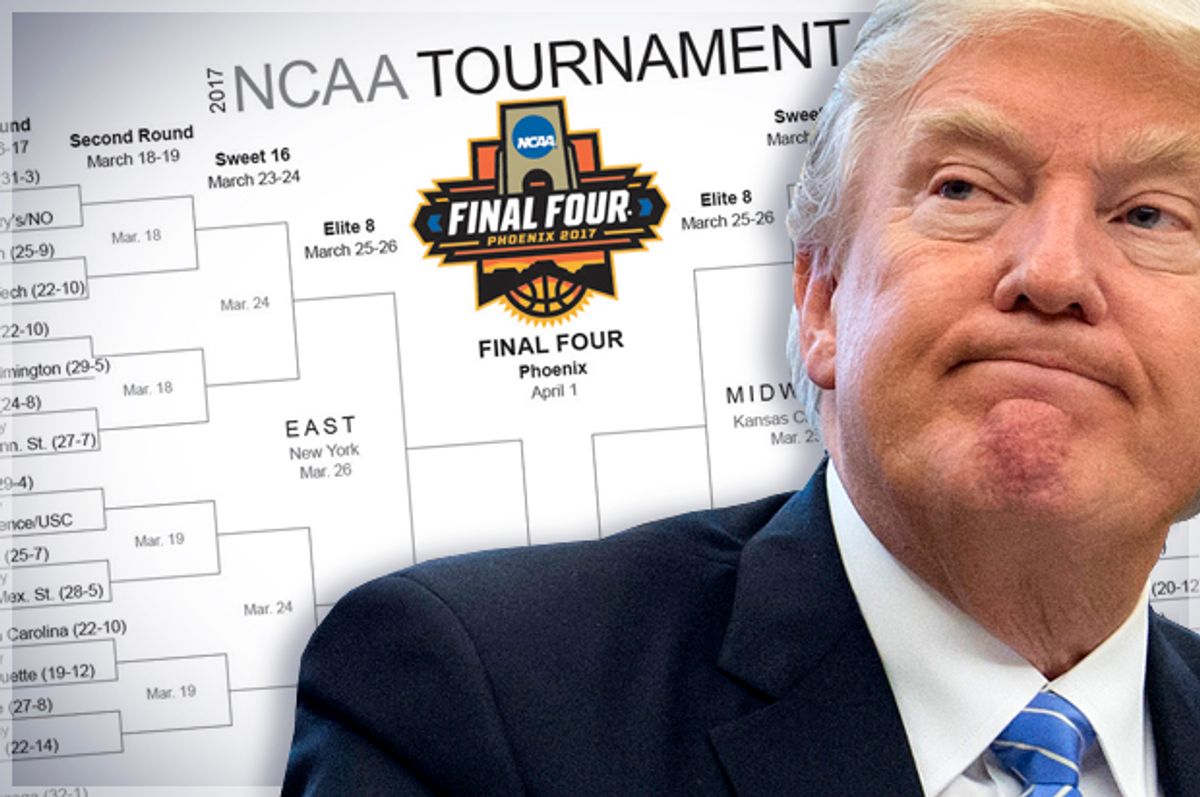 Amidst all that President Trump did this week, largely overlooked was one small thing he didn’t do: fill out an NCAA tournament bracket on ESPN.

The presidential pick ’em became a tradition during the Obama administration. Each year of his presidency, Obama announced his picks for the men’s and women’s NCAA tournaments in a television special with ESPN college basketball reporter Andy Katz.

Having President Obama give his picks on ESPN was Katz’s idea, dating back to when Obama was a senator running for president. Obama was, and is, known as a big basketball fan. Though he couldn’t watch as many games as he would’ve liked to as president, he was a regular SportsCenter viewer and someone who could chop it up.

“He wasn’t as dialed in to every player or team but had conversational knowledge to offer his own analysis on the NCAA tournament for the men’s and women’s game,” Katz told the Washington Post. “'Baracketology' was a success because it was clear he was a fan of the sport and the NCAA tournament, like millions of other Americans.”

This year, ESPN attempted to keep the tradition going by extending an invite to President Trump. But President Trump declined; his team told the Washington Post, “We look forward to working with ESPN on another opportunity in the near future.”

Trump’s team did not give a reason for declining to participate. But there are a few obvious reasons why President Trump might have declined. First, he was busy — rolling out a proposal for an ambitious budget, fielding attacks on his health care bill from both sides of the aisle, and stoking conspiracy theories. Second, Trump is not known to be a basketball fan and might have felt unqualified to weigh in on the tournament — though lack of information has never stopped Trump from pontificating before. Third, the tradition was Obama’s and Trump might not have wanted to associate himself with his predecessor.

The appearance also likely would have been met with backlash from the left. President Obama’s forays into pop culture were typically scorned by conservatives, and picking a bracket was no exception. When Obama picked his bracket in 2014, Fox News ran the banner “Obama Picks NCAA Bracket While Putin Declares Crimea as Part of Russia.” And Rush Limbaugh similarly attacked Obama for filling out his March Madness bracket picks while Putin "is reassembling the Soviet Union." Oh, how times have changed.

While President Obama clearly enjoyed opportunities to have non-political conversations, there was also purpose behind engaging with entertainment media. When Obama picked a bracket, appeared on a sports podcast or a comedy web series, he was attempting to relate to his constituents on a personal level. These were efforts to suggest that whether or not you liked his policies, he was the type of guy with whom you could grab a beer.

Jeff Fellenzer, who has taught a course on "Sports, Business and Media" at the University of Southern California since 1999, said that filling out a bracket projected an authentic, intense fandom that couldn’t be communicated by throwing out a ceremonial first pitch or attending the Super Bowl. “I thought the idea of filling out the bracket was a lot of fun,” he told me in a phone conversation. “There's something about it that makes you wonder if he's really studying, if he's really aware of what a great three-point-shooting team UCLA is, or what kind of a field goal percentage defense Virginia has. It makes you think he's more of a hardcore sports guy than you thought.”

President Obama also used pop culture appearances to address systemic debates within sports and to promote policy. He helped push college football to adapt a playoff system by weighing in on the subject in a 2009 interview with ESPN’s Chris Berman. And while filling out a bracket in 2015, he urged the N.C.A.A. to address college athletes’ education. “For a lot of the average kids who are not going to be able to get a pro career, are those schools making sure that they’re actually getting a good education, that they’re actually getting a degree, that, if they get injured, their scholarships stick with them?” he said.

Most of these appearances also included a pitch for Americans to sign up for Obamacare. In polarized times, mainstream entertainment was a conduit to the masses. That Trump’s administration just last week came out with their own health care proposal made Trump’s decision not to appear on Bracketology all the more glaring. His predecessor surely would have used the op to promote the plan.

Instead, Trump appeared on FOX News Correspondent Tucker Carlson’s show, “Tucker Carlson Tonight,” this week. They spent a good portion of the program discussing Trump’s unsubstantiated claim that President Obama wiretapped him. And he offered a soft defense of his health care proposal, saying “it’s very preliminary” and “a lot of things aren't consistent, but these are going to be negotiated. We've got to go to the Senate; we'll see what happens in the Senate.”

Since being elected president, Trump has appeared on “60 Minutes” and he was interviewed by Bill O’Reilly for FOX’s Super Bowl pre-game show. His presidency is still in its infancy, but he has thus far indicated that he will take a different tack than his predecessor when it comes to participating in pop culture. The entertainment industry has largely rejected him, and he has reciprocated — he responded to Meryl Streep’s critical Golden Globes speech by calling her “overrated;" he has picked fights on Twitter with new “Apprentice” host Arnold Schwarzenegger and Snoop Dogg; and this week he proposed a budget that would cut endowments for the arts and humanities.

Where Obama used culture to try to win support for legislation and unify, Trump has dismissed culture and instead focused his attention on social media and on far-right media. Brian Rose, who is a communications professor at Fordham University, said that Trump’s hostility toward entertainment culture stems from his disinterest in building bipartisan consensus, which diverges from his predecessors of both parties.

“Trump's core supporters basically view him as God, so it doesn't really matter how he conveys his message, what his relationship is with pop culture or anything,” Rose said. “You really have the first anointed-by-God president. I really think there is nothing in the world that could happen that would make his supporters turn away. And that goes to the shift in culture away from common pop culture. They live in their media bubble and we live in ours, and there is absolutely no meeting of the ground between them. Anything that comes out from mainstream media is going to be immediately denied.”

In other words, Trump’s uniting the country through an ESPN special is less likely than him filling out a perfect bracket.