Eat (like) the rich: Our celebrity cookbook obsessions, ourselves

What the celeb diets we consume say about us, from GOOP and Lena Dunham's plants to Ted Nugent's kill grill 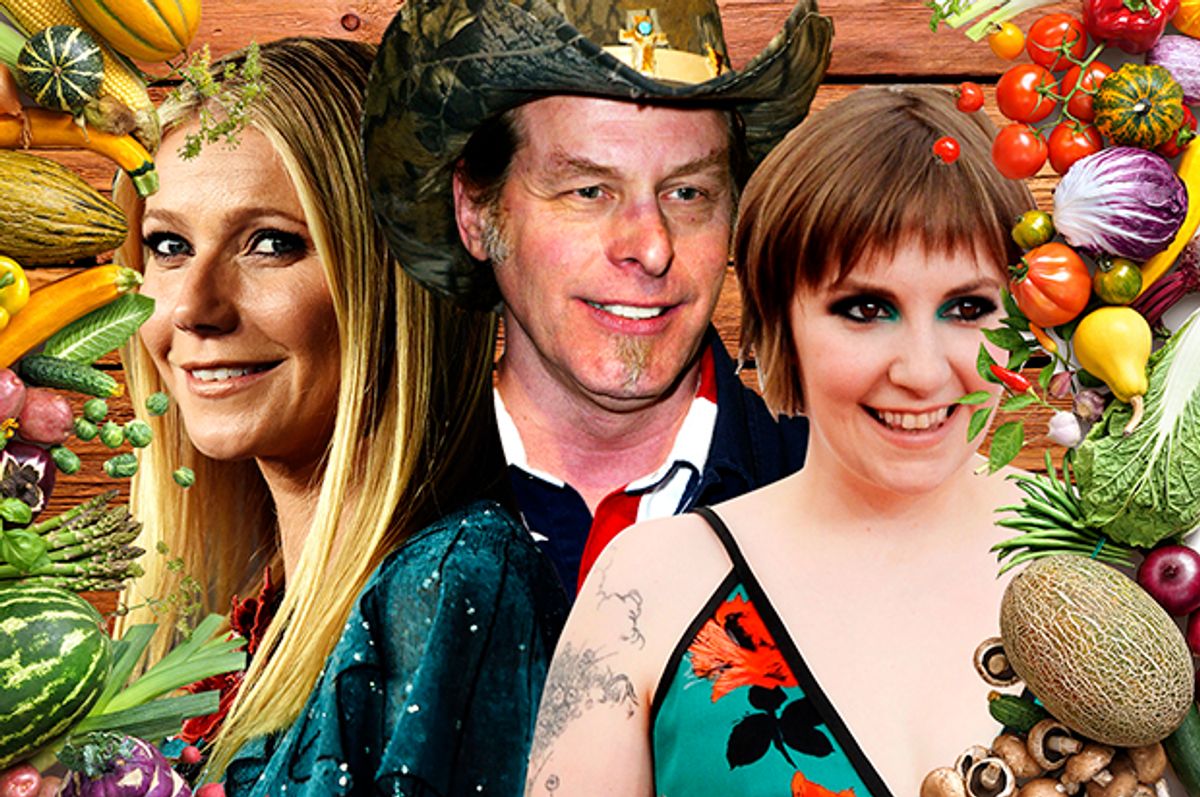 “That looks like a nice healthy lunch,” a female colleague said.

We were having a working meal, and I’d sat down with a plate assembled from the salad bar: one-fourth an avocado, two tablespoons of chickpeas, five grape tomatoes, a tong's worth of carrot shreds, a shake of sunflower kernels, a dousing of red wine vinegar, a drizzle of olive oil from the cruet, and shredded salmon on a bed of mesclun.

I smiled with all the persuasion of a marionette.

My colleague was eating chicken soup and orange Goldfish crackers. She had a plastic cup of strawberry Jell-O. How could I tell her that the salad I was eating wasn’t good enough, that salmon was by no stretch of anyone’s imagination plant-based, that for a total of zero diagnosed health reasons, I’d been adhering to a gluten-free diet for the last eight months, and that now I was trying to eliminate added sugar and cheese from my diet, and not fish yet, but I was thinking about it, feeling like I could do better, where do better means eat “cleaner” or “plant-based,” despite my therapist’s admonitions that all this “something between monitoring and restricting” put me on the slippery slope with my eating disorder, which seemed, lately, to be trending orthorexically — largely due to pressure from peers who didn’t know I existed?

“Small changes are still changes, and you will feel them in ways that surprise and excite you,” Lena Dunham writes in her Letter to the Reader, the first text after the cover page and table of contents in the new cookbook "One Part Plant." "One Part Plant" (or OPP) is the ISBN-ed extension of graphic designer-turned-food blogger Jessica Murnane’s brand, a cheery, plant-based eating program that, according to Murnane, is definitely “not clean-eating exactly, it’s more like do whatever you want.”

Do whatever you want looks like mushroom lasagna with layers of cashew cream and gluten-free pasta and basil-icious red sauce (wonderful). Do whatever you want is raw cashews blended with cocoa and almond milk and maple syrup into a chocolate cashew butter that will make that jar of Nutella languishing in your cabinet feel like the wallflower of 21st century food. There are butternut squash and lentil tacos, strawberry and chia seed jam, a fierce-looking nut butter tart, the best gluten-free, dairy-free chocolate chip cookies I’ve ever tasted.

Or — well, I think they would’ve been. Clean eating takes such hold over me that I couldn’t even follow Murnane’s cookie recipe; chocolate chips, I thought, a little judgy. I weighed the cost of buying vegan chocolate chips, how I might sort through brands, scouring grams of sugar. Instead, I substituted cacao nibs.

“They’re supposed to have chocolate chips,” I said.

We salvaged them by sandwiching them with chocolate cashew butter.

Lena Dunham and Jessica Murnane share an endometriosis diagnosis, which, Murnane told me, was the impetus for her lifestyle overhaul. It’s the reason Dunham’s been working out with Tracy Anderson, too, providing much fodder for Twitter-pation. Recently on Refinery29, Carolyn Todd wrote in response that it’s time to “Stop Talking About Lena Dunham’s Weight.” “We know that weight is not an indicator of health,” stresses Todd, “and that Dunham's intent was to build strength and feel good. Why the superficial emphasis on her weight? Celebrating her purported weight loss is saying thinner is better, a message Dunham is clearly not down with.”

More questions: Why is it still news when we think a woman has gained or lost weight, is trying to gain or lose weight? Why are we societally so hungry for good reasons to eat consciously or exercise?

For Murnane, those good reasons stem from the physical pain caused by endometriosis. In a recent interview, Murnane told me that changing her diet helped her listen to her body more.

"If you’re feeling like shit all the time, it’s really hard to listen to your body because it just feels like garbage," she said. "If you actually feel good and then you, let’s say, eat something that doesn’t sit right with you . . . that’s the way your body’s actually talking to you."

"It’s not this enlightened rays of sunshine and rainbows coming out of your head," Murnane added. "It’s literally, physically, how you feel."

The truth is, of course, that many readers will consider "One Part Plant" as part of the new way-to-feel-right toolkit that’s unavoidable with an internet connection or an Instagram account. Today, we do feel a need to rationalize our lifestyle choices, perhaps more so than ever. Do they look right or would we be embarrassed to Snap them? We live in a world obsessed with consumption trends — and at the same time, enthusiastic about backlashing against everything from veganism to Goop-fancy. There’s the scientist (Timothy Caulfield authored "Is Gwyneth Paltrow Wrong About Everything?: When Celebrity Culture and Science Clash") and the journalist (Joanna Rothkopf, managing editor of Jezebel, who slammed Paltrow's new vitamin packets in “Goop Wants to Cure the Mundanities of Being Alive”), and yet academics and journalists, snarks and acolytes alike, give Paltrow's brand ample airtime.

Today’s food bloggers and wellness gurus supplant fears of the veganist hardcore with a rhetorical shift to the term "plant-based." Health-conscious gourmets combing the new cookbooks might add "The First Mess: Vibrant Plant-based Recipes to Eat Well Through the Seasons" to their shelves, along with "Naturally Nourished" or "Blissful Basil." Yes, these authors often send shout-outs to Isa Chandra Moskowitz, who founded the Post Punk Kitchen (“to give vegans something to watch”), but by and large the new wave of “vegan” cooking looks a lot like "One Part Plant": a natural, minimal, gradual transition — “small changes,” as Lena Dunham wrote.

Murnane says that while she respects vegans, she doesn't follow a plant-based diet for ethical reasons.

That mushroom lasagna is what sold me on "One Part Plant," which has a more holistic and friendlier title than Mark Bittman’s "VB6," a book I bought a few years ago that touts a similar philosophy to Murnane’s, despite sounding like a juice or bulking supplement. The lasagna alone is worth the cost of "OPP": gooey, savory, a little overwhelming — like any good lasagna. You’d never think you were eating plant-based.

Or maybe you would. Maybe, like me, you’d get excited to soak a cup of cashews in filtered water. (“An aquarium,” my husband commented.) Maybe you’d feel not intimidated but, finally, part of something.

So true: I’m not the audience that Murnane worries about excluding. I’ve long been comfortable with vegans, ever since I encountered a clique of them at my high school. They were the smart kids, the artsy kids: I thought they were cool. No, it’s not eating plant-based (or vegan) that scares me: It’s eating like someone else.

What does it mean to subscribe to a celebrity's way of eating? Though "One Part Plant" insists it’s not a diet or weight-loss book, and though Dunham's foreword in the cookbook doesn’t sing the praises of an altered body, I can't help wondering about the ways that even a feel-good, “do whatever” approach to plant-based eating might lead women to the same chronic body/lifestyle dissatisfaction that more stringent plans yield. (As Jackie Kennedy — she of asparagus diets — once said, “It takes an awful lot of effort to make something look effortless.”)

Sure, there are different types of celebrity cookbooks — everything from the carnal (Ted Nugent's "Kill It & Grill It") to the humane (Alicia Silverstone's "The Kind Diet") to the historical (Vincent Price's "A Treasury of Great Recipes") to the hilarious ("Cookin' With Coolio: 5 Star Meals at a 1 Star Price"); there are recipe books by celebrities whose stars have risen, and those who have fallen (see "Back to the Kitchen" by Freddie Prinze Jr.).

But the intersection of celebrity cooking and plant-based eating is as confusing as a small town roundabout, where you never know who’s trying to merge and who’s already circled the common. There are questions that only consumers can answer, the main one being: Why am I subscribing to a plant-based diet? Is it to feel good or (secretly/not-so-secretly) look like [insert celebrity/blogger]?

Ruby Tandoh, the supremely talented British food writer, speaks to the tyranny of clean eating and wellness regimes in her 2016 Vice essay, “The Unhealthy Truth Behind ‘Wellness’ and ‘Clean Eating.’” Tandoh depicts her own orthorexia and bulimia, admitting, “I became fearful and thin. I had found wellness, and I was not well.” She also turns a critical eye to what our cultural attraction to clean eating (and wellness, generally) suggests, that “"[w]ellness' lifts us above this food chaos. Why not un-clutter our diets and go back to basics? This is the salvation that wellness promises: no new science, no cutting-edge technology, no fads, but a look backward to a simpler time.”

In talking to Murnane, I realized how lucky she was: She had an authentic connection, a simpler connection, with Lena Dunham, one that, I admitted to her, made the endorsement seem valuable — and even socially responsible. “With someone like Lena and Padma from 'Top Chef,'” Murnane said, “people weren’t even really talking about endometriosis before, and now you can Google the word and a 16-year-old girl that is in constant pain, now knows.

"I am grateful to Lena for not only writing that but for being open about her disease,” she added.

Still, I’m torn. I want to eat plant-based meals, and not feel like I’m on a diet or almost a diet. I want to fill my body with virtuous foods, and yet the more I think about what to feed myself, the more I realize I’m not thinking about other things in my life. I wonder if I need to practice, or keep going, or reevaluate the appeal of plant-based eating. (Murnane would probably approve: “As much as I think that plant-based eating is glamorized . . . for me it’s what makes me able to wake up every day and feel good and be able to function, so if that means I have to soak some lentils for an hour, that’s what I have to do.”)

Selfishly, I ask: What about me? What about the people who wake up and feel good, but still feel compelled to see if they can feel better? What about people who drink the no-sugar, no-dye Kool-Aid?

Maybe I’m overanalyzing. Maybe healthy eating, like self-care, is worth spending considerable brain time on; maybe it’s an investment in myself. Murnane likens it to having a part-time job.

"It’s that important to me. You get to the point where you feel so bad that you have to make a choice," she said. "I think it’s about making it work for you. I mean, not everything is easy. We do a lot of hard things in our lives and changing my diet was probably a pretty hard thing that I had to do.”

Still, there’s a fine line between consuming and being consumed. I’ve adored cooking "OPP," and in a world where Goop Wellness packets could buy a family of four groceries for several days, Jessica Murnane’s mission to make plant-based meals more accessible is laudable.

At the same time, “you are what you eat” has never been truer. The salad I ate for lunch with my colleague was healthy, I suppose. But believing that adjective is capable of defining me leads to nothing but a sour stomach and expectations I can never live up to, the sort of thing that casts a pall over my “cheat day,” today, just a few hours ago, when for dinner I had two slices of deep dish pizza.