Is it possible to recover from narcissism? 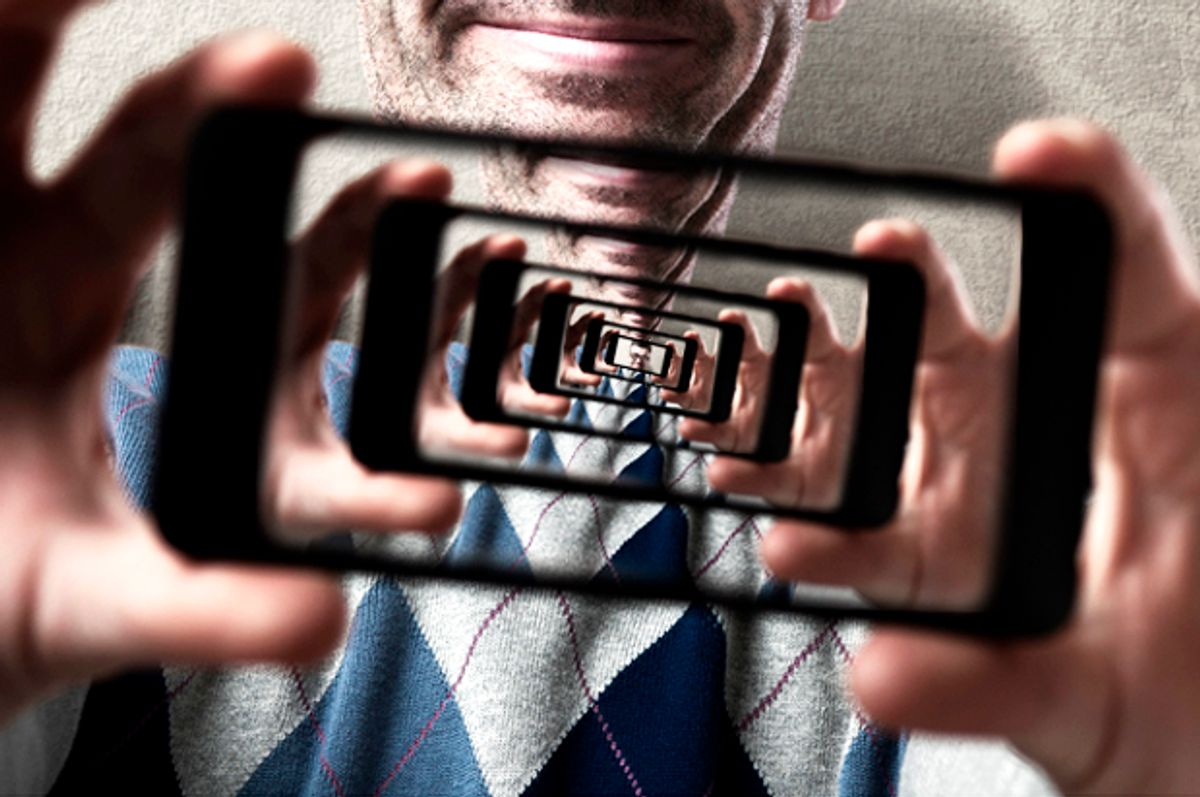 It’s probably not normal to ask a new friend to take the notorious Dark Triad Personality Test on a mobile phone in a dimly lit wine bar with bad Wi-Fi on your third time hanging out. However, this did not deter me and Nina.

We met negotiating a consulting job, and it was obvious that we were destined to be pals before we even finished our appetizers and split the grilled cheese. One of the reasons we insta-bonded was because we’d both overcome harrowing experiences in high-intensity environments with severe maladaptive narcissists. My career was in politics and media; Nina’s was in tech start-ups. A majority of our colleagues and acquaintances were larger-than-life presences barely masking personality disorders. Even as we swapped stories of how we’d withdrawn from these individuals and cultivated healthier relationships, I could still detect some wariness in the way we approached each other. When you become conscious of a pattern of attracting narcissists, charisma and chemistry tend to make you want to run the other way.

Nina was joking that night at the wine bar when she suggested that we should start making all of the people we meet take a Dark Triad quiz. It’s just as easy as BuzzFeed clickbait like “Which Game of Thrones Character Are You?” A Dark Triad quiz measures the extent to which a person uses others for personal gain, rating the traits of narcissism, psychopathy and Machiavellianism. Naturally, I wanted us to take it right then and there. Why wait to find out if we were going to be toxic and crazy together, too?

I was relieved to discover that Nina did not possess any worrisome levels of the traits. My instincts for picking appropriate friends, colleagues and romantic partners is slowly improving. It’s a process learning to trust my judgment. I like to tell myself that in recent years I have not attracted any new narcissists. I only have old issues with old narcissists! Hey, that’s serious progress.

It has taken an enormous amount of effort and drastic adjustments to reclaim my life from the seemingly nefarious direction it was going in back when I was completely surrounded by narcissists and quickly becoming one myself. In many instances an empath takes on the attributes of the narcissist, but is ultimately able to walk away. For me, walking away has entailed changing the focus of my career, moving to a new city, cutting off relationships, deleting my Facebook account and reevaluating my priorities. I’m still figuring out how I will stand up for what I believe in, how I will relate to others and how I will approach my leadership strategies differently in the future. Free of media moguls, high-profile martyrs, would-be senators, billionaires and all their junior staff hustlers, it’s a lot easier to see things clearly.

Shortly after my 30th birthday in 2011, I realized I was on an unsustainable and undesirable path to becoming as robotic and ruthless as everyone else prattling about politics on cable news and in positions of power. I remember the exact moment I knew I needed to take action, even though actually taking action happened much later. I was standing next to a former UCLA classmate and fellow Daily Bruin alumnus who had also “made it” at the national level. We were on a rooftop overlooking the White House, engaged in some routine incestuous socializing with a few dozen other politicos. I remembered us at 21 in the campus newsroom getting started in the business, when it was about the issues and the truth. At some point my healthy ambition and desire to stand up for my values and fellow Americans had morphed into a web of manipulation and maneuvering. I didn’t like myself or anyone I interacted with on the daily. Even worse, as a collective force we seemed dangerous for the country.

Sadly, I absorbed many of these attributes from my mentors and peers. They were presented as positive skills, and rewarded with bigger jobs and more airtime.

Much has been made about Donald Trump’s narcissism, but it’s absurd to suggest that it’s an anomaly. It’s more like an outgrowth. The entire political-media infrastructure is embedded with narcissists that have only encouraged him and each other. In fact, in my experience, Trump seems more aware of it and transparent about it than many of the concealed narcissists who express their outrage while obsessively monitoring their own Twitter follower count. Whether a narcissist is Trump-like or more stealthy, the behavior is still vaunted as part of the “toughness” and “savvy” it takes to master the American success metric. Especially at scale.

It does take toughness and savvy to succeed, but why are so many often-passionate and even idealistic leaders struggling with personality disorders? There’s much postulation regarding the answer. In my heart, I know how truly fragile it feels to love them, believe in them and confront yourself.

According to psychology, narcissists and their enablers are usually dealing with unhealed childhood trauma. I was raped at 16, and the experience became a defining factor in my socialization and self-esteem. It resulted in many positives, including empathy for others who are suffering, and a desire to make positive change in the world. However, the moment I stepped into a spotlight, the validation and access and control and status created a sense of false immunity. For someone who has been dehumanized and lost her sense of body sovereignty, that might as well be a heroin injection. I still recall standing in Arianna Huffington’s office, where I worked as her chief of staff when she was first emerging as a serious entrepreneur in 2006, and thinking: “You’re like Teflon. No one can hurt you. I will do whatever it takes to achieve that too.”

I tried, but it was all wrong. Not only do all people get hurt, but learning to recover from negative experiences is an essential part of a healthy life.

I wish I could say it’s amazing to do the work to course-correct from the dangerous entanglements of narcissism. It’s not, but it is worth it.

Disengaging and moving forward is lonely and disorienting. You’re constantly tested with new scenarios in which you continue the pattern or not. I have often felt confused, weak or forgotten because I’m no longer a pawn or a player in a high-stakes chess match. I still love and care about many of the people from my 15 years in the industry, and catching up with them or following them on social media can be triggering. More than all of this, though, is the challenge of defining your healthy self and determining how to wield that newfound self-respect and freedom.

I’ll share my process for anyone else who might be on the precipice of a personal breakthrough.

I focused on church. This one was just way above my pay grade. I needed help, and I needed humility. I attended church on Sundays and Wednesdays, and developed a strong relationship with my pastor. Together and in community I was able to achieve a degree of trust and vulnerability that allowed me to access the tough places within that were the source of the problem.

I studied the problem. Gaining an understanding of the dynamics at play helped me identify the patterns so I could stop them. Especially helpful was the book “Disarming the Narcissist: Surviving and Thriving With the Self-Absorbed.”

I listened to my soul and followed up on what it wanted. This is so, so, so easy and also super-hard. We all know our deepest desires, but we’re not always willing to pursue them. It might cost too much money or require upsetting someone else or call for major change. These kinds of things can’t happen overnight, but when you need to get healthy they can happen with persistence. I committed and slowly started taking one step at a time.

I tried new things where it was OK to be a novice. The most surprising development of all was discovering new interests and skills I did not know I possessed. As I continued to listen to my soul, I signed up for sewing and drawing classes. I had no experience whatsoever, and I was initially very frustrated by my own incompetence and mistakes. I learned so much from being in this position. Now, I am making 100 dresses to raise awareness about sexual assault. I never thought I would have the nerve to speak up about the issue that has most impacted me, nor did I ever imagine myself as a fashion designer. It’s really fun, and people have supported me in this form of honest and earnest leadership. It is much more satisfying. Narcissist problems or not, I strongly recommend the experience of being a novice to anyone who feels stuck in their expertise.

I returned to what I liked about my old life from a new place. Look, you can’t just stop caring about what you loved. I am always going to be invested in the social contract, and I’ll always fulfill my responsibilities as a citizen and human being. Eventually, I started writing again. It was tempting to fall back into old patterns, but it also felt familiar and fresh.

It’s been about seven years since that night on a D.C. rooftop when I knew things had to change. There have been ups and downs, relapses and resurgences. How do I know it’s working?

It’s in the little things, like feeling lighter and more optimistic. Trusting the authenticity of people around me, and beginning to believe in change again. Yes, even in this terrible time of discontent and lack of faith in our institutions. I’ve recognized the importance of change within. I believe it’s the only kind of scalable, lasting change.

Also, I scored pretty well on my Dark Triad test. As it turns out, 97 percent of people rated higher than me as a psychopath. About 54 percent are more Machiavellian. (I mean, I worked in politics. Habits die hard.) And a whopping 74 percent are more narcissistic.