So much for the Russian threat: Putin slashes defense spending while Trump plans massive buildup

Despite Western paranoia, Russia's defense budget is about one-tenth of America's — with huge cutbacks ahead 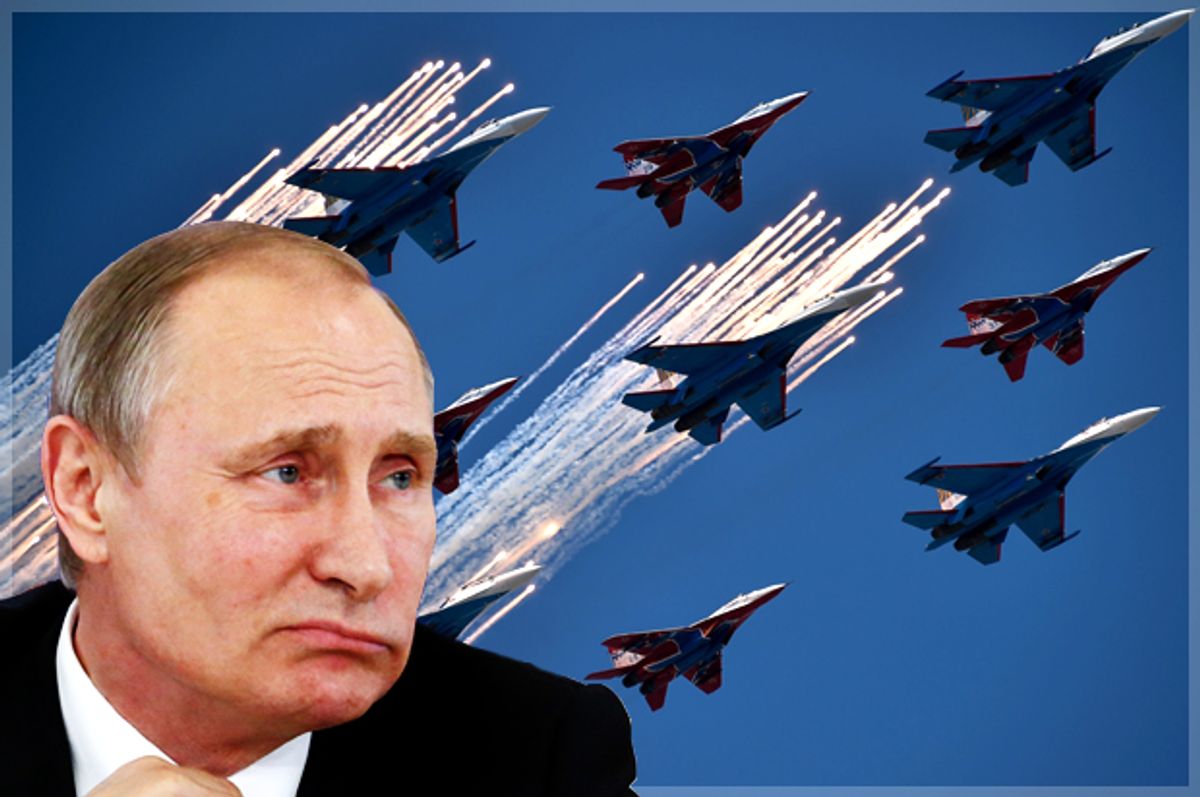 Russia, led by supervillain Vladimir Putin, intent on the domination and destruction of the Western world, has just slashed its defense budget — and no one really noticed.

Figures from the Russian Federal Treasury show that the defense budget has been cut by 25.5 percent for 2017, falling from 3.8 trillion rubles to 2.8 trillion rubles. IHS Jane’s, one of the most authoritative sources on defense news, said the move represents “the largest cut to military expenditure in the country since the early 1990s.”

Let’s put this in context before we move on: The cuts come after significant military budget increases in recent years (averaging about 19.8 percent a year since 2011) as Putin sought to revamp the Russian military and replace a massive chunk of Soviet-era hardware by 2020.

There’s also some quibbling going on over the figures used by Jane’s. Some experts believe the cut is more like 7 percent when the impact of debt repayment to defense industry firms is taken into account.

Either way, the Russian defense budget is being cut — and not insignificantly — at a time when we’re being told Moscow is a grave threat to peace-loving people everywhere. There are a number of reasons for the cuts, the most obvious being that the Russian economy has been put under pressure due to Western sanctions and reduced oil and gas prices. So no, the cuts don’t come from the goodness of Putin’s heart — but it’s clear that he doesn’t see Russia as being on course for major military conflict with the West in the immediate future.

When the cut was announced, it was met with radio silence in the West. A search for “Russian defense budget” on Google News brings up not a single mainstream source that treated this as a significant news story. It’s hard to imagine the same reaction had the news been that Russia had increased rather than decreased its defense spending. Even the most modest increase would very likely have set off a chain reaction of scare-mongering reports about the Russian bear.

The reality is, a decrease just isn’t that interesting because it doesn’t fit with the narrative that the evil Russkies are fully intent on taking over the world, one trembling and defenseless nation at a time.

Military men on both sides of the Atlantic have been using the “Russian threat” to convince governments to throw more money into defense budgets for years. In 2015, the Pentagon used the idea of war with Russia as a public rallying cry to stave off budget cuts. Instead of responding with laughter and the appropriate facts, much of the media advocated on the Pentagon’s behalf, propagating the idea that perhaps the United States really would struggle to match Russian military power in a head-to-head.

In the case of the U.S., the hyping of the Russian threat is particularly ridiculous. Think of it this way: In his first budget proposal, President Donald Trump seeks to increase U.S. defense spending by $54 billion. That 10 percent hike in American military spending would amount to 80 percent of Russia’s entire military budget — and that’s before the recent Russian cuts are taken into account.

The U.S. spends around $600 billion yearly on its military. Russia’s spends one-tenth of that amount, roughly $60 billion. With the new cuts, Russia will go from the fourth-largest military spender in the world to the eighth-largest, falling behind India and France.

So save for the highly unlikely scenario of all-out nuclear war — in which the U.S. and Russia could flatten each other with nukes in a matter of minutes — there’s no need for Americans to worry about a military threat from the Russians.

But restrained analysis doesn't make for good headlines. The fact that Putin is actually cutting Russian defense spending doesn’t jibe well with the more conventional, and sensational, view that Moscow is hell-bent on conflict with the Western world and the destruction of all things right and good.

This is a view that is rarely met with anything other than raised eyebrows in Russia.

Last year I went hiking in the Siberian mountains outside the city of Krasnoyarsk, more than 4,000 kilometers east of Moscow. When I asked our guide if there were ever bears spotted in that area, he nonchalantly answered that yes, there were — but not to worry, there were “only a couple of attacks every year.”

Trying to maintain some sense of composure, I asked what one should do if, hypothetically, one were to meet a bear.

“We would stay still and quiet and then move slowly away,” he responded.

“We could try to sing or clap to scare it away.”

“But you know, sometimes when you corner the bear” --  and here he paused dramatically -- “it will attack.”

Perhaps influenced by too many media metaphors about the Russian bear, I assumed he could be trying to make a political point for the Westerners in his company — a veiled warning that Russia will attack if it feels under threat. So I asked him.

"No!" he said. "And I can't understand why Americans think we have any interest in attacking them!" I had set him off on a rant about Western misconceptions of Russia, and I was put firmly in my place.

Moscow’s budget cuts don’t mean Putin is abandoning the ultimate goal of modernizing Russia’s military. But in the current climate of economic pressure, his targets will become less ambitious — and more cuts are expected in 2018 and 2019.

Discussions of Russian power are almost always infused with irrationality. One minute we’re all but told to prepare for World War III because the omnipotent madman in the Kremlin can’t be stopped, and the next we’re told that Russia is an insignificant regional power led by a tinpot dictator and on the brink of total economic collapse. Rarely do we get anything in between.

What is it about Russia that makes us abandon any sense of rationality? Serious analysts have been (incorrectly) predicting the imminent collapse of Russia for decades, while others simultaneously sow fear that borders on Russophobia over its apparently unique desire and ability to do evil unto the world.

When assessing the “Russian threat” it’s useful to look at that nation in its proper economic and historical context before making wild assumptions about Moscow’s global ambitions. Until we can figure out how to look at Russia with a level head, we’ll never make any sense of it.