Trump's ruined credibility: What happens when the White House just can't be trusted?

President Trump and his aides tell lies and then lie about the lies, which is politically corrosive and dangerous 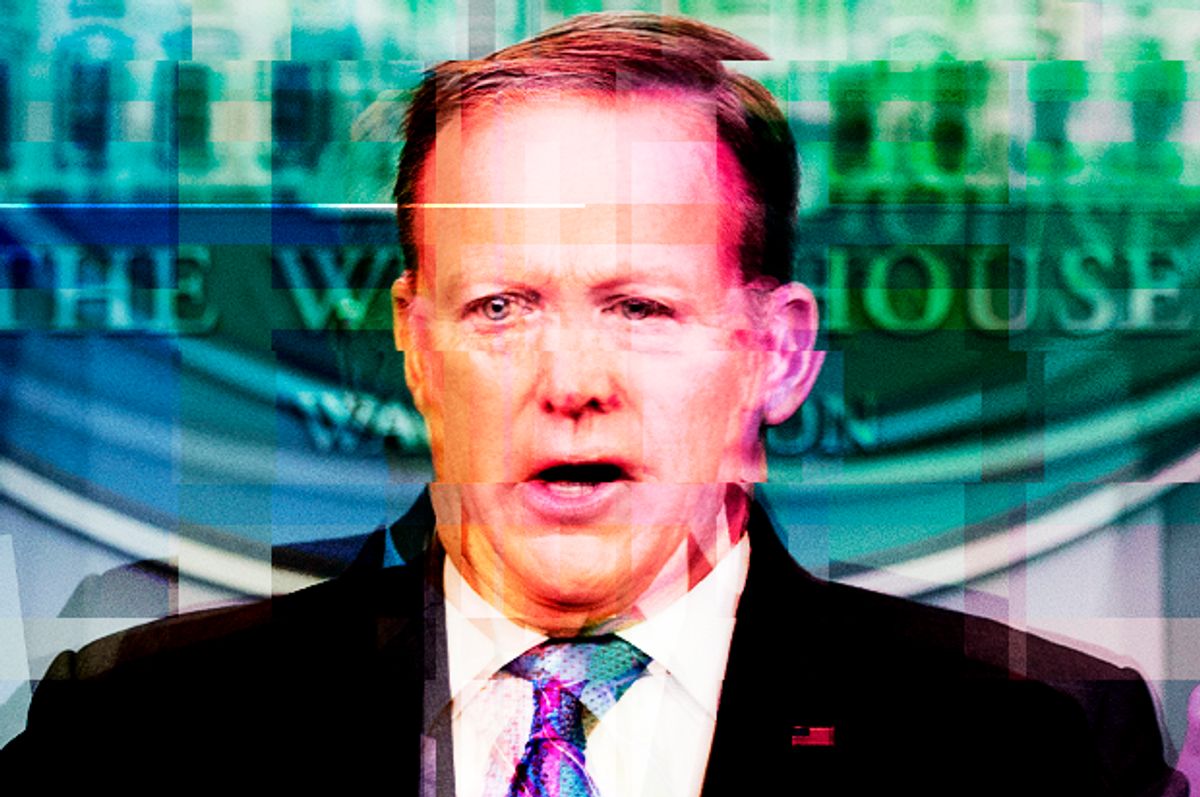 White House press secretary Sean Spicer was in a difficult spot on Thursday afternoon. Just prior to Spicer’s daily press briefing, the top Republican and Democratic members of the Senate Intelligence Committee had announced that they had uncovered no evidence to support President Trump’s allegation that former President Barack Obama had wiretapped Trump Tower during the 2016 presidential campaign. The Senate committee’s announcement came less than 24 hours after Trump himself told Fox News that evidence was forthcoming, and just a few hours after Spicer said much the same thing on talk radio. Faced with this rebuke of the president’s credibility (and his own), Spicer would have to say something.

And, boy, did he let it rip. Responding to a question from ABC News about the Senate committee’s statement, Spicer exhaled a discombobulating fog of media-bias accusations and filibustered at length by reading verbatim passages from selected news articles about other investigations into Trump campaign activities. He accused reporters of ginning up “false narratives” and worked to portray the White House as victims of an anti-Trump press. Then Spicer, perhaps unwittingly, escalated things by referencing an anonymously sourced allegation from a Fox News pundit that Obama had farmed out the alleged wiretapping of Trump Tower to British intelligence.

After deploying this obfuscatory screen of deflections, straw men, split hairs and non-answers, Spicer finally stated firmly that, utter lack of evidence notwithstanding, Trump still stood by his accusation against the former president.

The immediate impact of Spicer’s press conference was to cause an international incident. The British were understandably displeased that a senior White House official went before the cameras and roped their intelligence services into his defense of the president’s unfounded claims of political espionage. The White House apparently tried to explain that Spicer wasn’t actually endorsing the allegation, but just getting it on the record for whatever reason. Trump himself then roped German Chancellor Angela Merkel into his political fight, referencing Obama-era surveillance of Merkel as a justification for his own wiretapping claims.

British officials, meanwhile, put a fine point on their objections. “We’ve made clear to the administration that these claims are ridiculous and should be ignored,” a spokesman for Prime Minister Theresa May told the New York Times.

That quote provides an excellent segue into the broader problem posed by this situation: If the claims are ridiculous and should be ignored, it follows that the people who make those claims or give them oxygen are also ridiculous and worthy of dismissal. But that’s not really an option when the people in question are the president of the United States and his aides. What happens when you can’t take the White House at its word on anything?

We’re not even two months into the Trump administration and already the president and his aides have been caught in a series of credibility-destroying lies. Spicer’s first public comment as press secretary was an absurdly false harangue about the crowd size at the president’s inauguration. Then the White House got caught up defending the president’s easily disproved allegation that millions of undocumented immigrants voted for Hillary Clinton in 2016.

The White House repeatedly contradicted itself on whether its Muslim ban was actually a “ban.” Trump lied about the murder rate in Philadelphia and lied about murders in Chicago. Trump claimed, with no evidence, that the media were not reporting on terrorist attacks, then the White House put out a list of supposedly under-covered attacks, many of which had been covered extensively. Former national security adviser Michael Flynn lied about his contacts with Russia, and then the White House lied about Flynn’s lies.

The root cause of all this discord is, obviously, Trump himself. The president is the source of most of the disinformation emanating from the White House, and he directs his aides to defend his lies and not to cede any ground. This means that White House staff has to formulate responses to retroactively endow Trump’s falsehoods with some semblance of truth. Vice President Mike Pence, for example, is apparently leading an investigation into Trump’s made-up allegation that undocumented immigrant voters delivered Hillary Clinton her popular vote margin.

Now the White House has enlisted foreign powers into its defense over the “wiretapping” scandal — a scandal neither the Brits nor the Germans have any stake in but now have to deal with. Behavior like this erects barriers between the U.S. and its allies, who have good reason to be wary about the political danger that comes with proximity to Donald Trump.

The policies the administration crafts around Trump’s lies have only served to compound the impact of his dishonesty. This is corrosive to governing institutions. A minimal level of trust is a fundamental element of a healthy, functioning political system. People may strenuously disagree with a policy decision or pronouncement made by their elected leadership, but the presumption that the decision was made in good faith — or, at the very least, was not rooted in outright deception — is critical to preserving a sense of legitimacy. It’s impossible to extend any presumption of good faith or honesty to the Trump administration given how many times it’s been caught lying and how unwilling the president is to just admit that he made something up or, at a bare minimum, was wrong.

For politicians who need the president to get their agenda enacted, this is an ongoing and irresolvable problem. House Speaker Paul Ryan went on MSNBC this week to discuss his troubled and awful health care bill, but the ongoing “wiretapping” nonsense meant he also had to answer questions about President Trump’s credibility. “If [Trump] is not credible on this,” Chuck Todd asked him, referring to the “wiretapping” allegations, “how is he going to be credible selling … important proposals?”

Ryan had no answer. “It’s going to be an unconventional presidency,” he said, explaining that “we, as Americans and a society, have not fully processed this new system we have” of the president using Twitter as his primary mode of public communication. Todd laughed at him, saying, “Twitter doesn’t make him make things up!” Ryan responded: “I’m not going to go out there and sort of justify and defend every tweet that’s out there.”

When leaders in Trump’s own party are ducking questions about his credibility, he has a big problem. If a big legislative push fails because of Trump’s radioactive dishonesty, that will poison future attempts to push legislation through. The lack of credibility just keeps compounding on itself, and it will be made still worse by continued lying.

More important, the administration is sabotaging itself in anticipation of the moment when a president’s credibility is critical: a national crisis. The crisis could be of Trump’s own making — one of his lies might spiral out of control and cause an international fracas that’s far more serious than some irked British diplomats and a nonplussed German chancellor. Or it could be visited upon us in some other way — an economic crash, a large terrorist attack, etc.

Irrespective of how the crisis comes about, it will be the White House’s job to coordinate the response and set policy. Those are moments when quick action is necessary and made possible by the presumption of honesty and good faith. The Trump White House might have enjoyed that presumption had it not spent its first months lying about inaugural crowd sizes and making up terrorist attacks.