America has no deep state, and Egypt helps prove it

Like fake news, deep states are real. But the United States of America does not have one. But Egypt does 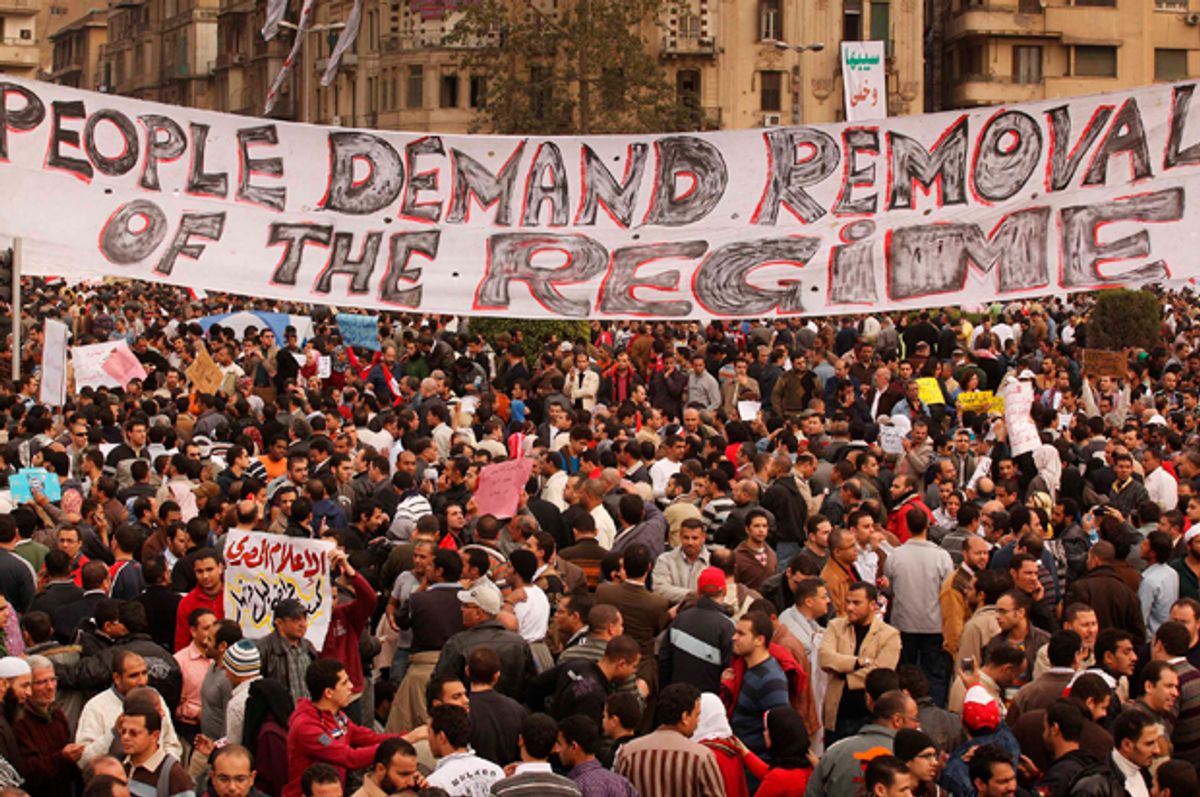 It’s become the phrase of the week: the Deep State, a cabal of anti-Trump ideologues seeking a coup against a democratically-elected president hiding within the warrens of the CIA, State Department, and any other agency that can be labeled as “shadowy.”  The reputed “Deep State” is the boogeyman of the Trumpistas frustrated that their president is unable to enact his agenda instantly and without opposition.

It appeared in December on Brietbart, the alt-right news site, without much evidence to support the claim.  It has again appeared in this wildly distorted, irresponsible piece from the DC Daily Caller, which fails to support itself even as it peddles conspiracy.

The term “Deep State” won currency after the 2011 Egyptian Revolution, when media sources began to debate if pro-Mubarak regime elements might return Egypt to its status-quo ante.  It’s relatively new, and it appears to have originated in the 1990s to describe Turkey’s coup-happy Kemalist generals.

Like the term “fake news,” it has gone viral, and now is being thrown around with abandon.

Like fake news, deep states are real.  But the United States of America does not have one.  By looking at a true deep state, Egypt, we can understand why.

To make a deep state, you need a few key ingredients: like a cake, lacking a critical ingredient like sugar will spoil the dessert.  In geopolitics, it will cause a civil war, or worse.

Deep states can only take hold in very particular places.  They must be secure so a coherent ideology has time to develop and take hold, usually over decades.  The United States and Egypt both have that: the U.S. is secured by two oceans and two peaceful neighbors, Egypt by huge deserts, a treaty with Israel, and weak neighbors to the south (Sudan) and west (Libya).

Both Egypt and the United States do have dominant state ideologies: Egypt is still dominated by crusty old Arab nationalism, while the United States has democratic neoliberal capitalism.  Both states run militaries that are empowered and motivated by their respective ideologies.  If you’re a Brietbart believer of the American Deep State, so far, so good.

Deep states must also exist above strong, well-developed nations with cohesive identities.  Deep states function by manipulating the state, not the nation: they must be able to take the nation for granted.  When a deep state makes a power grab, it can only succeed if it’s playing for a very small set of turf within the state itself.  If it has to navigate between nations, it complicates its work, and risks civil war.  This actually happened in Kemalist Turkey: Kemalist deep state coups led to wars with Turkey’s Kurds, most recently when a coup in 1980 helped bring about a murderous rebellion by the country’s Kurds who felt discriminated against in the aftermath.

Both the United States and Egypt have strong national identities (even if America’s sub-cultures can make it appear otherwise).  Once more, if you’re a believer of the Deep State, the evidence holds up.

Yet that is as far as the comparison can go.  If all you need to believe is that any country with an ideological military and a strong nation can develop a deep state, count yourself convinced.  But if you’re going to bother with critical thought, we must dig deeper.

And a major flaw of the American Deep State theory is that a deep state needs a weak state to survive; America’s is not.

What does a weak state look like?  For one, it’s horrifically ineffective: not a “I can’t believe they made me wait 45 minutes for my driver’s license when there were only six people in front of me” nuisance, but “I can’t believe I had to spend 2 years, $4000, and know an official at the Ministry of Transport via a relative to get my license”-style corruption.  It is a state that fails to provide water, electricity, schools, and roads on a vast scale every single day.  It is thiskind of school system in Egypt, not this outlier from the United States.

It can seem like the United States has a weak state when you compile the many anecdotes of bad roads, bridges, schools, water supplies, and other creaky public services.  But this is misleading: just because you know a lot of stories about a topic doesn’t mean you know anything about its societal scale.

When it comes to the strength of the overarching American state vs. the strength of the Egyptian state, the U.S. comes well out well ahead.  Egypt is a 38th on the Fragile States Index; the U.S. is 158th (with 1st being Somalia).  The United States is 8th on the Human Development Index; Egypt is 108th (the 1st being Norway).  The United States is 18th on the Corruption Perceptions Index; Egypt is 91st (with Denmark as 1st).

All are powerful indicators that the America state, from the local to the Federal level, is more resilient (the Fragile States Index), more capable of delivering development to its citizens (the Human Development Index), and far less corrupt (the Corruption Perceptions Index).

This is not, in other words, a place where a deep state can thrive.  The conspiratorial nature of deep states requires states that are too weak to stand up to insiders, too corrupt to hold themselves accountable,  or too inept carry out basic services.  The American state is not perfect; no state is.  Yet media hype overblows its weaknesses: despite the tragedy of Flint’s water supply, it remains remarkable that a country of 320 million people has had access to reliable, safe drinking water for many decades.

Egypt, conversely, is a state unable to do much beyond basic security.  Cairo, the capital, often suffers blackouts; it has polluted the Nile so heavily that it threatens its own water supply.  These are the consequences of a weak state: poor resource management, terrible services, a place of such bad state governance that a committed ideological military cabal can take advantage.

There is also yet another critical argument against an America deep state: the regular transfer of power.  While the United States has peacefully transferred power since 1789, Egypt has only had a single democratic election.  Egypt has had 5 presidents since 1952: only one of them was not a committed Nasserist (Mohammed Morsi, the ill-fated Muslim Brotherhood president of 2012-13).  Egypt has had over 50 years to plant Nasserist supporters in all branches of a very weak government.

In the same time period, the U.S., has had 13 presidents, alternating routinely between different political parties, which have themselves hardly remained constant (Abraham Lincoln Black Republicans, for example, don’t exist anymore).  The American state has seen real change: while that process can feel slow, the U.S. government of 2017 is a very different place than that of 1987.

In America, “Deep State” is instead code-switching for “geopolitical interest.”

What frustrates Trump and his allies is not a conspiracy of a CIA/State Department/journalists/Democrats/Obama/Pentagon cabal, agenda-driven to impose some secret world order upon the United States.  Rather, they are encountering the hard edges of America’s geopolitical interests.  As the Trump administration and his supporters have long had a wanton disregard for facts, this should be no surprise: delusion has consequences.

Trump complains loudly that too many people are noticing his Russian ties: this is because it is not in America’s interests to align with Russia any more than it has to, especially under the Putin government.  So long as Russia has an independent foreign policy, it will be a threat to both NATO and the American-led world order; only bringing its foreign policy into the American-led alliance system will end that condition.  (As I argue in my book).

Trump also dislikes that journalists notice his cowboy approach to war results in OK Corral-style casualties: the Yemen raid that killed Navy SEAL Ryan Owens appears to have been unnecessary, while more effective Obama-era plans have helped push al-Qaeda out of a key Yemeni port alongside Emirati and Yemeni allies.  It is not in America’s interest to throw around its power simply for the sake of it: the U.S. has now entered an era where it must carefully manage its military prowess to greatest efficiency rather than presume it can steamroll any opposition.

Which is why the Trump administration complains so loudly whenever its policies are opposed.  Trump appears to have believed the president of the United States was not merely the most powerful person on Earth, but actually all powerful, like some kind of modern geopolitical god.  They are not the same conditions: being powerful still means having limits, something that Trump and his allies don’t seem to understand.

As the deep state accusations grow, it would behoove some to visit Egypt, stay a while, and try to get a driver’s license.  That is what a place with a deep state truly feels like.