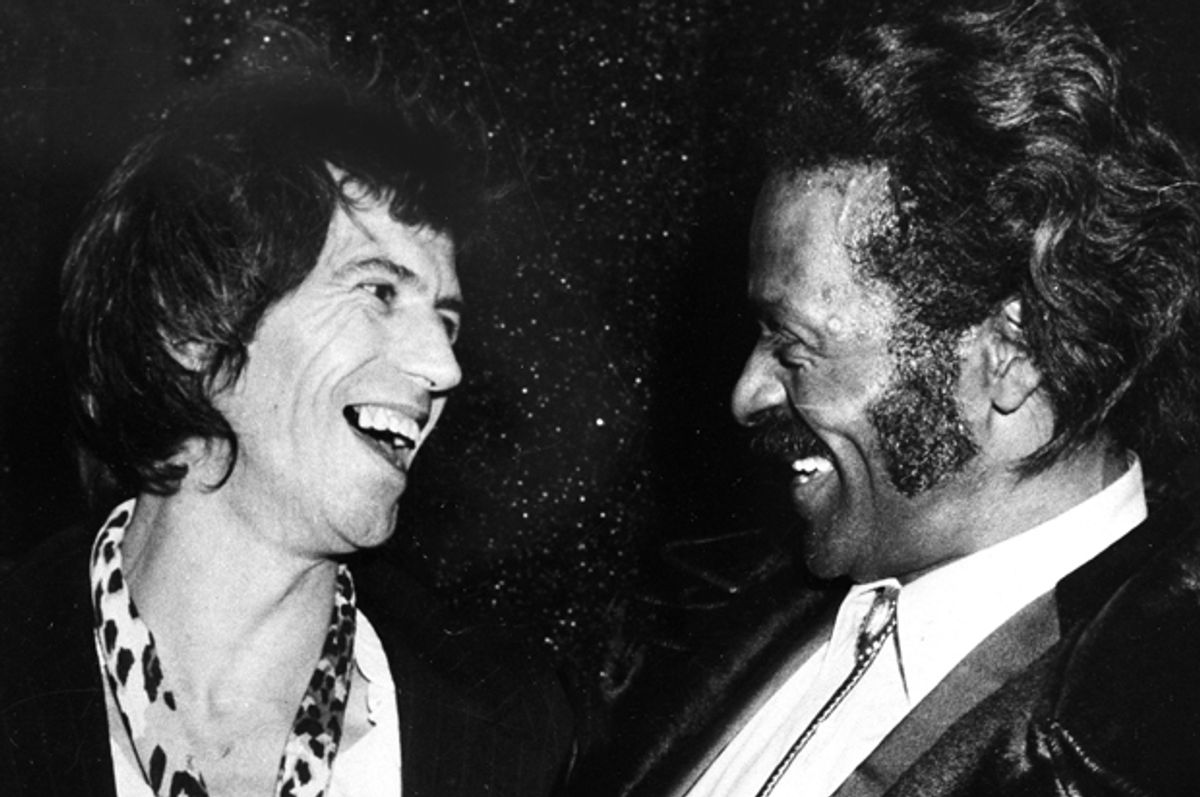 Taylor Hackford’s 1987 documentary about Chuck Berry, “Hail! Hail! Rock 'n' Roll,” is a fascinating window into Berry’s talent, influence, history and personality. The film revolves around rehearsals for a celebratory, star-studded concert for Berry’s 60th birthday at St. Louis’ Fox Theater — a theater that Berry had not been allowed to enter as a child due to Jim Crow laws — and successfully manages to capture the event. The Rolling Stones’ Keith Richards, probably the ultimate Berry acolyte, was recruited as a musical director. Richards and Berry had worked together before. After being exasperated for years by Berry’s habit of working with whatever local musicians could be assembled to back him up, Richards vowed that this time it would be different and pulled together a worthy group of talented musicians.

The film intersperses various interviews with Berry, his family, collaborators, peers and those influenced by him, along with lengthy rehearsal footage and plenty of songs from the main celebration itself. The interviews are illuminating, if not always flattering. Family members share small stories and anecdotes. Hackford gets Berry on camera to ask about his prison sentences, which Berry shuts down. There’s an uncomfortable segment with Berry stating his rules for dalliances on the road, followed by an interview with Berry’s wife, who doesn’t get further than stating her name and how long the couple has been married before Berry (off-camera) is heard shutting down the interview.

But Hackford also gathered interviews that were enlightening and hilarious. Jerry Lee Lewis complains that even his own mother considered Chuck Berry to be the king of rock 'n' roll. “I always thought I was! ‘Well, you and Elvis are pretty good, but you’re no Chuck Berry!’” Bo Diddley and Little Richard get together with Berry, as Little Richard holds forth on racism in rock 'n' roll in the 50s: “You were black, and they didn’t want that black image; their kids were looking up to you.”

“What kids?” Berry prompts him.

“The white kids. They didn’t want this big old greasy black guy out of Georgia, out of Mississippi, or out of Chicago, they wanted their kids to see a smooth white boy looking all pretty,” finishes Little Richard (also known as Richard Wayne Penniman).

And Roy Orbison offers, “It was free-form expression, and he did the same thing with the guitar that he did with his voice and with his writing.”

Representing the acolytes, Eric Clapton earnestly proselytizes about Berry’s importance to the canon (“There aren’t a lot of other ways to play rock 'n' roll than the way Chuck plays it”) and also laments that Berry doesn’t seem to know how much people love his music.

Bruce Springsteen notes, “I learned my first Chuck Berry riff from Keith Richards,” and continues, “I think that his influence on my own writing came out more later on, when I wanted to write the way I thought people talked, because that’s how I felt he writes.” Springsteen then sings a bit of “Nadine,” observing, “I’d never seen a coffee-colored Cadillac, but I know exactly what one looks like.”

The interview and rehearsal footage is interspersed between brilliant, high-energy shots of the celebratory performance, members of the band dressed in custom-made identical suits, with a series of guest stars coming out to share the microphone. Of these, the best are Etta James offering a spine-melting version of “Rock and Roll Music,” Linda Ronstadt reprising her energetic version of “Back in the U.S.A.,” Robert Cray’s excitedly affectionate and perfect version of “Brown-Eyed Handsome Man,” and Clapton’s smooth and elegant “Wee Wee Hours.”

Berry has plenty of time in the solo spotlight. A delightfully raunchy “No Money Down” is prefaced by Berry in his garage, displaying several Cadillacs under plastic and noting that because he couldn’t get the price he wanted for them, he’s saving them, “And in 20 years, I’ll sell them to you for $50,000.” Showcasing the songs and Richards’ skill as a bandleader, Berry also glides through a smooth as silk “Nadine” and executes downright classic versions of “Sweet Little Sixteen” and “Little Queenie.” The band Keith Richards assembled consists of Chuck Leavell on organ, Steve Jordan (from Richards’ own X-Pensive Winos), Joey Spampinato (NRBQ), as well as Bobby Keys on sax and Berry’s long-time cohort Johnnie Johnson on piano.

Nothing about the film was smooth sailing. This was, after all, a film about a man known for insisting on being paid in cash before every performance. Berry routinely did everything possible to complicate the situation.

Shortly after Berry’s death, Hackford shared a reminiscence with The Hollywood Reporter about his star not showing up for an early call until after he had issued a demand for cash and that demand had been satisfied, despite already having negotiated a $500,000 fee from Universal for the music and the rights. “He wanted $2,500 in a brown paper bag,” Hackford said. “It was Saturday. All the banks were closed. . . . It took all morning and early afternoon to get it. Chuck showed up at 3 o’clock. That was his M.O. Here we were to celebrate him, and he did everything to sabotage us.”

And despite 10 days of rehearsals, Richards related, Berry threw all that work out the window, departing from the program the moment he joined the band on the night of the concert.

"Hail! Hail! Rock 'n" Roll" is probably best known for the heated scenes between Berry and Richards during those rehearsals. The two of them had a heated past, a few encounters that always ended up with Richards sustaining some kind of injury. Their blunt interaction in this film is the kind of thing that would never be allowed by an artist representative in a similar situation today, but Hackford was there with more than one camera, getting up close and personal, capturing the adamant discussion between Berry, Richards and others about the way Berry’s amp was set up. Richards is trying to make the case that they’re doing this to make sure the sound for the film is right, but Berry isn’t having any of it.

“Why it’s being done is because it’s not recording well,” Richards says. “And that’s what’s going to end up on the film. That’s why they’re doing it.”

“If it winds up on the film, that’s the way Chuck Berry plays it,” Berry says. “You understand?”

“I understand,” Richards says with an exasperated eye roll. “I understand. You’re gonna live with it afterwards!”

“I been living for 60 years with it,” Berry says with a fair amount of heat, taking off his guitar, stepping up to the stage and pointing sharply at Richards.

“Then realize it,” Berry says.

“This is gonna be here after we’re all dead and gone. It ain’t just you and me,” Richards warns.

“I ain’t dying. Go on and sing your song,” Berry says, sitting down to signify that the discussion is closed.

This discussion is followed by a slightly less heated, but equally contentious interaction as Richards suggests an arrangement of “Oh, Carol” that Berry is dubious about but seems willing to consider, until the song kicks off and Richards doesn’t hit the opening melody line to Berry’s satisfaction. There are a two more false starts before Berry makes a slashing move across his neck and stops the band yet again. “If you want to get it right, let’s get it right,” he says to Richards, as the camera cuts to drummer Steve Jordan, swigging a beer to hide his reaction, and longtime Berry sideman Johnnie Johnson, sitting in front of the piano with a completely placid look on his face that still manages to say absolutely everything.

There’s warmer rehearsal footage with Clapton, Richards and Berry working through “I Don’t Take But a Few Minutes,” where you see the pure joy in Clapton and Richards’ faces, and Berry seems to let his guard down for a few minutes and appears less intolerant of Clapton’s flubs than he was of Richards’.

Later in the film, there’s an interview with Richards in which Hackford asks if Berry thanked him for all of his effort in putting the band together and running the rehearsals. There’s a pause, and then looking out the window Richards replies, “Chuck has his own way of showing appreciation.” And at the end of the movie, after the encore with Berry’s triumphant entrance in a red Cadillac, singing “School Days,” exhorting the crowd to shout “Hail, hail rock 'n' roll,” along with him, Berry looks comfortable and happy. He pulls Richards forward to the mic, “One word for Keith Richards,” Berry says.

“Goodnight, ladies and gentlemen; good night, Chuck; and for the band!” says Richards, with a grin as wide as the stage, before kissing him on the cheek.

Then there's a voiceover from Richards, from an interview held a few hours after the concert’s end: “I’m walking out of this gig feeling very happy," he says. "I wanted to serve Chuck up with a good band, and I did it; that was my gig, no matter what happened. . . . I cannot dislike him, even so. He’s given me more headaches than Mick Jagger. But I still can’t dislike him. I love him. I love his family. And I’ve done what I wanted to do for him. Now I’m going to sleep for a month.”