Trump's budget proposes many ways to punish the poor. It's a new version of the Nazi urge to purge "parasites" 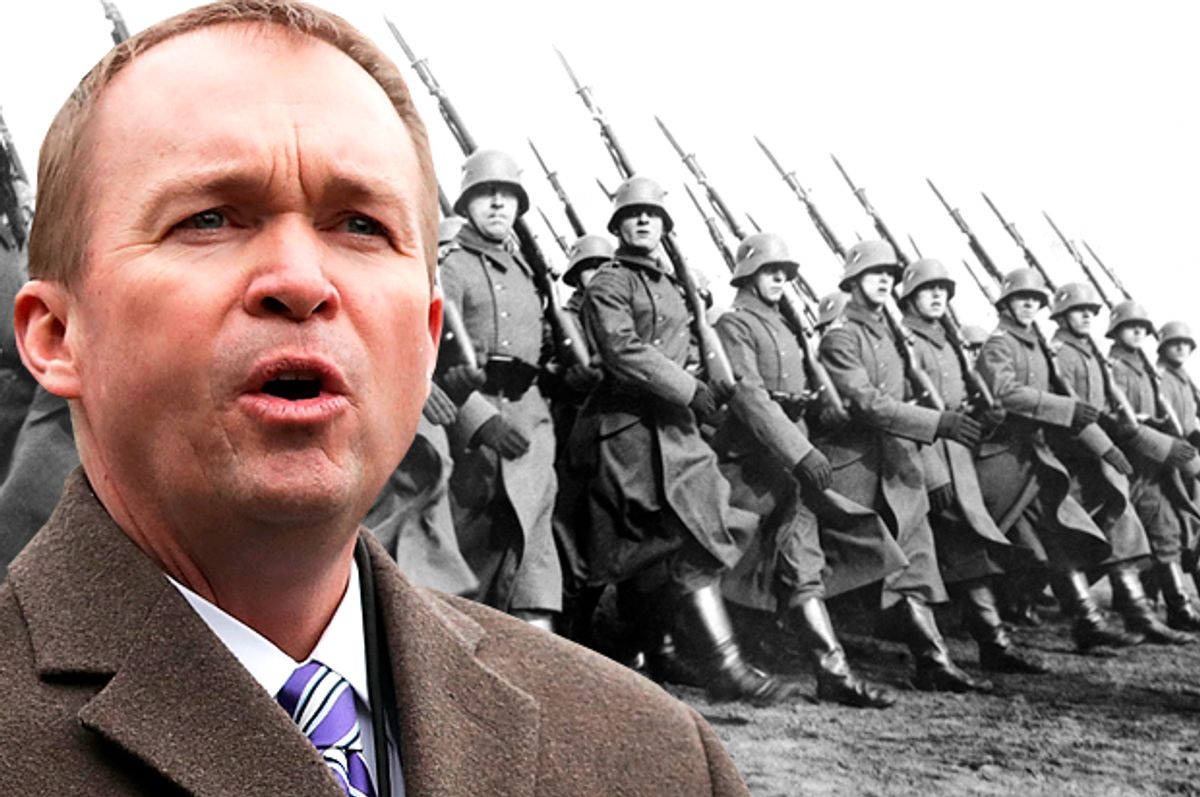 A nation's budget is a statement of priorities and values. President Donald Trump's proposed 2018 budget is a declaration of war on the human beings his administration and the Republican Party consider to be "useless eaters."

As I wrote four years ago, some 15 million Americans were "food insecure" during 2012, and over the Great Recession that number increased 30 percent:

Approximately 20 percent of American children live in poverty. Food insecurity and hunger leads to a long-term decline in life spans and a diminished standard of living for whole communities.

Last week, Republicans in the House of Representatives voted to cut $39 billion from federal food assistance programs. Their vote is more than just the next act in the ongoing politics of cruelty by the Republican Party in the Age of Obama.

It is a decision to kill poor people. . . . Here, the long-term end goal for Republicans is revealed for what it is — a desire to make being a poor person into a crime.

This is a neat summary of the broader values held by Republicans today, as repeatedly signaled by their use of language like "makers and takers," "job producers" and Mitt Romney's infamous reference to the unproductive and parasitical "47 percent." This hostility towards the poor and working classes (especially people of color) is also revealed by policies such as Republican efforts to require sick people to show that they have jobs or are seeking employment in order to receive Medicaid benefits.

Trump's proposed 2018 budget is not an outlier or aberration: It is the logical next step in a decades-long assault by the Republican Party and conservatives on vulnerable and disadvantaged people in America. To that end, it proposes reducing or eliminating programs that feed the elderly, provide heating assistance for poor people, aid the homeless and help educate poor children.

The Washington Post summarized this perfectly, "If you’re a poor person in America, President Trump’s budget proposal is not for you." Right-wing economist and black conservative mascot Thomas Sowell put it more bluntly in 2012: "No society ever thrived because it had a large and growing class of parasites living off those who produce."

With the election of Donald Trump and the even more extreme rightward turn of the Republican Party, matters are now far worse than I would have ever dared to imagine in 2013.

My use of the words "useless eaters" is intentional. "Useless eaters" or "Lebensunwertes Leben" was the term used by Adolf Hitler's Nazi regime to describe human beings considered to be a drain on public resources. The designation of "useless eaters" was a foundational component for the Nazi racial project and the "Final Solution."

I am not suggesting that Donald Trump and the Republican Party will order forced sterilization or eliminate "undesirables" en masse. The notion of "useless eaters" must be implemented within the United States' current social values and political system. Under the logic of neoliberalism (in which human worth is reduced to a person's value in terms of economic activity), American conservatives deems the poor, the unemployed, the homeless, people on Social Security, those who need help from programs such as food stamps and ultimately anyone who is not "economically self-sufficient," that is rich, to be expendable.

The Nazis argued that killing those with disabilities or mental illness and other groups of people was an act of "compassion." Last week while answering questions during a press conference, Trump's budget director, Mick Mulvaney, appeared to suggest that Meals on Wheels, which feeds poor elderly people in their homes, or after-school programs that feed low-income children, were programs that "sound good" but "cannot show that they actually deliver the promises that we’ve made to people.”

In the face of widespread criticism, Mulvaney has claimed that was not exactly what he meant. He definitely said, however, that no longer asking taxpayers to pay for such programs was "probably one of the most compassionate things we can do."

Although separated by almost eight decades — and couched in more careful language this time around — these beliefs and attitudes exist not too far apart on the moral and ethical continuum.

Trump's proposed budget and the Republicans' proposed health care bill will diminish the life chances, life opportunities and life spans of tens of millions of Americans. It has been estimated that the Republican plan to repeal Barack Obama's Affordable Care Act would kill 43,000  people a year. Republican economic and social policies will also worsen the already extreme level of wealth and income inequality in the United States. This, too, will likely shorten life spans.

Moreover, the Republican war on the poor cannot be separated from the way poverty is racialized in the United States. As social scientists such as Martin Gilens have repeatedly shown, African-Americans and other people of color are stereotyped by the news media and (white) political elites as "welfare queens" or "lazy" and thus as taking resources away from "good," "hardworking" white people.

In this framework, to punish the poor is to hurt black and brown people — even if the reality is that white people disproportionately benefit from the social safety net and programs such as welfare and food stamps. Historically, the psychological wages of whiteness have often blinded white Americans to the economic harm that anti-black and anti-brown racism does to them as well. This old habit continues mostly unabated in the 21st century.

There are other disturbing connections between the political imagination of the Nazi regime, Donald Trump's administration and the ideology of the Republican Party.

The Republican Party is America's largest de facto white identity organization: As part of a 50-year backlash against the civil rights movement, Republicans have fully united conservatism and racism. Despite the sentiment that Donald Trump is not a "real" Republican, he conquered the party and used its traditional weapons — white racism, nativism and overt bigotry — to win the White House. On numerous occasions, Trump has publicly channeled the pseudoscientific ideology of early 20th-century white supremacist and eugenicist Madison Grant. Predictably, Trump's election resulted in a record increase in hate crimes against Muslims, Jews, Latinos, African-Americans and LGBT people across the United States.

Some of Trump's closest advisers are members of the white nationalist "alt-right" movement.  This inner circle includes White House strategist Steve Bannon, who ran the right-wing website Breitbart News as a home base for white nationalists and white supremacists. Bannon has repeatedly cited books such as "The Camp of Saints," which argues that South Asians and other nonwhites in Europe should be eliminated, as heavily influencing hiFs views on immigration, race and ethnicity. Bannon also admires the noted French anti-Semite Charles Maurras.

Sebastian Gorka serves as one of Trump's top advisers on terrorism. He has been photographed wearing a medal associated with an Hungarian organization that collaborated with the Nazi regime during World War II. Gorka has also been linked to anti-Semitic political parties in Europe.

Michael Anton is a senior national security adviser for Donald Trump. Under an online pseudonym, he has argued that "multiculturalism" and "diversity" are existential threats to white Christian society. Predictably, Anton's writings on the subject are popular among white supremacists because they nurture fantastical and delusional fears about "white genocide." Another Trump senior adviser is Stephen Miller, who, according to reports, collaborated with the future neo-Nazi leader Richard Spencer on various political projects when they were in college. Spencer has proclaimed that Miller is a great ally for the white nationalist cause within the Trump administration.

Donald Trump and the Republican Party want to punish the poor and kill the "useless eaters" in order to fatten the already bloated wallets of the rich and the powerful. Ideology is likely secondary to this goal. Trump is not a doctrinaire thinker; he is driven more by greed and a lust for power. For many contemporary Republicans, a career in government and "public service" are but a means to those ends.

To find the historical and philosophical antecedents for Trump and the Republican Party’s “War on the Poor” is not an act of hysteria or hyperbole. It is an effort to call attention to how today's Republican Party and its leader Donald Trump are dangerous, backward-thinking radicals. The United States Constitution was created "to form a more perfect union, establish justice, insure domestic tranquility, provide for the common defense, promote the general welfare, and secure the blessings of liberty to ourselves and our posterity."

In the twilight of their democracy, the American people must now confront an existential question. What will they do when one of the United States' two main parties has betrayed those values, and the president displays utter contempt for the standing norms and principles of democratic governance and civil society?