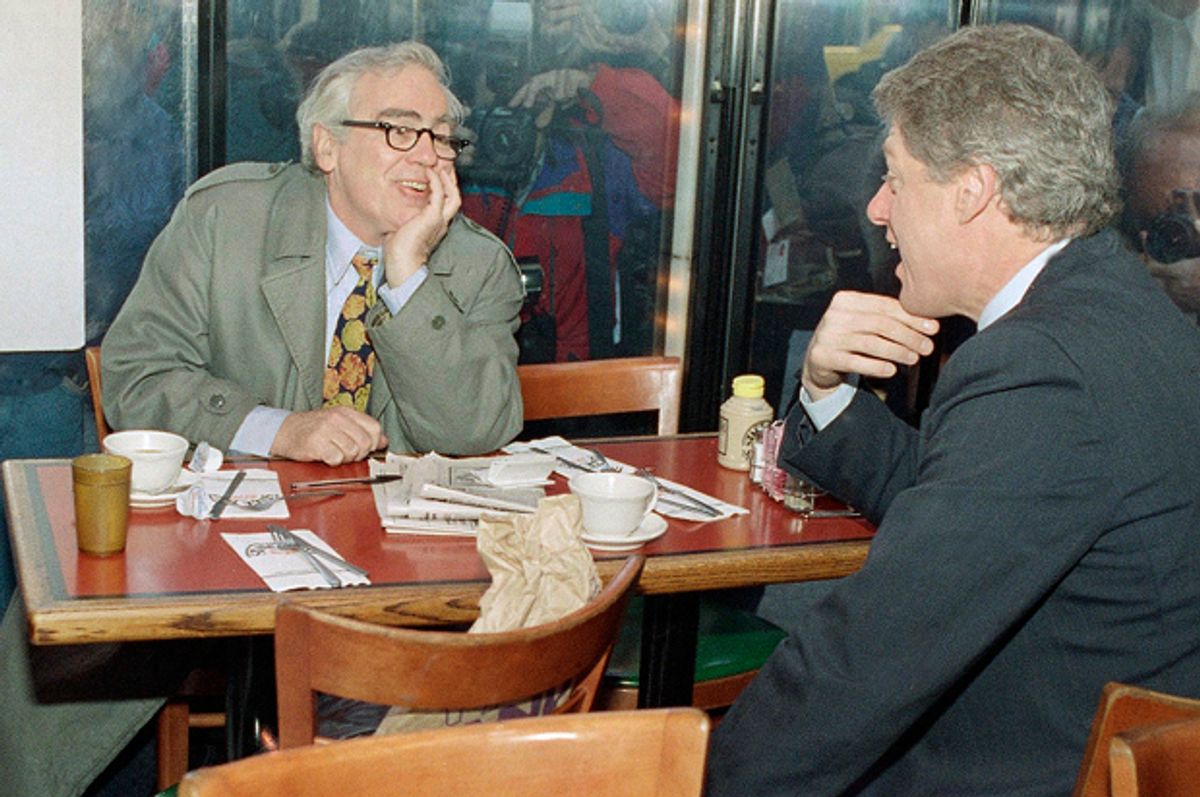 It starts, as it usually does, with mysteries contained in a book. It’s a small, yellowing green and white hardcover called “The Gang Who Couldn’t Shoot Straight” with a dust jacket illustration of a twisted revolver morphing into an angry face with three-quarters of a smoked cigarette dangling from its sneering bottom lip. It’s on the top shelf resting exhaustedly against a Thomas Wolfe paperback called “The Web and the Rock.”

The teenaged me pulls it down and steps through the wardrobe, through the looking glass, and out of my coddled Brooklyn Heights existence and into a different Brooklyn. Only a few hundred yards between my apartment on the top of a hill and the docks of Red Hook that Jimmy Breslin wrote about but there was an entire universe between us. The accents of my grandfather. The stories of my great uncles. The songs my mom sang in our galley kitchen when she didn’t think anyone was listening. My pop telling me about stickball and ringolevio, headlines shouting, “Headless Body in Topless Bar!” garbage strikes, Joey Gallo runs the five families and Big Paul gets clipped by Sammy the Bull and that other guy outside Sparks Steakhouse and “shine a light or I’ll never get back to Brooklyn.” I was more than hooked; I wanted to be there and never leave.

I was 16 I think when Breslin won his Pulitzer and he was simply everything that being a part of the great continuum of New York meant. He was what I aspired to be. I met him once. It was at a bar called Eamon Doran’s on Second Avenue in the city. A mentor at my high school had some connection and took a couple of us to hear a reading of something. The bar was the home of the legendary First Friday club and, I think, the Old Farts Club and there he was, bellying up, exactly like he was supposed to be. Mid-story, with enrapt listeners, glass in hand, tie askew, cigarette in a cracked brown FDR-like holder dripping with saliva, thick bushy brows and wrists, round in the middle, sure, but you probably wouldn’t want him to hit you with those meat hooks.

He was shouting, agitated and upset but when you were close enough to hear, he was actually just talking about the Mets game. He wasn’t tall and wasn’t physically imposing. He didn’t walk, he rolled — sailorlike — side to side, he twinkled (no, really, he really twinkled) and he said hello or “heyhowwarya?” to everyone he passed on the way to the bathroom. His shoes were cracked and battered, worn at the heel like the Chandler character gumshoe he was.

He looked rumpled when he wasn’t, like he’d slept in his suit. He talked like it was a competitive sport and his job was to beat you into submission. About anything. Everything.  Stories, not jokes, stories that start with “So I sez to tha’ guy. . .” Women, if appropriate, were called “broads.” He actually said that. It wasn’t just a Damon Runyon line; it was Breslin at the bar in 1987.

But then there were those eyes. The eyes of a man that had been lied to a million times, still seeing everything, taking it all in. Educated? I have no idea. But shrewd and wily and perceptive. This is the guy the Son of Sam went to when the murderous schlub didn't think he was getting his due for his summer-long killing spree. Fancy that.

Those around Breslin would tell you their pieces of the tale: “Hey, did you know he ran for office? Yeah, he and that asshole Mailer. They both lost.”

“Did you see his beer commercial? It's great, even if Piels tastes like old piss.”

“He doesn’t really dance with the ginger lady any more because the drink took his father young but when he gets with Hamill?  Give 'em a wide berth, boyo.”

To me, he was New York. The old, the real New York. Combative and scrappy with everyone and to anyone. Shirt sleeves rolled up, smoke from a stogie curling toward the stained pressed-tin ceiling. Explosive outrage a second away at all times. Dismissiveness the default mode. Watch him interview anyone; he shouts “NO!”  throughout. Questions are answered with: “I don’t know, not my point!” Responses are “That’s what I’m telling youse!” over and over.

Someone asks him what he thinks about the RICO statutes, he says, “TERRIBLE!”

“But why??” the civilian next to him asks.

“FASCISM!” he sputters into the guy’s face.

No punches pulled when they’re thrown.

Was he a bleeding heart liberal? Gettouttaheah. Breslin and his clan were pure old-school Tammany lefties. Mostly Irish-Americans but not the point; immigrants, mostly, strivers all. City people — Irish, Italians, Puerto Ricans, Jews, blacks — doesn’t matter where they’re from because they become the city. An alloy of "what was" becoming "what is." Harder. Forged by graft and sirens and the subways and the smell of asphalt in August. The little guy gets screwed by the big guy and I like my stories to talk about how the individual beats the system. Raise a glass to us, and those like us standing up against a machine that tries to grind us to soot.

Combative, yeah, but not in the way that sports fans argue, too obvious, but in the way that a New Yorker would definitively declare where you can get the best steak or hot dog or martini, a Black & White. Traditional morality is for suckers. Breslin once suggested that the Mafia should shoot all the bankers because then everybody wins. New York morality. Stealing from a rich asshole is entirely OK. Provided that he's an asshole.

So what matters then? The work. Doing the work. Knowing the people, words as bloodstained, fight-chipped cudgels underlined with saloon sawdust. Minimal, sparse, hard-hitting, clear-eyed, unflinching, eloquent. Putting in the hours. Knowing the players. Calling the guy who knows the guy. No one was better at his craft than he was. Ever. Telling the story. Not the news, let a kid do that, but getting behind it, focusing on the people who made it.  Great sports victories told from the perspective of a guy on the losing team who didn’t even get to play. The JFK assassination from the perspective of the gravedigger. An AIDS patient as a human, not as a contagion vector back when that just was not done. Creating the tale of the city; this thing that all of us together made. Our thing. He and his clan — Pete Hamill, both the McCourts, Murray Kempton and Joe Mitchell were the voice of 20th-century New York. A New York dimmer now, faded to yellow.

The New York that a lifetime later still mourned the departure of the Dodgers and that will never heal, not entirely, from 9/11; the New York that backs the Mets because the Yankees are the team the suits like. A city of big hearts and grudging respect and shut the fuck up about it and have a drink and let’s tell a story about it later on. A city of cops, and wise guys, of "friends of ours" and mutts and mooks and straights, and the man trying to stick it to the little guy and where the biggest insult you can use is to call someone a mark, a sucker. A city beyond just Manhattan, meant to be chronicled and detailed. An island unto itself, unlike any other. Cynical and jaded, but a sucker for stories about the little guy. Hard-bitten, yeah, sure, until someone plays that song or starts telling stories about their dad. Then watch the tears start. The hard heart of a tough city. Gotham. THE city. Stand up, order your drink and take your place, sing your song, fight your fights.

Breslin was in so many ways the idolized version of what we all wanted to be. Or thought we were. Brash, irascible, judgmental, itching for a righteous fight. But also whip-sharp, diamond-cutting prose stripped down to truth-imparting essence. No mixed drinks here — a shot of Jameson’s in a chipped beveled glass with a cold one back. Unflinching. The truth is there or it isn’t, in things and in people. It was everything that being an adult represented to me as I took my turn in front (and behind) the bar. Listening, watching, seeing, explaining.

So last orders, gents. This one’s on Jimmy. Sláinte.

Besides bartending, Nick Birnback has spent the last two decades away from Brooklyn working for the United Nations in war zones as a mediocre press flack and full-time trouble magnet.