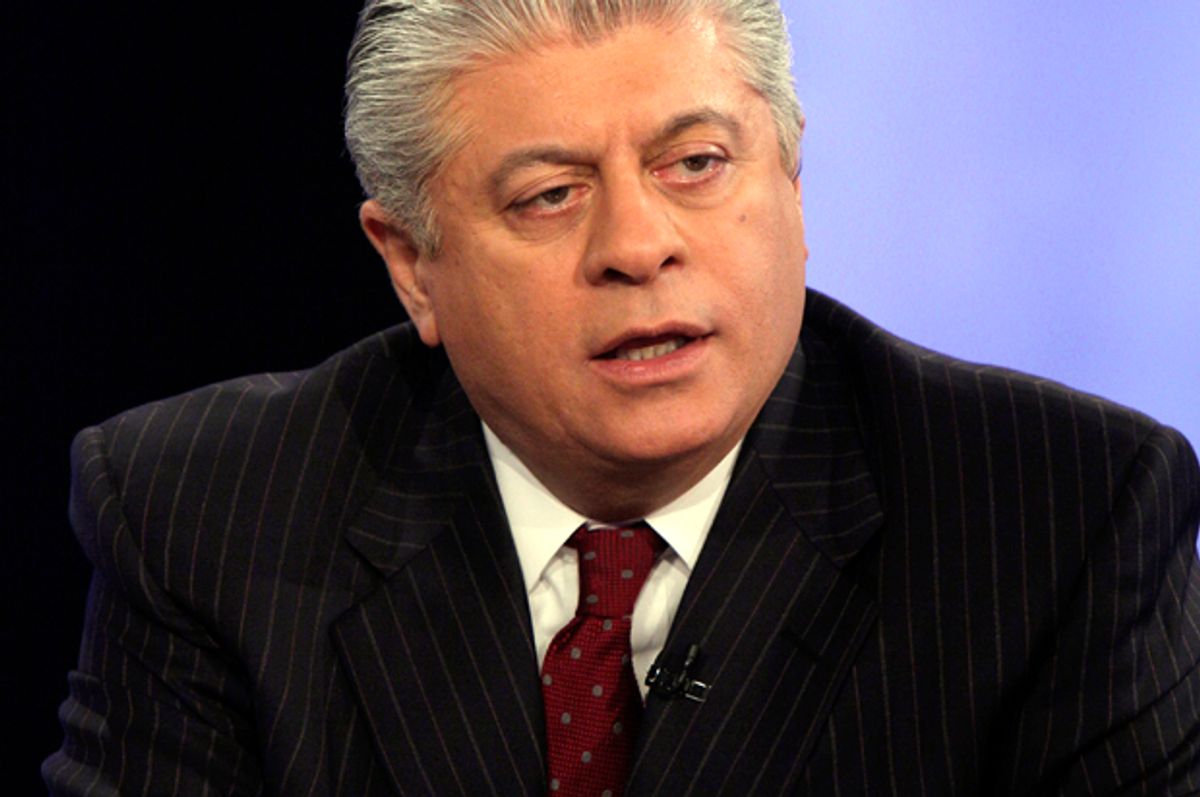 Napolitano’s claim, which he first made a week ago on an episode of “Fox & Friends,” was quickly picked up and repeated by White House press secretary Sean Spicer and later the president himself.

Multiple high-level U.S. and British intelligence officials have flatly denied the accusation. The president, who has access to any top-secret document that he wishes to obtain, has offered no evidence to substantiate the claim. Instead, he has repeatedly referred to Napolitano.

“All we did was quote a certain very talented legal mind who was the one responsible for saying that on television,” Trump said at a Friday news conference. “And so you shouldn’t be talking to me, you should be talking to Fox.”

For their part, Napolitano’s bosses at Fox News have also denied his claims. On Friday, the network’s lead news anchor, Shepard Smith, said on air that “Fox News knows of no evidence of any kind that the now-president of the United States was surveilled at any time, in any way. Full stop.”

Since that denial, Napolitano has not made an appearance on the conservative-leaning news channel.

This isn’t the first time Napolitano — a former state judge who, according to reports, made Fox News install wooden bookshelves and paneling in his studio office to resemble a judicial chamber — has made controversial statements.

A long-time supporter of fringe Republican Ron Paul, Napolitano has attracted criticism for his scathing attacks on Abraham Lincoln. (Napolitano has argued, for example, that Lincoln ought to have purchased all the slaves from their white owners rather than waging war against the secessionist South.) He has also promoted conspiracy theories about 9/11 and even claimed that voting is not a fundamental right of Americans.

As for the basis of Napolitano’s claim, it appears to be derived from secondhand information he obtained from a discredited former CIA officer named Larry C. Johnson, who has previously spread conspiracy theories that former Secretary of State John Kerry committed rape while serving in Vietnam and that Michelle Obama was once caught on tape making racist statements against white people.

Napolitano is one of many far-right conspiracy theorists who have been repeatedly praised by President Trump. For instance, Trump has frequently endorsed and appeared on the program of radio host Alex Jones, a man known for claiming that lizard people secretly control the world and that the Sandy Hook school massacre in Connecticut may have been faked. “Your reputation is amazing,” Trump said in a December 2015 conversation with Jones.

Trump has also paid tribute many times to Joseph Farah, the proprietor of WND, a website known for spreading falsehoods about soy-based products turning children gay and disseminating numerous biblical and racist conspiracy theories. WND was also deeply involved in propagating the false "birther" hypothesis that Barack Obama was not born in the United States, which Trump exploited to launch his political career.

Unlike the many other times when Napolitano or other network commentators have made embarrassing remarks, this particular incident is notable for how quickly Fox News has distanced itself from this senior employee. That may reflect the fact that Rupert Murdoch, the founder and executive co-chairman of Fox News' parent company 21st Century Fox, is now involved in sensitive negotiations with the British government to acquire full ownership of the international broadcaster Sky.

Currently 21st Century Fox owns 38 percent of Sky. In December, 21st Century Fox  announced it wanted to exercise a contractual right to acquire the remaining shares of the company. That takeover bid is now being examined by the British government. Instead of approving it, U.K. Culture Secretary Karen Bradley has referred it to an anti-trust agency for further review.

It’s not unreasonable to speculate that Napolitano’s baseless accusation — and the resulting wave of bad press for Fox News and Murdoch — may have had an impact on that decision.