Liberal shaming of Appalachia: Inside the media elite's obsession with the "hillbilly problem" 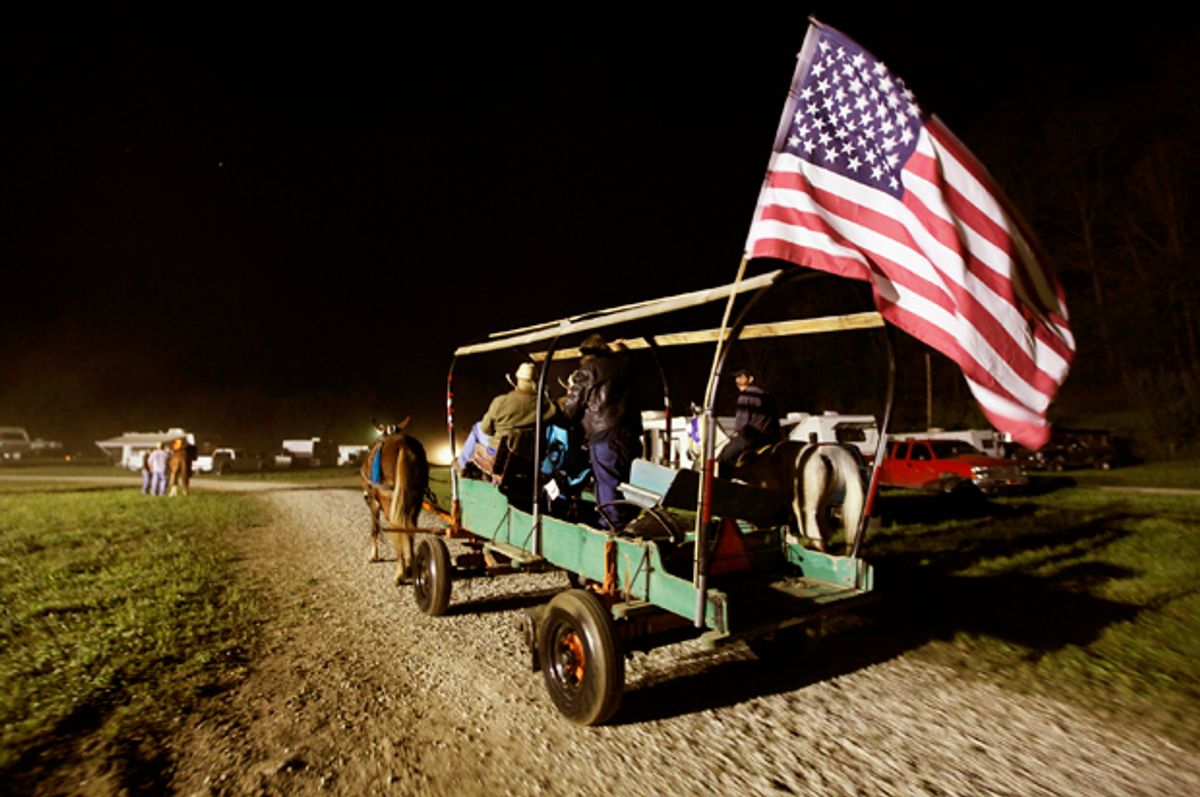 The self-sabotaging residents of Trump Country have run out of good will from #TheResistance, according to critic Frank Rich in a recent essay for New York magazine. In “No More Sympathy for Hillbillies,” Rich argued that the presence of “Trumpists” in Appalachia and the Rust Belt justifies cutting off these regions and individuals from the body politic. “Let them reap the consequences for voting against their own interests,” Rich suggested, as he outlined an earth-salting breakup fantasy that included follow-up reminders to those of us who live in these regions that we are equally loathed by both the right and the left.

Rich’s essay is the latest offering in a long line of authors using their bylines to muse on what they see as the country’s “hillbilly problem.” This trend, which last week included a bizarre hit piece by Kevin Baker in the New Republic on progressives in Appalachia, follows a predictable pattern: The authors establish a region in Appalachia or the Rust Belt as ground zero for the archetypal Trump “hillbilly” voter while walking through what they see as paradoxes of our politics or lack thereof, before concluding with their wisdom on what should be done about us.

It’s only on this last point that opinions usually differ. Photographer Chris Arnade, for example, became well-known during the election for ascribing Trump’s appeal to a sense of tribalism in communities that formed in the absence of understanding or empathy from liberal elites. Best-selling “Hillbilly Elegy” author and Republican up-and-comer J.D. Vance has shared a similar view, specifically one of  Appalachian suspicion of outsiders. Media outlets often celebrate Vance as the “reluctant interpreter of Trumpism” in a way that endorses his belief that a “sympathetic but hard-nosed” approach to Trump voters is the way forward in our political moment.

For Kevin Baker, however, the only reasonable solution is complete social and political divorce from states contaminated by majority support for Trump, and it seems that Frank Rich would agree. Collectively, these pieces and others have resurrected a dormant political genre. The “What’s the Matter with Appalachia?” piece, written by disapproving outsiders with little knowledge of the region’s politics or history, is back, once more, with feeling. Currently, the pundit class is waging a self-made war over appropriate emotional response to the anticipated suffering of Trump voters and individuals like me who share their communities.

Why is this genre so popular, particularly among the liberal elite? Let’s look at the phenomenon through the most generous lens. There’s always a need for good faith political knowledge exchange and Appalachia does indeed have interesting and at times disappointing politics. A closer examination of working-class politics is long overdue by the establishment and we need more individuals earnestly engaging with other smart people about these neglected topics and regions. Finally, a healthy dose of anger toward Trump voters is very reasonable among individuals — people of color or immigrants, for example— whose personal freedoms and safety are imperiled by his administration. This, however, is not what the genre looks like.

What this genre looks like is pundits who are almost universally men and almost exclusively white, firing off sleazy ideas about “hillbillies” while doing a very poor job differentiating between Trump voters and the average sort of disadvantaged person who lives in Appalachia or the Rust Belt. I use the word "average" intentionally because these pieces ignore the fact that most people in these regions — just like the majority of people across the nation — did not vote for Donald Trump. This genre ignores the fact that marches, town halls and protests are happening here just as frequently as in New York. And this genre trades on a bad-faith sleight of hand that displaces the reality that the average Trump voter is a college-educated white individual of some means, not a “hillbilly.” The sole reason for this genre’s existence is to provide the liberal elite with the means to feel superior to poor people, of all races, without sounding like Jason Chaffetz.

This genre has a long history, a fact that has also been ignored by the authors who populate it. Appalachia, which is often treated as a predominately white and dysfunctional nation within a nation, has always provided what historian Ronald Eller called the “grist for the media mill.” It’s far less unsettling to blame what are ultimately the failures of technology, the free market and our social responsibilities to one another on backward and provincial people who live in an “other America.” This is a compelling reason for why Kevin Baker, for example, likely feels justified in writing a 2,000-word hit piece on a county in West Virginia that yielded just 4,629 votes for Donald Trump when his neighbors in Staten Island provided a hundred thousand.

Add to this all the cultural baggage that comes with being a “hillbilly” — lower educational attainment, squeamishness over regional accents, coal worship, banjo jokes — and you have the perfect scapegoat for a political tilt experienced by all white people during this election. The odiousness of this genre’s popularity is that it eliminates any productive discussion of actual problems by centering the real issue its authors have with the region: namely, that a fraction of the people in this country with repressive political views who look too much like them for comfort live here.

Apart from all the bloodletting over our recent election, no historical moment illustrates problems with regional perceptions held by liberal elites than the Johnson administration’s "War on Poverty" during the 1960s. Flush from a new professionalization of the social sciences, experts concluded that the causes of poverty could be explained more productively through the psychological pathology of the poor and their culture, rather than economic inequality or political corruption. The government sent young and earnest volunteers into Appalachia to fix up schools and churches and roads in the hope that these improvements could provide the behavior modifications necessary to lift us out of poverty. Although brimming with good intentions, these sorts of solutions never considered the fact that if coming up with the path out of poverty were as simple as repairing a window screen, our grandparents would have tried that before presidential intervention. These solutions didn't take into account the price of a vote in a rural community and compare that with the cost of a window screen.

Every generation of politicians, writers, analysts, academics and economists believes it has discovered something unique or horrible or paradoxical about Appalachia. And members of each generation of these thinkers is at war with themselves to decide if we’re worthy enough for their solutions to our problems. These solutions, however, never work because they’re almost always premised on the belief that Appalachia is fundamentally different than the rest of the country, not part of it. And so we repeat a frustrating cycle: Our self-appointed social betters interpret our reluctance to embrace their solutions as an act of bad faith and we suffer economically from their withdrawn support.

In our current moment, the liberal compulsion to hold up the disadvantaged Appalachian or Rust Belter as a stand-in for all Trump voters while arguing above his head how much sympathy we’re allowed to have with him eliminates any productive exchange of resistance politics among progressives. Whether progressive elites want to acknowledge this reality, the fact is that we all live in Trump Country now. Those of us who have resisted the incursion of these politics for far longer should be seen as important allies. If Kevin Baker wants people willing to envision a future without coal, or if Frank Rich wants to find readers fed up with “Hillbilly Elegy,” our regions can provide them in droves. That we remain invisible to these critics is a sign of their bad politics, not ours.

Elizabeth Catte is a writer and historian from East Tennessee, and author of "What You Are Getting Wrong About Appalachia," forthcoming from Belt Publishing. She holds a PhD in public history.