"You have gone to great lengths to disagree with your colleagues," one senator told Gorsuch. 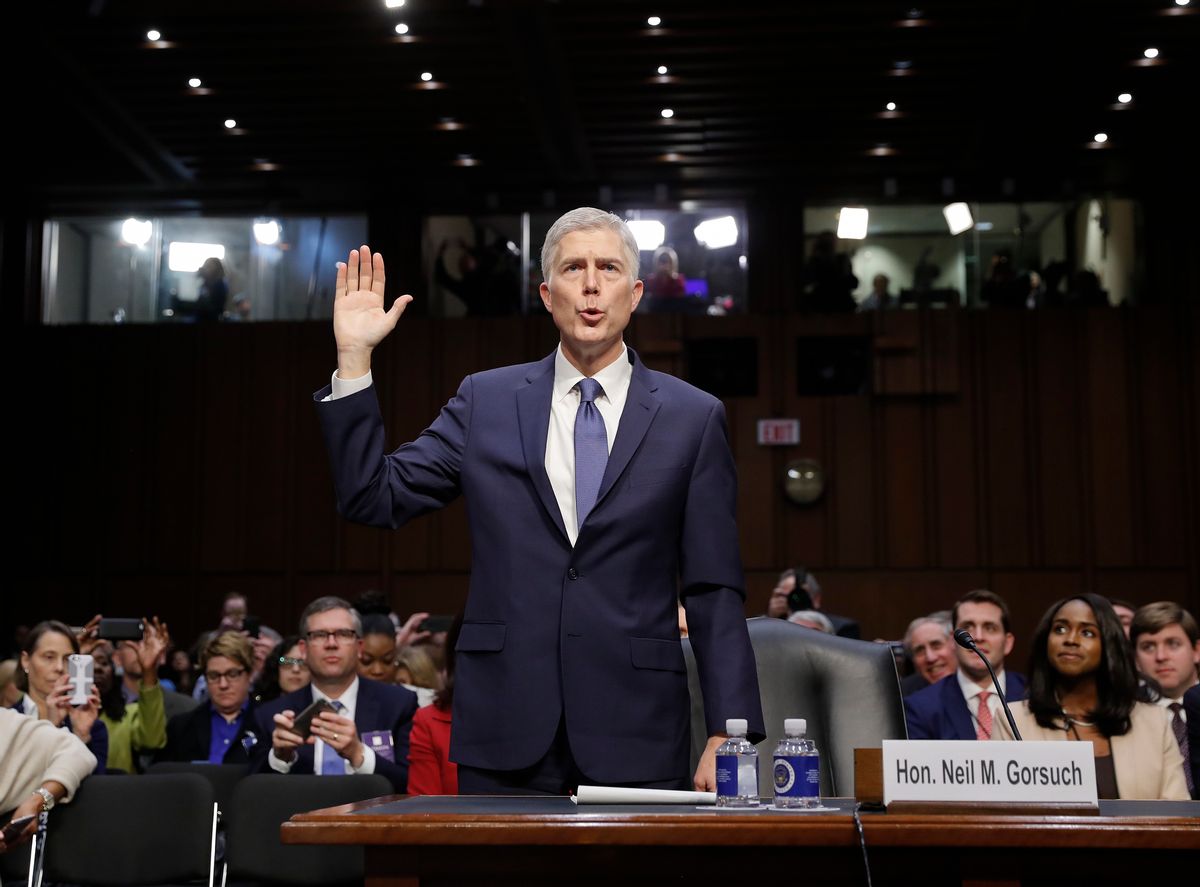 The confirmation hearing of Judge Neil Gorsuch began on Monday. After Sen. Dianne Feinstein, D-Calif., explained she was disappointed that President Obama's choice for the Supreme Court, Merrick Garland, was denied a hearing, she went on to say that the panel would determine if Gorsuch was in fact a “reasonable mainstream conservative," despite the circumstances under which he received his nomination.

But after examining his record, Feinstein was deeply troubled, and offered a blistering explanation why. She wasn't the only one. Here are nine Democrats' best attacks, and one defense of Gorsuch on the court.

Feinstein cited several cases from Gorsuch's record to demonstrate why his decisions would hurt not just Democrats, but Trump's base.

"In another case, Judge Gorsuch wrote a separate opinion, this time to challenge a long-standing legal doctrine that allows agencies to write regulations necessary to effectively implement the laws Congress passes and the president signs," Feinstein pointed out. "It's called the Chevron Doctrine."

Justice Antonin Scalia had argued in support of Chevron, which he praised for allowing "flexibility, and appropriate political participation, in the administrative process.”

"Some liken it to the action of the tyrannical kings who claim that they have sole control," Leahy added, noting the irony of the "unprecedented obstruction."

“Committee Republicans went behind closed doors and declared that they would surrender the independence of this committee to do the majority leader’s bidding and they ignored the Constitution in the process," he pointed out.

"Let me be clear: When I talk about expanding freedom, I'm not talking about freedom for corporations," Durbin opened. "'We the people' does not include corporations."

He then turned to the nominee's "originalist" viewpoint and his 2013 ruling in the Hobby Lobby case.

"Our founders never believed that corporations were endowed with certain inalienable rights, but we're seeing the Supreme Court expand [these] rights... at the expense of the voices and choices of the American people."

"You took part in that Hobby Lobby case when it was before the Tenth Circuit," Durbin noted. "As I read the case, I was struck by the extraordinary, even painful lengths the court went to [in order] to protect the religious beliefs of the corporation and its wealthy owners and how little attention was paid to the employees, to their constitutionally protected religious beliefs—their choices as individuals."

Fellow Democratic Senator Sheldon Whitehouse echoed Durbin's sentiment when he expressed fear of a "Republican 5-4 special interest spree." He rattled off more than a dozen cases to prove his point.

The Minnesota senator also spoke of the Chevron Doctrine and the difference between judges and legislators. Additionally, she called out originalism as a false promise.

"Many of the issues we face today are those that this country's founders never considered and in fact never could have considered because of all the social change and innovation that has taken place," Klobucher told Gorsuch.

"We are no longer dealing with plows, bonnets and colony debts in England, but instead driverless cars, drones and cyber-crime, and those were just the topics of the hearings I attended last week," she added.

Franken reiterated Leahy's statement about "unprecedented obstructionism" regarding Republicans' treatment of Garland and lamented the new appointment's inability to bridge the divide in America.

"Justice Scalia embraced a rigid view of our Constitution, a view blind to the equal dignity of LGBT people, and hostile to women’s reproductive rights, and a view that often refused to acknowledge the lingering animus in laws and policies that perpetuate the racial divide," Franken remarked.

Scalia's view of the document looked “very different from the one that I have sworn to support and defend," Franken added.

After spending a good deal of time reviewing Gorsuch's record, what stood out was the nominee's "tendency to go beyond the issues that need to be resolved in the case before you," Coons told Gorsuch.

"I've seen a pattern in which you file dissents, dissents from denial... concurrences or even concurrences to your own majority opinions to explore broader issues than what's necessary, to revisit long-settled precedent and to promote dramatic changes to the law," he added.

The Connecticut senator explained Gorsuch would have a "special responsibility" to defend America against a "looming constitutional crisis."

"The independence of the judiciary is more important now than ever. If you fail to be explicit and forthcoming, we have to assume you will pass the Trump litmus test," he continued.

Hirono observed that "minorities are not a priority" for Gorsuch.

"You rarely seem to rule in favor of the little guy," she told the nominee. "You consistently choose corporations and powerful interests over people; but more than that, you have gone to great lengths to disagree with your colleagues on the Tenth Circuit so that you can explain why some obscure or novel interpretation of a particular word in a statute must result in [a] finding [just] for a corporation instead of an individual who has suffered real-life harm."

After reviewing several cases, she recalled that Gorsuch once "found a difference between a floor hole and a floor opening, in order to side with the corporation trying to avoid a citation for safety issues."

"Truly [it was] the case of a distinction without a difference," she told him. "It's like arguing whether your nomination is because of a vacancy or opening on the Supreme Court."

While Katyal, a Democrat, argued in support of Gorsuch, he also opened by declaring it a "tragedy of national proportions that Merrick Garland does not sit on the court."

"We live in a unique time," the attorney said. "The current president has displayed open contempt for the courts, attacking judges who disagree with him and even questioning their legitimacy and motives."

Katyal is concurrently suing the Trump administration over its latest travel ban.

"Judges who question the president's authority have had to be placed under increased scrutiny and protection because of the reaction among some members of the public," he continued, almost a warning for Gorsuch should he be confirmed.

"Between the president's attacks on the judiciary and his controversial policies he seems intent on testing the independence and integrity of our court system," Katyal concluded.