Yes, Comey's testimony was a turning point: Consider the reaction from Trump and the GOP 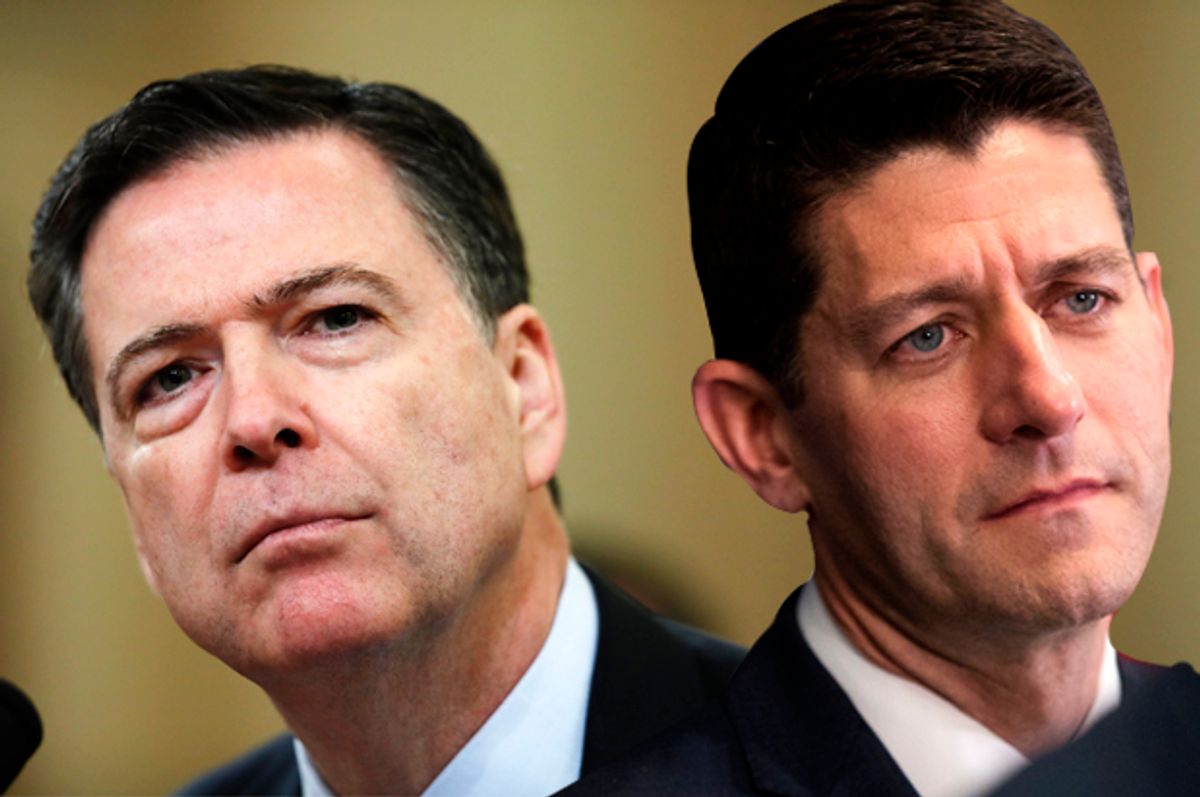 On MSNBC's Monday edition of "Hardball," Washington Post columnist David Ignatius claimed that the House Intelligence Committee hearing with FBI Director James Comey and the NSA's director, Michael Rogers, was "a turning point" in the growing "Russia" scandal. During the hearing I wouldn't have thought so.

Not that the testimony wasn't dramatic. It was. Director Comey categorically denied that there was any evidence of President Donald Trump's inane accusation that former President Barack Obama had ordered Trump Tower to be wiretapped and he confirmed there is an ongoing investigation of possible "coordination" between Trump associates and Russian government players concerning interference with the U.S. presidential election campaign.

But it's not as if there hadn't been extensive reporting about all of this already. This was no smoking gun. The hearing was significant in that it was the first time anyone in the government has publicly acknowledged the investigation, which means that the calls for a special prosecutor and a bipartisan commission take on new urgency. Despite the recusal of Attorney General Jeff Sessions, this issue is too critical, and the Trump administration is too lacking in credibility to be allowed to investigate itself. Comey may have struck an independent note in the hearing but his reputation related to the election is so tainted by his previous behavior that no matter what comes of the investigation, half the country won't believe it. And no one will trust the senior members of Sessions' Justice Department to make a fair decision about whether to prosecute.

But it wasn't the testimony itself that created the impression that something important had shifted. It was the over-the-top reaction. According to Politico, the White House was "knocked on its heels" and "scrambling to contain the fallout." Perhaps administration officials expected their buddy Comey to come through for them once again, but it appears he's only willing to take so many bullets on Donald Trump's behalf. (Admitting during the hearing that the probe had begun in July, as Comey was ostentatiously proclaiming Hillary Clinton "reckless" for what turned out to be nothing, may have made him feel slightly chagrined.)

Press secretary Sean Spicer seemed to be near panic as he desperately tried to steer attention away from the fact that the president's campaign is the subject of a counterintelligence investigation. He reminded the press about Obama officials saying they had no proof of collusion, even as Republicans on the committee seemed to imply that those same officials were the ones responsible for the leaks. In a lame attempt to distance the White House from the former national security adviser, Michael Flynn, and former campaign chairman Paul Manafort, Spicer claimed they were insignificant campaign volunteers, which doesn't pass the laugh test.

Even as he pretended that Flynn wasn't intimately involved with the campaign, Spicer gamely tried to turn reporters' attention to the fact that Flynn's name had been leaked improperly and claim that this was the "real" scandal that should be investigated (along with some nonsense about Hillary Clinton being involved with the Russians).

It was a manic performance but no more bizarre than Trump's tweets prior to the hearing, which were a tipoff that the president was feeling nervous and wanted to steer the narrative his way.

Republicans on the committee followed Trump's lead as best they could. Despite having backed the Patriot Act and mass surveillance by the National Security Agency to the hilt in the past, nearly all of them are now born-again civil libertarians, overwhelmed with concerns for the privacy rights of average citizens as long as they are named Michael Flynn.

Rep. Trey Gowdy, R-S.C., did everything but beg Comey to say he was investigating newspapers and would promise to prosecute journalists. Committee chair Rep. Devin Nunes, R-Calif., went on and on about the Clinton Foundation. It was almost as if these GOP congressmen wanted to talk about anything but the Russian hacking of the election campaign.

There's just an unwillingness [among Republicans] to hear the fundamental facts of what happened in this election. It's a desire to tell a different story, to have a narrative that this is about leaks. And sure, that's a valid point to raise and it's a serious question. But relative to the idea that a foreign government interfered in our election, tried to distort our democracy, it just doesn't compare. And I just saw so little concern about that on the part of he Republicans on that committee today. I just found it very strange.

Even for partisans trying to provide some cover for their president, it was odd. After the hearing, Mother Jones' David Corn reported that Nunes was weirdly lackadaisical about the hearing and acted as if he had never heard of some of the main players in the controversy — including Roger Stone, who has been all over the news for his admitted contact with Guccifer 2.0, one of the alleged hackers.

Maybe Republicans have other motives for trying to downplay this growing scandal aside from partisan loyalty to a president most of them barely know. As I notedon Salon a few weeks back, the Democratic National Committee and Clinton campaign chair John Podesta were not the only hacking targets. The Democratic Congressional Campaign Committee was hacked as well and the information was professionally curated and disseminated by none other than the same Guccifer 2.0. The release of that information targeted close campaigns where the information could be most effectively used against the Democrats.

The New York Times published a long exposé about this in December showing exactly how the hacks were done, but amid the Trump furor it's never been followed up. One can imagine why Republican intelligence committee members would prefer it never is. After all, the Russians apparently didn't just interfere on behalf of Donald Trump. They interfered on behalf of House Republicans. Somebody might begin to wonder what they expected in return.

If the administration and congressional Republicans want to avoid a widening net of suspicion, they should probably stop acting as if they are desperate to change the subject. It's a sure sign of a cover-up.