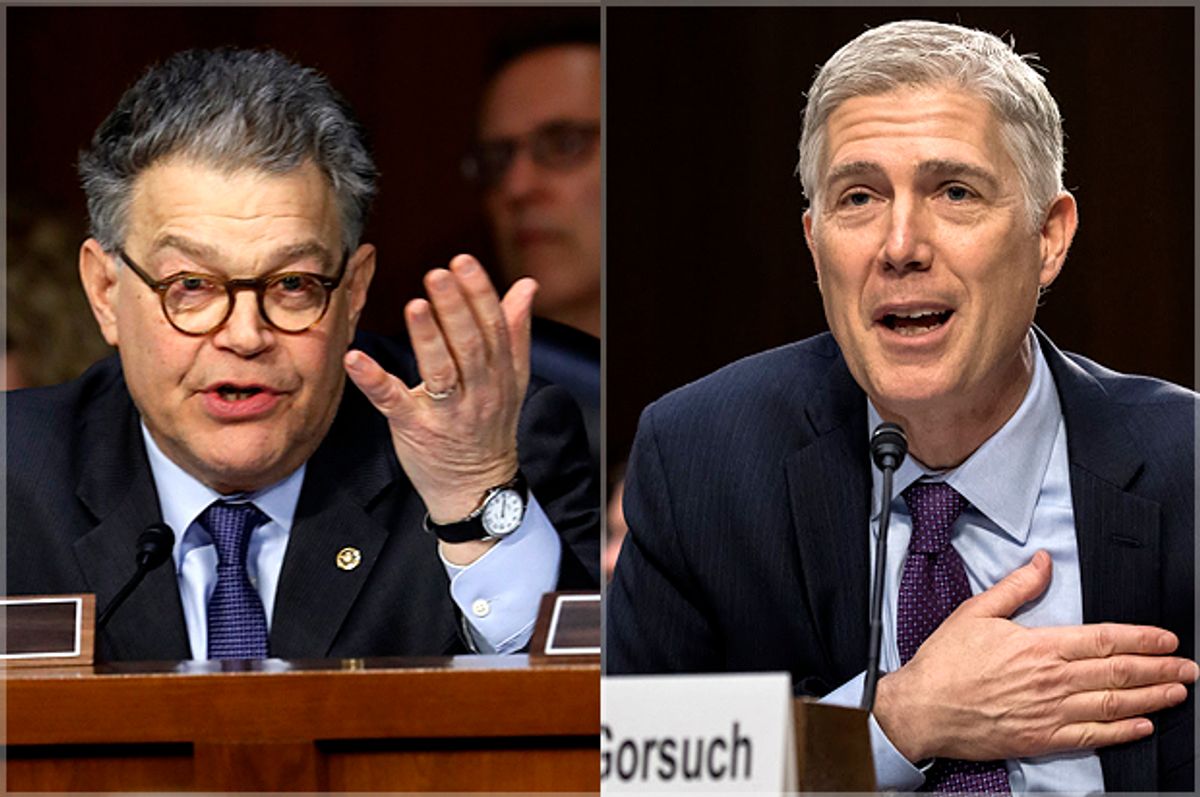 In a few short minutes of questioning Trump’s Supreme Court nominee Neil Gorsuch on Tuesday, Sen. Al Franken, D-Minn., exposed the utter absurdity of an elaborate legal fiction that conservatives have spent decades constructing. That fiction is meant to place them unreachably beyond any possible question, no matter how ludicrous, cruel or unjust their rulings might be. If the Democrats had any semblance of a coherent messaging apparatus, the Gorsuch nomination would be finished. But, of course, they don’t.

It happened so quickly, and Franken’s manner — as usual — was so understated, that it was easy to miss the significance of what happened. But the nation cannot afford to let that happen. The point Franken was making was far too critical to let it pass by unnoticed. In fact, it should be a rallying point to gather around, one that could reset the course of American jurisprudence along more sound and sober lines.

Franken’s questioning concerned the notorious “frozen trucker” case, TransAm Trucking v. Dept. of Labor. Other senators had mentioned it, but never quite in the way that Franken did. A trucker named Alphonse Maddin was fired for making a commonsense decision to save his own life — and to protect others as well. Gorsuch, alone among all the judges who ruled on the case, thought that was perfectly fine. Indeed, he felt it was the only legal conclusion he could possibly reach, a conclusion Franken called “absurd.”

A black-robed judge in the warm comfort of his chambers decides that a trucker should have meekly accepted freezing to death (alone in his truck, in midwinter, in the middle of the night), and there’s nothing anyone can do about it. That is conservative jurisprudence in a nutshell. It’s reason enough to not merely reject Neil Gorsuch but also spurn any judge who would justify himself and his rulings with similar rhetoric — like John Roberts before him — of simply, heartlessly interpreting the law the only way he could, by “calling balls and strikes.”

The acts of the matter were perfectly straightforward. As summarized by the court, “In January 2009, Maddin was transporting cargo through Illinois when the brakes on his trailer froze because of subzero temperatures. After reporting the problem to TransAm and waiting several hours for a repair truck to arrive, Maddin unhitched his truck from the trailer and drove away, leaving the trailer unattended. He was terminated for abandoning the trailer.”

Maddin successfully sued for reinstatement, the court explained, under a provision that “makes it unlawful for an employer to discharge an employee who ‘refuses to operate a vehicle because . . . the employee has a reasonable apprehension of serious injury to the employee or the public because of the vehicle’s hazardous safety or security condition.’”

Throughout the proceedings, Gorsuch was the only judge at any level who thought Maddin should have risked death or been fired. That’s what Franken honed in on, dramatizing Maddin’s plight, going through it step by step. After Maddin made a stop at about 11 p.m. on the night in question, he noticed his brakes had frozen. He called for repairs. Franken took it from there.

The dispatcher says wait, hang on there. OK, couple hours goes by, the heater is not working in his cab, it's 14 below zero, . . . 14 below zero. He calls in and says, 'My feet, I can't feel my feet. I can't feel my feet, my torso, I'm beginning not to be able to feel my torso,' and they say, 'Hang on, hang on, wait for us.' OK, now he actually falls asleep, and at 1:18 a.m., his cousin I think calls . . . and wakes him up, and his cousin says that he is slurring his speech. . . . Now, the Mayo Clinic in Minnesota says that is hypothermia, and if you fall asleep in 14-below-zero weather you can freeze to death. You can die.

He calls them back, he calls them back and his supervisor says, 'Wait. You gotta wait.' So he has a couple choices here, wait or take the trailer out, with frozen brakes, onto the interstate.

Doing that, Franken observed, would have put others’ lives at risk as well as Maddin's own, since without reliable brakes he could only drive 10 to 15 miles per hour.  “So what’s that like on an interstate?" Franken asked Gorsuch. "Someone's going 75 miles an hour, they come over a hill, and slam into that trailer."

Then there was Maddin’s hypothermia to consider. “He's a little woozy. . . . I don't think you'd want to be on the road with him, would you, Judge?” Franken asked. Gorsuch stuttered but did not reply.

“You would? Or not?” Franken pressed. “It's really easy: Yes or no, would you like to be on the road with him?”

After a bit more back and forth, Gorsuch finally admitted the obvious: “I don't think I would.”

Franken then wound up his recounting of the case. “He gets fired. And the rest of the judges all go, 'That's ridiculous; you can't fire a guy for doing that.' There were two safety issues here, . . . the possibility of freezing to death or driving with that rig in a very dangerous way.”

Gorsuch replied, in his best law-school patronizing manner, “Oh, Senator, I don't know what I would've done if I were in his shoes, and I don't blame him at all for a moment for doing what he did do. I empathize with him entirely.” Which clearly is no answer.

Responding defensively, Gorsuch said, “I thought a lot about this case.”

“And what would you have done?” Franken asked. “I'm asking you a question. Please answer the question,” Franken pressed.

“Senator, I don't know,” the finest legal mind in all of conservative America answered. “I wasn't in the man's shoes, but I understand why . . . ”

From there, Franken turned to the dissent Gorsuch wrote. As Franken described it, the issue came down to a "plain meaning" rule: “When the plain meaning of a statute is clear on its face, when its meaning is obvious, courts have no business looking beyond the meaning to the statute's purpose.” That’s what Gorsuch relied on in his ruling.

Then Franken added, “I had a career in identifying absurdity,” referring to his former roles as a "Saturday Night Live" writer and performer, and people in the room briefly burst out in laughter. “And I know it when I see it . . . and it makes me question your judgment.”

How can one not question Gorsuch’s judgment after walking through the whole case like that? How could one not go further — and question his whole philosophy and the entire system of justifying and normalizing it that conservatives have spent the last few decades constructing?

If Democrats were the least bit prepared to make a coherent overarching argument, Franken has laid down the foundation for it: What matters is people’s lives. The law was not written for lawyers but for the whole of the people. If you think the law condemns Alphonse Maddin to death or dismissal, then the law is no place for you. If you sneer at the idea of a “living Constitution,” you are cheering for the next Alphonse Maddin to die.