Billions that should go to Obamacare are missing, thanks to senators like Marco Rubio 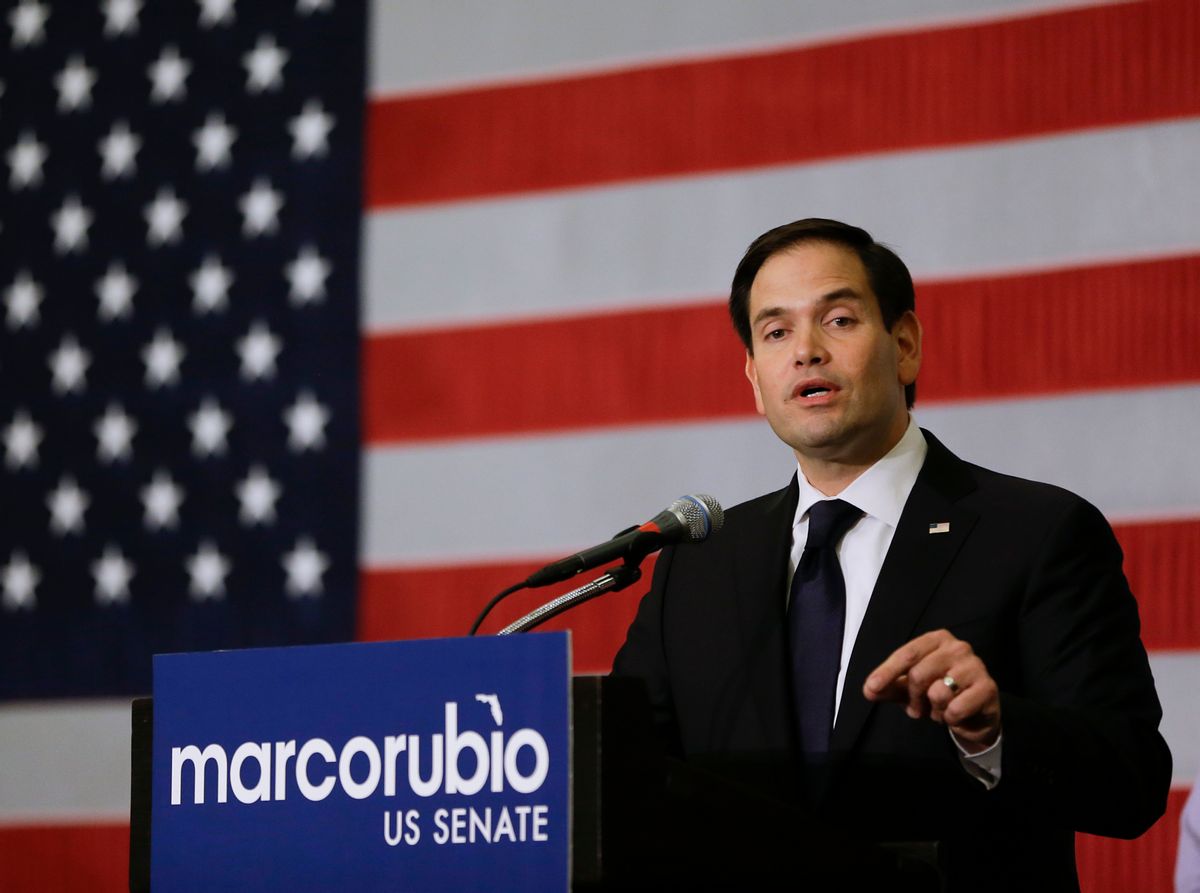 Donald Trump suggested that the Affordable Care Act (ACA or Obamacare) was a clever ruse by our first Black president and his Democratic friends to have a successful health-care system in place for his own presidency, but one that was set up to fail in the first year of the next president's term.

Trump said (on 3/10/2017) that this year "would be a disaster for Obamacare. That's the year it was meant to explode, because Obama won't be here. That's when it was supposed to be, get even worse. As bad as it is now, it'll get even worse."

While most people are rolling their eyes - why would Obama do that, particularly when everybody expected the next president to be Hillary? - there's actually a substantial grain of truth to Trump's assertion.  He has identified, however, the wrong culprit as the person who poison-pilled Obamacare for 2017.

That distinction would go to Marco Rubio (and his Republican helpers in the Senate).  Let's step back to 2015 for the entire story, which is bizarre and fascinating.

When the ACA was rolled out, telling insurance companies that they had to insure anybody who signed up, regardless of previous conditions or sickness, everybody realized that the insurance companies would probably lose money in the first decade or so, until previously-uninsured-but-sick people got into the system, got better, and things evened out.

To get the insurance companies to go along with this danger of losing money, the ACA promised to make them whole for any losses in any of the first decade's years.  At the end of each fiscal year, the insurance companies merely had to document their losses, and the government would reimburse them out of ACA funds provided for by the law.

The possibility of their losing money was referred to as the "risk corridor," and the ACA explicitly filled those risk corridors with a guarantee of making the insurance companies, at the very least, whole.

And then something happened.  As The New York Times noted on December 9, 2015, "A little-noticed health care provision slipped into a giant spending law last year has tangled up the Obama administration, sent tremors through health insurance markets and rattled confidence in the durability of President Obama’s signature health law."

Rubio and a number of other Republicans had succeeded in gutting the risk corridors.  The result was that, just in 2015, end-of-fiscal-year risk corridor payments to insurance companies that were supposed to total around $2.9 billion were only reimbursed, according to Rubio himself quoted in the Times, to the tune of around $400 million.  Rubio bragged that he'd "saved taxpayers $2.5 billion."

And, indeed, he had.  But the insurance companies were thrown into a crisis.  And, with Republicans in Congress absolutely refusing to re-fund the risk corridors, that crisis would get worse as time went on, at least over a period of a few years.

So the insurance companies did the only things they could.  In (mostly red) states with low incomes and thus poorer health, they simply pulled out of the marketplace altogether.  This has left some states with only one single insurer left.  In others, they jacked up their prices to make up their losses.

As Robert Pear in the Times noted, Rubio's "plan limiting how much the government can spend to protect insurance companies against financial losses has shown the effectiveness of quiet legislative sabotage."

To add to the political psychodrama, the first hack by Rubio  was maintained by Republicans into the 2016 budget, meaning that things got even worse in October, 2016 – the first month of the federal fiscal year when these cuts hit the worse, and, no coincidence, the month before the presidential election.

Rubio's October Surprise was extraordinarily effective.  October 2016 saw an explosion of stories in the news about how health insurance companies were either pulling out of ACA exchanges, or jacking their prices up wildly.

Time magazine wrote "8 States Where Obamacare Rates Are Rising by at Least 30%" without mentioning Rubio's role in why. Ditto for NPR's "22 Percent Hike in Obamacare Rates…" and CNN's "Obamacare Premiums Soar By 22%."  If you date-limit just to October of 2016 - the month before the election - you can find hundreds of similar articles.  It was a huge story, but somehow Little Marco's role in it all - along with his friends in the GOP - never made it into any of the stories.

Only the Times, back the previous year, had really given much coverage to the story, noting, "[B]ecause of Mr. Rubio’s efforts, the administration says it will pay only 13 percent of what insurance companies were expecting to receive this year. The payments were supposed to help insurers cope with the risks they assumed when they decided to participate in the law’s new insurance marketplaces."

Meanwhile, federal judge Thomas Wheeler of the US Court of Federal Claims, ruled recently (as reported last month by Forbes) that the feds actually have to pay back - to the tune of about $8 billion – the moneys lost by health insurance companies operationg in good faith.

But it's way too late; dozens of nonprofits started to provide health insurance through the exchanges have already gone bankrupt, and the health insurance giants are both subsuming their smaller competitors and merging like there's no tomorrow. Additionally, Wheeler's ruling is certain to be appealed – meaning it's in limbo for the moment.

So, yes, Donald Trump is right that Obamacare had been sabotaged, in a way that would virtually guarantee at least some level of crisis by 2017.  Where he's sadly, paranoiacly wrong is in attributing that sabotage to President Obama.

Democrats should have been screaming bloody murder for the past 2 years.  Maybe they can start now, every time a reporter or Republican says, "Obamacare is failing…"