The right-wing token factory: Now the grassroots right is rebelling against the mendacity of conservative media

In light of Tomi Lahren's abortion controversy, conservatives have finally noticed their own media exploits them 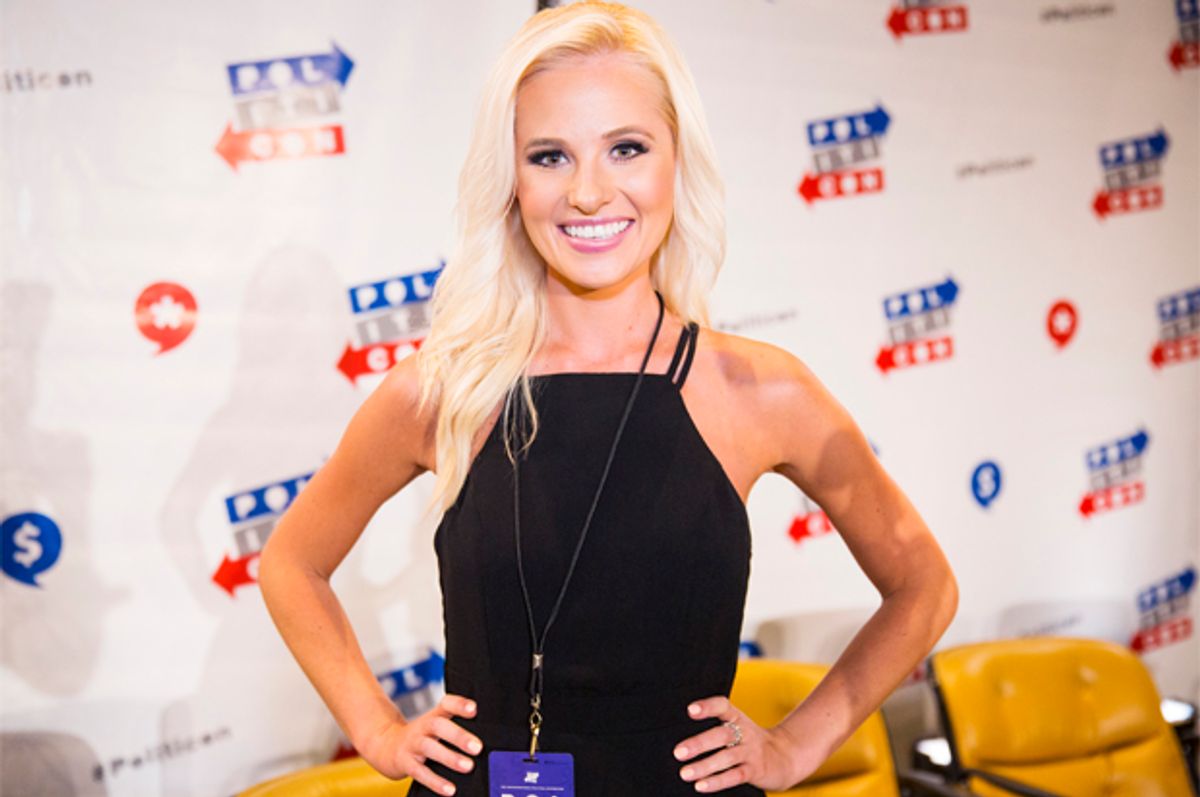 In 2016 Republicans bucked the party elites and elected Donald Trump as president. This year they're rising up against the massive media machine that exploits them for ratings, clicks and dollars.

The insurrection has been in the works since Trump first burst onto the scene in 2015, but now many grassroots conservatives are beginning to realize that the media outlets they have read, watched and listened to for decades were more interested in monetizing them than in serving them.

According to Brittany Pounders, a Texas-based blogger who operates a site called LibertyJuice, many of the people who currently target  Republicans didn’t start their careers with the intent to exploit. But they're all part of a larger media environment where stirring outrage yields big bucks and saying anything to get a rise out of liberals and leftists is all that matters.

“The need for attention, ratings, and popularity can be addictive and frightening,” she wrote in an extended essay on her site earlier this week.

“I’ve seen it destroy the integrity of people I once admired and deeply respected in conservative media circles,” she wrote, admitting that she was “as guilty as any of them.”

Fanning the flames against real and imagined misdeeds of Democrats and the left is still popular on the right but now, for the first time, regular conservatives are turning their skepticism toward the publications and broadcasters who have been pandering to them.

Many on the right are now openly mocking and ridiculing conservative media for anointing grossly unqualified people as their thought leaders, largely on the basis of their being something other than older white Christian men, the demographic mostly likely to vote Republican.

This conservative token factory has been something liberals have long noticed and ridiculed privately.

“My partner is always teasing me about why I should switch sides, so we can get rich,” one left-leaning female political commentator told me via email. “I think the audience for these tokenized pundits is mainly white male conservatives, who need to tell themselves that they aren't actually misogynist or racist,” she continued.

Another, who also wished to remain anonymous, pointed out that young liberal women trying to get booked on CNN or MSNBC have a much more difficult time than their right-leaning counterparts do at Fox News.

One of the biggest recent beneficiaries of conservative media’s seemingly insatiable desire for young women has been Tomi Lahren, a political commentator who almost overnight became a right-wing sensation thanks to her youth, telegenic looks and willingness to say almost anything.

Fresh out of college as a 22-year-old in 2014, she applied for an internship at One America News Network, a fledgling cable-news operation that has aspired to "out-Fox" Rupert Murdoch's profit center — with a hyper-patriotic eagle logo and prime-time hosts who routinely bash Republicans as insufficiently conservative.

Instead of becoming a lowly production assistant or mail opener, Lahren was immediately offered a daily program.

“My jaw dropped. I was stunned. I just wanted an internship. He gave me a show,” she told her hometown newspaper, the Rapid City Journal.

Motivated by her desire to “do whatever,” Lahren shifted from the low-key, centrist approach she favored as a panelist on a program sponsored by her alma mater, the University of Nevada, Las Vegas, to bomb-throwing rants against Muslims and former President Barack Obama.

Her efforts paid off as she was soon given a show on The Blaze, a web and cable talk channel created by radio host Glenn Beck. She kept up her incendiary approach, lobbing rants at the Black Lives Matter movement (calling it as “the new KKK”) and anti-Trump protesters (“a bunch of sore losers”) while garnering millions of shares and followers on Facebook and Twitter.

Reflecting on her newfound popularity in a July 2015 interview with Fox News, Lahren sounded downright Trumpian in describing how she had somehow given voice to unspoken conservative complaints.

“They're thinking it in their minds,” she said. “They're telling it to their friends and family. They're saying it at the dinner table. And I was just the one that came out and said it on a platform and it resonated.”

Like her intellectual predecessor Sarah Palin, Lahren is unashamed about her lack of familiarity with policy and philosophy.

“I’m going to be honest with you, I’m not a reader,” she said in an interview with the Daily Caller, a conservative site famous in its own right for its liberal usage of stories and photos of scantily clad young women.

Lahren’s meteoric rise came to an abrupt halt last weekend after she criticized pro-life conservatives in a guest appearance on ABC’s “The View.”

“I am a constitutional, you know, someone that loves the Constitution,” she said. “So I can’t sit here and be a hypocrite and say I’m for limited government but I think the government should decide what women do with their bodies.”

The sound bite sent the anti-abortion right into a frenzy. Bloggers and social-media devotees who had harbored misgivings about Lahren from the beginning were suddenly joined by thousands of grassroots conservatives angry at being called out.

“This is so mindlessly incoherent that Glenn Beck should be humiliated he has given this poser such a platform of prominence,” wrote a blogger on The Resurgent, a website for Christian conservatives.

Others linked their criticism of Lahren to what they saw as a larger problem, with one terming it “click-bait conservatism.”

“The error here is not in Lahren holding unpopular opinions, changing her mind on issues, or even in deceiving her audience,” according to blogger Danielle Butcher. “The ultimate mistake belongs to the right as a whole: our mistake is in sensationalizing our values for what is flashy, attractive, and will bring in page views.”

She continued: “When we allow people who are in politics only to build their own careers to speak for us, we delegitimize the sincerity of our cause.”

Such sentiments have become commonplace among young Washington-based conservatives and libertarians for many years. Until last month, however, almost no one had dared to speak out in public about this, even anonymously, for fear of antagonizing the career-making powers of talk radio and Fox News Channel.

Most of these activists blame Fox News for beginning the trend, particularly former CEO Roger Ailes, who was ousted from the network after being accused of being serial sexual harasser. (He is even said to have banned female hosts from wearing pants on Fox News' popular morning program.)

“The reliance on attractive, young women should be called the Fox Effect since it was perfected by Roger Ailes,” said one activist in an email to Salon. “By now, his sexism is documented, but conservative women noticed it for years.”

In conversation and email, many activists and journalists told me they fear that conservative media outlets’ careless promotion of unqualified bomb throwers is dumbing down their movement and making it difficult for women who aren’t young and glamorous to advance. Several conservative journalists seem to be of the opinion that Fox News only hires men over 50 and women under 30.

A political operative who did not wish to be identified said via email that he believed conservative media outlets have long since ceased caring about informing their audiences:

I don't hate Tomi Lahren. I hate us for constantly propping up people like her.

Our demand for pundits for years has not been to be thought provoking, to challenge our assumptions, or to give ideological coherent and critical arguments that broaden our understanding and stimulate our mind. Our demand for pundits is to reflect our emotional unsatisfaction and tell us what we want to hear, even if it has no substance at all, and to be pleasing to look at.

People who don't have a well grounded, thoughtful ideological core, but understand what to say and how to say it to play on what the audience wants to hear, which will guarantee success, but provide absolutely nothing in the way of critical thought or intellectual leadership.

While the policy wonks and activists are just beginning to go public with their critiques, the fringe activists of the “alternative right” have long denounced conservative media as shallow and manipulative.

In a January post for Return of Kings, an anti-feminist lifestyle website, writer Michael Sebastian blasted right-leaning men for allowing themselves to be exploited by young female commentators.

“For some reason, men who identify as conservative really flock to any reasonably attractive woman who says conservative things,” he wrote. “Conservative women pundits are a cottage industry that doesn’t exist on the left.”

The post is illustrated with a photo of Lahren and a suggestive image of CNN pundit S.E. Cupp appearing several years ago on the Fox News pop-culture show “Red Eye," a program that frequently seats young female pundits close to the camera in what the program's former host frequently referred to as "the leg chair."

Sebastian’s piece also references Lauren Southern, formerly of The Rebel, a video website that has been trying to cultivate an alt-right and mainstream conservative audience. Besides Southern, the site has also featured Gavin McInnes, a founder of Vice, who has since been trying to fashion himself into a bizarre combination of Howard Stern and Rush Limbaugh through supposedly satirical rants against “the goddamn motherfucking Jews” and stunts like inserting a sex toy into his rectum while on the air.

According to Sebastian, Southern represents a new type of conservative commentator, a “pundithot,” a portmanteau of pundit and "thot," an offensive slang acronym short for “that ho over there.”

Such women, according to Sebastian, lack any real qualifications to comment on public affairs, unlike older right-wing pundits like Dana Perino, Ann Coulter, and Laura Ingraham — women with actual political, legal and journalistic experience.

Instead of giving informed commentary based on their experience, Sebastian argued, these new pundits offer only sex appeal and sloganeering. He quoted a passage from an 82-page e-book Southern released in December to illustrate his point:

Sebastian’s views of conservative media outlets exploiting their audience are almost universally shared on the alt-right. Unsurprisingly, some of them see the proliferation of inexperienced young female pundits as the work of their most hated enemy: Jewish people must be responsible in some way, they say.

Commenting on a video in which Southern discusses the results of a DNA test she took (a common rite of passage for those on the alt-right), a reader of the neo-Nazi website the Daily Stormer saw her as part of a plot against the right:

My thoughts are that this is a psy-op. Look how she's dressed. She's leveraging right into what the Jews promote as the stereotype for the Alt-Right. Lonely dudes that can't get laid. Seeing as how that is the very pinnacle of Jew achievement, getting laid that is, it's obvious that they are putting her forth as an Alt-Right "leader."

This is the problem with gynocentricism. It makes a lot of thirsty beta males. It makes them easy to con and manipulate as well.

While blaming "the Jews" isn't likely to become a mainstream conservative sentiment, there's no question that many average conservatives are beginning to realize their media outlets are more interested in exploitation than in illumination.

The next installment in this series will examine the conservative token factory through the angle of race.