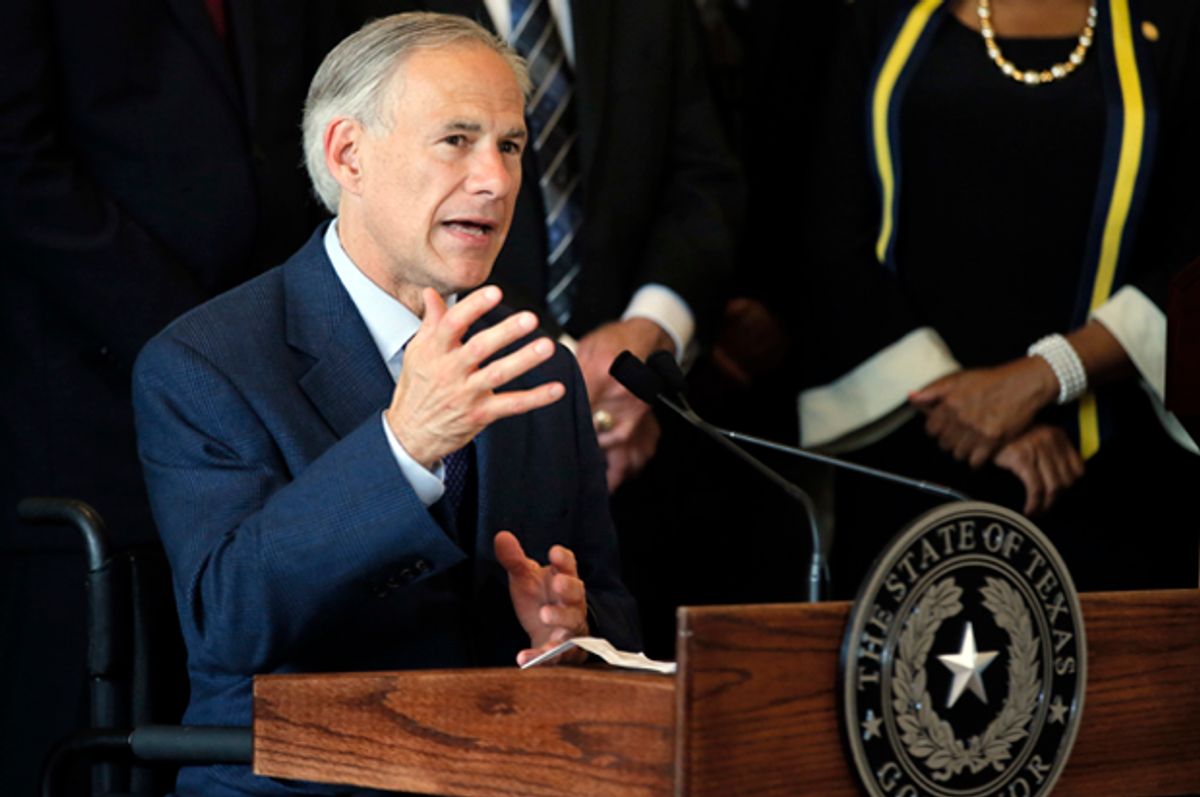 For decades now, exaltation of small government has been a conservative talking point. Conservatives would strenuously claim that it's not that they objected to federal efforts to protect civil rights or create a nationwide social safety net. It's just that state and local leaders are so much better equipped to understand the needs of their constituents — and the bigger and further away the government entity, the more out of touch it will be.

Smaller and more local government is better, conservatives insisted, and having bigger government entities usurp local decision-making power is a violation of our country's founding principles.

Well, that's how the argument used to go, anyway. It was employed by conservatives to justify everything from racial discrimination to teaching creationism in schools, while waving the local-is-better flag.

But recently, that's changed — a lot. Conservatives are starting to sour on the concept of local control, so much so that Gov. Greg Abbott of Texas, a leading figure on the Republican far right, recently gave a speech to the Texas Conservative Coalition Research Institute in which he suggested that Texas should pass "a broad-based law" that would "pre-empt local regulations."

Wait, what? Conservatives are supposed to be the small government guys. Suddenly you've got one of the most right-wing Republican governors in the country denouncing local control and arguing that Big Brother should pass broad legislation stripping basic powers from local leaders to do things like pass smoking ordinances or regulate a city's minimum wage.

“It’s not incidental that this is happening right after cities have emerged as these kind of bastions of progressive legislation, the only place where progressives are able to pass ambitious legislation," said Zachary Roth, author of "The Great Suppression: Voting Rights, Corporate Cash, and the Conservative Assault on Democracy," in a phone conversation. "It’s clearly a direct effort to block that ability.”

Cities, both big and small, have long tended to be more liberal than suburban and rural areas. But that difference has only become more profound in the past few years, creating a series of blue oases in a sea of red on the U.S. electoral map. Even in reliably conservative states, the cities often stand out as Democratic strongholds, as demonstrated by this Economist county map of the 2016 election results. Progressive activists and legislators who have felt stymied in their ability to get anything done on the state and national level (where Republicans have consolidated power), have increasingly turned to local governments to pass progressive legislation. The Fight For 15 campaign, for instance, has made huge gains in efforts to raise the minimum wage by convincing city governments to pass wage bills. Attempts to set new health and safety standards, including the passage of New York City's infamous ban on large sodas, have also met with success on the local level. City governments have also been at the forefront when it comes to the adoption of anti-discrimination ordinances and efforts to reduce greenhouse gas emissions.

One result of this trend has been that conservatives, formerly champions of the idea that government is better when it's more localized, have suddenly become fans of big government in state capitals stomping on small governments at the county or municipal level.

Perhaps the most famous example is the way that Republican state legislators in North Carolina hastily passed a law pre-empting a Charlotte ordinance that banned discrimination against LGBT people. But as Roth detailed in his book, there are dozens of examples.

Pre-emption has been used to fight minimum wage raises in many states, most notoriously in Alabama. After the city of Birmingham raised its minimum wage to $10.10 an hour, the Republican-controlled legislature quickly passed a law stripping the city of the power to set wage standards. The city then sued, claiming in part that it was racially discriminatory for an all-white Republican state delegation to prevent a city with a black majority from passing its own laws. U.S. District Judge R. David Proctor dismissed the lawsuit in February.

“Especially at the state level, where so much right-wing and Republican power is concentrated, attacks on local control and the ability of cities to govern is part of a continued strategy from the right wing to try to destroy progressive power wherever and however they can," said Gregorio Casar, a city councilman in Austin, Texas, in a phone conversation.

Casar linked the attack on local control to larger Republican assaults on democracy, such as voting restrictions and gerrymandering, that weaken the concept of one person, one vote. He noted that cities don't "count as much as our population should count in the states" because of these efforts, adding that he felt that Republicans' pre-emption of local ordinances "is just one more step in that chain of their strategy" to undermine progressive efforts to ensure that the voting public is represented fairly.

“As progressives, we don’t believe local governments should be able to decide everything for themselves," Roth hastened to note. Conservatives frequently accuse liberals of being for "big government," he said, but it's more accurate to say that liberals are agnostic on the question of local versus state or federal control. Instead, he said he believed liberals are motivated by concerns for civil rights and human rights and would work with any government they can to accomplish their goals.

“Local democracy is really the last place where democracy works relatively well, at least some of the time, where you have a chance for an ordinary group of citizens to come together and organize and make change," Roth said. "The lobbyists and special interests don’t have quite as much sway on the local levels as they do on the state and federal levels.”

Sarah Johnson, the co-director of Local Progress, a group focused on passing progressive legislation through municipalities, argued that there are unique benefits to centering in on the local level.

“We see cities as labs of policy innovation," she said by phone. She pointed out that many policies enacted on a city level, such as setting a higher minimum wage, result in success, which then leads to "local policies driving state level and national level change," as evidenced by a number of states increasing their minimum wage last year after city-based minimum wage boosts proved popular.

Johnson said that Abbott's comments represent a conservative reaction to "the broad popularity of those policies.” In other words, the problem for conservatives isn't that the city of Austin has banned indoor smoking or lets trans people use whatever bathroom works for them. It's that other people are going to see that it works, and the next thing you know, that policy is going to being pushed on a state or national level.

Everyone I spoke with for this story was alarmed by the broadness of Abbott's proposal, even though they have all for years been dealing with the problem of state pre-emption efforts by Republicans. After all, a law pre-empting cities' ability to regulate business would be incredibly broad. It wouldn't just stop progressive ordinances, such as anti-discrimination laws, but could also zero out laws favored by many conservatives, such as local liquor control regulations.

But it's clear that Abbott, at least, feels that Republicans are playing whack-a-mole with the surge of progressive ideas bubbling up in cities in the Lone Star State. In his speech, he complained about "the state having to take multiple rifle-shot approaches at overriding local regulations" and added that he would prefer to simply strip local governments of much of their regulatory power. Either way, Abbott's comments suggest that Republicans are going to double down on this pre-emption strategy — the old-fashioned conservative rhetoric valorizing "local control" be damned.

Casar, the Austin councilman, argued that progressive legislators shouldn't be cowed. There's political value in passing progressive ordinances, even if they are eventually overturned because this forces Republicans to take politically unpopular stands, he said.

"Pass increases in the minimum wage, even if they are going to be pre-empted, so at least we can have the fight," Casar said. "We can show the people that run our states for who they are to the entire state.”