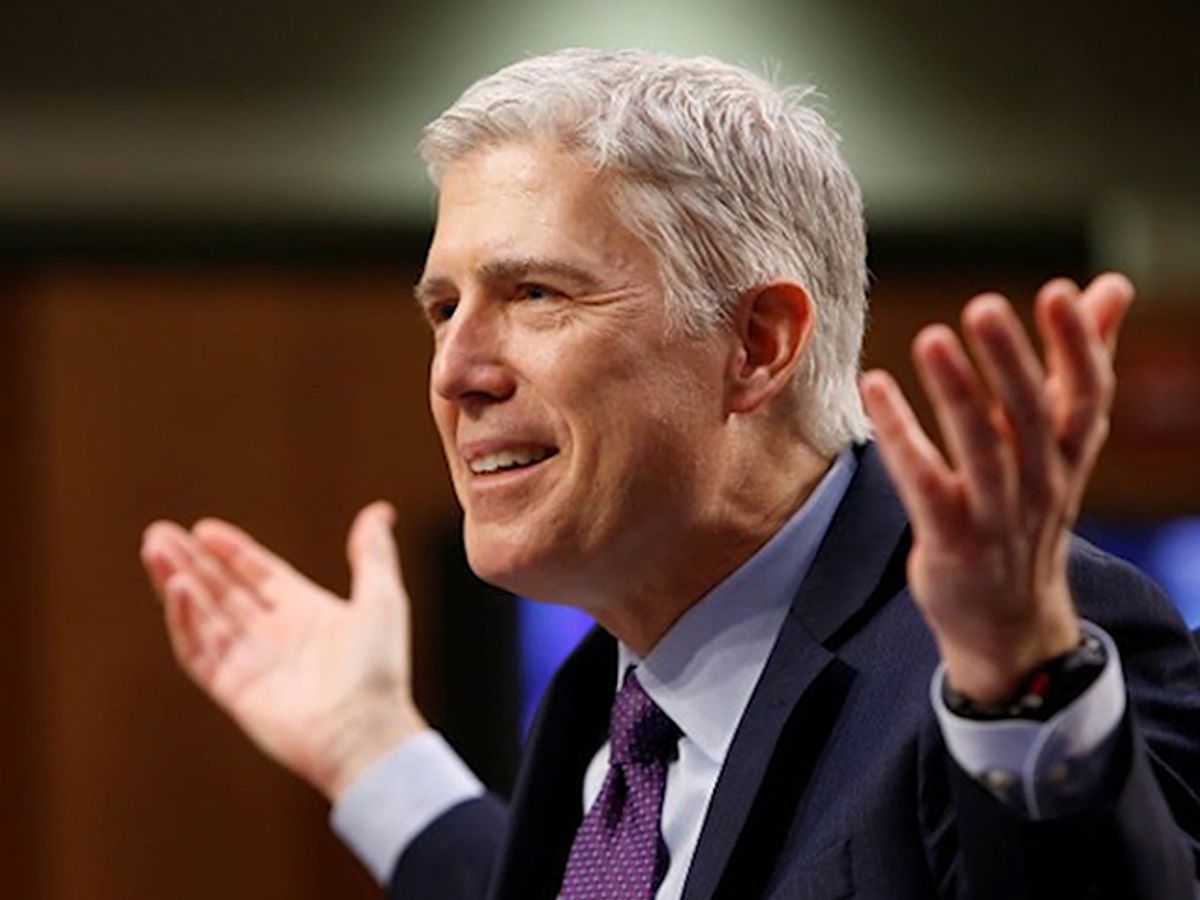 Key Senate Democrats, including at least one representing a state Donald Trump won, are finally signaling that there is absolutely nothing to be gained by playing nice with Republicans and are vowing to block Supreme Court nominee Neil Gorsuch -- even if that results in the end of the filibuster.

“If Judge Gorsuch can’t achieve 60 votes in the Senate, could any judge appointed by a Republican president be approved with 60 or more votes in the Senate?” Senate Majority Leader Mitch McConnell, R-KY, asked on Monday. By the fourth day of his Senate confirmation hearing, Trump’s pick to replace the late Justice Antonin Scalia on the Supreme Court had drawn numerous vows of opposition to his nomination from Democratic senators prepared to forever change the upper chamber.

Senate Minority Leader Charles Schumer, D-NY, announced Thursday that he would join with other Democrats in attempting to filibuster Gorsuch’s nomination -- potentially ensuring that Trump’s pick becomes the first Supreme Court justice confirmed by a simple majority of the Senate.

As the Washington Post noted, only one justice, Samuel Alito, has cleared a filibuster in the last 47 years of Supreme Court nominations. The Senate’s “cloture” rule requires a supermajority of 60 votes to overcome such a filibuster.

“If this nominee cannot earn 60 votes — a bar met by each of President Obama’s nominees, and George Bush’s last two nominees — the answer isn’t to change the rules. It’s to change the nominee,” Schumer

Republicans are eager to confirm Gorsuch before an Easter recess next month, but in order to do so without changing Senate rules they will need at least eight Democratic votes.

Democrats wanted Gorsuch to at least hint at his views on specific cases and issues during his three days testifying before the Senate Judiciary Committee, but several complained that the conservative jurists straight out of central casting refused to show his hand.

While Schumer’s opposition was widely expected, his announcement came minutes after Democratic Sen. Bob Casey, a Pennsylvania Democrat running for re-election in a state Trump won, told reporters he, too, would vote against Gorsuch.

“With regard to President Trump’s nominee to the Supreme Court, Judge Neil Gorsuch, I have spent hours studying his decisions as a member of the U.S. Court of Appeals for the 10th Circuit,” Casey wrote in a letter posted to Medium. He went on to explain that he has “serious concerns about Judge Gorsuch’s rigid and restrictive judicial philosophy, manifest in a number of opinions he has written on the 10th Circuit.”

Casey had been one of a dozen Democratic targets Republicans had hoped to woo. He iis up for reelection next year in a state that Trump turned red for the first time in nearly three decades. Another Democratic Senator facing reelection in 2018, Delaware's Tom Carper, also announced on Thursday that he would filibuster Gorsuch, the Post reported. As did Vermont Sen. Bernie Sanders, who ran in the Democratic presidential primary last year.

"I will not support Republican efforts to change the rules to choke off debate and ram the nomination through the Senate," Sanders said Thursday.

In his statement against Gorsuch’s nomination on Thursday, Oregon Democratic Senator Ron Wyden pointed to the judge’s 2009 book, The Future of Assisted Suicide and Euthanasia, in which he opposed assisted suicide by repeatedly talking of “the innate value of human life” and declaring that “the intentional taking of human life by private persons is always wrong.”

Wyden said Gorsuch had “shown no respect of the individual to make decisions about their own lives and families without interference from the state.” The Democrat noted that voters in his state have supported assisted suicide twice.

During his confirmation hearings, Democrats repeatedly noted that Gorsuch appears to believe that while conservatives jurists practice a respectable review of the law in constitutional cases, liberals are nakedly political in their interpretation of the law.

Several pointed out that in his 2005 article for the conservative journal National Review, written before he took the bench, Gorsuch maintained, “American liberals have become addicted to the courtroom, relying on judge[s] and lawyers, rather than elected leaders and the ballot box, as the primary means of effecting their social agenda on everything from gay marriage to assisted suicide to the use of vouchers for private-school education.”

Aside from the modern history of conservatives using the courts to to dismantle the Affordable Care Act, undue campaign finance reform, and eradicate the essence of the Voting Rights Act, Democrats reminded Gorsuch during his hearing that he was only sitting before the Judiciary Committee as a result of conservative politics.

After all, it was McConnell, and Iowa Republican Sen. Chuck Grassley, the chair of the Judiciary Committee, who refused to fulfill the constitutional mandate that they “advise and consent” on former President Barack Obama’s nominee, following candidate Trump’s instruction to “delay, delay, delay.” It was Republican Sens. Ted Cruz, John McCain, and Richard Burr who pledged to hold Scalia’s vacant seat open for four years in the event of a Hillary Clinton win last October.

Progressive Senate Democrats, like Massachusetts Elizabeth Warren and Ohio’s Sherrod Brown, had already announced their opposition to Gorsuch before his hearings began this week. Brown represents another state won by Trump in the election.

While in the long run, the Democrats have no power to block Gorsuch, many may still be unwilling to officially destroy the filibuster, which is in effect already gone. By choosing such dramatic moves to block Gorsuch, these key Senate Democrats at least show they will stand with base voters who call for resistance over Senate decorum that legitimizes a stolen seat and broken process.