"Grabbing hands, grab all they can": Depeche Mode's "Spirit" is a reminder of how political the band can be 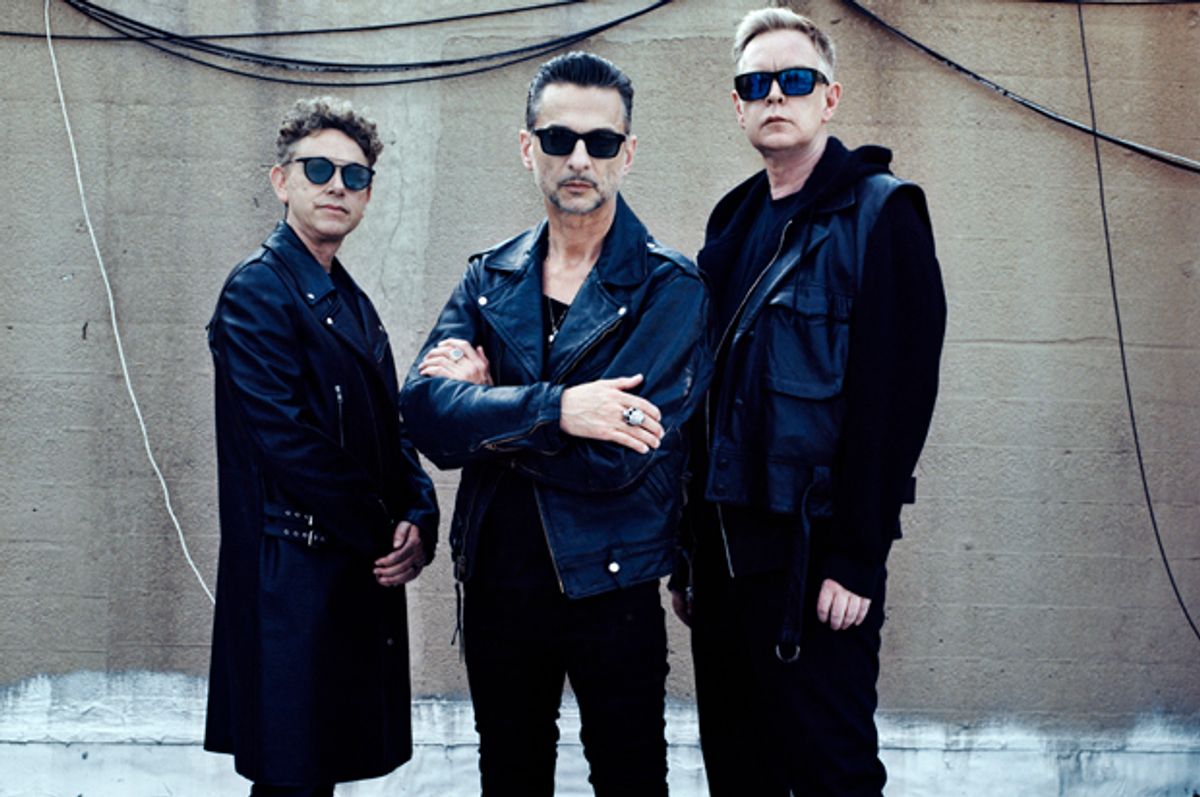 The exchange was a reminder that Depeche Mode was actually tangling with politics more than it had in recent years. The Martin Gore-penned "Where's the Revolution," the first single from "Spirit," encourages people to engage in mutiny against oppression. Although not explicitly liberal, a sampling of chorus lyrics ("They manipulate and threaten/ With terror as a weapon," "Who's making your decisions?/ You or your religion/ Your government, your countries/ You patriotic junkies") points to a left-leaning perspective.

As many reviews have noted, the rest of "Spirit" also has an overt political bent. However, it's more precise to say that the album features commentary on (and is a reaction to) the societal and cultural elements that led to 2017's global political upheaval.

"Going Backwards" juxtaposes technological progress with decaying morals and devolution to "a caveman mentality," while "Worst Crime" calls for people to own up to corrupt behavior: "We are all charged with treason/ There is no one left to hiss." The electro-dirge "Poorman" is specific about its stance: "Corporations get the breaks/ Keeping almost everything they make/ Tell us just how long it's going to take/ For it to trickle down." And "Scum" pulls no punches in how it portrays a faceless person presumably abusing their position: "Hey scum, hey scum/ What are you going to do when karma comes?"

Speaking to Rolling Stone about the album, Gahan didn't necessarily reveal inspiration specifics. "We called the album 'Spirit,' because it's like, 'Where's the spirit gone?' or 'Where's the spirit in humanity?'" he said. Earlier in the article, he admitted he "wouldn't call this a political album, because I don't listen to music in a political way. But it's definitely about humanity, and our place in that."

One could argue that the latter idea — someone deeply considering where they fit in the world among their fellow citizens — is inherently political. However, Gahan has a good reason for demurring on specifics. In a recent Billboard interview, he discussed not just the Spencer incident, but also how his band's music has been misunderstood. "I think over the years there’s been a number of times when things of ours have been misinterpreted — either our imagery, or something where people are not quite reading between the lines.

"If anything, there’s a way more sort of socialist — working class, if you like — industrial-sounding aesthetic to what we do," Gahan continues. "That’s where we come from. We come from the council estates of Essex, which is a really s----y place, just 30 minutes east of London, where they stuck everybody when London was getting too overpopulated in the late '60s."

From a sonic perspective, Depeche Mode's early music captures the cloistered existence Gahan describes. The fogged-up-window synths of 1981's debut, "Speak and Spell," give way to sharply modern keyboards on 1982's "A Broken Frame." That record's programming conjures textures that are simultaneously drab and chirpy: dripping faucets, a dull church service or a melodramatic sitcom theme.

On subsequent records, Depeche Mode employs clanking production and scraping sound effects, as well as midnight-hued keyboards and generous slathers of reverb, to convey increasingly hollowed-out angst. The sounds of industry remain an aesthetic influence on a song such as "Black Celebration," which resembles a bustling, belching factory, and on the "electronic metal" the band embraced as the '80s progressed. But although modern technology and different production techniques changed the band's sound — giving it a sleeker, dystopian and minimalist vibe — Depeche Mode has never lost its utilitarian, greyscale synthpop essence.

What's more intriguing is how the thematic bent of "Spirit" revisits and amplifies aspects of the band's past. Notable parallels can be made to 1983's "Construction Time Again," the record containing the greed-demonizing "Everything Counts." That LP's cover image features a chiseled, real-life ex-Royal Marine hoisting a sledgehammer. From an iconography perspective, it was a striking statement — even if its intent had many layers.

In a documentary about the record, Martyn Atkins, a longtime Depeche Mode-associated designer who worked on "Construction Time Again," said "The kind of political look of the things was more fashion than a specific statement. If you look back, you'll see a lot of those kind of elements creeping in, of both fascist and communistic kind of iconography. It was exciting looking stuff. And I think that nobody had really plundered it to market an everyday product like a record."

Yet in an interview with NME journalist X. Moore, the members of Depeche Mode were firm about their political awakening and how the concept of "The Worker" dominated the record.

"The general tendency of the album is very socialized and The Worker sums it up -- it’s the obvious image to get across socialism," said keyboardist Alan Wilder. "It’s like, the first thing you think seeing the cover is that the hammer is smashing down the mountain, but not to destroy. Because he’s a worker, it’s to rebuild it, it’s positive. That was the overall idea of the album, to be positive -- that’s why it’s construction time, not destruction time."

Later in the article, Gore was more explicit about the ways his lyrics dealt with greed and money, and the disproportionate way wealth is distributed. "The thing is, the people in power don’t care about someone with a low wage, they only care about their own power. But I think people should care about other people, y’know, 'cause from the moment we’re born we’re put into competition with everybody else."

Going forward, that kind of direct commentary emanated from Depeche Mode's catalog only occasionally, although these moments resonated. "People Are People" somewhat clumsily (but sincerely) addresses bigotry: "It's obvious you hate me, though I've done nothing wrong/ I've never even met you, so what could I have done?" The murky "New Dress" criticizes tabloid frippery ("Princess Di is wearing a new dress") that is focused on to the detriment of more important matters: "If you change points of view/ You may change a vote/ And when you change a vote/ You may change the world." And uproar over the sexual overtones of "Master and Servant" obscured the song's coded societal commentary: "Domination's the name of the game/ In bed or in life/ They're both just the same/ Except in one you're fulfilled."

Still, it's not like the group was an apolitical entity the rest of the time. Mat Smith's excellent essay about the band's political nature points out how '80s Depeche Mode reverberated "in places like East Germany or Russia that were divided and separate from the West by ideology. Depeche Mode’s music spoke to a generation of young people that felt betrayed by Communism, capturing the hearts and minds of a youth who heard something in this music that we’ll probably never fully appreciate unless we were living through it with them." And Gore's lyrics very much politicize personal matters: His vignettes about spiritual struggles, romantic turmoil and internal battles with the self are charged with divisive emotions.

Depeche Mode might have been seen as comparatively lighter, because '80s synthpop tended to deal with surprisingly weighty issues. Industry's "State of the Nation" condemns needless (and deadly) wars, as does Frankie Goes to Hollywood's "Two Tribes." The Human League's monstrous "Dare" LP features "Seconds," a song about the assassination of John F. Kennedy from the perspective of the shooter. Bronski Beat's sociopolitical statement "Smalltown Boy" is about someone leaving home after being bullied about his sexuality. And nuclear war or nuclear apocalypse were popular thematic jumping-off points; Ultravox's "Dancing with Tears in My Eyes," OMD's "Enola Gay" and even Modern English's "I Melt With You" all fit into this category.

These topics might seem quaint or retrograde now, but as Depeche Mode cautions on "Spirit," political backsliding is lurking around every corner. Speaking about new song "The Worst Crime" to NPR, Gahan says "The way we divide each other — you know, racial divides. [It's] kind of calling out to really question that, to kind of check yourself — me included, everyone else included.

"Like, where do you really stand, what are the choices you're really making? Do you really love thy neighbor, and are you willing to accept the differences? We just seem to be slipping backwards."