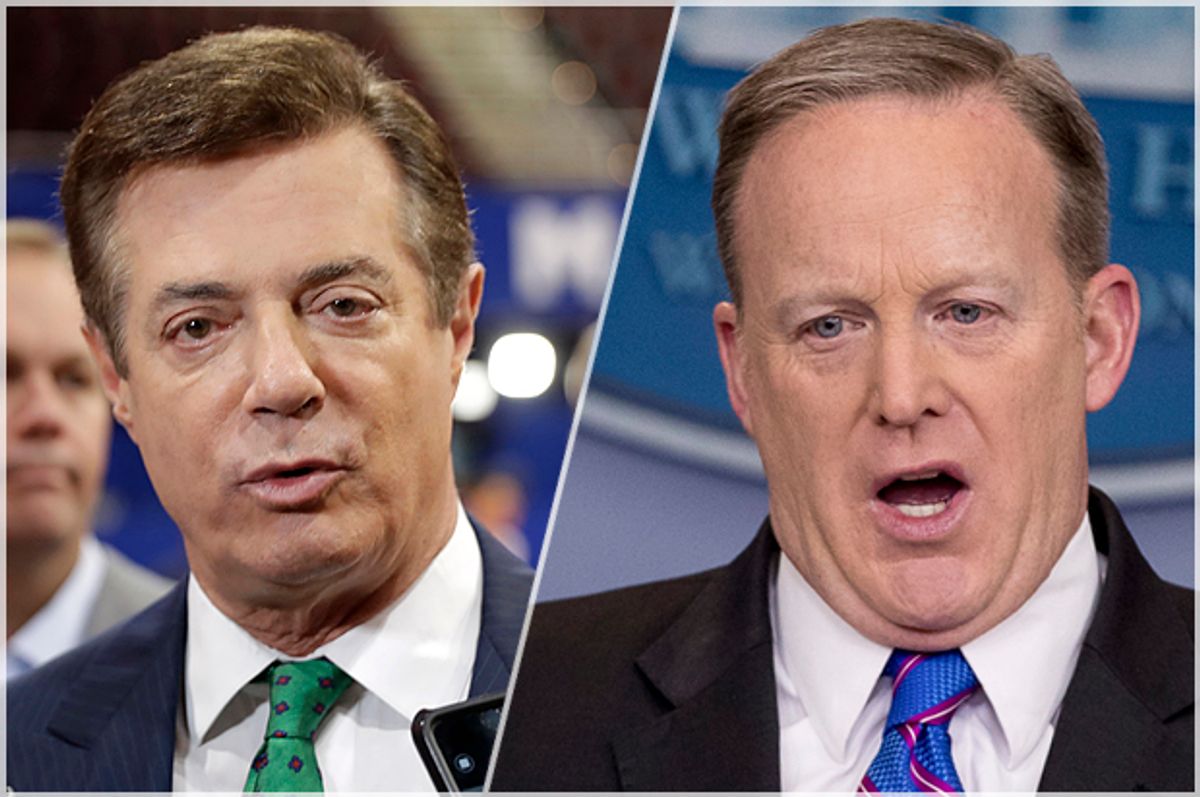 Sean Spicer clearly thinks we’re all stupid. As the man charged with leading the Trump White House’s communications shop, Spicer is in the unenviable position of having to respond to reports that former Trump campaign chair Paul Manafort is both wildly corrupt and financially linked to a Russian billionaire with close ties to Vladimir Putin. There aren’t really any good responses to that particular PR fiasco, but some are worse than others.

Spicer has opted to insult the intelligence of everyone within range of his voice by arguing that Manafort, who led the Trump campaign for several months, was barely even involved with the effort to get Trump elected. On Monday Spicer argued that Manafort “played a very limited role for a very limited amount of time” in the campaign. On Thursday Spicer described Manafort as “a gentleman who was employed by someone for five months,” likening the former campaign chief to someone “who sat next to [Trump] on the plane” or “who [Trump] grew up with in grade school.”

This is all ridiculous, especially given that Spicer is making this case in front of reporters who covered the Trump campaign and are well aware of the critical role Manafort played.

But let’s assume, as Spicer does, that we are all, in fact, fantastically ignorant people who have no knowledge of the 2016 campaign and its key players. That means we have to educate ourselves. To do so, let's turn to someone who would know better than most just how the Trump campaign worked: former Republican National Committee communications director Sean Spicer.

As the top comms guy at the RNC, Spicer was closely involved in Trump campaign operations. So it makes sense that when Corey Lewandowski was fired as Trump’s campaign manager in late June, Reuters turned to Spicer for comment on the new campaign leadership structure:

Manafort will take over as campaign manager, said Carl Paladino, co-chairman of the campaign's operations in New York state.

“In charge” is an admittedly nebulous term, though. It could mean anything! Thankfully, Spicer cleared things up a couple of days later when he went on Fox News Radio to heap praise on Manafort for how he had rearranged the campaign’s organizational structure to better prepare for the general election:

Brian Kilmeade: How many people have been hired, Steve?

Sean Spicer: I don’t — definitely a good chunk in the last 24 hours.

Spicer: But again, it’s not just the number of people. It’s the flow charts, if you will. I think there is a really strong organizational structure that Paul Manafort is leading to make sure that everyone knows their job and everyone knows who they’re reporting to. And you’ve seen, I think, the results of that in the last 24 to 48 hours, where the results speak for themselves. Everybody’s sort of noticed some of the initial changes in how this campaign was being run, and, I think, all for the better.

A month later as the Democratic National Convention was starting up, Spicer appeared alongside Manafort at a Republican National Committee press event to explain what the Trump campaign's response to the Democratic nomination would look like — you know, the sort of thing that senior campaign officials do during an election season.

Anyway, all of this leads us to the conclusion that Sean Spicer is an absurd liar. We already knew that, of course, but pointing that out never gets old.