This is the life cycle of a Donald Trump lie 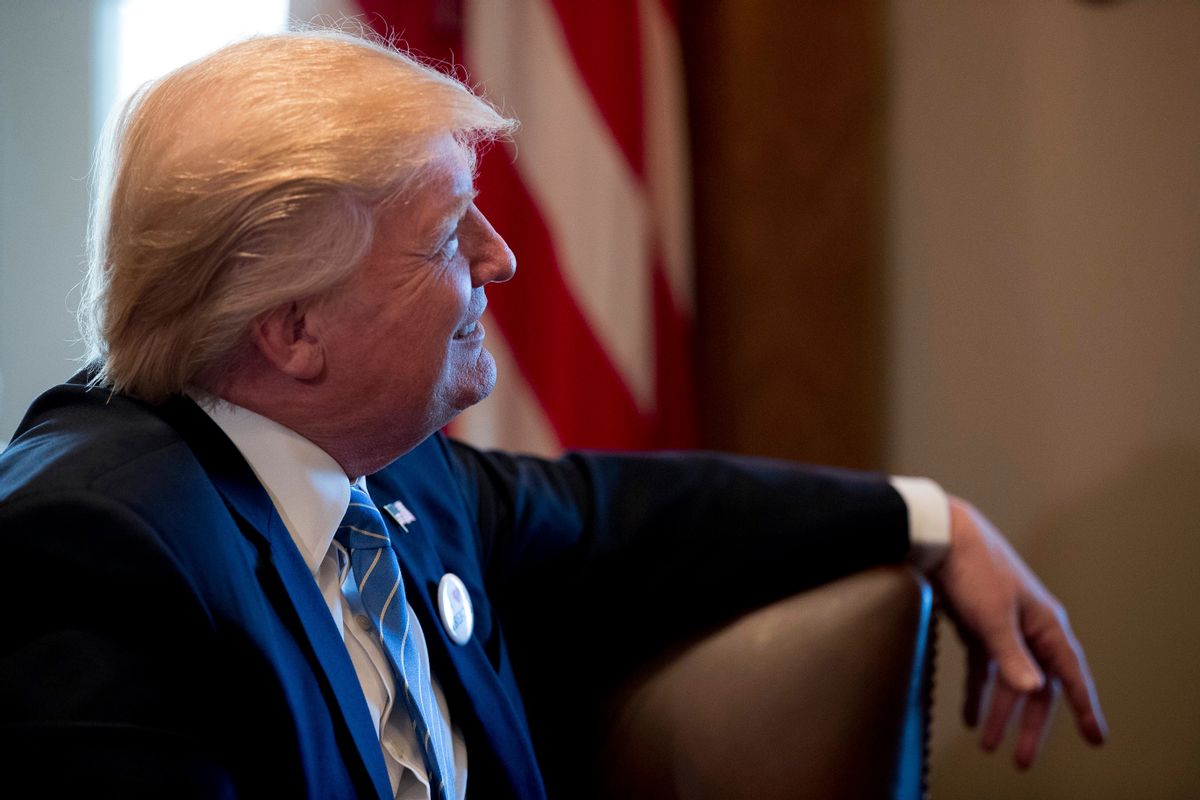 On March 4, President Donald Trump declared himself the victim of a scandal on the level of the the Watergate crimes that brought down President Richard Nixon. In an early-morning tweetstorm apparently triggered by reading a Breitbart article, the president claimed that President Barack Obama “had my ‘wires tapped’ in Trump Tower” in an October effort to influence the election.

Over the past three weeks, Obama’s spokesperson, his director of national intelligence, the directors of the National Security Agency and FBI, Trump’s Justice Department, and the bipartisan leaders of the Houseand Senate intelligence committees have all said that this isn’t true, and the claims have been widely ridiculedby the press.

But Wednesday, after a bizarre press conference in which House intelligence Chairman Devin Nunes (R-CA) said that he had just learned that “on numerous occasions the Intelligence Community incidentally collected information about U.S. citizens involved in the Trump transition” — an effort he described as “legal” — Trump’s conservative media allies rushed to declare that the president had been right all along.

“President Trump vindicated on his wiretap claim,” claimed Sean Hannity, adding, “We’ve been telling you for two weeks, and the rest of the alt-left-propaganda-destroy-Trump media with egg on its face once again.” At Breitbart.com, the headline was “Nunes ‘Unmasking’ Report Vindicates Trump Claims on Surveillance.” Rush Limbaugh declared that Nunes’ remark “is what Trump meant” and that “Trump’s record remains 100 percent; the things he says generally have happened or do happen.”

On its face, these claims make no sense.

As The Washington Post’s Aaron Blake noted last week, it is deceptive to suggest that this sort of “incidental collection” is evidence of Trump’s claims because “Trump claimed the surveillance was targeted at him — and directed by Obama. Incidental collection is, by definition, incidental -- i.e. unintentional. The wiretap wouldn't be of Trump Tower; it would be of whomever was contacting Trump Tower.”

(Trump associates’ communications could also have been legally collected as part of the FBI’s investigation into “the nature of any links between individuals associated with the Trump campaign and the Russian government, and whether there was any coordination between the campaign and Russia’s efforts.”)

“It's not difficult,” Blake warned, “to see evidence of incidental collection eventually emerging and the Trump team saying, ‘See! We told you they were surveilling us!’”

And indeed, in an interview with Time magazine conducted after the Nunes press conference and published yesterday, the president declares that Nunes’ assertion “means I’m right.”

When the reporter noted that the incidental collection Nunes references “would not be wiretapping of you,” and thus would not support Trump’s initial statement, the president responded, “Who knows what it is? You know, why, because somebody says incidental.”

Hours later, Trump lashed out at NBC and ABC over their “totally biased and fake news reports of the so-called Russia story.” And Spicer spent much of the press briefing later that day attacking the press for its coverage of the story.

A pattern is emerging: Trump and his team are doing everything they can to create an atmosphere of uncertainty in the which people will trust Trump over all other sources. And so they tear down the media, and the Congressional Budget Office, and federal government employees.

But this only works if Trump is perceived as honest. And so Trump never admits that he was wrong, never acknowledges if his story has changed, claims that it is the people who say that he’s pushing falsehoods who are the real liars, and kicks up as much dust as possible around his falsehoods.

This turns every lie he tells into a polarized argument, with him and his media allies on one side and his perceived enemies on the other. The pro-Trump team rallies his supporters to believe him over the facts. Those in the middle, who don’t follow news closely, are confused; the story they end up hearing is that there is a dispute over what the president said, not that he is a liar.

Trump’s handling of the Time interview is instructive. The president was talking to the magazine for a cover story whose premise was that he lies all the time.  And yet, throughout the interview, Trump never gave an inch to the reporter’s suggestions that he sometimes told untruths. Instead, he claimed that he had been right all along, either because his statements had been accurate or because he had only been citing someone else’s reporting. The interview ends up reading as a debate between one person who is insisting, with increased alarm, that the other person acknowledge that the sky is blue, while the second person blithely claims that, in fact, it is green.

During the Time interview, the president also helpfully pointed to a few of his past falsehoods that fit the cycle.

“Thousands and thousands” of Americans celebrated 9/11

1) At a November 21, 2015, rally, Trump claimed that “I watched when the World Trade Center came tumbling down. And I watched in Jersey City, New Jersey, where thousands and thousands of people were cheering as that building was coming down.”

3) Right-wing media figures who support Trump assembled scraps of evidence from news reports that they claim “vindicate Trump’s claim of 9/11 Muslim celebrations.” One of these stories was a Washington Post report written by Serge Kovaleski stating that authorities “questioned a number of people who were allegedly seen celebrating the attacks.” No proof of the “thousands” Trump claimed ever materializes.

4) Trump followed his allies and cited Kovaleski’s story on Twitter to support his initial claim, saying, “I want an apology! Many people have tweeted that I am right!” Trump was trying to move the goal posts, suggesting that his statement should be considered accurate if there was credible evidence of ANY people celebrating. Kovaleski issued a statement saying that he did not recall “anyone saying that thousands or even hundreds of people were celebrating.”

5) Trump mocked Kovaleski’s muscular disorder in a subsequent speech in which he claimed he had “shut a lot of people up” by citing the reporter’s article and that Kovaleski had then been compelled to lie about what he had seen. Trump has since falsely claimed that he did not know who Kovaleski was at the time and that Trump was not mocking his disability on the stump.

Asked about the claim by Time magazine more than a year later, Trump responded, “Well if you look at the reporter, he wrote the story in the Washington Post.”

“You look at what’s happening last night in Sweden”

1) During a February 18 rally, Trump “referred to several countries that have taken in a disproportionate number of refugees and that have recently been the target of attacks. ‘We’ve got to keep our country safe. You look at what’s happening in Germany. You look at what’s happening last night in Sweden. Sweden, who would believe this?’ Trump went on to refer to Paris, Nice, France, and Brussels, European cities where attacks have occurred in the past two years.” The president was apparently referencing a segment that aired on Fox News the previous night.

2) The president was widely ridiculed by Swedish politicians who pointed out that there had been no terror attack in the country that night.

4) Conservative media outlets respond to the riots by stating that Trump was right about Sweden, even though that event happened after Trump’s comments. Trump told Time that the “massive riot in Sweden” was “exactly what I was talking about” and claimed he was “right about that.”

5) During the Time interview, Trump lists his comments about Sweden as one of the instances where he has been right and the media has been wrong to attack him.