Trump budget director to Americans worried about losing health benefits: "You can . . . change the state that you live in" 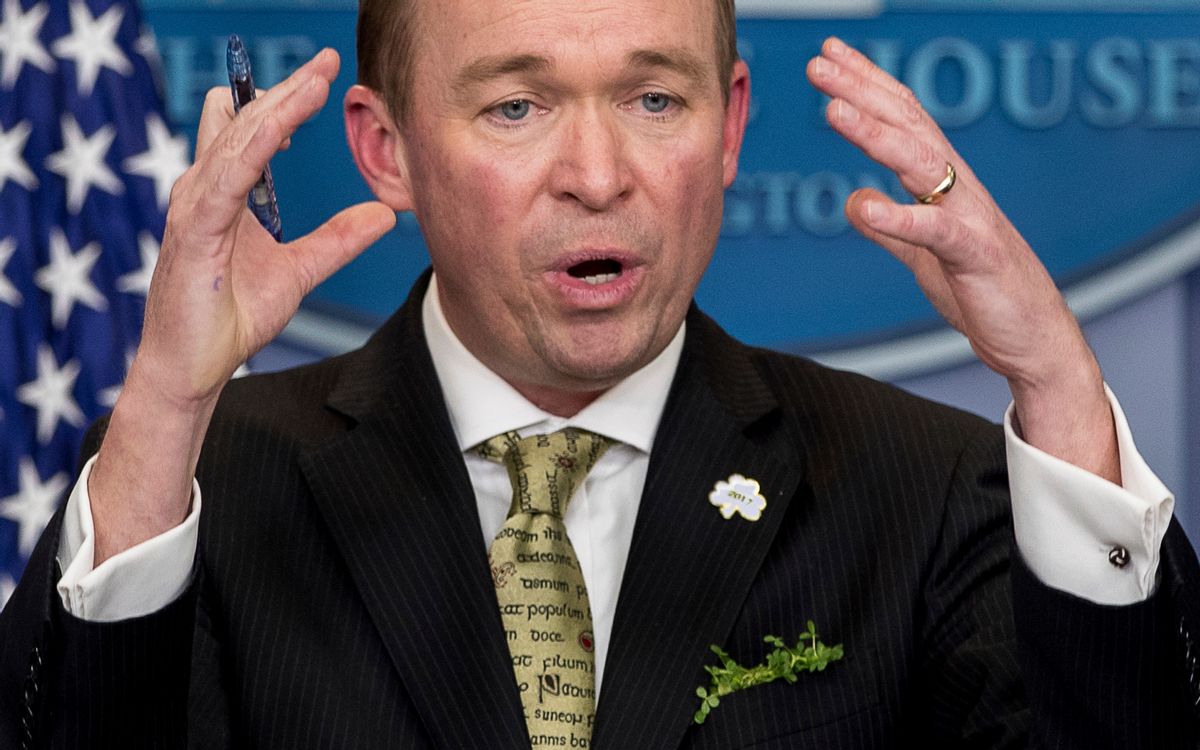 The White House's budget director, Mick Mulvaney, has a solution to Americans who think they should have insurance that includes essential health benefits: Just change the state apparatus!

“If you live in a state that wants to mandate maternity coverage for everybody, including 60-year-old women, that’s fine,” Mulvaney told CBS News on Friday morning, Talking Points Memo reported. He argued that control over minimum coverage for insurance plans belongs at the state level and complained about the national standard imposed by Obamacare. “They could try to change their own state legislatures and their state laws.”

Mulvaney told those who are worried that House Republicans' health care bill, backed by the White House, will cut insurance coverage for things like maternity care and mental health to simply lobby their state governments to mandate insurers provide coverage for some of the most basic medical needs.

"What we're doing is taking away the federal control of these systems," said Mulvaney, who voted as a member of the House of Representatives to shut down the federal government over Planned Parenthood funding in 2014.

When asked by co-host Alex Wagner about states that would allow insurers to strip their coverage of prescription drugs, emergency room visits and preventative services under Trumpcare, Mulvaney offered a flippant suggestion for concerned Americans.

“Why do we look to the federal government to try and fix our local problems?” asked Mulvaney, arguing that Americans "can try to change their own state legislatures and their state laws.”

He also suggested to citizens that if they find insurers are not offering adequate coverage in their state, "then you can figure out a way to change the state you live in."

In an effort to woo reluctant conservatives in the House, Republicans revised their proposed American Health Care Act  to do away with Obamacare's essential health benefits stipulation. These required insurance companies to cover 10 essential benefits like maternity care and mental health services.

While the elimination of essential benefits might have made Trumpcare more appealing to some hard-line conservatives of the House Freedom Caucus, the House Appropriations Committee's Republican chairman came out against the bill Friday morning, citing a negative impact on health care coverage.

"The denial of essential health benefits in the individual market raise serious coverage and cost issues," Rodney Frelinghuysen wrote in a statement on Friday.

Hal Lawrence, CEO of the American Congress of Obstetricians and Gynecologists, told USA Today that eliminating the essential benefits requirements is a “horrible idea that takes away women’s access to preventive and maternity care.”

Added Lawerence: “What [members of Congress] will do is increase illness, pregnancy complications, cancer and death.”