Trumpcare dies again: For the second day in a row, GOP pulls the plug on Obamacare replacement 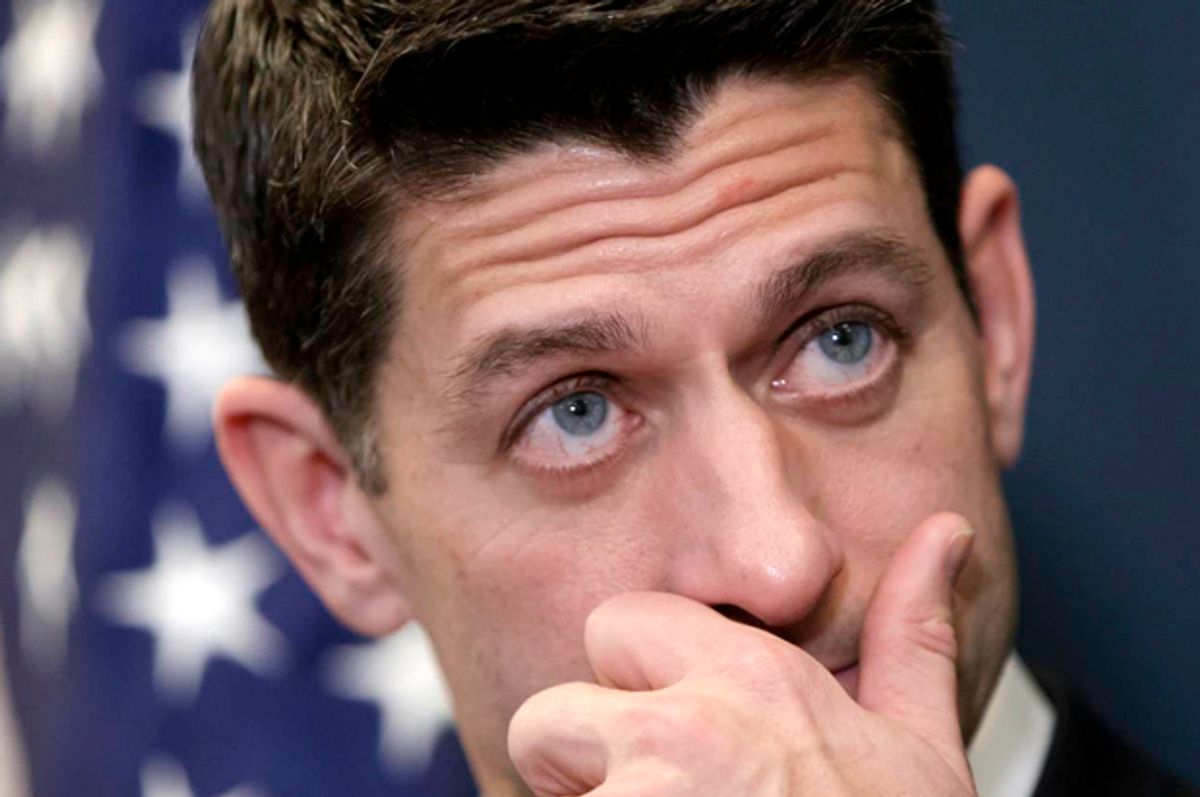 Just two and a half weeks after it was introduced, the American Health Care Act has now twice come within hours of facing a floor vote in the House of Representatives, only to see it canceled at the last moment. The bill underwent a series of strip-mall cosmetic surgeries to make it more attractive to hardline conservatives in Congress, and President Donald Trump expended what political heft he had in commanding Republicans to vote for the misbegotten bill. It wasn’t nearly enough: By most unofficial counts, anywhere from 30 to 50 GOP members were planning to vote no, and with Democrats united in opposition, anything above 22 signaled certain doom.

The Republicans’ first major legislative push of their “unified” government is a flailing disaster that seems to be trapped in purgatory. May it rot there forever.

Let’s break down who deserves the most blame for this fiasco, in descending order.

Paul Ryan: Oh, such tragedy to see the legendary wonk brought so low. The House speaker is the primary author of this debacle — it was his terrible bill, and it was his decision to try and jam it through on an insanely abbreviated timeline. Furthermore, Ryan let himself get railroaded by Trump into pushing for a second attempt at a vote on legislation that almost nobody wants to become law.

Some of this mess might have been averted had the speaker actually devoted the necessary time to unwinding the insane political and policy complexities that come with health care legislation. Instead, Ryan tried to implement his agenda through speed and secrecy. He and his lieutenants hammered out the American Health Care Act in secret, literally keeping copies of it behind locked doors. The policy they churned out didn’t actually fix any of the lingering problems in the health care system — a fact confirmed by a Congressional Budget Office report that Ryan ridiculously tried to spin as positive.

Ryan tried to make the bill more politically palatable by catering to the hardliners in his caucus — more cuts to Medicaid and fewer regulations for insurers — and made changes on the fly with hardly enough time to rewrite the bill before the next revision came along. Leading up to today’s vote, there were members who still hadn’t read the final version of the bill, which was released just last night. Ryan wanted this breakneck pace, and these aborted votes were his reward.

Donald Trump: President Trump’s problem is that he’s impatient, incurious and consumed with what he perceives as “winning.” Throughout this entire process, Trump has shown little interest in or appetite for the details of the major health reform legislation he intended to sign into law. All Trump knew was what he’d been saying on the campaign trail: Obamacare is “bad” and he was going to replace it with something better.

The American Health Care Act was “something,” so Trump backed it, even though it broke pretty much every health care promise he made on the campaign trail. He was unwilling (or unable) to make any substantive case for its passage.

Instead, the case Trump made focused on putting political pressure on reluctant Republicans in the House, threatening them with retribution in their home districts if they didn’t fall in line behind him. Such threats don’t carry a ton of weight, given that the president's approval rating is below 40 percent, and FBI Director James Comey has now confirmed that contacts between the Trump campaign and the Russian government are now under investigation.

When Trump actually did go out and pitch the AHCA to voters, he treated it as a thankless chore to slog through before the GOP could move on to more exciting legislative priorities. Meanwhile, the news coverage surrounding the law focused on the Congressional Budget Office’s estimates of massive coverage losses and higher deductibles under the AHCA. For Trump, passing the ACHA was not about improving health care for anyone; it was about netting himself a political victory.

The House Freedom Caucus: The wry take on all this is that Obamacare was “saved” by the hardline right-wingers of the House Freedom Caucus, who of course despised President Obama and everything he said or did. A more straightforward way of putting it is that the social safety net remains stitched together because the American Health Care Act did not promise to inflict nearly enough violence upon it to satisfy the Freedom Caucus.

I’m sure the zealots will happily take credit for this bill’s failure, but that stands as a reminder that the Republican policy vision is, as always, guided by the most extreme elements within the party. The AHCA might well have passed had a few more concessions been made to the hardliners, and this awful, rushed piece of legislation would have come one major step closer to becoming law.

What happens now is anyone’s guess, but both the president and the speaker are left politically compromised by this self-made disaster. Trump found out — and everyone else saw — that he doesn’t have enough political clout to bend Congress to his will, even when it is controlled by his own party. Ryan failed on his own to pull together enough votes for this must-pass agenda item, and then he let Trump bigfoot him into scheduling a second vote that he didn’t want to hold, and almost certainly knew he couldn't win.

This likely won’t be the last bite of the apple for the Republicans when it comes to health care. They might try a series of smaller, more manageable bills that don’t have so many moving parts. They’ll also likely busy themselves with undermining the Affordable Care Act from within, in an effort to create political pressure on Democrats to “fix” the problems that arise. At least for now, Americans have reason to be happy: This terrible legislation looks to be dead.