A perfect storm of hate: These Republican bills in Arkansas would make it ‘illegal to be transgender’ 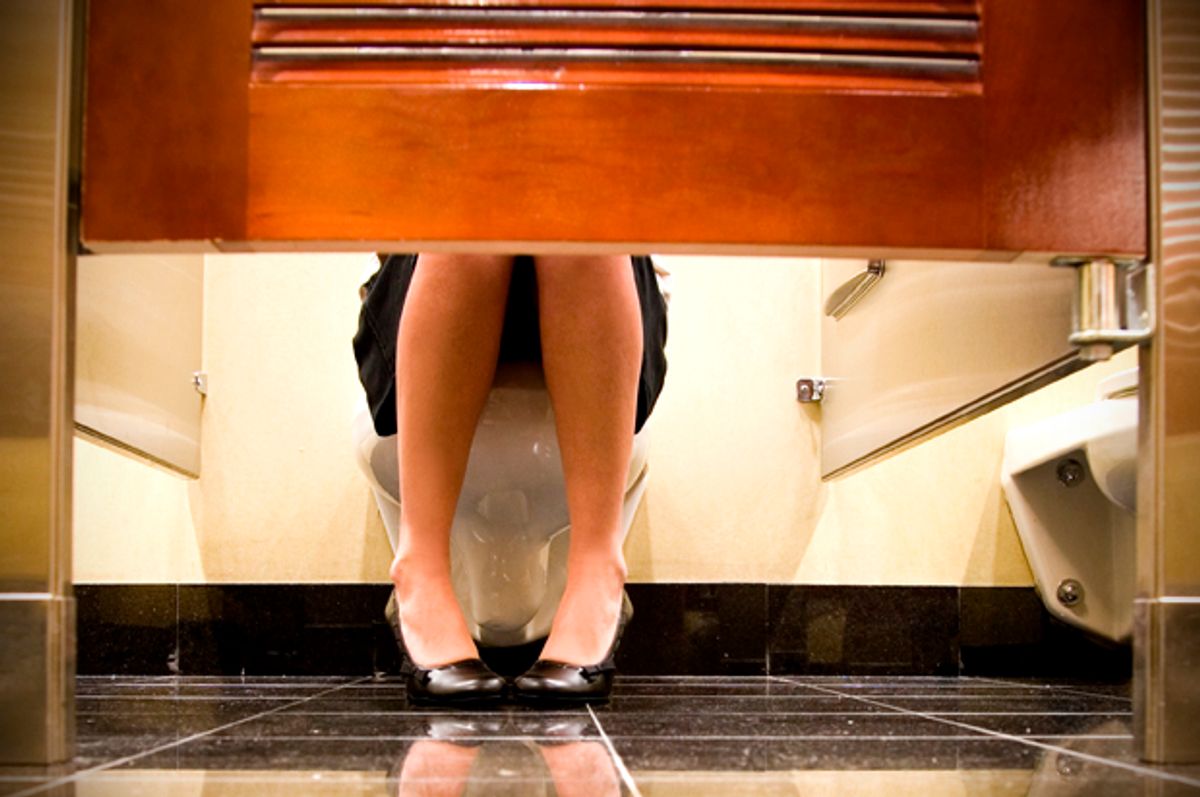 The clock is ticking on a trio of bills that LGBT advocates in Arkansas claim would make it effectively “illegal to be transgender” in the state.

Republicans have until March 31, which marks the end of the 2017 legislative session, to pass House Bill 1986, Senate Bill 774 and House Bill 1894 before these proposals are tabled for the year. SB 774, known as the Arkansas Physical Privacy and Safety Act, is similar to North Carolina’s controversial HB 2. It forces trans people in the state to use public restrooms that correspond to the gender listed on their birth certificate when entering government buildings and other entities owned by the state. That legislation is currently awaiting a vote by the Senate Judiciary Committee.

Claiming it “sets a baseline for privacy,” the bill’s author, Sen. Linda Collins-Smith, defended SB 774 on Monday. “The bill truly is about all people, all dignity — making sure all areas are safe and feel comfortable,” she told press at the state’s capitol building.

That bill has been opposed by the Little Rock Convention and Visitors Bureau, which has warned that legalizing discrimination could trigger massive economic backlash in the state. After passing HB 2 exactly a year ago, North Carolina has lost an estimated $600 million in revenue following boycotts from PayPal and Deutsche Bank, which relocated scheduled expansions that cost the state hundreds of jobs. The National Basketball Association pulled the All-Star Game from Charlotte, which would have been held in the city in February, and the league has claimed that the state will forfeit its hosting privileges until HB 2 is repealed.

The bathroom bill, though, is just the tip of the iceberg. Further legislation being pushed by conservative lawmakers threatens to target trans individuals by making it extraordinarily difficult to be in public at all.

Often referred to as the “bathroom bill lite,” HB 1986 actually goes further than the Physical Privacy and Safety Act by allowing individuals to bring charges against trans people for “indecent exposure.” Such actions are already a crime under Arkansas law, but HB 1986 would expand existing law on the subject. The bill defines indecent exposure as an instance in which an individual “knowingly exposes his or her sex organs to a person of the opposite biological sex: (A) In a public place or in public view; or (B) Under circumstances in which the person could reasonably believe the conduct is likely to cause affront or alarm.”

Zachary Miller, who sits on the board of the Arkansas Transgender Equality Coalition, claimed that this law could be applied in ways that are extremely harmful for trans people.

“That bill would have a huge impact on the entire trans community,” Miller said. “If a transgender man has top surgery, his chest could be viewed as a sexual organ, according to the the language used on the bill. Anywhere his chest is in public view — like at a public pool or going to a spa — he could be in violation of the law and be arrested.”

Under HB 1986, trans people could face a hefty fine, as well as jail time, if another individual feels that the alleged assailant has exposed themselves in a way that would cause “affront or alarm.” If convicted of indecent exposure, transgender folks in the state would be subjected to a $2,500 penalty, in addition to a maximum sentence of a year in prison. Multiple charges dramatically escalate the severity of punishment. Should a trans person be found guilty of the crime four or five times in a 10-year span, that carries a Class D felony charge of six years behind bars, as well as a $10,000 fine. After one’s fifth conviction, the sentence is 10 years.

To make matters worse, Rae Nelson of the Marsha P. Johnson Institute pointed out that there are a number of ways in which transgender people could be singled out under the law.

For instance, Nelson recently went on a road trip to North Carolina with some trans friends. The group stopped off at a public restroom, and a member of her party, who is a transgender man, wanted to use the men’s facilities. But there was a major problem: Nelson explained that the “gap between the stalls was too wide.” Given that a survey from UCLA’s The Williams Institute showed that 60 percent of trans people have experienced harassment in public restrooms, it was a risk he was unwilling to take.

“If there was even a chance of a person being able to catch a glimpse of him in there, he didn’t want to take it,” said Nelson, who sits on the board of the trans advocacy organization.

But if the Arkansas law is passed, getting a “glimpse” of a transgender person using the bathroom — especially if it’s in a facility they are legally not allowed to be in — would constitute a crime. HB 1986 was already given approval by the state’s House of Representatives, who pushed it through by a 65-3 vote, and it awaits a vote in the Senate.

A third anti-trans bill has been reintroduced after being voted down by the House Committee on Public Health, Welfare, and Labor earlier this month. HB 1894 would bar transgender people from amending their birth certificates to match their gender identity. “If I decided I don't want to be white, well, do I get to pick my race?” asked Representative Mickey Gates, who authored the legislation, warning during legislative debate that the bill is necessary to prevent a slippery slope of trans individuals identifying in any way they so choose, even as a different ethnicity or a different age. “What happens if you have a guy and he’s 24 years old and he decides he wants to be a 14-year-old guy so that he can have sex with a 14-year-old girl? Will that not be rape?”

“Just because you have the right to identify doesn't mean the state is obligated to recognize the way you feel,”Gates added.

But amending your birth certificate is already extremely difficult under existing state law. In order to do so, current Arkansas guidelines state that a transgender person must have a court order from a judge, as well as a letter from their physician stating that the individual has completed surgical transition. Gender confirmation surgery is an expensive, time-consuming process that many will not be able to afford. Transgender people, especially trans women of color, face the highest poverty rates of any group in the U.S.

Should this bill become the law of the land, it would be next to impossible for any trans person in Arkansas to escape the aforementioned cycle of legal harassment and criminalization. Gwen Fry, president of the Arkansas Transgender Equality Coalition, argued that these bills are an attempt to “legislate the trans community out of existence.”

“We’ve seen a real change in the climate here,” Fry said. “It’s a very tenuous place to be in and highly stressful for individuals in the trans community. They’re trying to make it illegal to be transgender.”

Miller particularly noted the impact that these pieces of legislation — which he said are the first of their kind ever introduced in Arkansas — would have on transgender youth in the state. HB 1984, the HB 2-style bathroom bill, specifically calls out facility use in state-owned buildings. That would force trans students in public schools to use restrooms and locker rooms that do not correspond with their gender identity. Transgender individuals experience a disproportionately high rate of suicide attempts, especially among young people, and this would only make the trauma they already face even worse.

“One in six trans youth have been sexually assaulted in schools that do not have trans-friendly bathroom policies,” Miller claimed. “One in three have been physically assaulted.”

Arkansas isn’t the only state to consider legislation targeting trans rights. The Texas House of Representatives is set to hear arguments on SB 6 after the bathroom bill, which has been opposed by companies like Google, Microsoft, Amazon and Hilton, passed the state’s Senate by a vote of 20 to 10. Although Lieutenant Governor Dan Patrick is an enthusiastic supporter of the bill, House Speaker Joe Straus has warned it would be bad for the state’s economy. The Texas Association of Business estimated the state could lose up to $8.5 billion as a result.

Miller felt that striking down Arkansas’ anti-trans bills was imperative in a year where at least eight transgender women have already been murdered. The LGBT advocate, who frequently visits the legislature to help inform lawmakers on the issues, is disheartened that these sobering numbers have yet to change the hearts and minds of the bills’ proponents.

“They would rather see you die than go to a damn restroom,” Miller claimed.