A tale of two countries: Chris Hayes' "A Colony in a Nation" describes the conditions for a second American revolution 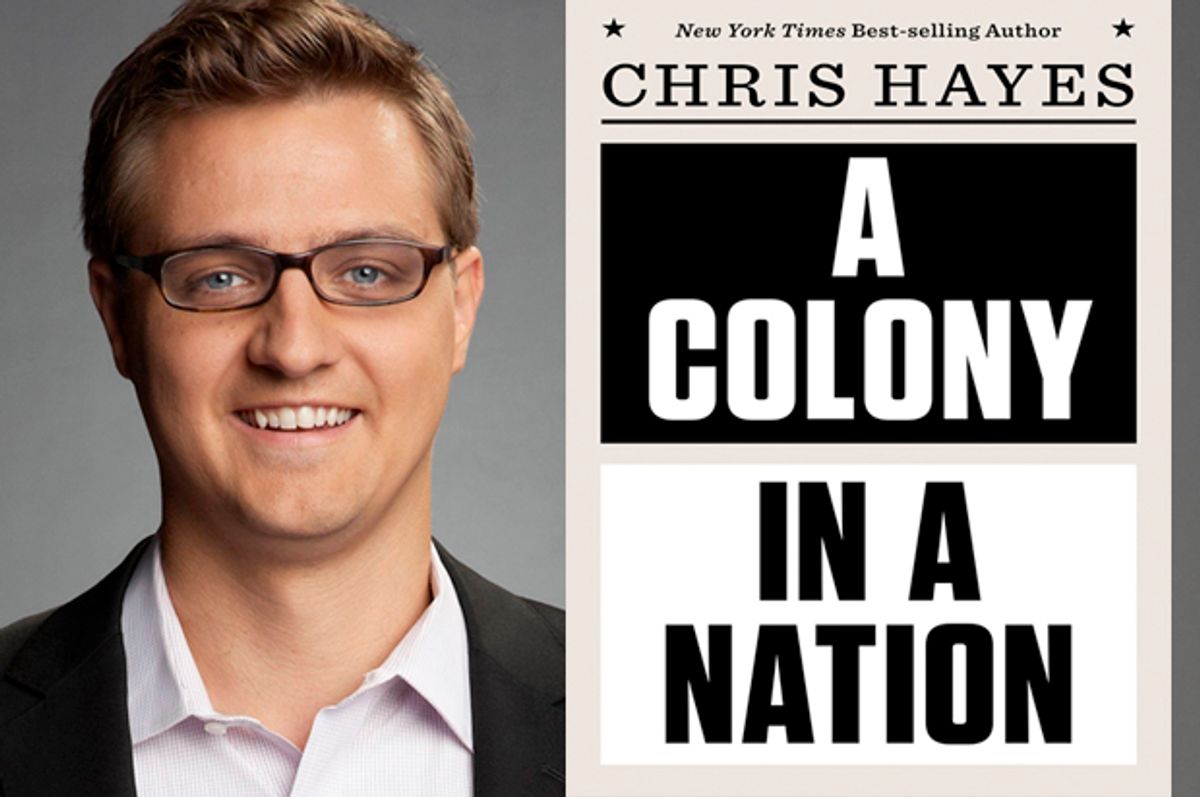 MSNBC host Chris Hayes’ second book, "A Colony in a Nation," is a dark book for a dark time. Written during Barack Obama’s presidency and with only a single, passing mention of Donald Trump, one might expect the book to call from those already-halcyon days of yore with a certain quaint hope and optimism. The troubles of yesterday have been supplanted by worse ones, right? I wondered if Hayes' ideas would arrive already obsolete. The answer is no: With perhaps the first significant theorization on race of the Trump era, Hayes delivers a book as dark and dire as the moment and even more vital than when initially conceived.

"A Colony in a Nation" is something of a continuation of the project begun with his first book, "Twilight of the Elites." His two books might be considered revolutionary texts of a sort — not in the sense that they call for revolution, but that they describe the conditions for it. Hayes has a particular talent for examining rather unflinchingly our national ills and synthesizing them into grand phenomena that threaten the weakening stability of power in America. With "A Colony in a Nation," he follows his first book, which describes the increasing illegitimacy of power in late capitalist America, with an examination of the powerless at the other end, a population he carefully analogizes to America’s revolutionary founders of the late 18th century. In a nearly 30-page passage, Hayes skillfully parallels the circumstances of the contemporary American underclass to the original American colonists roiling toward revolution in the 1760s and early '70s. The passage, perhaps the book’s most significant, joins the likes of John Adams, Constitutional scholar Amil Akhar, Frantz Fanon, the mid-century African theorist of anti-colonial violence, and others in conversation to define the untenability and combustibility of dual regimes: the Colony and the Nation.

The book’s analytical project revives and updates the theory of “internal colonialism” that grew to dominate the black radical perception of power and sovereignty vis-à-vis the wider, whiter nation during the 1960s and '70s. Relying on formulations of Black Power theorists and practitioners like Stokely Carmichael and forebear W.E.B. Dubois (Martin Luther King, Jr., too, referred to the “ghetto” as a “domestic colony” in his radical last year), Hayes posits “a territory that isn’t actually free” in 2017, “a place controlled from outside rather than within.” These subjugated territories, which Hayes terms the “Colony,” reside within the “Nation,” forming “two distinct regimes.”

Hayes relies a good deal on his personal experience growing up in the turbulent Bronx, much of it the Colony, and his professional experience in reporting from the various sites of tumult and insurrection in the wake of police killings over the past several years. He describes the spontaneous rebellions in places like Ferguson and Baltimore — revolts of the Colony — and the militarized police deployed to put them down. With generous empathy, Hayes offers the perspective, gained from his reporting, of both Colony denizen and the police, the armed, frontline administrators of the Nation. Hayes is careful to remind the reader of the humanity of each participant and the fears we all have, rational and justified or not. Both the Colony and the Nation are armed to the hilt and scared.

But Hayes digs below the bombast and spectacle so characteristic of the television coverage he and his colleagues are bound to on cable news to examine the penal, fiscal and bureaucratic administration of the Colony, which has emerged to concretize the Colony into a distinct zone of alternate governance and which serves to further rigidify the internal quasi-national borders formed originally by white fear and white flight. Hayes details what amounts to an oppressive, confiscatory tax authority in the form of police in places like Ferguson, where neoliberal-era budget shortfalls demand police ensnare citizens in maddening traps of compounding fines and fees. This source of revenue, collected disproportionately from its black and poor citizens, now forms an essential part of the Ferguson municipal budget, a central character of the Colony brought to light in the wake of Ferguson’s unrest. The Colony, much like the subjugated territories of Europe’s colonial heyday, has its own distinct revenue generation. It is, writes Hayes, a “maintenance of order through something that looks — in many places — more like the centuries-old model of colonial administration.”

Unlike traditional colonial models of domination and plunder, however, Hayes emphasizes the democratic nature of America’s creation of the Colony: “But the terrifying truth is that we as a people have created the Colony through democratic means.” Hayes means to apply responsibility and complicity beyond a narrow seat of power, offering himself up first as one who has enjoyed the privileges of citizenship in the Nation and wielded the various degrees of power and comfort it has afforded him.

A great deal of the book draws from Hayes’ reporting at MSNBC, but he broadens the first-person dimension of the book to assess his own complicity, be it active or passive and unconscious. The book opens with a call to the police to report a couple’s argument on the street that he worries might conclude with violence against the woman, though no crime has occurred. Hayes remains troubled that he made the call. It ends with Hayes, some time later, witnessing a foursome of black teens on bikes harassing park-goers in Brooklyn’s Prospect Park, a sort of interstitial, contested space between the Colony and the encroaching gentrification of the Nation. The boys finally steal a man’s phone and peel off, and Hayes faces an ethical dilemma after understanding his power as a member of the Nation pitted against these boys. “I took my phone out, held it in my hand, and considered whether to press the button.” The book ends with a sort of paralysis.

In an appearance on MSNBC colleague Rachel Maddow’s program, Maddow lamented that Hayes’ new offering lacks the prescriptive quality concluding his first book. And it can certainly be said that Hayes’ second book is less optimistic than his first, which saw the green shoots of Occupy Wall Street as a productive reaction on the left to the American crisis of authority he identified. "A Colony in a Nation" is published in the first turbulent and unsure days of the Trump era, and it ends with tortured ambivalence: Does one call the cops?

But that civil quandary of Hayes’ — does one call the cops? — was had before Trump arrived. Does one call the cops in the Trump era? Much of the vital information Hayes reports from Ferguson was gathered in a robust Department of Justice investigation under then-Attorney General Eric Holder. It is nearly impossible to imagine Attorney General Jeff Sessions reacting similarly. In fact, it’s much easier to imagine Trump’s top cop assuming the role of draconian viceroy instead. In January, Trump ominously threatened to “send in the feds” to combat crime in Chicago, and he advocated for a nationwide “stop-and-frisk” policy in September (one assumes that it won’t be the cul-de-sacs of affluent suburbs being so patrolled). The fiscal dilemmas in places like Ferguson that necessitate the armed tax collection in the form of penal fees and fines can only be imagined to worsen with Trump-era Republican domination at all levels of government in much of the country. It’s too easy to envision only an acceleration of what Hayes identifies, hardening demarcations of the Colony and the Nation and a widening experiential gulf between the inhabitants. Perhaps Trump’s rallying cry for 2020 will be to build a wall.