Bad times, great art: "Ass on chair." There is no trick to writing; there is just doing

There will be threats from above and tweets in the night, but don't wait for conditions to be perfect, just work 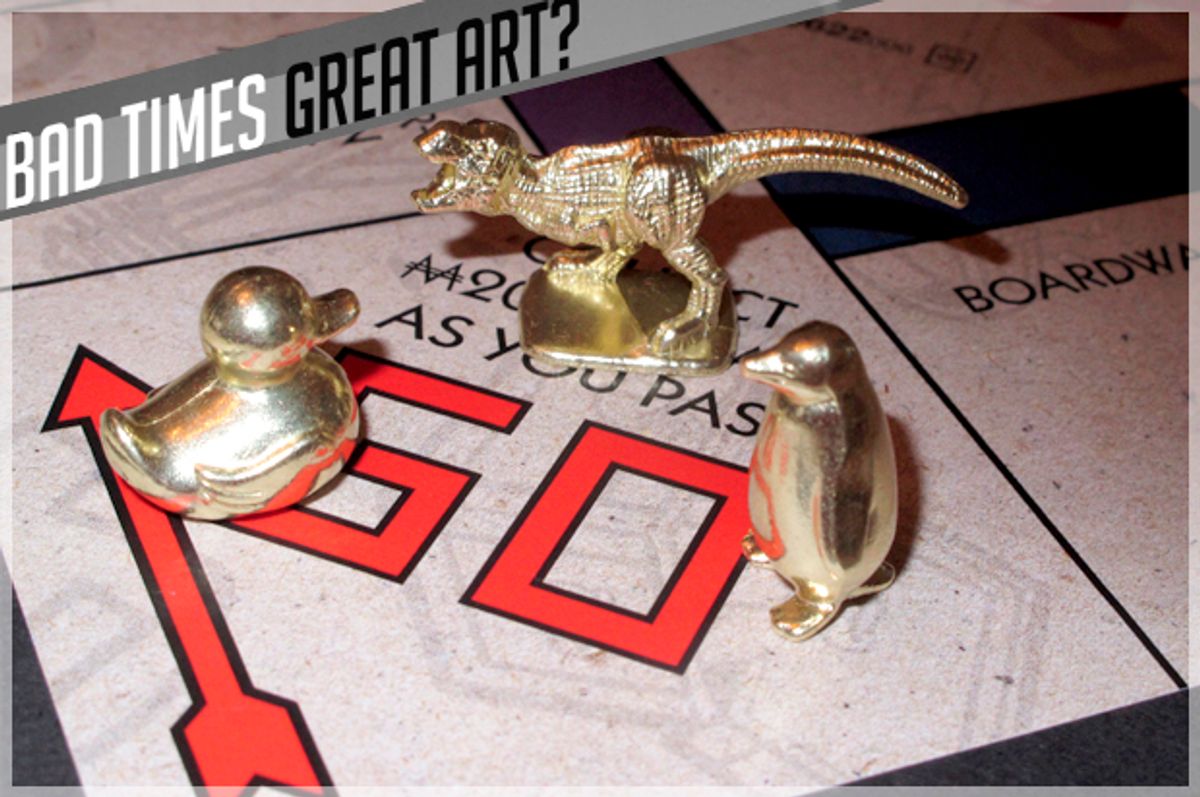 Monopoly is our Christmas Eve ritual. My kids, sister, and nephew — aka, Top Hat, Shoe, Racecar, and Horse & Rider — hit the board running, snapping up property on their first rolls of the dice. The Scottie dog and I went directly to jail.

Early in the new year, while strolling through Google, I found that Monopoly had a precursor called The Landlord’s Game. It made its debut during the muckraking era of the early 20th century — a political statement to show that landlords get rich while us renters — what is the mortgage I will never pay off if not rent to the bank? — grow poorer and more miserable. The Landlord’s Game and its popular Parker Bros. descendant seem to presage the Age of Trump. Even the properties are named for streets in Atlantic City, home to our president’s bankrupt New Jersey gambling empire. The shuttered Trump Hotel and Casino and billion-dollar Trump Taj Mahal, which Trump once described to reporters as “the eighth wonder of the world,” are on the Boardwalk.

I never came close to buying Boardwalk during my holiday Monopoly game, but there was a brief period when Scottie and I seemed to bounce back. Then I realized that passing Go and collecting $6 each time anyone landed on my lousy property wouldn’t do more than stave off the pecking and scratching annoyances of Community Chest and Chance. It was only time before Horse & Rider, by then in the hotel business, would wipe me out. The game made me edgy.

I recognized the nasty tightness in my stomach. It was the same financial anxiety I feel every day as a writer trying to earn a living by her pen — or laptop.

So, when asked if bad political times inspire great art, my answer is no, but with a twist. Distraction is the writer’s enemy no matter what causes it.

Sometimes, the disruption is personal. I find it hard to be creative when I’m consumed by the next mortgage payment and other adult responsibilities to my family of four. When the Internet isn’t working at our house, we’re always relieved when it’s a router glitch and not because the bill on the front hall table is past due. I put necessities like groceries and car payments on my credit card, but I obsess over what will happen when I reach my collective credit limit — and how I’ll pay off the balances that have grown so steep I need carabiners and an ice pick to reach the summit.

From the broke and getting broker perspective I say that anyone who believes art, good or bad, is born of struggle must also buy magical thinking, the notion that inspiration strikes only when the moon is in the seventh house, or other “alternative facts.”

The larger societal meltdown we’re living through hasn’t helped my mental state. Like other types of turmoil, political unrest is the anti-muse. Fear makes it hard to concentrate. I worry about the next executive order to be handed down from our landlord-in-chief — and that next tweet. Even after the GOP failed to roll back the Affordable Care Act, I wonder whether or not my family will have health insurance next year. The tax break that will halve taxes for the rich and almost certainly raise the taxes paid by the middle and upper-middle classes is a last straw I cannot afford.

The apprehension that under Trump, policy changes will have ripple effects with the force of a hurricane is reality-based, and it lurks in my head — and the heads of everyone I know who earns their living in creative fields. I recently attended a potluck dinner with other women writers in Washington, D.C., where not just the chit-chat over wine but the formal agenda turned on what we can do to protect all we care about that’s being swept away: “everything,” as one woman said, but especially climate change, reproductive rights and diversity. Will we make phone calls? Lobby Congress? Run for political office ourselves?

These thoughts are hardly conducive to making art.

But distractions, writer's block and mid-day trips down the rabbit hole that is this administration are not an option. The motivation is not a perfect setting. It’s that, 400 miles away, an impatient editor is tapping her foot, waiting for copy. Even without our larger times, creativity is its own challenge.

A Publishers Weekly essay by the Ethiopian-American novelist Dinaw Mingestu says what must become true if you are going to make your living in the arts: “I’ve learned now not to be precious about the conditions I work in,” he writes. “I’ve learned not to wait for the total silence, which on the vast majority of days, will never, ever come. And so forget about hoping to find the proper weather, or the light that pleases you best of all colors . . . Abandon the desire, masked as need for perfectly pressed coffee.”

I like Mingestu’s parting advice most: “Write in crowds, in alleys, in the back seats of crumb-filled cars. Steal time from the crowded world even if it's only a few minutes, or a blessed hour.”

Your work will likely be different than it would be under perfect circumstances, but not much different. It is unlikely that intrusions of real life, including the dread that our country is balancing on the edge of a disaster from which we may not be able to recover, will make for a masterpiece. Creative work requires letting your mind run. Sometimes it runs straight to the thing that must not be thought about until the workday is done. Rarely is this good for the product, but the choice is only working or not working.

When I was starting out as a journalist, I asked my friend Philip Hamburger, a New Yorker staffer for more than 60 years, if I could take him to lunch in exchange for his wisdom on writing. “I’d love to go to lunch with you,” he said, ever courtly. “But I can tell you everything I know about writing right now.”

He paused. Then he said, “Ass on chair.”

There is no trick to writing. There is just doing. Twenty-odd years later, to “ass on chair” I would now add: ass in the shower, on the subway, in bed in the middle of the night, and yes, in my crumb- and baseball-cleat filled car.

To be a writer is to always be writing, or at least thinking about it — and my artist friends treat painting and sculpture the same way. This does not just happen in times of struggle. Real writers — and artists and musicians — work in good times or bad. My friend Phil, who never leapt into the computer age, thought out every word before he sat down to his typewriter to put it on paper. His late wife, Anna, said that for one story he was having a particularly hard time working out, he paced back and forth in the living room of their New York City apartment so frenetically that she finally said, “Phil, why don’t you just open the window and jump?"

The process is enough to put anyone off the craft. Me included.