Democrats, give Neil Gorsuch a chance: As a Supreme Court Justice, he could be an ally against Trump

There's great potential for lawlessness in the Trump administration. Gorsuch’s commitment to law could be valuable 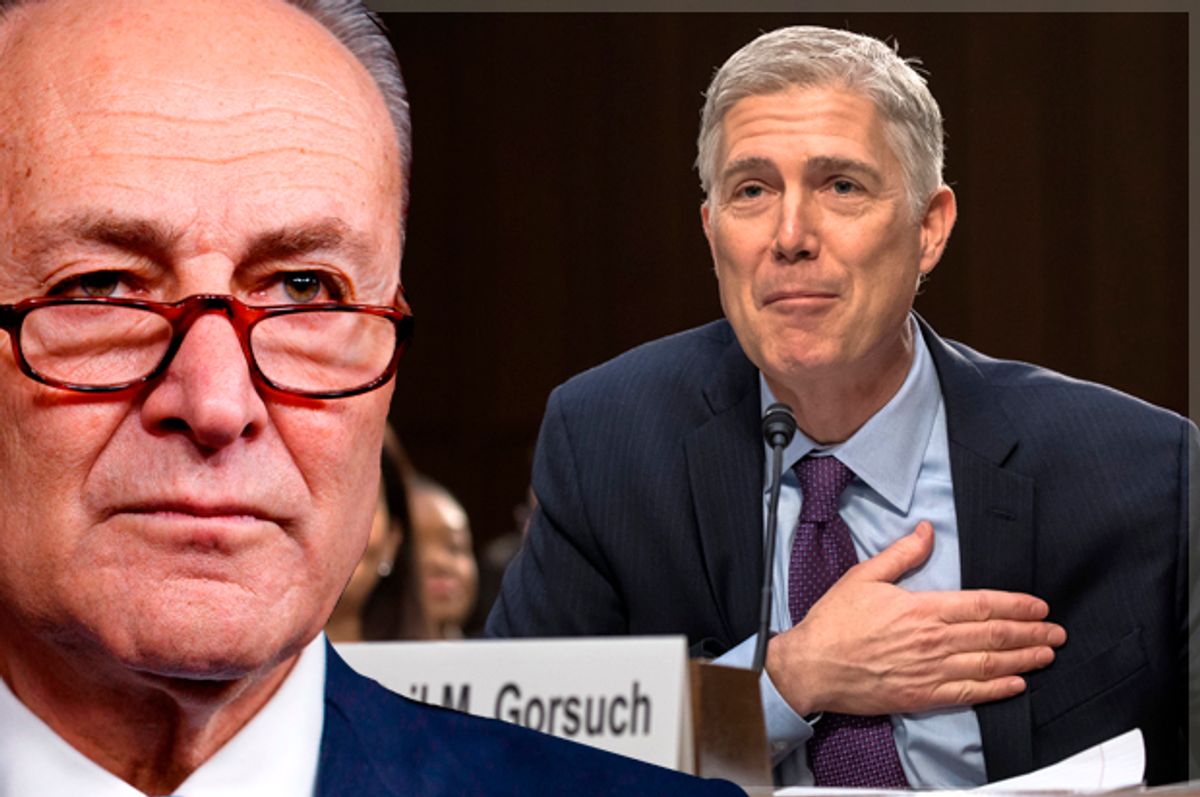 In creating an effective opposition to President Trump, the Democrats need to carefully consider which hills they’re willing to die on. Stopping Judge Neil Gorsuch from joining the Supreme Court is not an issue over which Democrats should shed any political blood. Nevertheless, Senator Chuck Schumer, D-NY, has announced that Gorsuch will be filibustered, thus inaugurating another political fight over the Court that will further weaken the public’s perception of that venerable institution.

In both his judicial record and in his confirmation hearings, Judge Gorsuch has proved that he is a uniquely fair-minded jurist who cares deeply about the judicial role. In a time of deeper and deeper divisions between Republicans and Democrats, Gorsuch has been almost shockingly conciliatory, with 97 percent of his 2,700 cases having been decided by unanimous decision. Only 14 of his 800 majority opinions (1.75 percent) drew dissents from his colleagues. This on a court where 12 of Gorsuch’s co-judges were appointed by Democratic presidents, while only five were appointed by Republicans.

If Democrats would stop imparting to Gorsuch their hatred for the man who nominated him, and if they would stop seeing judges as mere party apparatchiks, they would see a man who could be an ally in their upcoming legal fights against the Trump administration. But Gorsuch’s clear commitment to the rule of law hasn’t been enough for Democrats like Schumer, who has complained that Gorsuch has “declined to answer question after question after question with any substance. . . . All we have to judge the judge on is his record.”

If they looked closer at that record, they would see a man who applies the law evenly regardless of who’s before him, whether that’s an embattled criminal defendant or, perhaps one day, President Trump. There is a great and worrying potential for lawlessness in the Trump administration. His past treatment of judges who have ruled against him shows that it is not at all unlikely that Trump might one day resist a Supreme Court ruling. If the Supreme Court stands in Trump’s way and the president tries to brush them aside, it will take strong-willed justices with deep reverence for the law to resist him. Gorsuch has amply demonstrated that he is such a judge.

But, based on their questioning of Gorsuch, Democrats have seemingly decided that all judges are essentially legislators, voting for what they like and rejecting what they don’t like. With that outlook, it makes sense that Gorsuch confuses them. “My job isn’t to write the law, Senator, it’s to apply the law,” he said, and his record proves he’s being honest. A judge who “preferred the corporations,” or who “always ruled for the little guy,” would not have Gorsuch’s astounding record of unanimity.

The most we should ask of any judge is to be fair-minded and to focus on the law, not on the side he wants to win or the policy choices he prefers. Nevertheless, in their questioning Senate Democrats have continually demanded assurances that Gorsuch will prefer certain policy positions, such as a desire to condemn money in politics or a guarantee that he will rule for the underdog. That questioning prompted Senator Ben Sasse, R-NE, to wittily ask Gorsuch, “Have you ever gotten to a little league game early, pulled the umpire aside in the parking lot, and asked him or her to commit in advance that they will decide the games for the underdog?”

Gorsuch’s commitment to law could also help Democrats in more particular areas. He has written critically about the deference that is given to administrative agencies, which have been given by courts broad leeway to interpret the laws passed by Congress. That means, in Gorsuch’s words, that an “avowedly politicized administrative agent” who is “seeking to pursue whatever policy whims may rule the day” can enact significant changes in the law.

If Scott Pruitt’s EPA decides to ignore the plain text of, say, the Clean Water Act, who better to decide that case in accordance with the law than Judge Gorsuch? If Trump decides to ignore the Appropriations Clause of the Constitution and to spend money to build the wall regardless of what Congress says, who better to enforce the Constitution than Judge Gorsuch? And if Trump decides to start deporting people in ways that violate federal law and the Constitution, who better to stop him than a judge who has previously said that illegal immigrants should be able to rely on the law rather than arbitrary decisions of immigration agencies? In fact, many were surprised, myself included, when President Trump nominated Judge Gorsuch over the other purported “finalists” — Judge William Pryor and Judge Thomas Hardiman — because, of all those, Gorsuch is the least likely to put up with Trump’s legal shenanigans.

But Senate Democrats are more interested in whether Gorsuch will recite their catechism — “stop money in politics; stop the corporations stomping on the little guy” — than whether a judge who believes in the rule of law should sit on the nation’s highest court. Democrats are also still understandably brooding over the stalled confirmation of Chief Judge Merrick Garland, who was blocked by the blatantly partisan tactics of Republicans. But rather than trying to get back at Republicans, Democrats should focus on the larger issues at stake and realize that, when the important battles come, Gorsuch could be a valuable ally.

Trevor Burrus is a research fellow in the Cato Institute’s Center for Constitutional Studies and managing editor of the Cato Supreme Court Review.