Art attack: Why do people try to destroy museum masterpieces? 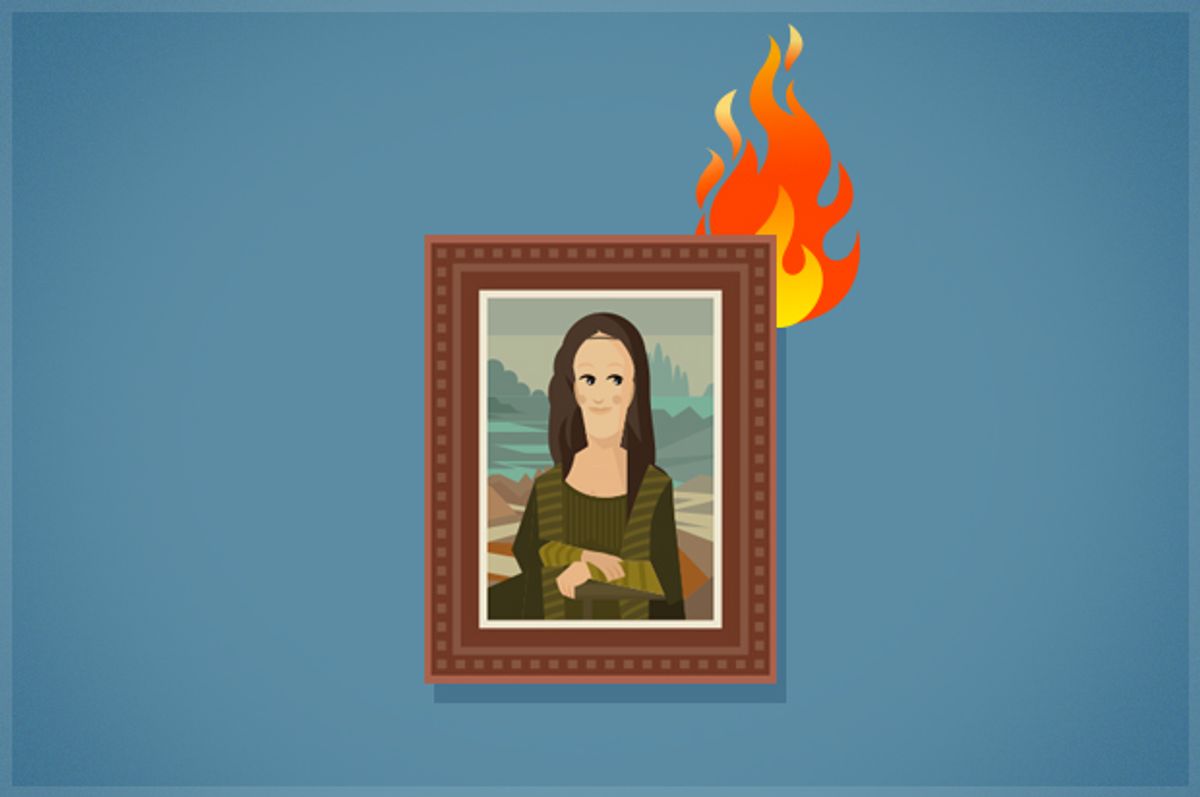 On Saturday, March 18, a man “with no fixed abode” slashed Thomas Gainsborough’s "The Morning Walk" (1785) with a screwdriver at London’s National Gallery. He was quickly detained by visitors and museum staff, and the damage appears to be fixable — the paint was cut, but the screwdriver did not pierce all the way through the supporting canvas. Conservators are brilliant surgeons and the scars should be invisible by the time they are done and "The Morning Walk" is back on the wall.

If you need evidence of this, just stroll to a nearby room at the same museum and look at Velazquez’ "Rokeby Venus." It was knifed in 1914 by a suffragette who was outraged at the arrest of Emmeline Pankhurst for protesting in favor of women’s right to vote. These slash marks were carefully healed and only three pale, barely visible scars can be seen on Venus’ back. A similarly impressive repair can (barely) be spotted on Rubens’ "Adoration of the Magi" at King’s College Chapel, Cambridge. In 1974, an IRA activist carved the letters “I-R-A” into the canvas. The patching was so good that today, the ghosts of those letters can only be seen when you examine the work at a sharp angle and against slanting light.

But these attacks prompt questions. First, could security at major museums like the National Gallery be improved to prevent such incidents, however infrequent they may be? Second, why on earth would anyone decide to attack a work of art, particularly one as innocuous and unobjectionable as a Gainsborough portrait? And third, is the way that we in the media handle attacks on art just compounding the problem?

The security question is one on which I lecture and discuss in my summer course as part of the ARCA Postgraduate Program in Art Crime and Cultural Heritage Protection. Having worked with numerous security directors of major museums, I know that there is a balance to strike between keeping art safe and fulfilling the museum’s purpose of making it accessible to the public.

There is no such thing as a risk-free museum, but there is a way to minimize risk of damage and theft, a way that many top museums have chosen (the Louvre, the Prado, the Van Gogh, the Uffizi, to name a few), but which the National Gallery has not — install airport-style security at the entrance. It is a modest inconvenience to museum-goers, but one that they will be used to, from travel in this day and age: moving single-file through a metal detector and having their bags scanned before entering the museum to explore freely. This method would prevent attacks with metal objects, like knives and screwdrivers, and would be a strong deterrent to any attacks at all — potential perpetrators are likely to be scared off by having to pass under the scrutiny of security and move slowly into the museum, clearly filmed on CCTV, and with nervous or suspicious behavior likely to be noted before they even enter. In an era of concern over terrorist attacks on populous sites, this is also a good idea. Of course, a determined baddie can still find ways to damage art, but the risk is mitigated. Such security is also the best deterrent for thieves, who would have to enter and exit via a gauntlet of security and a tangle of guests.

Why certain art is targeted by vandals is a complicated question, and last week’s attack on a seemingly unobjectionable portrait of an 18th-century couple is frankly bizarre, and suggests that there may have been no motive linked to the content of the painting itself (we’ll get to that in a moment). I ask my ARCA students to chart characteristics of art in danger of being attacked, and it falls into specific categories, if we look back at dozens of historical examples of vandalism, from "Mona Lisa" to "Guernica," to Michelangelo’s "David" and "Pieta," to "The Night Watch" and so on. Such acts that have an ideological rationale for the object targeted represent one category: the destruction of Catholic statuary during the Reformation, the Taliban dynamiting the Bamiyan Buddhas, ISIS’ smashing of ancient sculptures and even American soldiers tearing down statues of Saddam Hussein during the Iraq conflict. People strike out at objects that symbolize an idea that they wish to damage, with the artworks acting as a stand-in. Vandalism is the random defacing of objects, in which there might be a message that the attacker wishes to send, but their choice of target is not a loaded one.

Art that tends to be targeted usually falls into one of three categories. It may be very famous, and attacking it is seen as a good way to get attention, like John Hinckley trying to murder then-president Ronald Reagan in order to get actress Jodie Foster to notice him. It may be religiously or politically charged, like Chris Ofili’s "The Virgin Mary" (made with elephant dung) or Andres Serrano’s "Immersion (Piss Christ)." Or it might be sexually provocative, like my favorite painting, Bronzino’s "Allegory of Love and Lust." This work, also in London’s National Gallery, was attacked in 2003 (the year I was visiting it regularly, writing my Master’s thesis on it). An unemployed 36-year-old punched the painting once before being tackled by security, doing no damage but prompting the painting to be covered in protective glass. This was not reported in the news at the time. I just happened to notice the glass suddenly installed, as I was visiting the painting several times a week. Artworks that fit these categories are at highest risk. Thomas Gainsborough’s "The Morning Walk" fits none of them.

So why was it attacked? Sometimes the rationale offered by vandals has a logic to it; at other times it seems that the art is just a magnet for mental instability. There is a serial Rothko vandal, a known quantity among security directors, who travels around trying to damage paintings by this artist — works so abstract that it’s hard to imagine what the objection could be. The suffragette who slashed the "Rokeby Venus" chose to target a work that she felt objectified women, but her main goal was to be interviewed by the press in order to get a public voice to speak out about her cause. The Hungarian man who attacked Michelangelo’s "Pieta" with a hammer in 1972 did so while shouting “I am Jesus Christ, risen from the grave!” The Italian man who, in 1991, attacked Michelangelo’s "David" (also with a hammer) rationalized his action by explaining that a painting by Veronese told him to do it (he also recently attacked a plaque in Florence, so he seems to have an enduring mania for this sort of behavior). Let no one doubt that art provokes, stirs emotions, raises passions. Attacking it is also inevitably noteworthy, because art is of extremely high value (financially and culturally), and it is almost certain to be reported in the media.

And now we come to the third point. You may have noticed that I have been careful not to include the names of any vandals in this article. That is on purpose, and is something I would recommend as a policy for all media. We cannot prevent art from moving people, very occasionally even moving them to violence against it. But we can eliminate a frequent rationale for attacking art — achieving one’s 15 minutes of fame. Would Hinckley have attempted to murder Reagan if he had been certain that his name and picture would never be “promoted” by the media (and therefore Jodie Foster would never have known of him)? Would the suffragette have attacked the "Rokeby Venus," had she known that she would not be given a platform to speak about her noble cause to the media? A Veronese painting might still have told someone to whack "David’s" toe with a hammer. But if the media removed the incentive of simply getting attention, by refusing to publish names or photographs of vandals, or their subsequent statements, then it would eliminate one of the motivations for such incidents. Combine that with more universal airport-style security at museum entrances, and we would see significantly fewer thefts and attacks on art.