With 5 episodes left, a reluctant viewer stops cringing and sighing and makes peace with the controversial series 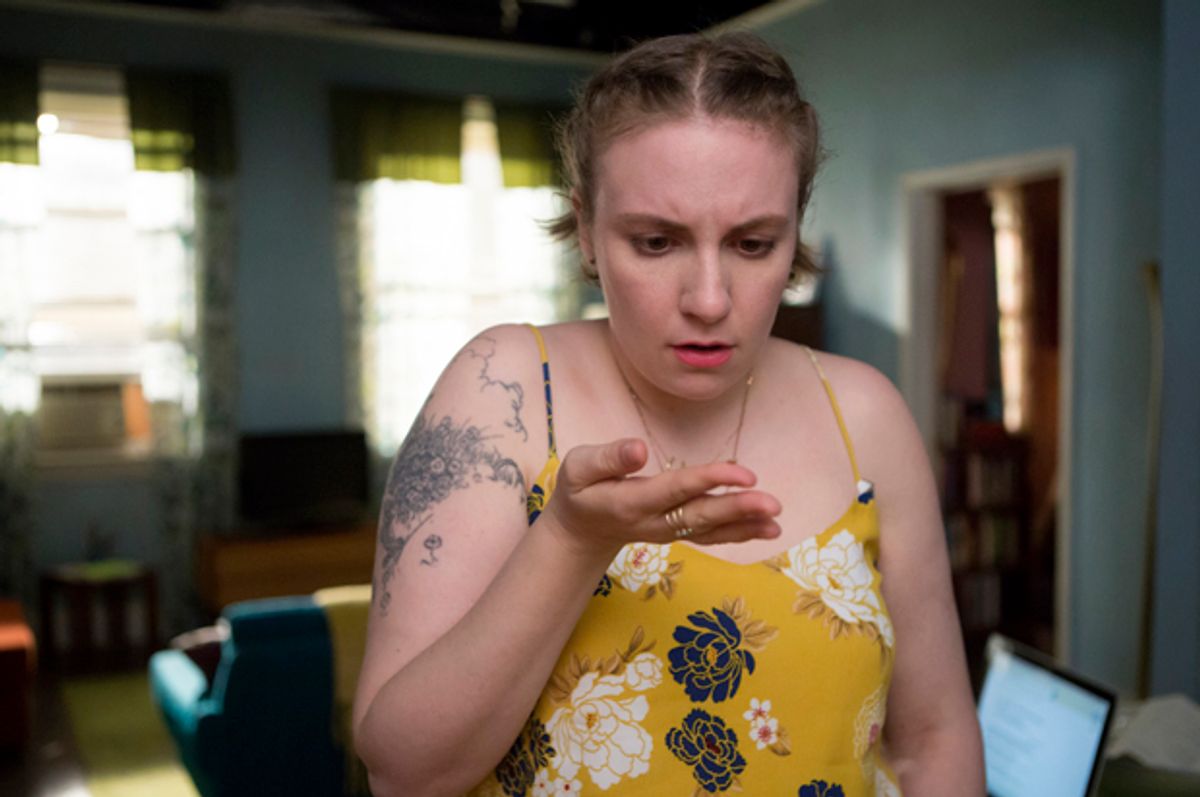 Obnoxious Brooklynites and the lightweight feminism of petty white girls are annoying AF in real life, so it’s unsurprising that it took years for me to embrace HBO’s “Girls.” By 2013, I’d seen so many Twitter stars thought-leadering on the boldness of show creator Lena Dunham’s bare thighs that it would have been sloppy not to have an informed opinion myself. These things come up at dinner parties. Friends and acquaintances had begun to gush about the series as reverentially as they did “Sex and the City,” another show that never interested me. I was bombarded by display ads for “Girls” on every passing bus depicting four cool city bitches — except this time the alpha chick was a thick, makeup-less wonder. It didn’t seem all that innovative beyond the fact that well-known brogrammer and executive producer Judd Apatow had finally anointed a female as funny.

I started watching because I didn’t want to get my Woman Card revoked, and I stayed for Jessa circa season 3. Jessa has never been hotter than she was in season 3. Now, as “Girls” climaxes in its last five episodes, I finally understand what I resisted so much. I wanted the zany ensemble to have epiphanies that neither they nor I were ready to receive. As closure looms, I can’t help but reflect on why coming-of-age stories either stir or constrict the heart.

It’s not unlike the reasons Marnie comes back to Desi. The promise and pull of a creative life is powerful, and the artistic struggle in a major city has always been real in “Girls.” Beyond all the well-documented privilege and prattle, over the series arc it has become more clear that the characters are serious about art. They’ve reached that critical moment where youthful dreams give way to realism, and you succumb to a suburban fate or carry on. Muses, obscurity, toxicity, broken relationships, hustle and talent characterize the best aspects of the show. As those elements began to take a more prominent role in the plot, “Girls” became more substantive and compelling. Perhaps I did too.

Between seasons 5 and 6, I had a 180. I finally wrote my first novel based on my personal coming of age. I became a creator of art, and not just a consumer. I gained new respect for those who describe their own vulnerably. I released my novel the day before my 36th birthday, so I could still reasonably claim I’d done it while I was young. Isn’t it quintessentially Millennial to attempt overachievement and flagellate one’s self upon failing? I am virtually certain Hannah Hovarth won’t write the 21st-century “Gatsby” until well into her 30s. The thought makes me long for a reunion movie in the future, but by then I’ll be trying to understand my 40s and the whims of younger women will likely still make me shrug and drive me to purchase more expensive anti-wrinkle cream.

It takes some living to have something interesting to say, and “Girls” has matured in that regard. “Girls” forced me to revisit my own experience in my 20s. Not unlike Carrie Bradshaw, I had a newspaper column in Chicago, back in the days before comments sections when analog haters snail-mailed letters ripping my ideas and body size when they didn’t like what I had to say. There were no Manolo Blahniks — none that I knew about, anyway. I secured most of my high heels for less than $100 at DSW, but it was still an exciting time of trial and error. Of being checked for my obliviousness, and expanding my point of view.

I wasn’t willing to grant Lena Dunham this berth throughout the years I watched “Girls.” I cringed every time she barreled unequipped into a nuanced subject, and sighed whenever she was cheered for her reflexively liberal feminism. It hit too close to home, but it also feels in retrospect as though it was indicative of broader societal shifts. Cultural appropriation be damned, there was Lena in a pantsuit rapping about voting for Hillary Clinton the day before the 2016 election. Lena was galvanizing her fan base of current and aspirational coastal elites who repped an urban life that proved to be as fictional in the grand scheme of America as her show. The inevitability of progressive girl power she and her peers believed in imploded, and it seemed like a shock to them. In the Obama Era, it felt crass whenever someone called Lena the voice of a generation. Is “Girls” better than “Insecure” or “Jane the Virgin” or “Atlanta”? It’s fitting in some regard that “Girls” will end in the Trump Era, an enduring testament to the Brooklyn bubble "Saturday Night Live" so perfectly skewered.

Her show was undeniably myopic, but I’ve come to believe that both “Girls” and Lena Dunham are important. I acknowledge her as a woman in the arena, and I look forward to how she evolves. When an artist has the fortitude to present an authentic representation of a perceived reality, we live in a critic’s world. Looking for flaws and undermining those efforts is not going to advance the self-expression of women. Intergenerational skepticism or judgment does not create a legacy of opportunity. A 30-year-old woman who has worked hard to achieve a rare degree of success should command some authority and artistic license.

With this new perspective, I’m enjoying the last season of “Girls” tremendously. When the credits roll, I’ll feel grateful to Lena for helping me reframe my own mistakes and triumphs too.