Where do right-wingers get all these anti-choice laws? There is literally a book

"Defending Life," the anti-choice lawmakers' playbook, rolls out new ideas after a big loss in the Supreme Court 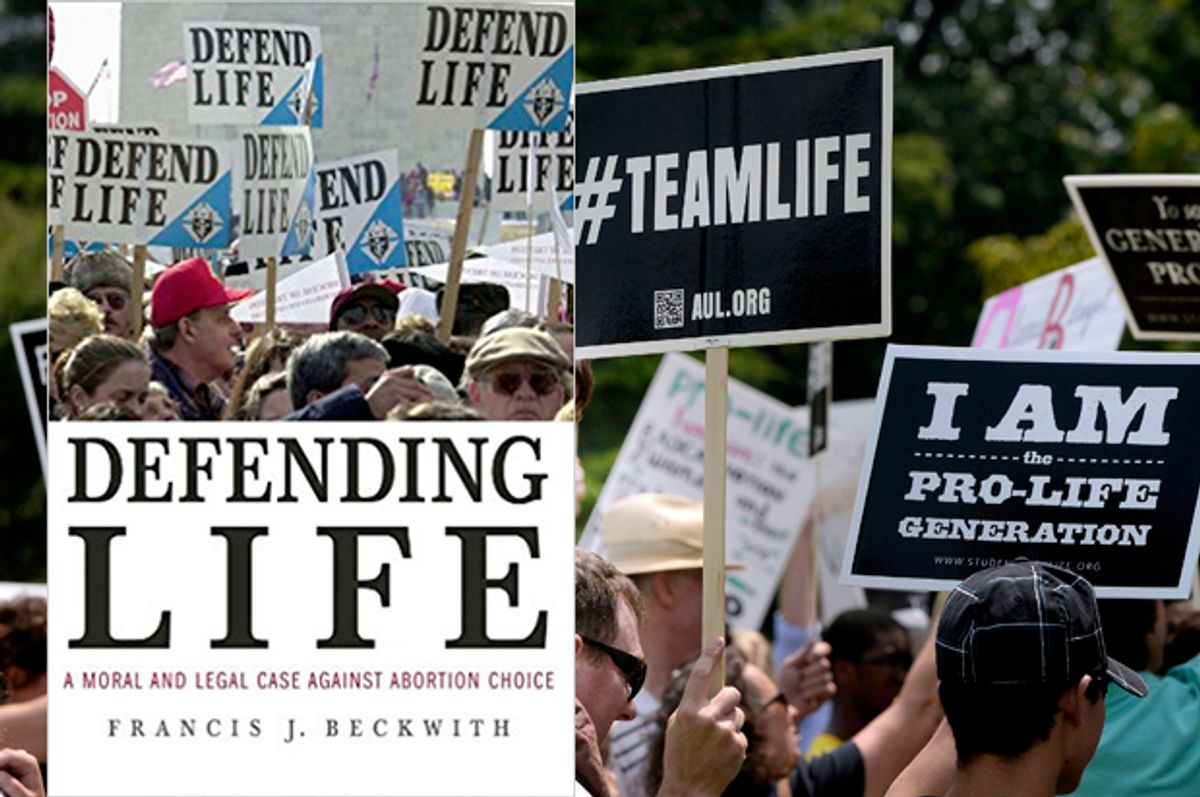 For those who have ever wondered how all these Republican state legislators seem to all come up with the same ideas for restricting abortion access at the same time, there is an answer: It's because of a group called Americans United for Life (AUL). The organization, which incorporated in 1971 to fight the then-growing movement to legalize abortion, puts out an annual model legislation handbook called "Defending Life," which is then distributed to interested legislators.

For the past couple of years, the handbook was released in January, ahead of the anniversary of Roe v. Wade. This year the book didn't come out until March. And it's no surprise.

Anti-choice forces "were dealt a pretty serious blow in the Supreme Court last summer, and realized that the sham [behind HB2] was basically exposed by the Court," said Amanda Allen, the senior state legislative counsel for the Center for Reproductive Rights, over the phone.

The Center for Reproductive Rights, in arguments led by Stephanie Toti, successfully argued to strike down the Texas abortion law in a case called Whole Woman's Health v. Hellerstedt. The state required abortion clinics to meet ambulatory surgical standards and to have hospital admitting privileges, which the state justified by claiming that they had regulatory authority over medical clinics. The court, however, agreed with Toti's argument that, since these regulations were medically unnecessary and were burdensome for clinics, they could not be justified.

The decision makes it more difficult for AUL to continue pushing anti-abortion regulations under the guise of protecting women's health.

“It’s clear that they were going to have to walk back a lot of the justifications for the HB2-like measures that they had promoted in the past," Allen said.

After reading the handbook, Allen said AUL is "very clearly walking back their pretense of women’s health," and moving toward what she called "a pretty brazen embrace" of what the anti-choice movement calls "fetal life interest" or "fetal dignity interest."

The handbook calls this approach the "Infants' Protection Project," a misnomer since abortions do not involve infants but fetuses, or, in most cases, embryos.

Some of the principal ideas tossed out under this "Infants' Protection Project" banner include: bills requiring women who have abortions or miscarriages to pay for funeral services for the fetus or embryo, bills banning abortion in the case of fetal defects and bills that would make it legal for a woman to sue an abortion doctor for "wrongful death" if she decides, after the fact, that she regrets getting an abortion.

“The great irony" of this shift in strategy is that AUL is doing this "after pretending for the last four or five years that they’re the ones that care about women’s health," Allen mused.

Of course, AUL denies it is taking women out of the picture, despite this shift in emphasis. The handbook claims the group is working to "protect women and their unborn children from the scourge of abortion."

The woman-centered model legislation does, in fact, operate under the assumption that no women really want an abortion, but only make that choice because they've been bamboozled by feminists or are being pressured by male partners. Possible bills include the "Women's Right to Know Act," which would force doctors to read female patients scripts full of false claims about the risks of abortion, or to falsely tell women that abortion can be "reversed."

"It’s hard to understand that they can continue to say they are pro-women and pro-women’s health, when all they’re trying to do is choke off access to a safe and common procedure," Allen said.

One could also argue that the proposed laws themselves demonstrate that AUL's stance toward women who consider having an abortion is not caring, but hostile. Telling women lies about abortion in order to scare or confuse them is not loving behavior. It's controlling and hateful, and indicates a desire to hurt and punish women for even thinking about abortion. You don't try to make already stressed-out people cry because you're their friend.

The authors of the 2017 edition of "Defending Life" try to strike a confident tone, but it's clear from the model legislation itself that anti-choice activists don't really know what to do in the aftermath of Whole Woman's Health v. Hellerstedt. Reading the handbook, one gets the sense that if anti-choice activists can't stop women from getting abortions, they will just try to make the experience as punishing as possible, with waiting periods, fetus funerals and lots of scary, false information.

Last March, Donald Trump upset anti-choice activists by saying that he felt that women should face "some sort of punishment" for getting abortions. That angered anti-choicers because it's important to their movement that they pretend they are in this to protect women, not punish them. But the cruelty of this 2017 "Defending Life" handbook suggests that punishing women was the goal all along.