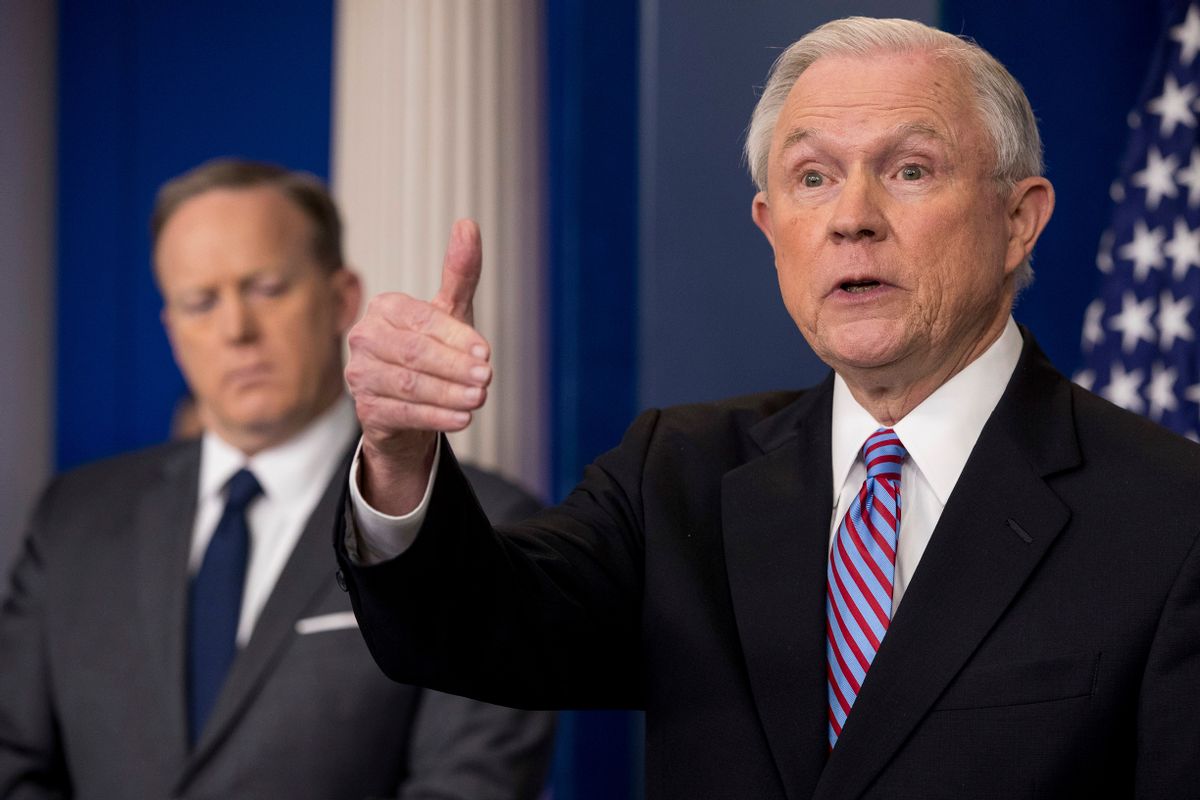 In one of the first public statements from the White House after the devastating defeat of the health care plan championed by President Donald Trump, Attorney General Jeff Sessions announced that the Trump administration will bar cities, counties and states that don’t fully cooperate with federal immigration authorities from receiving federal law enforcement funding from the Justice Department.

Sessions made a surprise appearance at the White House press briefing Monday afternoon, speaking ahead of Press Secretary Sean Spicer in a transparent attempt to delay a grilling about Friday afternoon’s stunning embarrassment for the White House. Less than two hours after Spicer had claimed that Trump had “left it all on the field” in his pressure campaign to get a recalcitrant conservative caucus of House Republicans to support his plan to repeal and replace the Affordable Care Act, the president demanded that House Speaker Paul Ryan pull the bill ahead of a floor vote.

On Monday, before Spicer had to account for the demise of Trump’s first major legislative push, Sessions threatened to strip some “sanctuary cities” of coveted Justice Department grants for state and local law enforcement.

The crackdown comes as the Trump White House says it will reach out to Democrats to try to win votes on Trump agenda items -- and after the president complained that no Democrats would back his failed health care legislation.

“Today I’m urging states and local jurisdictions to comply with these federal laws, including 8 U.S. Code 1373,” Sessions explained, as Stephen Miller, Trump’s senior adviser and a former Sessions staffer, stood by his side. That law states that no government entity can restrict sharing information with the Immigration and Naturalization Service regarding individuals’ citizenship or immigration status. Sessions asked so-called sanctuary cities to "consider carefully" the damage they are doing to national security and public safety by refusing to enforce immigration laws.

“Countless Americans would be alive today … if these policies of sanctuary cities were ended,” he said. “Failure to deport aliens who are convicted of criminal offenses puts whole communities at risk.”

The embattled attorney general pointed to the death of Kate Steinle, a woman who was reportedly shot and killed by an undocumented immigrant on a San Francisco pier last summer. Steinle's death was repeatedly cited by Trump on the campaign trail to argue in favor of an immigration crackdown and against sanctuary cities.

"We have simply got to end this policy," Sessions said on Monday, claiming that “charges and convictions against these aliens include drug trafficking, hit and run, rape, sex offenses against a child and even murder.” Sessions said such policies “make our nation less safe by putting dangerous criminals back on the streets.”

He explained that the Justice Department will require compliance with immigration laws in order for the cities to receive grants through the Office of Justice Programs. The office provides billions of dollars in grants and other funding to help criminal justice programs across the country. Most recently, its Office for Victims of Crime announced a grant of almost $8.5 million in support for victims of last year’s mass shooting at a gay nightclub in Orlando. Sessions said the office was expecting to award more than $4.1 billion in grants this fiscal year.

"We intend to use all the lawful authorities we have to make sure our state and local officials … are in sync with the federal government,” Sessions said. He added that the Department of Justice will “also take all lawful steps to claw back any funds awarded to a jurisdiction that willfully violates 1373.”

While the Obama administration had a similar policy in place, it didn’t end up enforcing that policy. Sessions said his DOJ would, and identified three grant programs — the COPS grants, Byrne grants and State Criminal Alien Assistance Program money — that already require sanctuary certification.

Earlier this year, Wall Street rating agency Standard & Poor’s concluded that more than 200 sanctuary jurisdictions across the country could be in jeopardy of a federal funding cutoff.

After Travis County, Texas, announced its jails would be less cooperative with Immigration and Customs Enforcement, Republican Gov. Greg Abbott cut $1.5 million in state funding to the county. As The Daily Beast’s Betsey Woodruff reported, Abbott’s retaliatory move has forced some courts in the city of Austin to crowdsource funding “for special courts designed to help War on Terror veterans with PTSD and parents with drug addictions.” CBS Austin reported that one such court in the city will run out of funding by May.

“At some point, you hit a point where the cuts are so much, it becomes so great that if you’re the sheriff, you have to have that discussion — you have to figure out what you’re going to do,” State Rep. Eddie Rodriguez, whose district includes part of Austin, told The Daily Beast.

Perhaps that is why even according to a Fox News poll released on Monday, a majority of Americans -- 53 percent of respondents -- oppose penalizing sanctuary cities by taking away their federal funding.

Still, more than 100 cities and counties were identified last week in ICE’s inaugural public name-and-shame list of sanctuaries. The information — including descriptions of crimes charged or committed by undocumented immigrants held in custody across the nation — will be updated weekly.

On Monday, Sessions specifically called on Maryland to scrap any movement toward becoming a sanctuary state.

"That would be such a mistake," he said of legislation that is currently making its way through the state legislature. "I would plead with the people of Maryland to understand this makes the state of Maryland more at risk for violence and crime, that it's not good policy."

Trump had said during the campaign that he would “defund” such cities by taking away their federal funding.

But legal precedent suggests that would have been difficult to do. Multiple Supreme Court cases, including Printz v. United States and NFIB v. Sebelius, have established clear precedent that cutting off federal funding in order to make municipalities enforce a federal mandate is unconstitutional. Furthermore, courts have ruled that cities have a right to enforce search and seizure protections against the federal government.

Shortly after Sessions’ announcement, Democratic National Committee chair Thomas Perez said in a statement, “Local law enforcement know their communities best and the Trump administration is trying to undermine their role by threatening to take away critical funds that make our communities safe and keep criminals off the streets. This administration not only is trying to bully law enforcement and make them ICE agents, but they’re trying to bully immigrant families. This is not who we are as a country.”