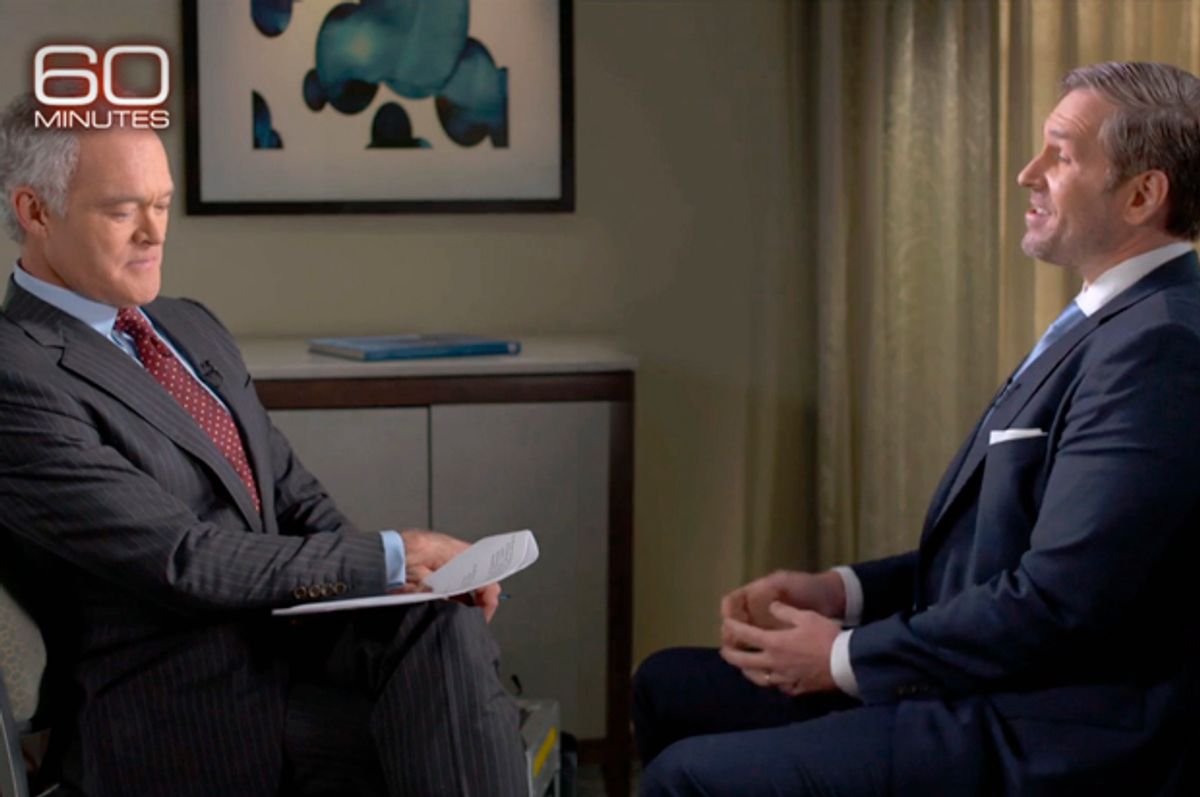 There are people who hold a certain set of beliefs and who may alter their arguments when faced with evidence that dispels their beliefs. And then there are those who will ignore the facts if they get in the way of a good conspiracy theory.

On Sunday night, "60 Minutes" took a look at the latter group of people, focusing in part on Michael Cernovich, a prolific tweeter, blogger and supporter of President Donald Trump who helped popularize the Pizzagate hoax. Cernovich told CBS' Scott Pelley that he's standing by the discredited and dangerous conspiracy theory:

Michael Cernovich: Oh, I believe it. I don’t say anything that I don’t believe.

Scott Pelley: That doesn’t seem like a very high bar.

Cernovich: It’s a high bar because I’m an attorney. I know how to weigh and measure evidence.

Cernovich also weighed in on his theory that Hillary Clinton had serious health issues, a hypothesis with no basis in fact:

Voiceover: That story was sourced to an anesthesiologist who never met Clinton. It got so much traction it had to be denied by Clinton’s doctor and the National Parkinson Foundation.

Cernovich: She had a seizure and froze up walking into her motorcade that day.

Pelley: Well, she had pneumonia. I mean —

Cernovich: How do you know? Who told you that?

Pelley: Well, the campaign told us that.

Cernovich: Why would you trust the campaign?

Pelley: The point is you didn’t talk to anybody who’d ever examined Hillary Clinton.

Cernovich: I don’t take anything Hillary Clinton is gonna say at all as true. I’m not gonna take her on her word. The media says we’re not gonna take Donald Trump on his word. And that’s why we are in these different universes.

Any attorney who has tried to prove in court that someone had a serious health problem without even providing expert evidence would probably be laughed out of court. This is an example of an evidence-free claim that has worked for a Republican base that absolutely hates Hillary Clinton but that doesn't work for anyone actually seeking the truth.

Here's how Cernovich said he performed on the "60 Minutes" program, according to BuzzFeed's Charlie Warzal:

“Dude I slaughtered it,” Cernovich direct messaged me shortly after the interview aired. Cernovich appeared to be reveling in the appearance — he Periscoped himself watching the interview live and then gleefully retweeted praise from the MAGAsphere as it poured in.

Among Cernovich’s supporters, the “Why would you trust the campaign?” line hit on two fronts: it effectively stopped Pelley’s line of questioning by asking him to prove an impossible negative while also tacitly suggesting that Pelley took the Clinton campaign at its word with little skepticism.

But according to Cernovich, he won, which is all that matters. This evidence-be-damned approach is working its way to the top.