Coming off health care defeat, President Trump and the GOP have no idea what to do next 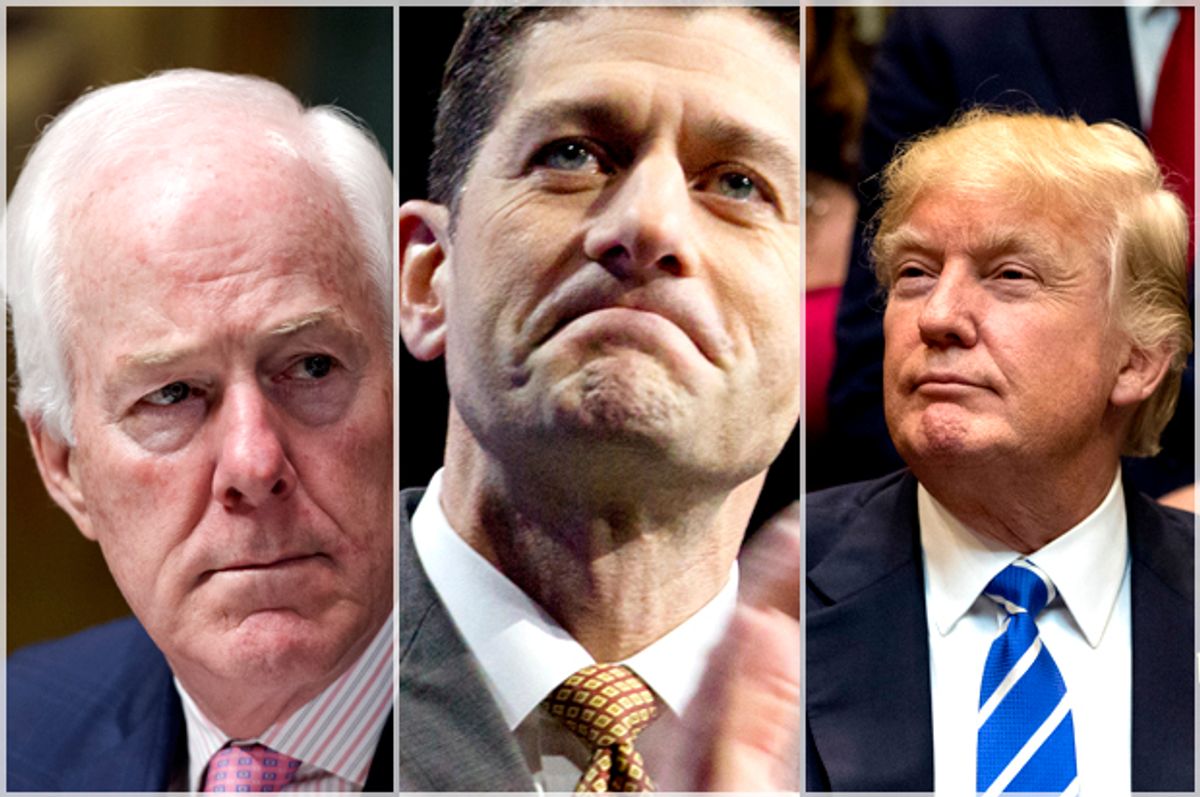 The Republican Party is divided as to how they should push forward with their schizophrenic agenda. Still recovering from its embarrassing health care defeat, in which seven years of campaign promises yielded absolutely nothing, President Trump and the GOP wants to turn to tax reform. But fighting factions within the party may make the desired tax overhaul unattainable.

Top officials at the White House told Axios that they do not see how they can change the math in the House of Representatives that killed the Obamacare repeal. As a result, Republicans are audaciously trying to devise a roadmap that would tackle tax reform and infrastructure at the same time, Axios reported Monday.

Other Republican officials refuse to abandon their collective dream of undermining Obamacare. Senate Majority Whip John Cornyn, R-Texas, said that he believes his Democratic colleagues will come to the table when the current health care system implodes.

"My hope is that Democrats will quit gloating at our inability to get it done on a party-line basis and join us in fixing" Obamacare, Cornyn said. He said that won't happen until "our Democratic friends have to start answering to the people who are being hurt by the failures of Obamacare."

Since Trump ordered House Majority leader Paul Ryan to pull their health care bill, Republicans have divided into camps that are happy to blame each other for the legislation's failure, The Associated Press reported

Rep. Ryan Costello, a more moderate Republican, for example, said that the the Freedom Caucus will have a lot of soul searching to do if the party hopes to govern as a majority.

But Rep. Dave Brat, a Freedom Caucus member, said on CNN that Trump received bad advice "from some in leadership who said that some of us should not even exist up here. We need to be on a team and get a good product."

As far as tax reform, Rohit Kumar, a former top tax aide to Senate Majority Leader Mitch McConnell, told The Washington Post that the White House and congressional leaders will have to decide whether they are for a tax overhaul that doesn’t widen the deficit or one that will simply become a major tax cut for businesses and individuals.

As GOP infighting and bickering continue, it looks like Trump will have to rely on his executive orders as wins for the administration.