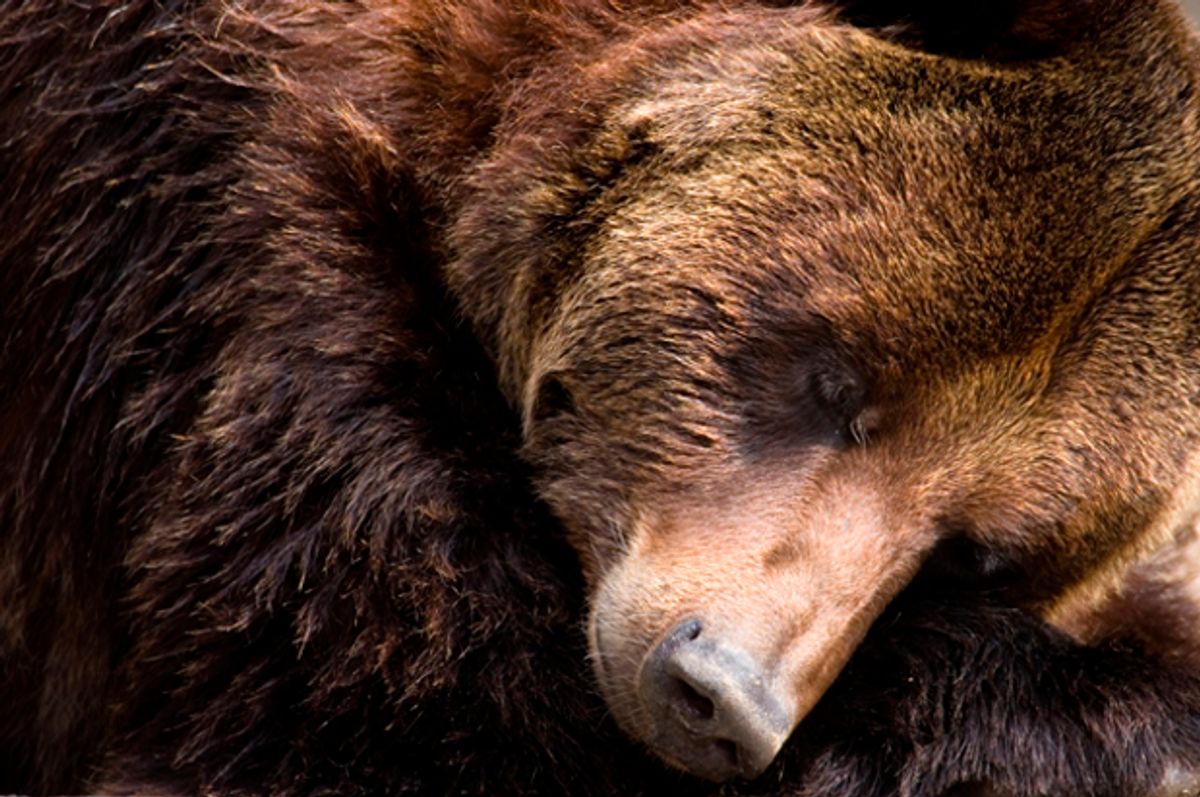 Republicans in Congress passed a bill to repeal a set of Alaska's wildlife regulations to favor a specific group of citizens: sport and trophy hunters. Republicans have allowed for shooting of hibernating bears with cubs; using airplanes to scout and shoot grizzly bears; and baiting and trapping bears with steel-jawed, leghold traps on federally owned land in Alaska.

Both of the Republican-controlled chambers of Congress recently passed a repeal of an Obama-era rule that had largely had banned hunting of Alaska’s most iconic predators on more than 76 million federal acres. The U.S. Fish and Wildlife Service’s rule also prohibited some controversial hunting practices on the state’s 16 national wildlife refuges.

Republicans reversed federal regulations and restored policies adopted by Alaska’s Board of Game to increase the number of animals such as moose and caribou — prized by hunters — by making it easier to kill the animals that prey on them.The Senate's approval of the bill to overturn the hunting limits last week means the measure now only needs President Donald Trump's signature to become a law.

The state game board and the federal agencies have clashed over how to manage predators, which affects the amount of available game for subsistence as well as trophy hunters, as well as authority over managing the lands. More than 560 wildlife refuges across the country have been set aside, as the U.S. Fish and Wildlife Service explained, “for wildlife first.” The federal government has argued that the goal on refuges and in parks should be biodiversity.

But as NPR noted, Alaska game officials argued that wildlife refuges are meant to ensure the "maximum sustained populations" of commonly hunted prey species, and thus seek to curb the populations of their predators — namely wolves, coyotes and bears.

The Obama-era rule, however, specifically prohibits  hunting for predator control. Proponents of this rule claim it prohibits inhumane hunting practices like shooting hibernating wolves and bears from planes. The Los Angeles Times noted that Alaska “state policies allow the killing of bear cubs and sows, killing wolves and their cubs in their dens, baiting grizzly bears, shooting bears from aircraft, shooting bears in baiting areas on the same day a hunter flies into a hunting area, and capturing bears with traps and snares.”

But Alaska's three Republican lawmakers argued that the Obama-era rule had to be repealed out of a concern for state’s rights. Republican Sen. Dan Sullivan argued on the Senate floor that the U.S. Fish and Wildlife rule "undercuts meaningful public participation in refuge management decisions [and] utterly disregards the legal protections and rights given to the state in the Alaska Statehood Act."

"We have to recognize this is not about the little polar bears, the little grizzly bears or wolves on television, this is about the state's right to manage — not allowing the federal government to do so," Rep. Don Young, R-Alaska, who sponsored the bill, said last month.

Republican Sen. Lisa Murkowski argued that the Obama-era rule is not about "a specific hunting practice," but an attack on the state's right to oversee its refuge lands. Alaska and every other state, she said, has "primary authority to manage its fish and wildlife, including on federal refuge lands. So let's not get confused here and think that because you have federal lands that somehow or another states do not have.”

While trophy hunters seldom receive an exemption from the banned practices under the Obama-era rule, Murkowski failed to mention that daily permits are indeed given out for someone to be an "aerial shooter" of game. (She also forgot to mention that it's the state Department of Fish and Game often uses gas on wolf and bear pups in their dens as a means of controlling predators of elk and moose.)

Both the National Rifle Association and Safari Club International, an organization for big game hunters, lobbied intensively on behalf of the rule change.

“This joint resolution puts an end to the Obama administration's last-minute attack on outdoorsmen,” wrote Chris W. Cox, executive director of NRA, in a statement praising Republicans in Congress. “Preserving the right of Alaska to manage its wildlife is a victory for outdoorsmen in all 50 states.”

The Senate approved Young's bill last week, in a 52 to 47 vote, with the support of all 51 GOP senators as well as Sen. Angus King, an independent who represents Maine. Republican lawmakers turned to the rarely used Congressional Review Act, a measure that allows Congress to cancel regulations issued in the final days of an outgoing administration, to allow the Senate to proceed with a simple majority — thus enabling GOP senators to avoid a filibuster by Democrats.

For its part, the House last month approved the bill, in 225-to-193 vote that mostly fell along party lines.

"This is another Obama-era regulation that upends the balance of federalism and hurts an American pastime," a statement from House Speaker Paul Ryan's office read. "That’s not acceptable for Speaker Ryan, who is an avid hunter."

For their part, Democrats in Congress made impassioned yet surely futile floor speeches against the measure. Sen. Tom Udall, D-N.M., stood next to a photo of a mother bear and her cubs and argued that the regulation is "not a state or parochial issue," since 85 percent of the nation's federal wildlife refuges happen to be in Alaska.

Favoring one species over another is not allowed, argued Sen. Cory Booker, D-N.J., in a speech opposing the bill.