Donald Trump's grotesque new "grand bargain": Did he learn nothing from the Obama years?

Bruised by health care, Trump wants to roll tax reform and infrastructure into one big package. It won't work 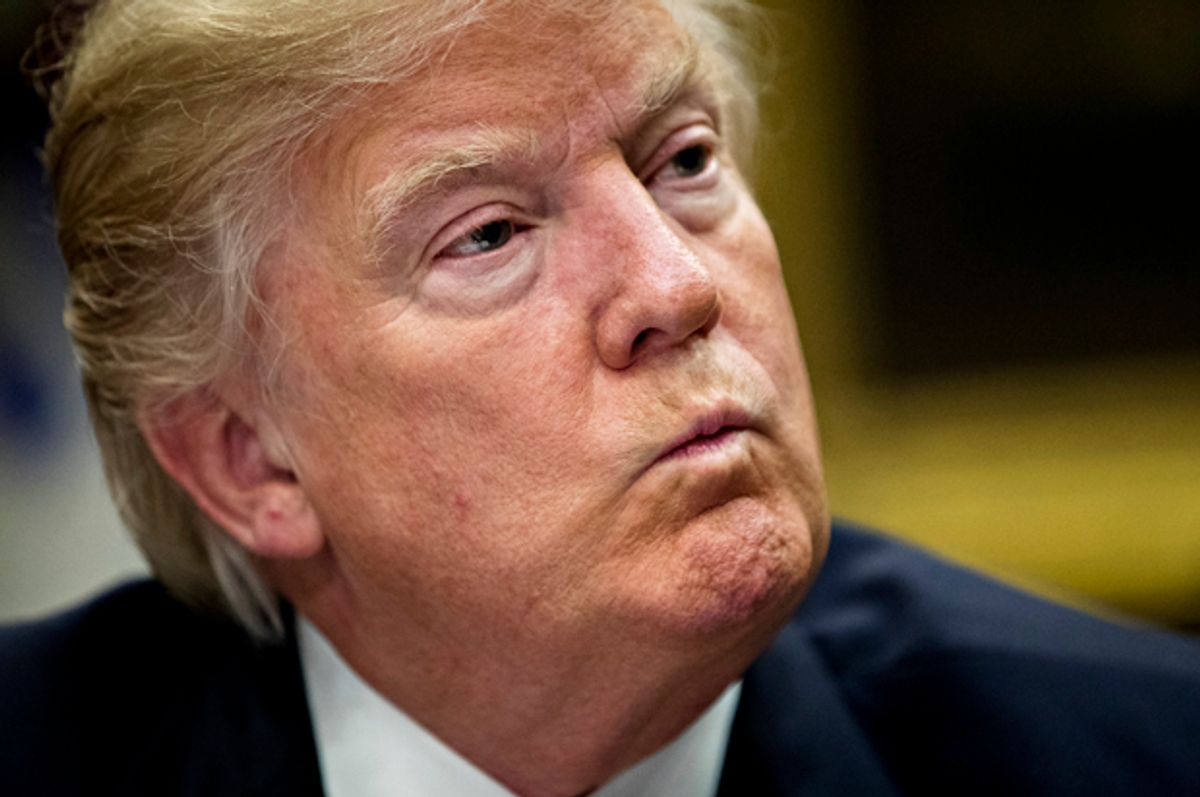 I have written many times that Barack Obama's most serious misjudgment was when he came into office and declared that he would bring people together and strike a "grand bargain" with all the warring political constituencies. It failed in grand fashion and the fact is that members of both parties were relieved. The idea of trying to do a huge bipartisan agreement in this era of sharp polarization was a major misreading of the political Zeitgeist. So naturally Donald Trump thinks it's a good idea to try a grand bargain of his own. On Monday Axios reported that the Trump administration plans to negotiate tax reform and infrastructure concurrently.

Obama at least had some reason to believe he had a mandate. He won a majority of the popular vote with unprecedented turnout. The country was in the grip of a major crisis, something that often brings both parties to the table. He thought it might be a transformative political moment and was determined to see if he could take advantage of it. But his grand bargain was a nonstarter from the get-go, even with his own party. It consisted of deficit reduction and "entitlement reform," which included cuts to Medicare and Social Security, in exchange for as much as $1 trillion in unspecified new revenue (including a carbon tax). And the biggest part of the package: health care reform.

Despite being rebuffed by Republicans over and over again, Obama kept at it all throughout his first term. Even when the GOP leadership signed on, knowing that it was a rare moment when Democrats would offer to take responsibility for cutting the already ragged safety net, Republicans couldn't get their people in line. The grand bargain plan never went far enough for us to find out whether  Obama could have gotten enough Democrats on board, but it's hard to imagine they would have been any more enthusiastic.

There's a reason it didn't work. Asking members of the two main parties to sacrifice their most important priorities in order to get the other side to deal doesn't really feel like much of a bargain. To Republicans, signing on to a large tax hike is akin to asking them to walk the plank. The GOP has been organized around lowering taxes for decades, and such a deal would have sparked tremendous outcry from the grassroots Tea Party types to Grover Norquist's Americans for Tax Reform — not to mention all of corporate America. As much as Republicans would have loved to make big cuts in Medicare and Social Security, Obamacare was never going to be worth it to them as a fair exchange. On the Democratic side, cutting those safety net programs in order to get health care would have been like asking the party's true believers to make Sophie's choice.

These are issues that go to the heart of each party's philosophy, and as long as they have the power to hold on to them, they will. The hard work that went into the Affordable Care Act showed the only way a party can enact a major policy in these polarized times: sheer partisan will. Bipartisanship just doesn't exist.

So what are we to make of Donald Trump nattering on about his next big legislative push being a package deal of massive tax cuts and infrastructure projects? Axios reported that Trump is unhappy with the House Freedom Caucus and thinks he can get Democrats to help him pass legislation and seal his legacy. It is true that early on some Democrats and others such as Sen. Bernie Sanders indicated a willingness to work with Trump on infrastructure. But if Trump thinks the plan he's proposing will fly with them now, he's got another thing coming. Here's how Sanders characterized it:

The New York Times' Paul Krugman simply called it "a giant ripoff," which is exactly what we should expect from Donald Trump. That's his specialty, as thousands of plaintiffs, hedge funds and investment bankers can attest.

We know, moreover, that Republicans are not going to go along with big increases in government spending. Any plan they would even be willing to contemplate would have to be a corporate boondoggle of epic proportions, and Democrats are not going to sign on to that. Indeed, there's almost no chance they would sign on to any Trump initiative because Democrats learned the lessons of 2009 to 2010 the hard way; they lost their majority. They are now gearing up for a 2018 midterm election that brings out the base of their party in large numbers in the hopes of taking back at least one house of Congress. Making deals with Donald Trump for corporate ripoffs isn't going to get that done.

Perhaps Trump and his brain trust, who obviously learned nothing from the Obama years, think that they can get the majority of Republicans (if not the Freedom Caucus) to go along with some deficit spending if they promise big tax cuts in return. The problem for Trump on tax cuts is that there will be no Democratic defections for sure and the infighting that's likely to break out among Republicans on that one will make deliberations on the health care bill look like those for a post-office naming bill by comparison.

This analysis by Shawn Tully at Fortune spelled out all the ways in all the Republican business constituencies will be at one another's throats. As he said, "For every winner there's a perceived loser." There's a reason the last big tax reform package Congress passed was during the administration of Ronald Reagan in 1986. I'm guessing that before long we'll be hearing Trump say, "Nobody knew tax reform was so complicated."

Obama could claim a mandate when he came into office and proposed his grand bargain. Trump, on the other hand, won the election only through a fluke of the Electoral College's functioning, is mired in a major scandal and is presiding over a congressional majority run by a bumbling leadership that is being held hostage by a gang of fanatics. Trump has already proved that his vaunted negotiating skills are better suited for licensing deals concerning ugly ties and cheap perfume than for running the most powerful nation on Earth. The likelihood that he can enact a grand bargain is roughly the same as the chance he can stop lying. That would be zero.