Sex and the city: "Harlots" provides an engaging view of the sex trade in 18th-century London

Hulu's tempting new drama views Georgian-era prostitution through the female gaze, and the result is fascinating 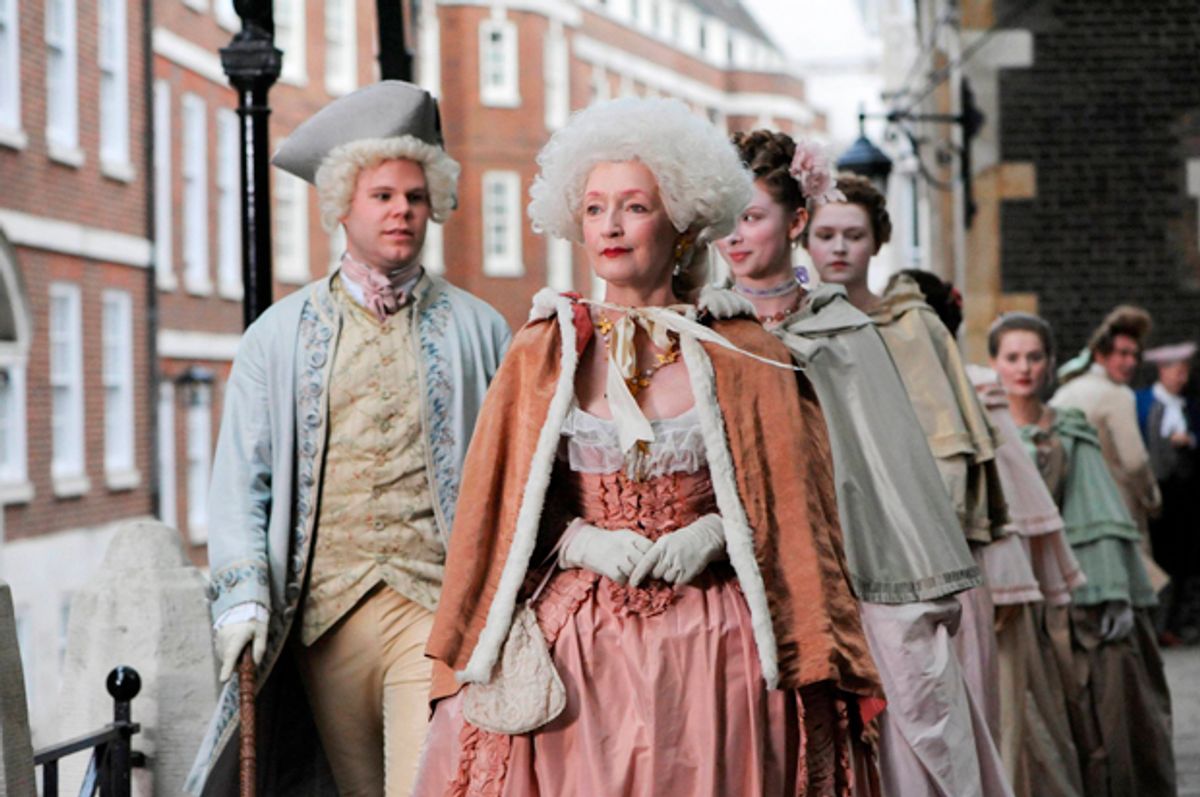 Behind the black market schemes and swindling, the gun running, drug trafficking and murder, “The Sopranos,” “Sons of Anarchy” and “Breaking Bad” are family dramas. Indeed, the back-and-forth yank between corruption and familial obligations made these shows extraordinary. Note, too, that each is fronted by a man who solidifies his power through violence.

Sex, when and if it comes into play, is a device to establish dominance and illustrate decadence. Whereas in “Harlots,” another family drama about organized crime — prostitution, conducted in an 18th-century London whorehouse — the sex takes center stage. The family in question is headed by a woman, a madam who makes a living off other women who sell sex, including her daughters.

A key plotline within the first episodes of “Harlots,” premiering Wednesday on Hulu, concerns the internal struggle of Margaret Wells (Samantha Morton) with how and when she should sell the virginity of her youngest daughter, Lucy (Eloise Smyth), and what price she can fetch for Lucy's deflowering.

Margaret’s dilemma isn’t moral, mind you. There’s never a question of whether Lucy can escape a life of prostitution or even if she wants to. Her turn in the world’s oldest profession is all but inevitable and not uncommon in Georgian-era London, when one in five women made their living as prostitutes.

For years now dramas have hung stories around the necks of difficult men who worked to ensure that their children wouldn’t have to sink into a life of crime. The women in “Harlots” are more concerned with their ability to assert their agency, which has a value to them above money. Margaret’s eldest daughter Charlotte (Jessica Brown-Findlay) is a gleaming example of a successful courtesan in 1763, a woman kept by a besotted nobleman willing to drain his fortune on her behalf. He wants Charlotte’s love and loyalty above all else. Since those are off the table, he’ll accept her continued interest. In turn, she goes where she likes and does as she pleases, for as long as the affair lasts.

Margaret, meanwhile, has a monogamous relationship and biracial children with a black man named William North (Danny Sapani), who helps her keep the business safe and running smoothly.

Given their having to choose between relinquishing their power and wealth to a husband or scraping their way through life as servants, how could someone judge these women for opting to sell sex? According to historians such as Dan Cruickshank, a housemaid in 18th-century London made about five pounds sterling a year. The average prostitute could clear two pounds from one encounter — easier money, earned at a higher rate.

“This city is made of our flesh,” Margaret stoically observes. “Every beam, every brick.”

A co-production of Hulu and Britain's ITV, “Harlots” depicts Wells and the other women in their circle as determiners of their own destiny as well as shrewd and ambitious, and the drama artfully balances the emotional impact this life has on Margaret and her girls with the political and social machinations they must navigate to remain profitable, not to mention alive.

"Harlots" is a series whose main roster of executive producers are women who have intentionally sought out female directors to helm each of its eight episodes. As a result, every episode is a conscientious construction depicting a woman's view of this word, from the modern, electric guitar-and-synth soundtrack to the drama's first glimpse of illicit coitus — a woman on top, of course.

The visuals are deliberately sensual if not universally sexy or pretty; for example, in its opening moments Lucy wears a cerulean dress and elegant shoes as she strolls through muddy streets, unconcerned with a ring of mud besmirching her skirt's hem. These small touches typify the sort of care at work in this period piece, elements that allow the characters to win a viewer’s empathy without dabbing too much concealer over the uglier truths about the era or the trade.

Think of “Harlots” as a work of heightened honesty. Every frame teases viewers with just as much beauty as it does filth, all without going overboard with imagery of sooty cheeks and catawampus chompers.

Sticklers for historical accuracy might take issue with the relatively clean faces on Wells and her workers, but only if they fail to appreciate the elaborate dialect largely inspired by “Harris’s List of Covent Garden Ladies,” that era’s Zagat’s guide for prostitutes. You can tell that the entire cast is having a wonderful time rolling the script’s ribald language off their tongues, but none so much as Morton, whose delivery and hardened stature dominates every scene she’s in.

As much as the first two episodes show us the power and relative freedom these women enjoy, showrunner Moira Buffini, who co-created the series with Alison Newman, mindfully weaves the nastier side of the business into the script. Midway through the series premiere, a jarring and violent crackdown tears through the brothel and leaves prostitutes who don’t have the protection of madams such as Margaret bleeding in the streets. And in the second episode, one of Margaret’s publicity schemes involves taking in a once-famous courtesan who is near death and ravaged by syphilis.

For while “Harlots” never paints these women as tragic or even guileful, the series executive producers Debra Hayward, Alison Owen and Buffini do not shy away from depicting the violence and unequal treatment they face in their work. But the producers’ determination to unspool these tales from the female point of view as opposed to catering to the male gaze is also acutely apparent from the start.

Margaret, Lucy and Charlotte are not above sashaying through the filth, but they do have goals to do better in life.  Margaret wants to own a nicer house where she can cater to a higher class of customer like those who frequent the establishment of Lydia Quigley (Lesley Manville), a madam who trains her girls in the fine arts and sets them in detailed tableaus inspired by Renaissance paintings.

And Charlotte is proof that she can cultivate girls of a similar caliber. Brown-Findlay, for her part, relaxes into this role with a vamp heat that viewers never saw in Lady Sybil on “Downton Abbey,” providing an ideal contrast to Smyth’s relatively more innocent Lucy.

Margaret’s daughters and her girls dress in colorful fashions that are louder and more refined than the tattered clothing worn by the “two-penny bunters” yelling offers to potential customers. Lydia and her harem, in contrast, drape themselves in pale pastels and deceptively virginal white lace, as if to announce their cleanliness. Lydia has the upscale market cornered and has no intention of sharing.

She’s also connected to powerful men and religious women who can work on her behalf to keep the Wells family in its place. By igniting this rivalry between Lydia and Margaret, “Harlots” mines a compelling conflict simmering with unspoken commentary about the justice system's double standard as well as pointing out the religious hypocrisy, all of which drives the action forward.

Through all this, “Harlots” efficiently maintains its focus on the significant and understandable motivation keeping these women in the game and at one another's throats. “The only safety is in money,” Margaret urgently explains to Charlotte. “Money is a woman’s only power in this world. You make it your solace and your dream, and one day wealth — real, lasting wealth — will make you free.”

Such a sentiment rings true for any modern woman, even those who feel uneasy about the central theme of “Harlots.” But any potential discomfort one may have with the subject is soon overwhelmed by the spirited intelligence and sharp style with which this series is executed. Surely the sex will sell “Harlots,” but ultimately the captivating performances and astutely written story are the enticements that seal the deal.