Trump's assault on the planet: Undoing Obama's work on climate change won't be as easy as new president thinks 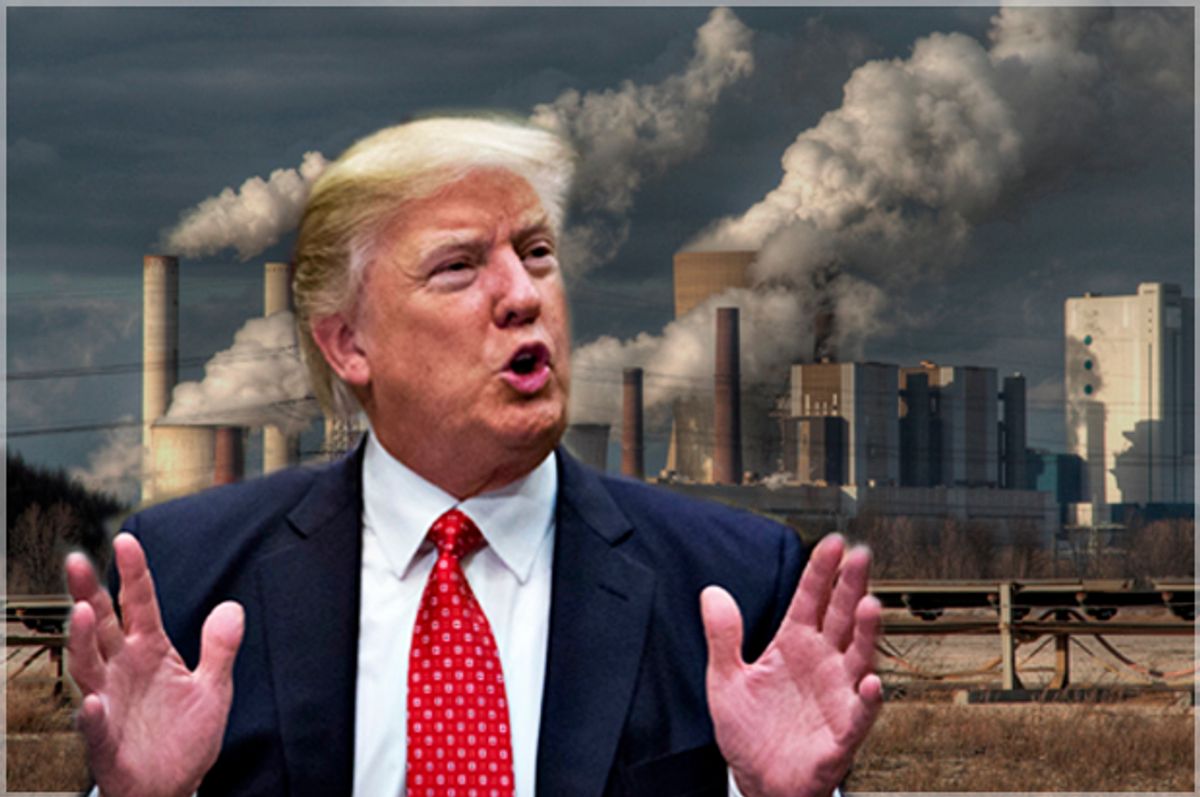 Monday night with the dramatic flourish typical of everything associated with Donald Trump, the White House announced a broad executive order to roll back all kinds of progress on climate change that has been made during Barack Obama's presidency. The order included directing the Environmental Protection Agency under Scott Pruitt to reconsider various rules meant to lower greenhouse gas emissions.

"This policy is in keeping with President Trump's desire to make the United States energy independent," a senior administration official said during a phone briefing on Monday evening. "He believes that we can serve the twin goals of protecting the environment and providing clean air and clean water, getting the EPA back to its core mission, while at the same time again moving forward on energy production in the United States."

It's all — no surprise — a bunch of nonsense, as this executive order does nothing to bring back jobs or help with energy independence. Instead, the executive order is another example of the Trump administration's ignoring basic facts in service of a right-wing ideology rooted mostly in a blind, irrational hatred of Obama.

Unfortunately for Trump, undoing Obama's climate legacy will require more than the stroke of a pen.

As Trump learned when he signed a half-baked order meant to fulfill his "Muslim travel ban" promise, there were scores of lawyers at the ready to challenge his efforts. That's even more true when facing down environmentalist groups.

To make things even harder for Trump, environmental lawyers are backed by a heavy amount of legal precedent that has established that the EPA is required to do its job and that scientific evidence matters when it comes to environmental regulation.

“With regard to rules and standards that are already in place — that the Obama administration has already put in place under the Clean Air Act — those can’t be undone by an executive order," Joanne Spalding, chief climate counsel for the Sierra Club, explained by phone.

All this executive order does is instruct federal agencies to reconsider existing rules. While there is no doubt that Pruitt would love to gut rules designed to combat climate change, there are legal constraints on what he can do.

"We have laws that hold agencies accountable, regardless of what administration they act under," explained Vera Pardee, senior counsel with the Center for Biological Diversity’s Climate Law Institute, over the phone.

A 1946 law requires courts to "hold unlawful and set aside agency action, findings, and conclusions" that are found to be "arbitrary, capricious, an abuse of discretion, or otherwise not in accordance with law."

Therefore, Pardee said, Pruitt's justifications for rewriting Obama-era rules must be "reasonable, non-arbitrary, non-capricious explanations as to why the reams and reams of scientific material" gathered by the EPA under Obama to justify its rules somehow no longer apply. Because the new president says so doesn't count.

"Arbitrary and capricious" might as well be the Trump motto, but that 1940s law is far from the only challenge awaiting him. The bigger issue is that a number of legal precedents guide the EPA when it exercises its duties.

The biggest precedent is the 2007 Supreme Court decision determining that the EPA is required to regulate greenhouse gas emissions under the Clean Air Act, which defines any air pollutant as something that can "reasonably be anticipated to endanger public health or welfare."

That case was a response to the George W. Bush administration's attempts to wiggle out of its legal duty to regulate greenhouse gas emissions. During Bush's tenure in office, environmental groups and states sued the federal government, demanding they do their job and largely won.

Trump's task then is to succeed where Bush failed: In 2008, "worse than Bush at his job" might have seemed like a high mountain to scale, but Trump has shown in just a few short months in office that it can be done.

Spalding of the Sierra Club, while also cautioning that there are no specifics yet, did say that if the EPA rewrites rules to get "minimal emissions reductions," then it would be violating the stated goals of the goals of the Clean Air Act, which could open the agency up for litigation.

Christy Goldfuss, vice president of energy and environment policy at the Center for American Progress, said in a phone conversation that "based on the level of scientific information we have," it's highly likely that EPA rules that are less stringent than Obama's "will be challenged in court."

To have a chance of prevailing in court, Pruitt would need need to have a staff of "competent people . . . that understand the law and how to craft regulations," she continued. "What we have seen so far from this administration is a real struggle to work with the experts and the career staff."

"Administrator Pruitt can tear down these regulations only using the same process it took to build them," noted David Doniger of the Natural Resources Defense Council in a blog post.

Trump has promised to slice the EPA's budget and staffing, a choice Pruitt seems to stand behind. Their reasoning for this is obvious enough: An understaffed EPA is not an agency that can protect the environment properly. Ironically, this might also hinder the agency's plans to rewrite a bunch of Obama regulations.

Writing new regulations that make plausible-sounding arguments to justify the EPA's skirting its court-ordered duties to regulate air pollution would be a difficult task under any circumstances. It will be doubly so in an administration that seems dedicated to cutting back its workforce and avoiding hiring people with actual policy expertise.

None of this is a reason for members of the public or environmental activists to become complacent. Pruitt is a clever enough lawyer, and the Supreme Court, especially with the likely addition of Neil Gorsuch, might be open to ludicrous-sounding justifications for the  Trump EPA to stop the battle against greenhouse gas emissions or drastically slow it down.

But the good news is that the lengthy process involved with such an effort would give the public plenty of opportunities to fight back against Trump's anti-environmental agenda.

“There's one thing I think it's important for people to know: They have an opportunity to be heard in this matter," Spalding said. "There will be a public notice, there will be a comment period and there will be at least one public hearing" on any proposed rule change that the Trump administration offers.

"We will use all the tools at our disposal to protect the current climate safeguards at every step of this process," the NRDC's Doniger wrote, promising to provide "the strongest possible legal and scientific arguments" for why any proposed new rules to weaken environmental protection would be illegitimate and to help organize ordinary Americans to fight back.

If the president "issues final decisions revoking or weakening these vital climate protection rules," Doniger added, his group and the rest of the environmental movement would respond with one of Trump's favorite catchphrases: See you in court.