White House slides deeper into crisis: After Flynn's bombshell and the Nunes circus, Trump looks worse than ever

Devin Nunes tried to muddy the waters — but only made things worse. And now the ghoulish Michael Flynn is back 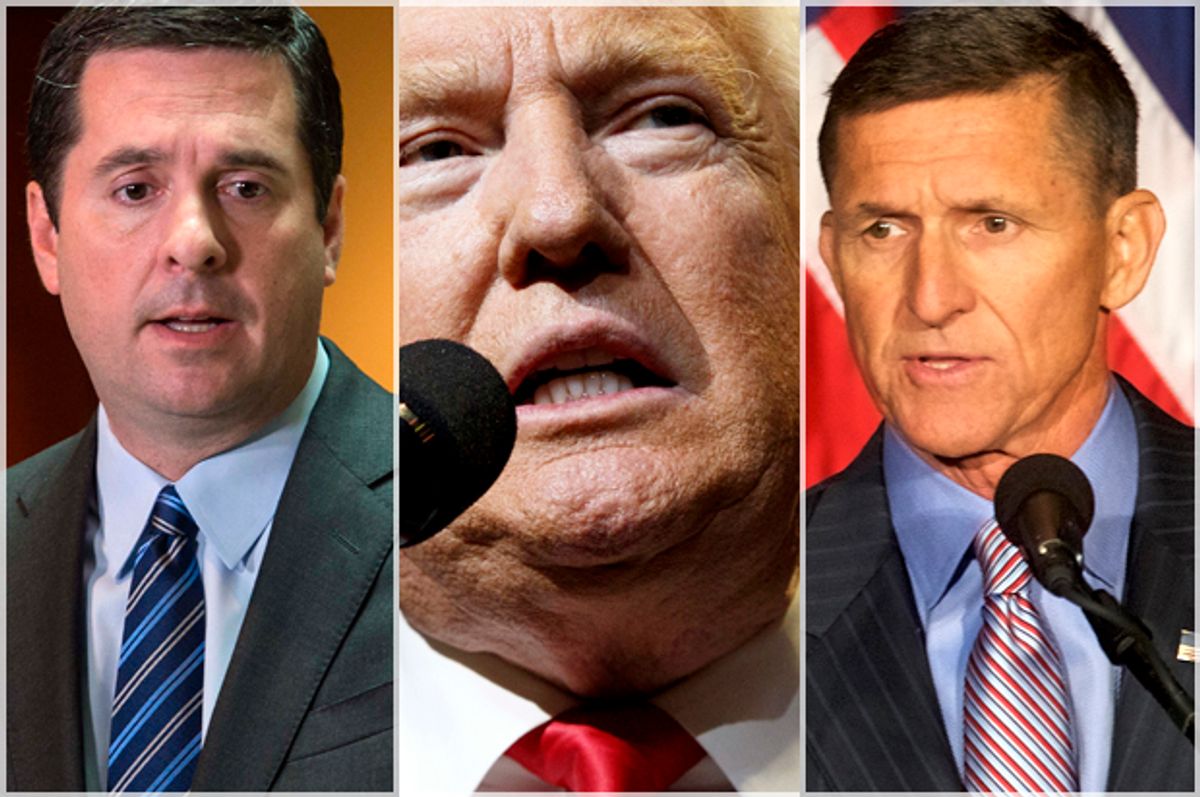 If the White House’s ongoing efforts to give cover to Donald Trump’s claims that the Obama administration really did “wiretapp” him become any more ham-fisted, the restaurant at Mar-a-Lago can serve them for Easter dinner.

First, a quick review. Almost four weeks ago, Trump accused former President Barack Obama of having wiretapped Trump Tower at the height of the presidential campaign last fall. Those accusations seemed to originate with a New York Times story about a broad investigation of links between Russia and people who had worked on Trump’s presidential campaign. Members of the right-wing media had taken that story, which said nothing about wiretaps, and embellished it as in the world’s dumbest game of telephone. Which led to Trump’s Twitter meltdown on the subject. Over the next couple of weeks, Trump held fast to his belief he had been wiretapped even as government official after government official said this was untrue.

Early last week FBI Director James Comey reiterated to the House Intelligence Committee that the alleged wiretapping had not occurred. At the same time, he confirmed the existence of a long-running FBI investigation of the links between the Trump campaign and the Russian government. (More on that in a minute.)

The next day Rep. Devin Nunes, the chairman of the House Intelligence Committee, announced that an unnamed source had leaked secret intercepts to him showing that the intelligence community had incidentally (and legally) collected information about Trump transition team officials from the election to Inauguration Day. It gradually emerged that Nunes had clearly received this information from White House officials in the first place — and then ran back to the White House the next day to show it to the president. Does that make sense? I didn't think so.

On Thursday The New York Times published a story identifying two officials of the National Security Council who provided Nunes with that intelligence. Furthermore, according to the Times, the agencies had not recorded Trump officials directly. Rather, foreign agents had been discussing their own efforts to open lines of communications with Trump’s inner circle, and the names of people close to Trump had shown up, unmasked, in these intercepts.

Nunes has spent the last two weeks looking for all the world like a man helping to hide something. First he ran off suddenly to the White House, on a solo "midnight run," to review the documents being leaked to him. Then he briefed the president before sharing what he learned with his own committee, which led his ranking Democratic member, Adam Schiff, to call for Nunes to step down. He gave awkward press conferences in which he gave the strong impression he was more concerned with protecting the president than in engaging in oversight of the executive branch. He canceled hearings with witnesses who might have shed some light on the Russian investigation. He gave Trump an excuse say he felt “somewhat vindicated” by Nunes’ findings — which, remember, had come from the White House in the first place.

Perhaps most importantly, Sen. Lindsey Graham, a fellow Republican but something of a Trump skeptic, said Nunes was running “an Inspector Clouseau investigation.” That had to hurt.

In some ways, the week's revelations may indeed help insulate the Trump team from suspicion that it colluded with the Russians. There is nothing remarkable about foreign governments trying to set up back-channel communications with the highest levels of the American government. Nor is there anything unusual about American intelligence services monitoring conversations between such agents. It does not appear that any of these intercepts suggest that Trump associates actually conspired with Russian agents to meddle with the election, as some have alleged.

All that happened, however, before news broke on Thursday night that Michael Flynn, who spent 27 days as Trump's national security adviser, has asked the FBI and Congress for immunity from prosecution in exchange for testimony about connections between Russia and members of the Trump campaign. So these NSC revelations leaked to Nunes may turn out to be an irrelevant sideshow, depending on what Flynn has to say — and whether or when he says it. So far there are no indications that any law enforcement agency or either congressional intelligence committee wants to offer him the immunity he seeks.

In any case, the White House has made its own situation worse. The Trump administration appears to have spent the last month bringing the resources of the national intelligence apparatus to bear on a project to prove to the president — and only to him — the correctness of his original accusation that he had been targeted by the Obama administration. This effort roped in two staffers of the National Security Council, who are unlikely to have done this on their own without direction from superiors in the administration, at least if they value their jobs. It roped in Nunes and his staff, to say nothing of his colleagues on the House Intelligence Committee, along with the committee’s staff. This can only be described as an enormous misuse of resources.

Although Nunes has said the material leaked to him by the NSC was not related to the Russian investigation, his actions and those of the White House have made it only more likely that the mystery of what, if any, ties existed between Russia and the Trump campaign will be closely scrutinized. Already the Senate Intelligence Committee has cranked up its efforts in this area, and is trying to convey a bipartisan and evenhanded tone, which Nunes' House committee so clearly lacks. Nunes’ incompetence has increased calls for an independent prosecutor to take over the investigation, since no one, including the committee he leads, trusts him to be impartial.

Essentially, in trying to compromise the Russia investigation by throwing a lot of chaff in the air to distract people, the White House has only compromised itself and now looks dirtier than ever. This incompetence would be funny if it was not occurring at the highest level of government.