Opiate for the masses: "Ghost in the Shell," "Iron Fist" and Hollywood's addiction to whitewashing 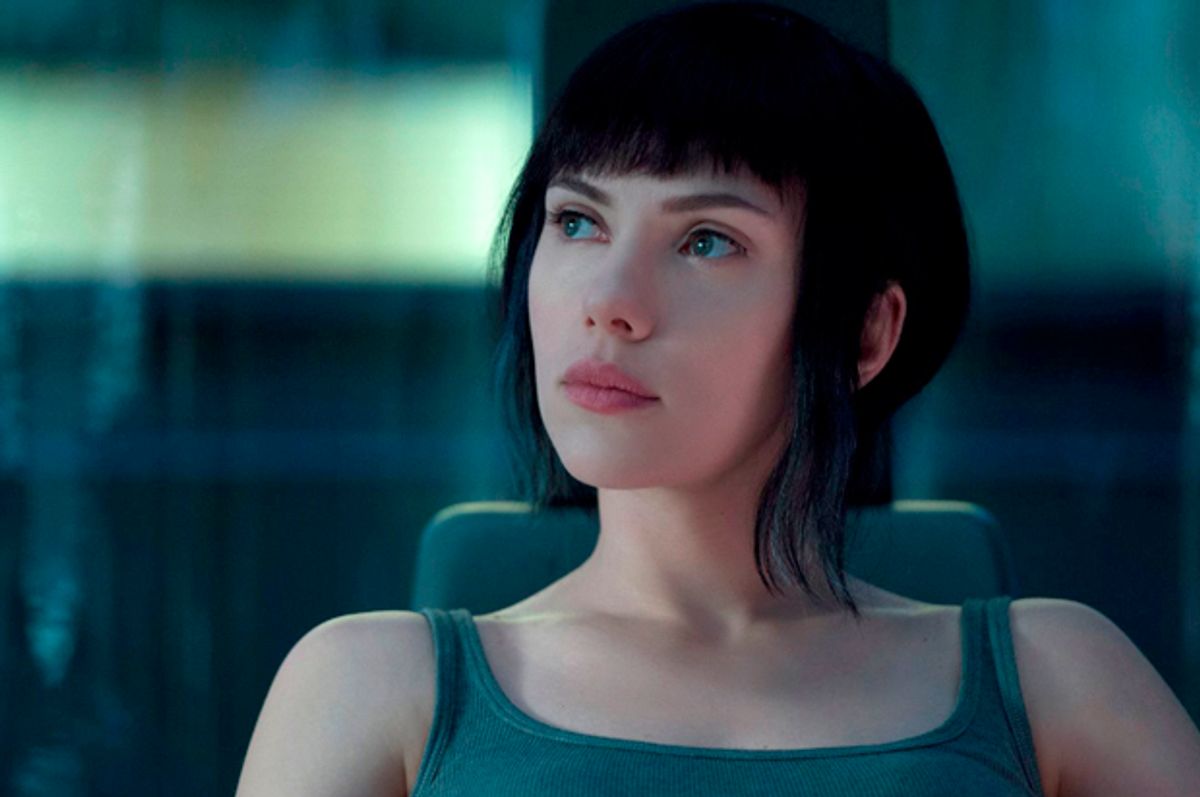 Scarlett Johansson in "Ghost in the Shell" (Paramount Pictures)
--

News flash: Scarlett Johansson is Japanese! I know, right? To clarify, she’s Japanese on the inside, according to the big reveal in the live action remake of “Ghost in the Shell.” The new film is based on Masamune Shirow’s manga title, which became an iconic 1995 anime film and inspired a 2004 TV series titled “Ghost in the Shell: Stand Alone Complex.” (It aired in the U.S. as part of Adult Swim’s anime block.)

In the new film Johansson plays Major Mira Killian, a cyborg law enforcement agent who was told that her original body was destroyed and her consciousness was transferred into a robotic shell. In the source material, the Major is named Motoko Kusanagi and, given that the story is set in a futuristic Tokyo, is presumed to be, you know, Japanese.

In the ScarJo version, the Major discovers that Mira Killian is a creation of the people who built her. Her brain is that of a Japanese girl named, yes, Motoko, an activist who spoke out about the government. In other words, while on the outside she appears to be full gaijin, on the inside she’s Asian. So when the actress told Marie Claire, “I certainly would never presume to play another race of a person,” technically she was speaking the truth. Only the Major’s face, skin and manufactured identity are white. Her “ghost,” though, is Asian —but featureless!

Perhaps Paramount thought that twist would negate the criticism it has faced from the moment it announced that Johansson, instead of an Asian actress, would play the Major. From a public relations standpoint, that was a massive miscalculation, although ultimately the box office returns will deliver the final word.

“Ghost” is merely the latest example of an Asian-originated or -themed property that features a white lead instead of an Asian actor. Right now Elizabeth Banks is playing the villainous Rita Repulsa in "Power Rangers," a film based on a series, which was popular on Fox in the '90s and that originated in Japan. (Miss Repulsa was originally played by a Japanese actress named Machiko Soga.) Last year in the film “Doctor Strange,” Tilda Swinton played the Ancient One. In the comic, the Ancient One is a Tibetan man. Swinton, as we know, is an androgynous British white woman. She attempted to talk it over with Margaret Cho, which did not come off that well.

In mid-March Netflix premiered “Marvel’s Iron Fist,” introducing the final Defender who will be included in its upcoming event series team-up: Danny Rand, a white guy who has spent years in the mystical land of K’un-Lun and earned the title of Iron Fist.

And in August, Netflix debuts its live-action version of the Japanese manga “Death Note,” starring Nat Wolff as Light Turner. The original character is named Light Yagami. The call for a boycott has already started.

While the furor surrounding “Ghost in the Shell,” “Death Note” and “Iron Fist” shows that Hollywood still hasn’t gotten its act together, a number of consumers don’t understand what the problem is either. To assist in a very small way, here’s a breakdown of a few of the more popular reactions questioning why all this matters. Let’s start with a few of the misconceptions about “Ghost in the Shell.”

“What issue could there possibly be with casting her?” Oshii told IGN. “The Major is a cyborg and her physical form is an entirely assumed one. The name ‘Motoko Kusanagi’ and her current body are not her original name and body, so there is no basis for saying that an Asian actress must portray her.”

He’s right. He’s also speaking from the perspective of a Japanese creator working in Japan. This is an American film, made in Hollywood. And here, we have a huge problem in terms of minority representation. According to findings released by the USC Annenberg School for Communication and Journalism, out of the top 100 films of 2015, 49 films included no speaking or named Asian or Asian-American characters. In another USC Annenberg stat from 2016, cited by actress Arden Cho, only 1 in 20 speaking roles go to Asian actors, and 1.3 percent of leading roles in films are played by Asians.

That’s a fairly strong basis for the argument that an Asian actress should have been cast as the lead character in a property of Asian origin being made for American audiences, don’t you think?

Most manga and anime characters have white features. Why shouldn’t they be played by whites?

There are many people who are better versed in answering this question than I am, but a blogger named Julian Abagond explained it well in 2010 in a widely cited post: “The Japanese see anime characters as being Japanese,” Abagond said. “It is Americans who think they are white. Why? Because to them white is the Default Human Being.”

That’s not just a cultural viewpoint, it’s also Hollywood’s go-to assumption. Returning to Oshii’s original point, if the Major’s physical form is an assumed one, that means she could be anything. Japan, however, is one of the most ethnically homogenous countries on the planet. It’s unrealistic, not to mention offensive, to posit that the default human form for a Japanese person would resemble Scarlett Johansson, any more than a shell for any of the Major’s male counterparts would be likely to look like her Lost in Translation" co-star Bill Murray.

That's also true. The actress has a proven track record in action films, having starred in Luc Besson’s “Lucy” and Marvel’s Avengers films. But what Asian woman has even been given a real chance at a lead action role in a major American production? There are quite a few who could have played the Major that could have satisfied fans: Devon Aoki, Rinko Kikuchi, Karen Fukuhara, Jamie Chung are just a few options I can think of off the top of my head. We will never know how well the film would have done with an Asian actress in that role because there’s no evidence that any well-known Asian actress was considered for it. We know that Margot Robbie’s name was floated around, though.

Lastly, to those who posit that movies starring people of color underperform at the box office, I have two words for you: “Hidden Figures.”

OK, but what about “Iron Fist”? Danny Rand is white in the original comics.

Sure is. He’s also a relic of an Orientalist streak that dominated '70s and '80s popular culture.

You’re probably familiar with the trend. Think of any film in which a white guy goes to an Asian country and studies the local martial arts — only the rarest, mind you. He becomes an expert, even better than his masters, and eventually returns to American soil to kick ass and sanctimoniously spout fortune cookie Confucianism.

Now, nobody should be indulging in the second bit, and the fact that Rand does this in “Iron Fist” is indicative of another gigantic flaw in the series; the writing is abysmal.

But long before the scripts were in — from the moment “Iron Fist” was announced, in fact — fans petitioned Marvel to hire an Asian actor to play the role. Marvel did closely consider Lewis Tan, whose father is  martial artist Philip Tan, for the role. The acting credits on Tan's IMDb page indicate that he has been working since 1990 and has many years of martial arts training under his belt.

Instead, the producers went with Finn Jones, a British actor best known to Americans for playing Loras Tyrell  on “Game of Thrones,” and who had about three weeks of rigorous physical training prior to production.

Let's review the match. Option A is an Asian performer proficient in martial arts, whose impressive skills can be seen in the following YouTube clip:

Option B is a skinny British dude who told the U.K. website Metro that he spent weekends in the gym “trying to keep up with being flexible and learning martial arts," adding, "But really, I was learning the fight scenes 15 minutes before we actually shot them because the schedule was so tight.”

Marvel chose Jones, and if you watch the abysmal fight sequences in “Iron Fist,” you'll see that was a terrible call.

The painful part is that given the way the world’s economy has evolved since the 1970s, Danny Rand, the son of a billionaire industrialist, could have easily been played by an Asian-American actor without really having to change the character at all.

But the insult doesn’t stop there. In “Iron Fist,” Rand befriends a martial arts master, Colleen Wing (Jessica Henwick), who enters cage matches under the moniker Daughter of the Dragon. As they get to know each other, Rand gives Wing advice on her form and attempts to teach her students without receiving permission. Remember: She didn’t ask for his input and, by this point, the viewer has already seen that his fighting skills aren’t worth a damn. In other words, Rand is automatically asserting his superiority as a white savior and a mansplainer. Well done, Marvel!

Presumably more American adaptations of Asian films, TV shows and literature are on the way, so there’s still time for the industry to take steps to include Asian actors in work inspired by their cultures. It makes both moral and business sense, and a few networks and film studios are acknowledging that by casting Asian actors in major roles. Michelle Yeoh will play a Federation starship captain in CBS Access’ upcoming “Star Trek: Discovery.” Ross Butler is a sought-after up-and-comer who’s starring in “Riverdale” and “13 Reasons Why.” ABC's "Fresh Off the Boat" continues to be one of the funniest series in its comedy block and one of the few shows on television that speaks directly to the first-generation immigrant experience. AMC is airing the second season of its martial arts epic "Into the Badlands," which stars Daniel Wu.

And just look at how excited people become when the trades announce that John Cho is doing, well, anything. (The latest: He’s joined Hulu’s “Difficult People.”)

There's really no defensible reason for Hollywood to continue whitening films and TV series at the expense of boosting worthy actors of color in lead roles, particularly Asian performers. Sadly, the industry probably will keep doing so, and each time its excuses will ring ever more hollow.