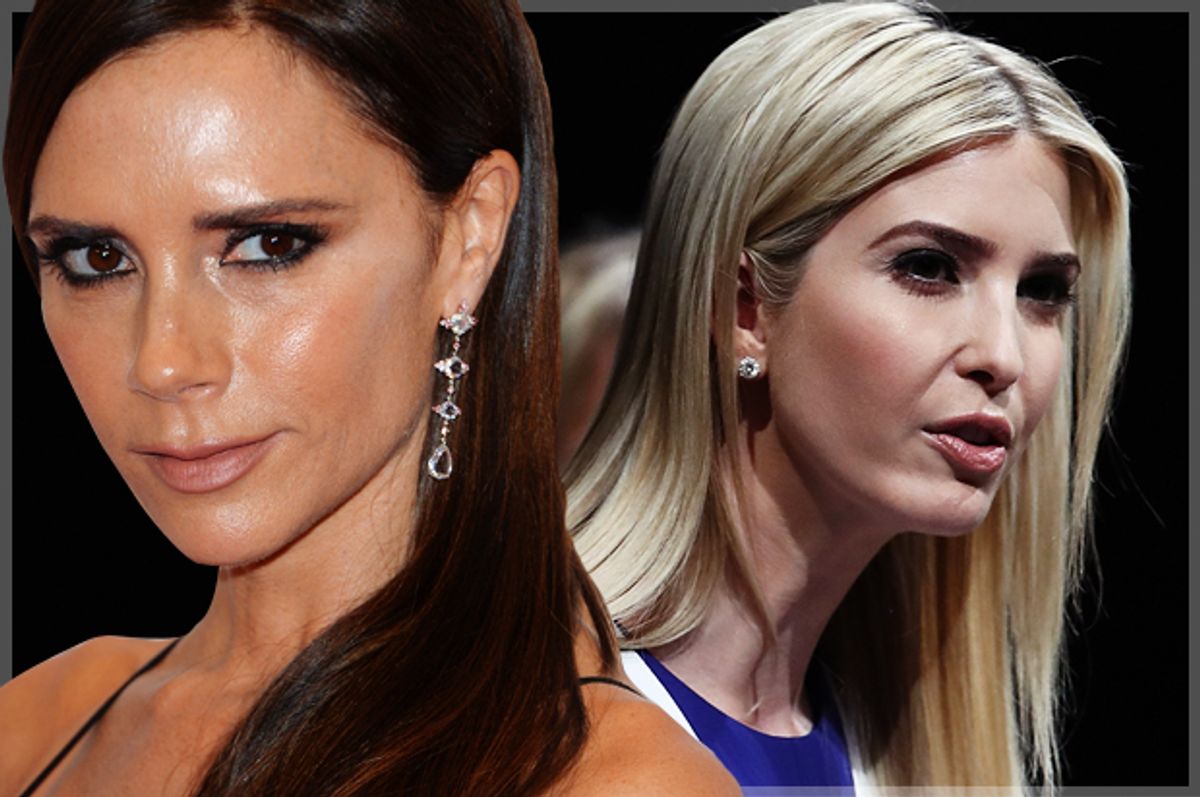 Behold the mothers and daughters filling a modern-day Versailles, its hedges forming a verdant fortress. Dark stilettoed and Mary Janed, they stand serenely regal, their black, flower-strewn garments reading "Easter Sunday meets Wednesday Addams." In another dreamlike advertisement, women ascend a desert hill-scape. One's color-blocked drop-waist dress gives a flirty nod to mod; yet another’s orange romper makes one long to steal a Sunkist (then peel it, slowly on the sands of a private beach).

Welcome to the world of Victoria Beckham’s new line for Target: 200-plus items for women, girls and babies. Set to be unveiled in early April, the collection is, in the designer’s own words, “influenced by all the experiences I’ve shared as a mother with my children.”

All the experiences? Even the childless among us may hazard a guess that this cannot be the case.

“Victoria Beckham gets real,” the latest cover of InStyle declared. On its foldout spread, the lifestyle heroine sits at an antique vanity, three little girls admiring a fourth who powders the icon’s nose. Of course, nothing could be less real than fashion — and that is exactly its appeal. At its best, fashion is fantasy that prompts broader, bolder imagination. At its worst, fashion is petty trend, consumption that panders rather than creates. Beckham is a mother of four and her Target duds seem duly transportive. So why does this particular line this particular spring feel so particularly . . . false?

Therein lies the rub that cannot be airbrushed. Be it Jessica Simpson’s edible body glitter of the early aughts or Gwyneth’s pious church of Goop, celebrity brands have been around for decades — the gilded life but a purchase away, seeming ever more accessible. “I want to design for women no matter their budget, age, or size,” said Beckham of her Target debut, a diffusion of her Victoria Victoria Beckham line. “I want to empower women and girls, and make them feel like the best versions of themselves.”

Right on, Victoria. Spice up our disempowered, middlebrow lives (preferably in a secluded green space). We’ve elected a monstrous narcissist to lead the free world and are losing our liberties day to day. At the very least, don’t we deserve a handsome bell sleeve?

But maybe we also ought to reassess our scruples. Just weeks after Ivanka Trump’s line was dropped by Nordstrom, Neiman Marcus, T.J. Maxx and other retailers high and low, the masses are swooning over Beckham bedecking our favorite box store. The same person who wouldn’t dare purchase an Ivanka clutch can drool guiltlessly over Victoria’s midrange ruffles. Because Victoria’s not Ivanka . . . right? And the Trumps are not the Beckhams. For one, they aren’t British. And second, the kids aren’t named after literary figures or a gentrifying borough. Third, one family sings and kicks a ball while the other builds towers and a giant wall. Plus, didn’t the Beckhams broadcast support for the Women’s March in London in January? (Then again, given how politically poker-faced they are, this could go to show how easily the protest turned trendy PR move.)

What both families have in common, above everything else, is being famous for being filthy rich.

And so what? Why can’t the left get over it this time and just let the super-wealthy be? The simplest answer is that Trump's rise to power is not simply the product of xenophobia and a disenfranchised white “underclass.” It is in no small part due to our stubborn worship of absurd wealth and public extravagance, emblematized not only by Ivanka & Co. but by the Beckhams as well. When the median middle-class income hovers under $50,000, while household debt exceeds $90,000, mimicking a figure who once caricatured the higher life (and in a time when many of us were posher off) seems more than a dash ironic.

At issue isn’t the clothes themselves; it’s the spirit in which they are celebrated. One recent listicle reads "22 Things You Need to Order to Become Victoria Beckham," as though her very selfhood amounts to an engraved vintage Rolex, a Byredo fragrance, a pair of Adidas trainers and other covetable goods. But lest we forget, she is now a designer, as is so often repeatedly emphasized — so maybe one of the 22 things one needs to order is admission to a top design school. “You know, I don’t even think of you anymore as that person,” said Tom Ford to Beckham on a flight to L.A., ostensibly a high compliment referring to her Spice Girl days. But maybe that wry performance of wealth is preferable to embracing it?

It would seem that along with the rise of Uber, Blue Apron, TaskRabbit and other outsourcing apps, lifestyle fashion lines sold at a lower price point offer access to luxuries previously unattainable for any but the richest consumers. “I don't reserve the term 'luxury' solely for products that are extremely expensive,” said financial expert Alexa von Tobel in 2015. “Instead, I consider luxury products or services things that make my life easier, more seamless, enjoyable and consumable that were not necessarily available to the masses.”

Under that logic, luxury itself has a new definition — the lure of the high life, attainable to all. But does that always better the general populace? Might it even distract from the fact that, more than ever, basic needs — housing, reproductive services, a route to legal citizenship — are ever more in jeopardy? Who cares about lost insurance coverage if your blouse is calla-lilied? Why fret about free birth control when the children you unwittingly spawn will look red-carpet ready?

Hyperbole aside, we are living in a time of political and cultural superlatives, with Trump clearly the coup de grace. “His brand mixes business and celebrity and beauty pageants and power and real estate and your name as big as possible,” explained photographer Lauren Greenfield, whose monograph “Generation Wealth” documents the past 25 years of American obsession with the mega-rich. “He represent[s] all the values . . . in their most extreme form — his addiction to attention and admiration and even his use of Twitter.”

It’s not that political consciousness versus consumerism is a zero-sum game; occasional indulgence in a silk-lined trouser isn’t going to blind one to reality. And there’s something to be said for the middle classes (including the plus-size majority) appearing well-heeled, no matter their dwindling pensions. But when the accoutrements of the hyper-rich hit the mainstream, the fact of their gratuitous wealth can fall out of sight. Lifestyle is more than a sleek tuxedo stripe or the shade of a suede throw pillow. It is access to quality health care, time to take a vacation, the option to retire without fear of financial ruin.

High fashion is of course easier to “democratize” than higher education. And it’s certainly more fun. But if even half the number flocking to Target the morning of April 9 are as quick to line up for this year’s local elections, wouldn’t that be brilliant?

When Missoni for Target launched in 2011, I stood outside the sliding doors in the rain, waiting for the store to open. With the focus of a surgeon and a nimbleness rarely seen since my days on the middle school obstacle course, I filled my scarlet chariot with as much knitted loot as I could. A delirious comeuppance consumed the aisles, each of our missions palpably just. At the checkout, I tallied my colorful wares and walked out feeling taller.

Six years later, a similar venture feels a bit sad — too “let them eat cake” for my taste (it’s doubtful Victoria does that anyway). Perhaps a perfect pleat is just the distraction Americans need right now. But is this the kind of pilgrimage we can afford, especially with our daughters? When the sun comes out this season, why not claim a new beginning — rather than wade in the waters of classless meritocracy, clad in faux designer suits?