Trump's assault on science ultimately rests on his hostility toward truth, an idea with a complicated history 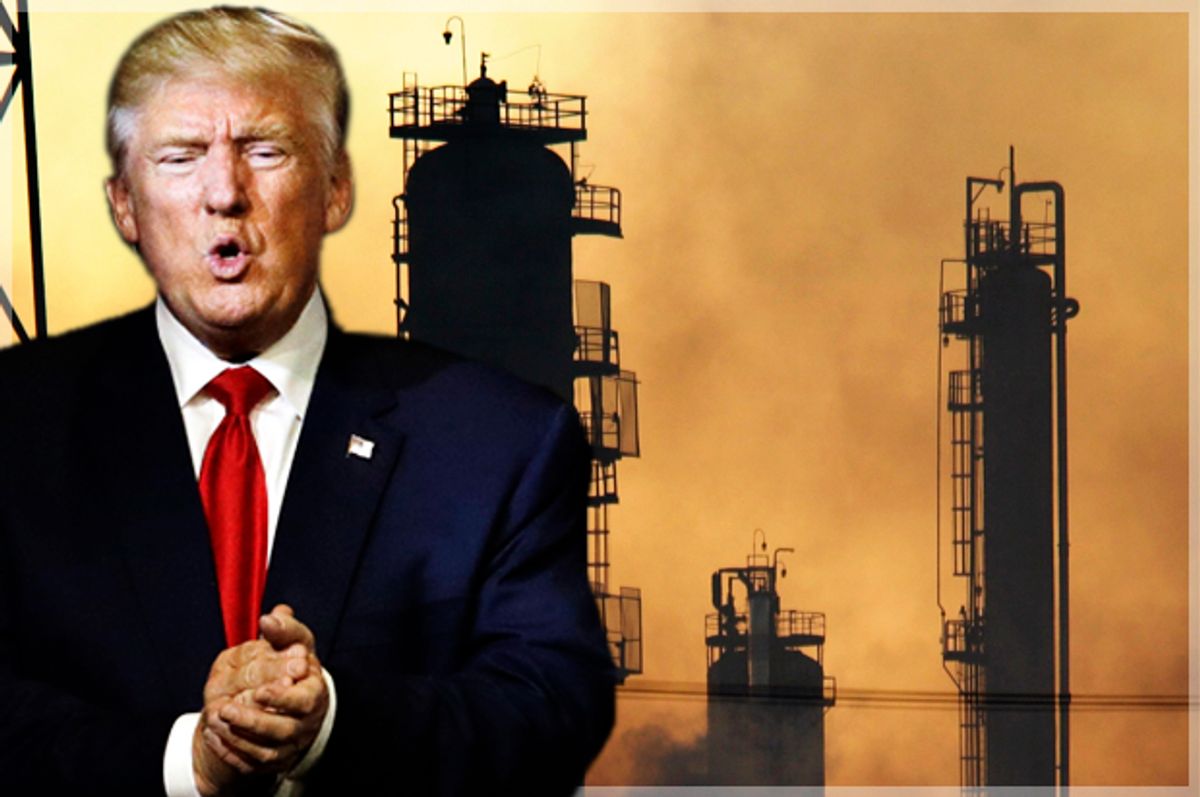 The Trump administration’s war on the environment, which was accelerated this week with the president’s executive order to dismantle various environmental protections, is a product of the administration's larger war on science, which is in turn a manifestation of President Trump’s unrelenting assault on the truth.

While "truth" and "objectivity" are endlessly debated in the field of journalism, no branch of human knowledge is more established on empirical evidence than the natural sciences, which seek to understand and describe the world through experimentation. One’s attitude toward the natural sciences and the scientists who dedicate their lives to research, therefore, can reveal a lot about one's attitude toward truth in general.

By now it should be obvious that Trump, who once claimed that climate change was a hoax created by the Chinese, has very little respect for the natural sciences. This week we learned just how little the president cares about the expertise of scientists, with a New York Times article reporting that the staff of the White House Office of Science and Technology Policy has been completely decimated since Trump entered office. This elimination of STEM experts from advisory positions is consistent with President Trump’s other anti-science policies, including his call for cuts to the EPA, NASA and NOAA, as well as his sweeping deregulatory agenda on the environment.

Trump’s hostility towards science and scientific facts like climate change is characteristic of his “post-truth” outlook, and his administration’s anti-science agenda is just one part of his larger crusade against objective truth.

This crusade has involved the president relentlessly attacking the media as “fake news” while simultaneously peddling false stories and citing genuinely fake news publications himself. He has been so successful at this that Time magazine came right out and asked it on its latest cover: “Is Truth Dead?” With same font and format as the magazine’s famous “Is God Dead?” cover from 1966, it includes a remarkable interview with the president, who manages to make about a dozen false, unverifiable or misleading statements in one sitting.

Whether deliberate or not, the cover headline alludes to the German philosopher Friedrich Nietzsche, who is best known for proclaiming the death of God, but also for rejecting the idea of objective truth (“there are no facts, only interpretations”). For the philosophically inclined, then, our “post-truth” era can be traced back to Nietzsche, as the lecturer in philosophy Alexis Papazoglou did last December in an article for the Conversation on the philosopher’s theory of “perspectivism.” According to Papazoglou, Nietzsche posits that, “once we realise that the idea of an absolute, objective truth is a philosophical hoax, the only alternative is a position called ‘perspectivism’ – the idea there is no one objective way the world is, only perspectives on what the world is like.” Papazoglou continues:

According to perspectivism, we agree on [basic facts, like that Paris is the capital of France] not because these propositions are ‘objectively true,’ but by virtue of sharing the same perspective. … but when it comes to issues such as morality, religion and politics, agreement is much harder to achieve.

While it is doubtful whether Trump has ever heard of Nietzsche — and even more doubtful whether he could get through one paragraph of the philosopher’s cryptic prose — the president is quite the perspectivist in his own crass and superficial way (much as he is a crude caricature of Nietzsche’s idealized Übermensch). In his Time interview, the president claimed to be a very “instinctual person,” which one can take to mean that he seldom questions his own perspective or feels the need to verify a claim that he feels in his gut before stating it as fact (even when, as president of the United States, he has access to top secret information).

If there are really no facts and only interpretations, and if millions of Americans are ready to unthinkingly embrace your perspective, then why bother adhering to a rigid line that separates fact from fiction? If you interpret a period of cold weather as evidence that climate change isn’t happening, and if millions of other people agree with your point of view, then climate change is a hoax. If your subjective experience perceives record attendance at the inauguration, then there was record attendance -- aerial photographs that prove otherwise are simply illustrating another perspective.

Nietzsche was a major influence on the French postmodern philosophers of the late 20th century, who adopted a similar perspectivist view of objective truth and rejected the “grand narratives” of the Enlightenment and modernism. (Not surprisingly, these thinkers do not have a good reputation in the scientific community; see the notorious Sokal affair). As a philosophical movement, postmodernism is mostly known for the contention that all human knowledge is a product of social constructions and competing narratives — including scientific knowledge, which is no more or less true than, say, Jacques Derrida’s theory of deconstruction.

While prominent postmodernist thinkers were almost all on the left, and used their theories to critique dominant ideologies and powerful interests, their work did not go unnoticed by those on the right. In an interview with the New Yorker last October, Mike Cernovich, one of the leading online personalities of the alt-right, discussed postmodernism and the importance of narratives: “Let’s say, for the sake of argument, that Walter Cronkite lied about everything. Before Twitter, how would you have known? Look, I read postmodernist theory in college. If everything is a narrative, then we need alternatives to the dominant narrative.” Like many other alt-right figures Cernovich made his name on Twitter, which has become an invaluable tool for promoting different “narratives,” whether it be climate change denialism or voter fraud conspiracy theories or fables of the deep state.

So the right has managed to successfully adopt a postmodern style of politics, where alternative facts counter objective truth and alternative narratives create a new, paranoid picture of the world. It is far from certain, however, that this kind of postmodern (or post-truth) politics is sustainable in the long run — especially now that Trump and the Republican Party are in control of the government.

Two and a half months into his term, Trump’s presidency has been nothing short of a disaster, and this is largely because the president has shunned experts who operate in the real world (like, er, scientists), while surrounding himself with know-nothing sycophants who dare not contradict his fact-free worldview. If Trump continues to govern as a post-truth president disconnected from reality, all signs point to an eventual collapse. Then again, it’s all a matter of perspective.