Trump's 30-year WWE love affair: Will the president continue to pull from a pro-wrestling playbook?

As a candidate, Trump emulated the bombastic style of a pro wrestler. As president, it might get him in trouble 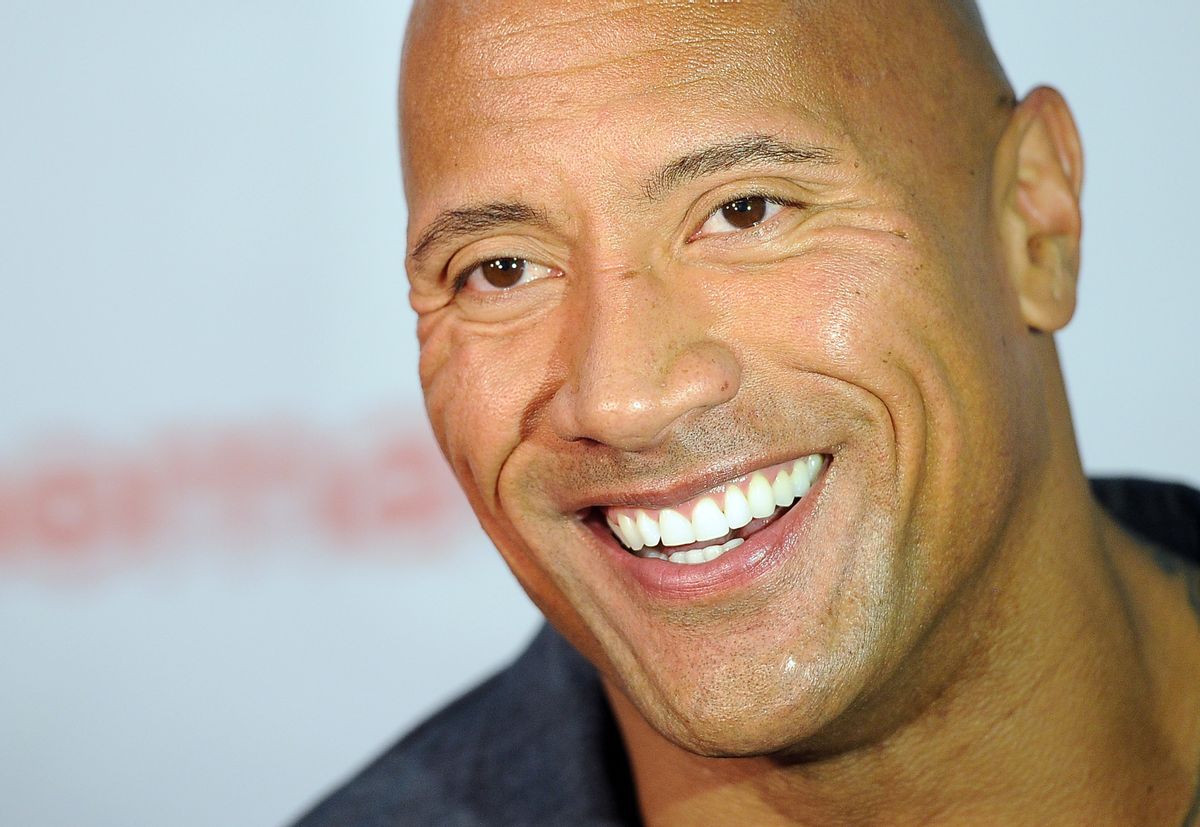 Dwayne Johnson, star of the upcoming film "Hercules," is interviewed before the Opening Night Presentation from Paramount Pictures at CinemaCon 2014 on Monday, March 24, 2014, in Las Vegas. (Photo by Chris Pizzello/Invision/AP) (Chris Pizzello/invision/ap)
--

During a panel at Harvard on March 7 on press and the presidency, political journalist Jessica Yellin described Donald Trump’s conflict with the press as “WWF, media edition: In one corner, Donald Trump, defending the anti-institutionalist position, fighting the elites. In the other corner, the media, defending their honor. We all know conflict does well with readers, with viewers.”

Yellin’s reference to World Wrestling Entertainment (the WWE, formerly known as the WWF) points to something deeper: the striking parallels between Trump’s political style and professional wrestling.

As a scholar who researched professional wrestling, I saw, in Trump the candidate — with his bombastic rhetoric and bravado — a distinctly pro-wrestling style. But now that he has transitioned from campaigning into an actual leadership role, can it translate into legislative action? Can he be a showman who also establishes legitimacy, builds alliances and delivers the goods?

In professional wrestling, two (or more) opponents stage a violent fight in front of paying spectators. Unlike competitive sports, pro wrestling is premised on telling the best story. As a performer it doesn’t matter if you win; what matters is the strength of the emotional response you generate from fans.

Matches are typically fought between a good guy (in wrestling parlance, a “baby-face” or “face”) and a bad guy (“heel”). Characters and storylines commonly revolve around age-old scripts about injustice, vengeance and good triumphing over evil — with violence always celebrated as a means to resolve conflict.

The American understanding of pro wrestling has come to be synonymous with the highly profitable and powerful World Wrestling Entertainment Corporation. The publicly-traded business, founded by Jess McMahon in the early 1950s, produces televised live events that are broadcast to millions of homes around the world year-round.

Trump doesn’t simply possess a performative style that resembles those of pro wrestlers. For years he’s been connected with WWE and has actually participated in several of their shows.

Atlantic City’s Trump Plaza hosted WrestleMania IV and V. In 2007 he performed in WrestleMania 23, attacking WWE CEO Vince McMahon in the “Battle of the Billionaires.” Two years later, he reemerged in a storyline in which he claimed to have bought Raw, WWE’s Monday night program, from McMahon, setting off another “feud” between the two.

His close ties to pro wrestling are such that he picked Linda McMahon, the wife of Vince McMahon and the former CEO of WWE, to lead his administration’s Small Business Administration.

Trump’s campaign kickoff certainly had a WWE feel to it.

On June 16, 2015, with Neil Young’s “Rockin in the Free World” blaring, he descended an escalator at Trump Tower before a crowd of onlookers — some paid — who flashed their cellphone cameras and waved signs.

The stage was smaller, and there weren’t any pyrotechnics, but the parallels were unmistakable. And after the opening bell, it was one brash pugilistic move followed by another.

He dispatched soundbite slogans and 140-character tweets that reduced complex groups and issues into simplistic stereotypes and remedies (“Build That Wall,” “Lock Her Up,” “Drain the Swamp” and, most famously, “Make America Great Again!”). Like the catchy slogans of wrestling stars — “You’re fired!” (Vince McMahon), “Rest in Peace!” (The Undertaker), “Know Your Role and Shut Your Mouth!” (The Rock) — the phrases can be easily remembered, even emblazoned on T-shirts, hats or signs.

During a rally in New Hampshire, Trump took a page directly out of the pro-wrestling playbook, working the crowd with an interactive call-and-response. Feigning the constraints of political correctness, he got a supporter to call Ted Cruz a “pussy” for not endorsing torture.

The in-ring action in pro wrestling is often a minor part of the drama. Behind the scenes, extensive backstaging, communications and props — from in-ring whispers exchanged with opponents to colorful tales of infidelity made by commentators — enhance the drama and optics. A two-hour WWE show often displays less than 15 minutes of in-ring physicality.

Trump utilized similar tactics, like when he brought a group of women who had accused Bill Clinton of infidelity to one of the debates.

His January press conference — which was supposed to allay concerns about his involvement in the family business — was another command performance. He enlisted paid staffers to applaud his answers, attacked a CNN reporter (calling the network’s coverage “fake news”) and covered a table with stacks of folders that were purportedly brimming with important business documents.

Finally there’s the “us vs. them” dynamic — which Jessica Yellin alluded to — that became central to Trump’s style and appeal. He identified and tapped into a strand of voter malaise — especially among whites — that few others saw, formulating a basic storyline that resonated: He was the underdog out to exact revenge on the powerful establishment — the political, business and media elites who had sold out the interests of the little guy in their embrace of trade deals, corruption and open borders.

Trump, on the other hand, would be their fist-pumping champion.

What happens when the show’s over?

Blurring the line between truth and fiction has always been at the heart of pro wrestling. Just like moviegoers, fans know that it’s an act. But for the sake of being entertained, they’re willing to suspend disbelief.

It worked in Trump’s campaign, but can this style succeed during a presidency? It’s difficult for a leader to maintain legitimacy when he’s repeatedly caught in lies, whether it’s the size of his inauguration crowd or the homicide rate being at an all-time high.

Moreover, some early decisions have directly contradicted earlier rhetoric. With Cabinet picks that have accumulated more than $15 billion in wealth, it’s difficult to see how Trump will “drain” the D.C. “swamp” of special interests.

In the end, actual policy will most likely make or break Trump’s presidency. He must be able to help voters and work with Congress to pass his agenda.

While wrestling stars usually appear invincible on screen, most of the work is bruising and far from glamorous. Aside from a small cadre of top WWE performers, most pro wrestlers perform for little to no pay in local venues before small crowds of devoted fans. They destroy their bodies, receive little, if any, healthcare and endure grueling schedules.

Although they face little physical danger, politicians also conduct extensive behind-the-scenes work that can be grueling and thankless. Successful politics requires building coalitions, consideration of opposing viewpoints, understanding policy and sitting through numerous meetings. Is Trump willing to put in such work?

The health of American bodies, interestingly enough, has been his biggest leadership test to date. In the weeks after the election, some Trump voters were surprised to find out that they really might lose their health insurance. Nonetheless, Trump made repealing and replacing the Affordable Care Act his first major legislative initiative. The plan — which would have cut the coverage of an estimated 24 million Americans — never even made it to a vote.

One reason could be that Trump and Congress spent only 63 days formulating and debating the legislation, compared to the year it took the Obama administration to advance and pass the Affordable Care Act.

While health care has captured headlines, significant threat comes from his proposed budget cuts, which will slash environmental, housing, diplomatic, educational and food programs, such as “meals on wheels.”

Like most forms of entertainment, the fans of pro wrestling want to get lost in the drama and yearn to be distracted from everyday life. Performers routinely get injured — and sometimes even die — yet the crowd is safe and removed from the violence.

With Trump, the tables are turned: He’ll likely emerge with his health and finances intact while the crowd bears the risk. If millions of his supporters realize the pain, they will soon be seeing him as a “heel.”

R. Tyson Smith is a visiting assistant professor of sociology at Muhlenberg College.